We spent our mandatory acclimitization day in Dingboche reading our books in the lodge and wandering around the village and surrounding hillsides. Like most villages on the EBC trail, Dingboche was nestled into a small protected valley, surrounded by imposing snow-covered mountains. There was little to the village of Dingboche itself, except for a few lodges, barren farmlands, and a cell-modem internet cafe. 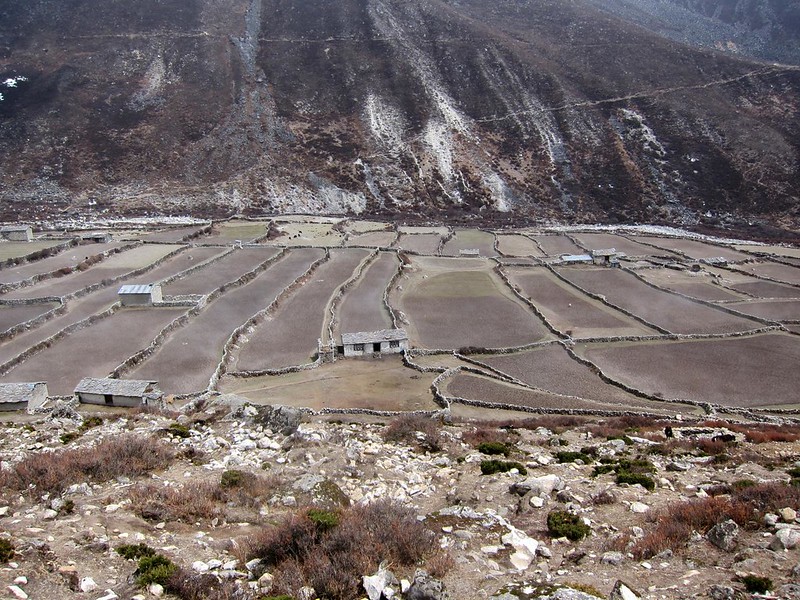 The views surrounding the village, however, were spectacular. 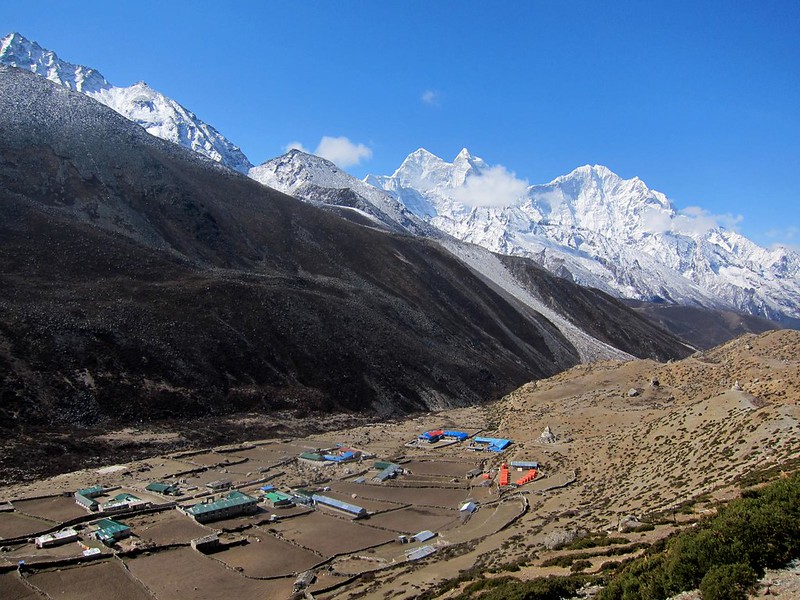 We made a quick visit to the internet cafe, where Scott and I both scrambled to check our email and let our families (and Scott’s work) know we were OK within our allotted 20 minutes of paid internet time. The computers were clunky old Windows computers with sticky and/or missing keys, but the internet was unexpectedly fast.

thanks for the emails mom!  im doing ok — still have the sinus
infection, but we are still moving up!  In Dingboche now (at 4,440
meters!), shold be at the top in 3 days.  I wont have internet after
today, so I will check in again once we are on the way back down!!
love yu so much, and dont worry, we are being so safe!!
love you….      ]

Hey mom and dad – Still on our way to Base Camp and all is well – we’re acclimatizing well and taking it slow. In Dingboche now (at 4,440 meters!), shold be at the top in 3 days.  I wont have internet after today, so I will check in again once we are on the way back down!! love yu so much, and dont worry we are being so safe!!

Talk to you soon – hug the kitties for us.

After leaving the internet cafe, we put out a half-hearted effort to do an “acclimatization hike”, in which we casually wandered around a small dirt hillside for 10 minutes, where we encountered nothing much but a somewhat surprised yet adorable yak munching on some dead branches.

Back in town after our grueling “hike”, we attended a presentation on altitude sickness that was being given by an English doctor who was currently stationed at one of the medical clinics nearby. She told us that there are two foreign-staffed medical clinics along the trail: one in nearby Pheriche and another one 2-days away at Everest Base Camp. Whereas we previously hadn’t known if there were any such medical services available on the trail, this information alone was enough to relieve us (or me, really) of our near-constant worry about acquiring altitude sickness. Although I had always known that a helicopter rescue was available, it was comforting to know that there was a less-serious (and less expensive…  heli-rescue would be $5,000 from this point) option available in a village nearby. She also reviewed all of the symptoms of altitude sickness and the full range of options that were available at the clinics (oxygen, full-body hyberbarric bags, adrenaline shots, among others). Medical services were free for Nepalis, she said, while foreigners were charged at cost.

Back at our lodge, we found a cozy semiprivate greenhouse with tables and benches, where we set up for some reading time and ordered a large cheese pizza (one can only eat fried momos for so many days). Although the cheese was unmistakably different than what we were used to (yak cheese!), the pizza was delicious and, most importantly, hot. After we moved back over to the main dining room (the greenhouse turned frigid after the sun fell behind the mountains), we noticed a hiking group that we had briefly spotted the day before. Unlike the Diamox-popping youngsters that were also staying in the lodge with us, this group seemed different. They were older and somehow seemed more serious (unlike the rest of us, they looked like they knew what they were doing). We wondered if they were perhaps on a summiting expedition, and if so, to where?

At dinner time, the lodge was packed with trekkers and hikers and their guides. We sat near one of the Nepali guides and struck up a conversation. His name was Rajiv Sumit and he had indeed ‘sumit’-ed Mount Everest before – six times, in fact. We got a kick out of his name, and immediately thought of Steph’s brother Rob back in the US, with his list of ironic inventor’s names – he would have loved this one!

“You’re the first person we’ve met firsthand who has summited Everest!” we exclaimed. He leaned in close. “Well that man sitting next to you is one of the greatest climbers in the world,” he said, motioning to the hiking group that we had spotted earlier. (We knew it!) “He’s summited several mountains much more challenging than Everest – most of the 8,000 meter peaks.” (26,000+ ft).

Curiously, we learned that Sumit’s wife was a PhD microbiologist, like me, and that she worked at a hospital in Kathmandu. Sumit gave us her business card and suggested that we ask her for a tour of the hospital after our return to the city. We never called her, however, since Sumit would still be on an expedition when we were in Kathmandu, and we figured that his wife might not appreciate his signing her up to be tour guide for the day. After dinner, we said goodbye to Sumit, who had wandered over to his group (probably to administer their daily dose of Diamox)!

We kept glancing over at the serious hikers, who were now enjoying a big bottle of wine– it looked so good, considering that we had decided to stop any alcohol consumption until we were on our way back down (apparently alcohol was bad for altitude sickness). Gradually, Scott got up the nerve to ask them where they were headed. Scott, as friendly as ever, leaned over to the closest (and unfortunately most gruel and rough-looking) member of the group and casually asked, “Are you guys on a hiking expedition?”

Nod from the rough-looking European.

“Ahh, nice. To where?” Scott continues.

The rough-looking European stared straight ahead, and in his best Alan Rickman voice, he grunted, “Lhotse.”

Offering us no friendly banter in return, he was clearly not interested in speaking to mere “trekkers”. Granted, he was probably tired of people not understanding the sheer difficulty and courageousness of climbing Lhotse (if they had heard of it in the first place). Afterall, Lhotse was only the 4th highest mountain in the world at 28,000 feet, with the steepest climbing face of its size on Earth, and very few successful summits (less than 400 to date). We understood its gravity but had probably been prematurely mislabeled as naive trekkers who believe that the one-and-only Everest is only true achievment of the Khumbu region. Too bad for us– we would have loved to have heard more about their expedition.

Shortly thereafter, we climbed into bed, hoping to get a good rest before our hard push to Lobuche in the morning.