Today was one of the most beautiful days of our journey. With each step we took away from Dingboche, we encountered larger and larger snow-capped mountains that were made all the more grand by the tiny villages dwarfed in their shadows. Where yesterday there had been scrubby bush to guide us, there was now only packed dirt and rocks lacking any vegetation. The trail had fallen away to large plains again, with a river gorge on one side (with tiny Pheriche in the valley) and mountains on the other. We saw very few other trekkers for most of the morning and were elated to be wandering alone through this big beautiful world.

[Steph, alone in the wilderness…] 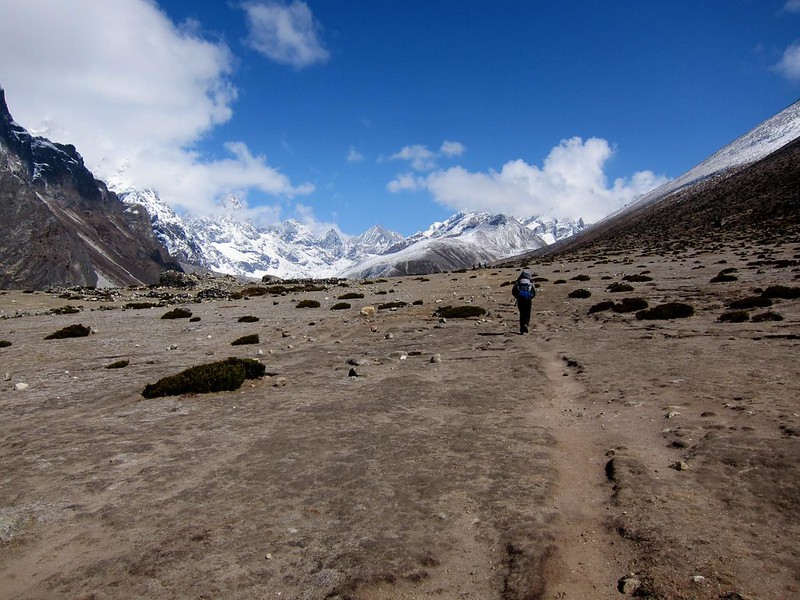 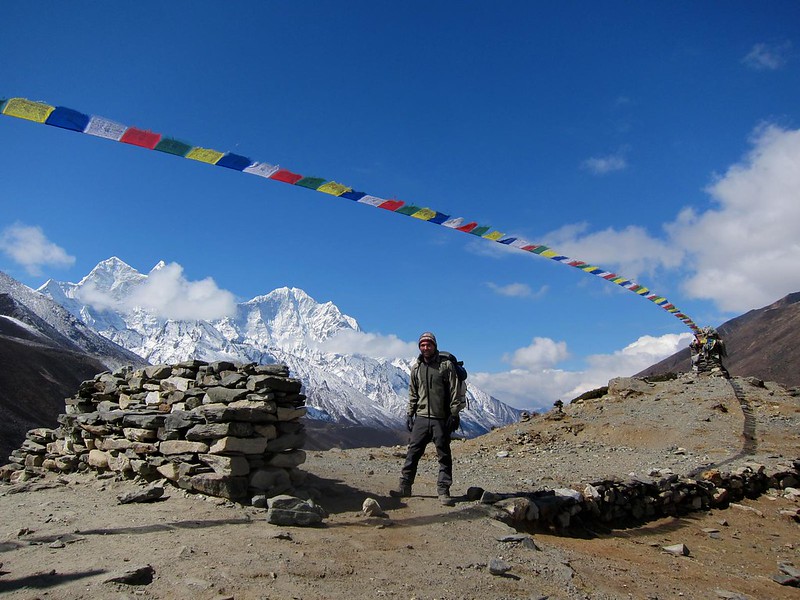 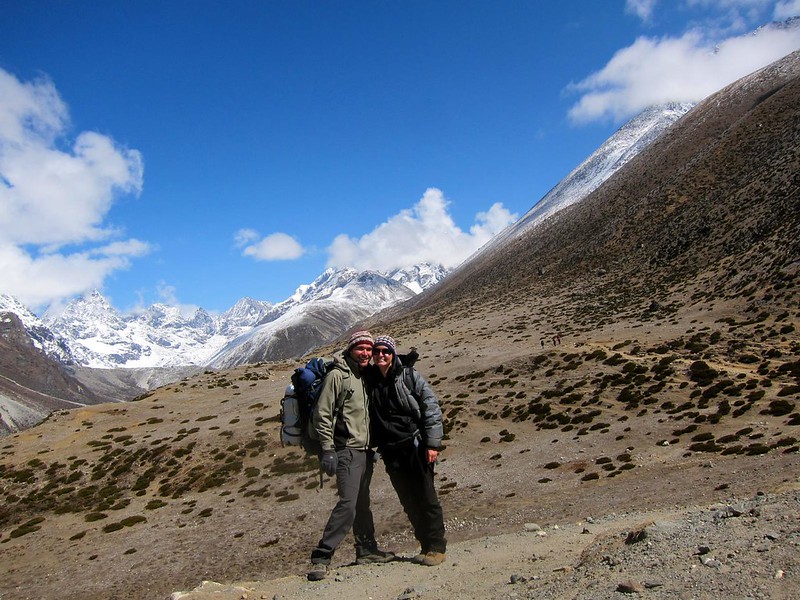 [Tiny Pheriche, bottom right, completely dwarfed by Ama Dablam and nearby peaks – still one of our favorite pictures from the entire trip] 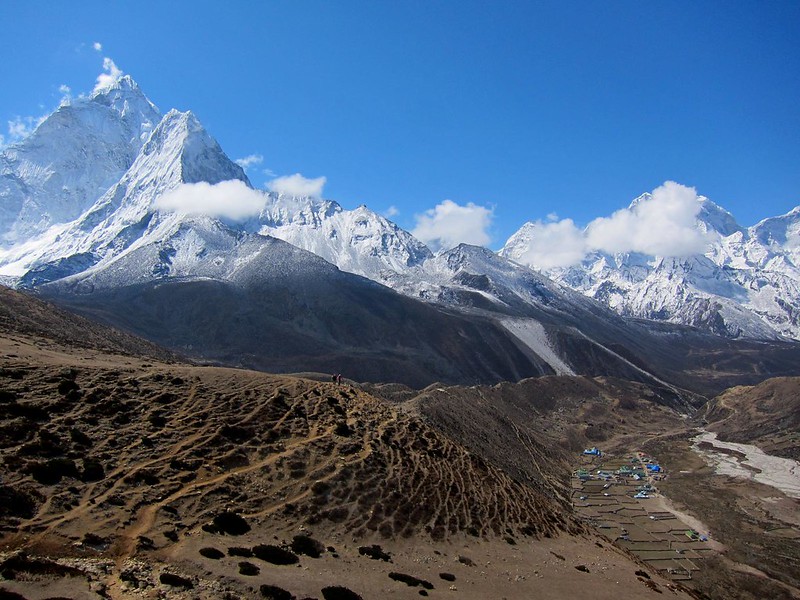 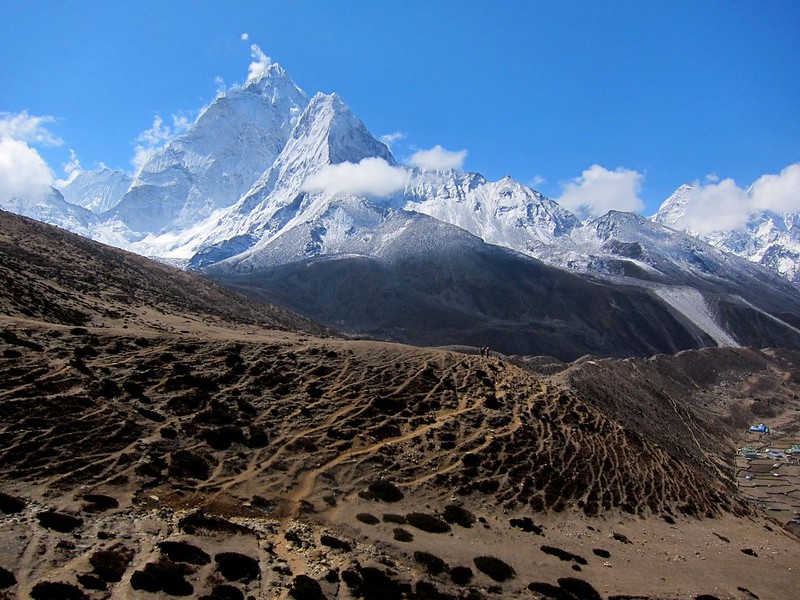 [A home? A resting outpost?] 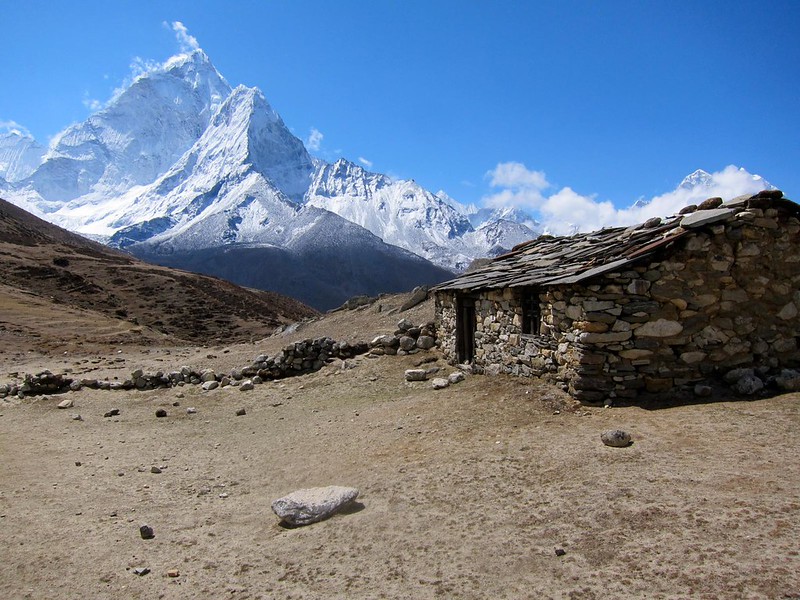 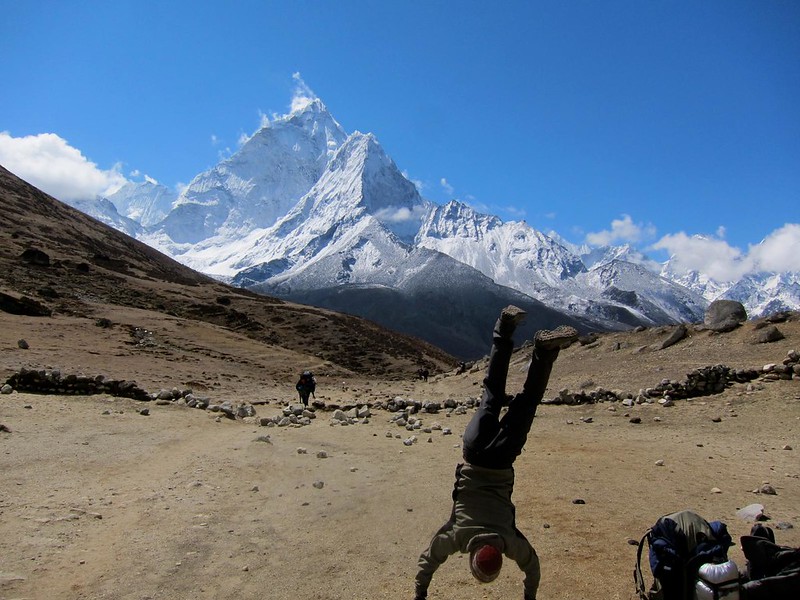 An hour or so into the trek, we ran into our cheery Zimbabwean friends from earlier in the trek. We told them that we were doing well but that I was still fighting a sinus infection that had not gotten any better. Their team leader was impressed I had even made it this far and offered to sell some (expired) amoxicillin to me. “You’ll take real medicine, right.. antibiotics?” – “Yes, I’m actually a microbiologist back home.” – “Gah, thank God… you wouldn’t believe how many hippies I encounter up here who insist on shoving some herbal gimmick up their butts instead.” 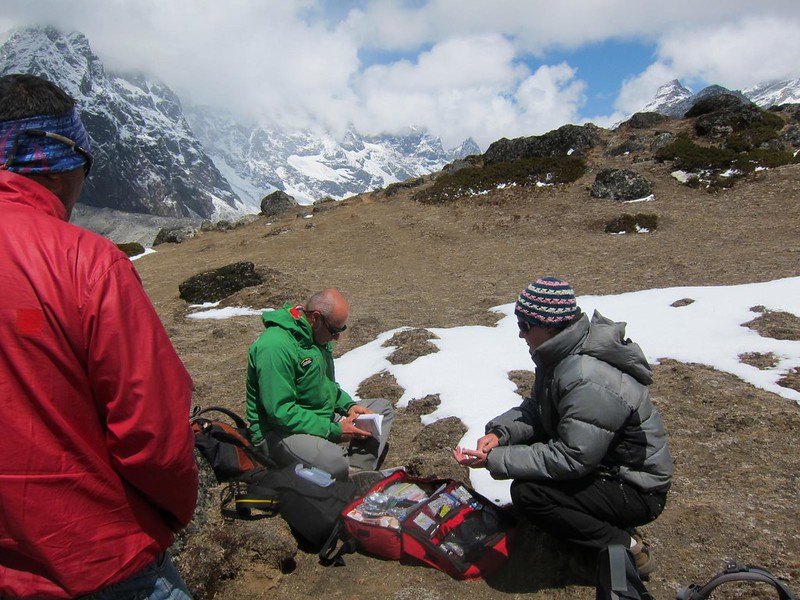 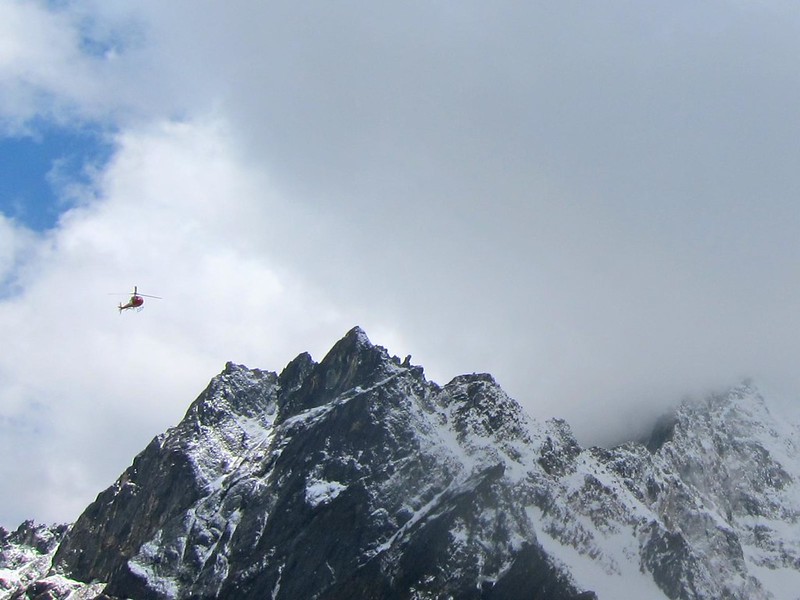 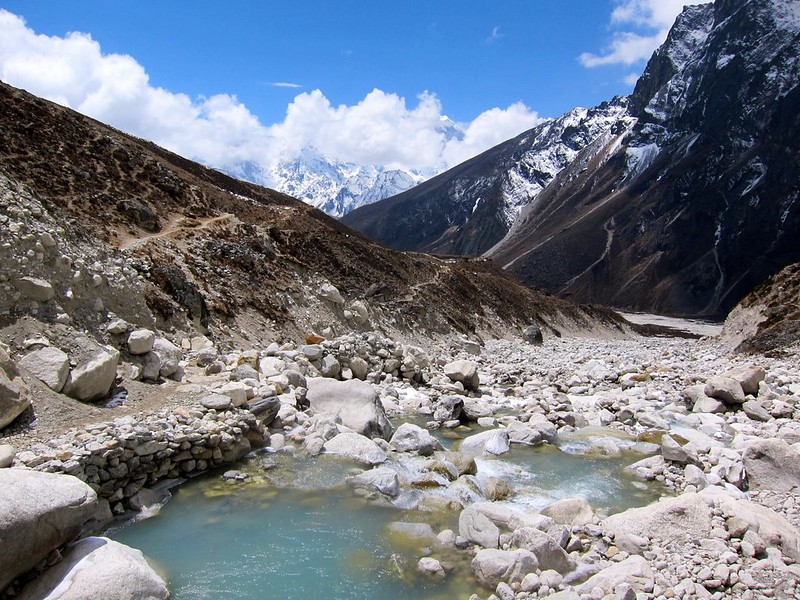 As we continued on toward Dukla, the village in which we planned to rest and have lunch, bad weather began settling into the valley, and we worried whether we would make it to our final destination for the day, Lobuche. 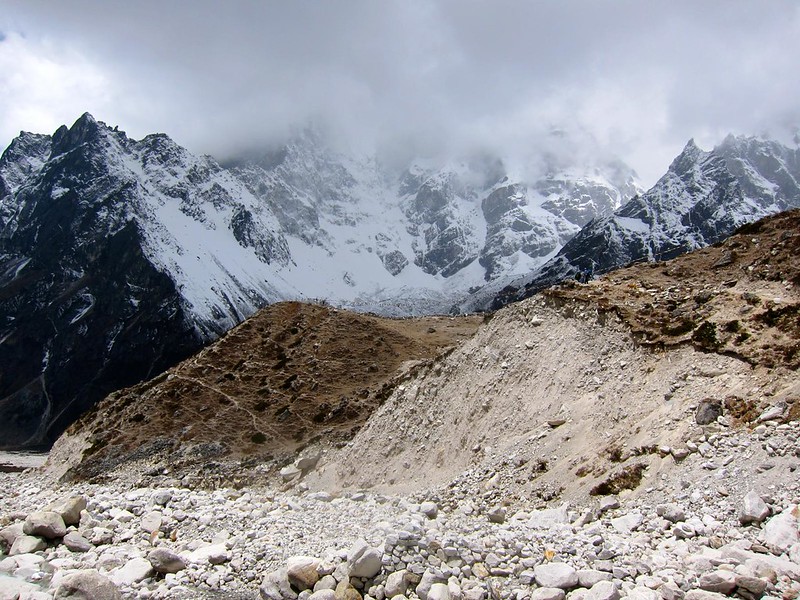 We reached Dukla after about 2.5 hours, where we had lunch and a nice rest at the Yak Lodge, the only building in town! 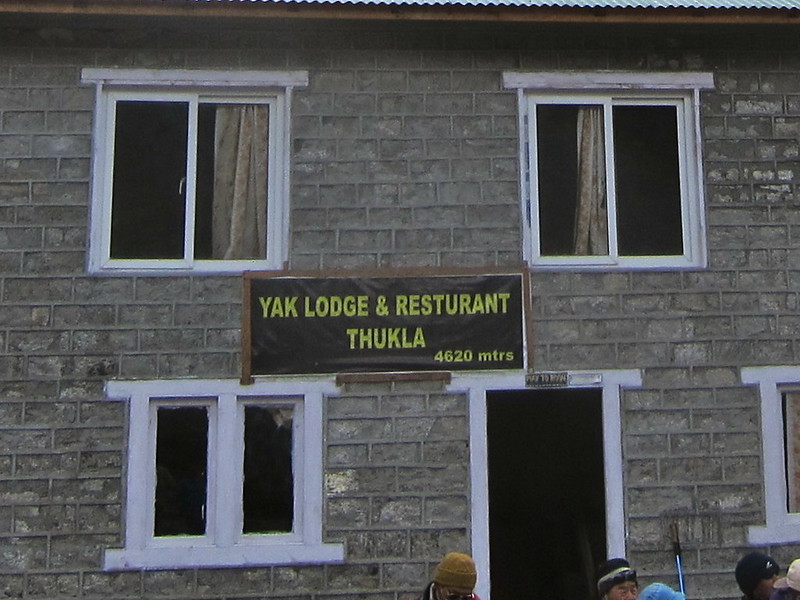 Across from us were two girls about our age. One of them, a pale, red-headed girl, was visibly in distress, laying her head on her friend’s shoulder and blinking slowly. We overheard her friend say that the girl had severe altitude sickness and would be airlifted by helicopter back to Kathmandu in a few minutes. My heart broke for her, as I reflected on just how mentally challenging the trek had been up until now; I couldn’t imagine turning back this far along. As we finished our meals of Nepali noodle soup, we heard the helicopter overhead and ran out the door to watch it land and take the girl away, back to Kathmandu. So close to making it to EBC… 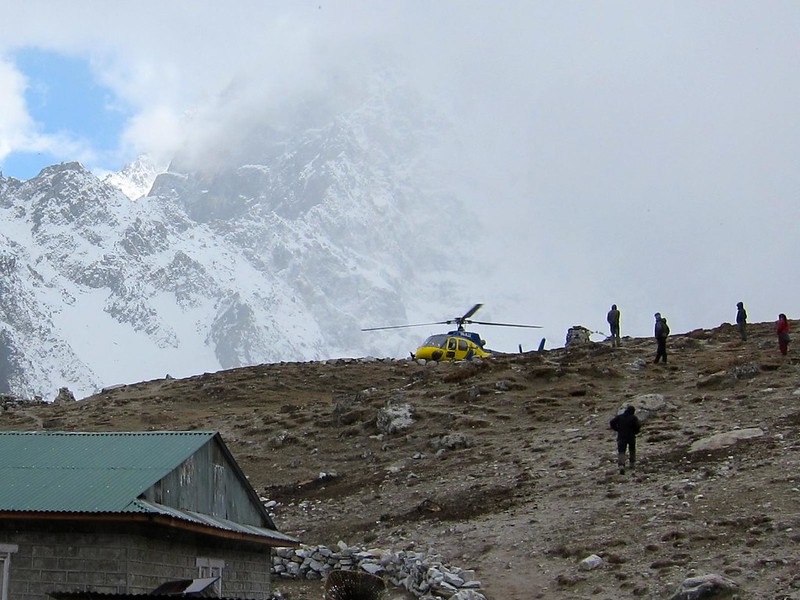 By the time we had finished lunch, I had almost convinced myself that I simply wanted to stay in Dukla– we were tired and the air was wet with drizzly rain. However, the daily chill of the trek had started to wear on us both emotionally and physically, and we didn’t want to add more cold nights if we didn’t need to. I was feeling the pull of warmer climes calling me back down the trail with every cold step forward that I took, and I knew I was nearing my limit. We would need to push on.

The next section was tough – 2 hours of uphill, winding switchbacks and bitter wind. We passed porters lumbering body-sized oxygen tanks for the summit teams at EBC, and even one guy carrying a western-style toilet on his back!

Luckily, after that very difficult climb, we were rewarded with some time spent exploring a valley with several memorials that had been erected; Nepali memorials were on one side, and those for foreigners were on the other. Probably one hundred or so memorials dotted the hillsides – there were notes left by parents and siblings who had hiked all the way here to pay their last respects to their children and loved ones. There were also larger memorials wrapped in Nepali prayer flags. We saw the memorials built for some of the more famous mountaineers who had died in the act of climbing Everest, including Scott Fischer and Rob Hall, members of the tragic 1996 summit expedition that resulted in the book “Into Thin Air,” and the IMAX Everest film (both recommended). 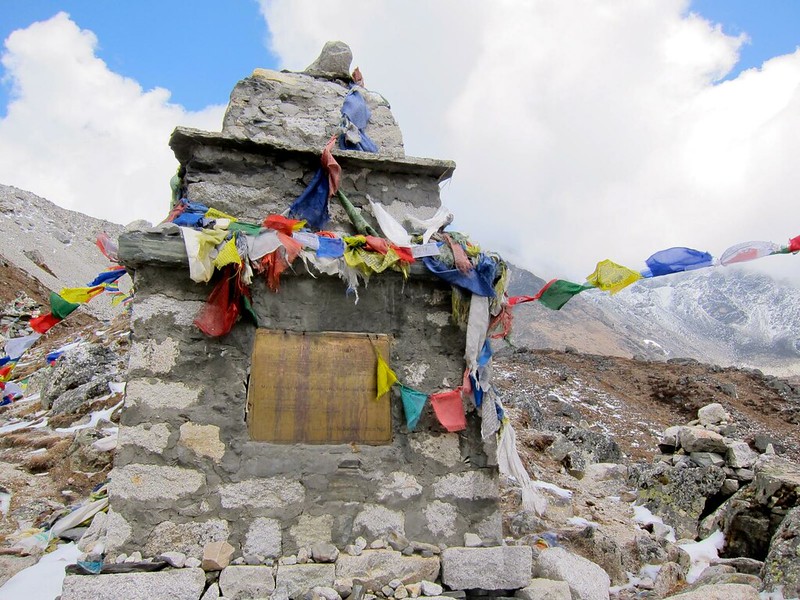 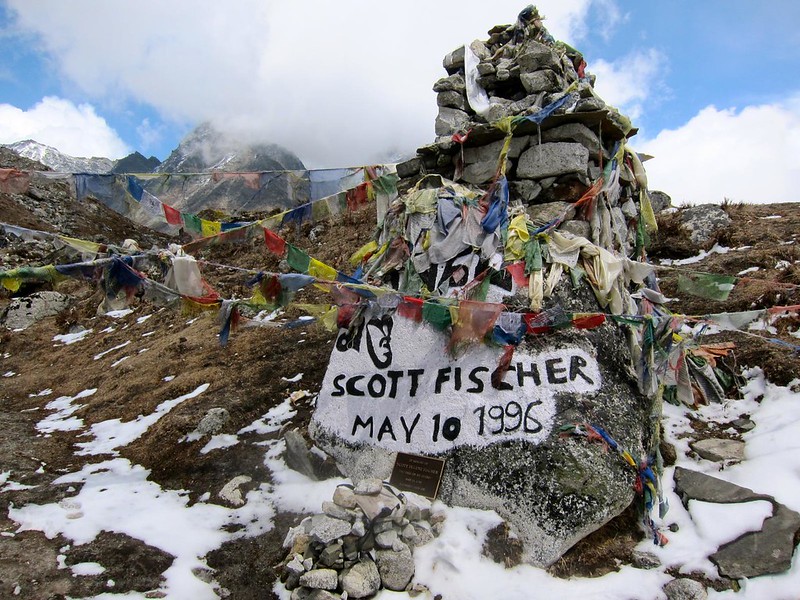 After a few minutes, we pressed on toward Lobuche, forever pushing ourselves toward the snow-capped Himalayas in the distance! 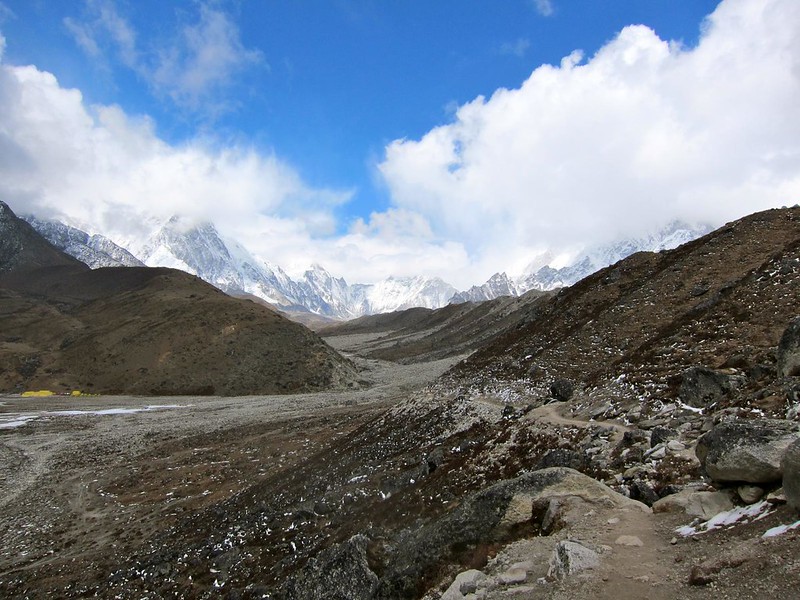 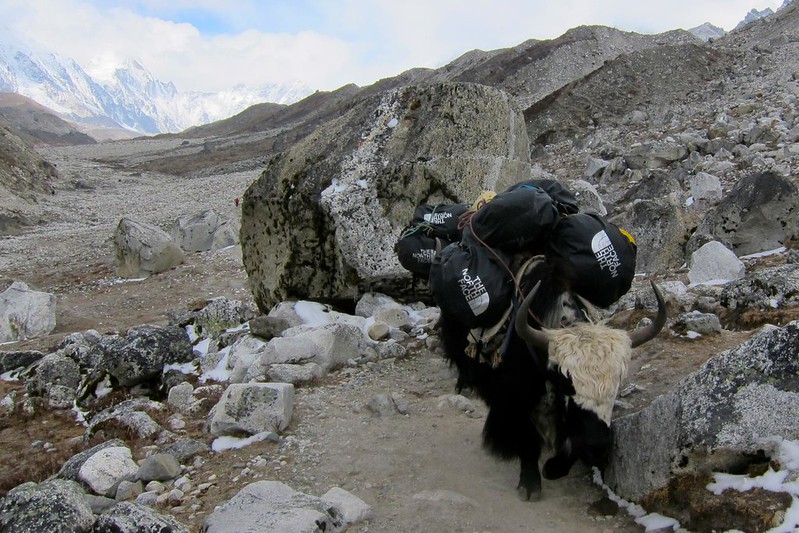 We reached Lobuche after about another hour of flat walking by mid-afternoon and collapsed into our room. Although I was happy to stop in Lobuche regardless of what my Wikipedia printout on the EBC trail said, Lobuche is a mandatory acclimatization stop for most trekkers. 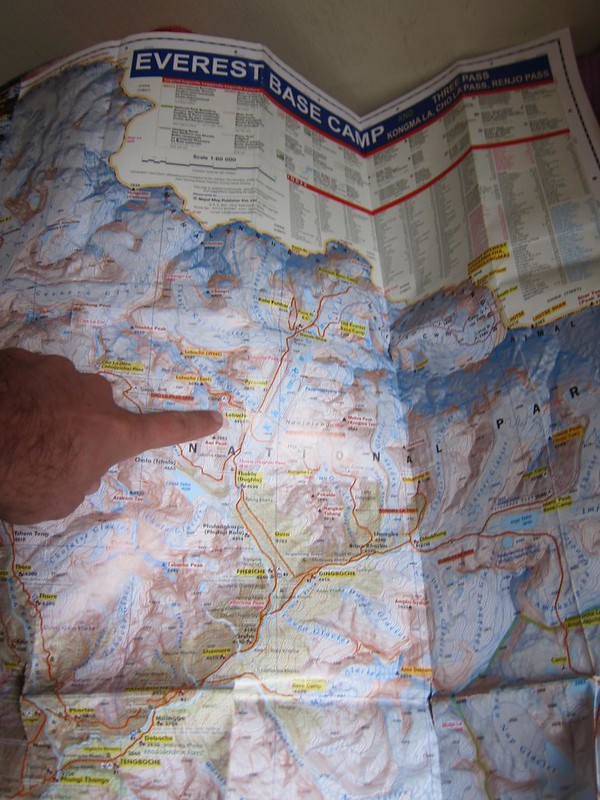 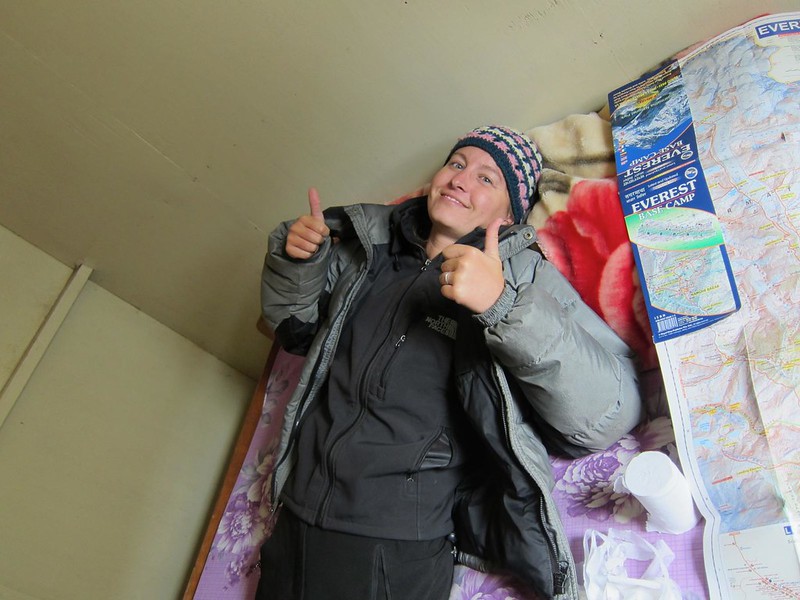 We tried to keep warm in the common room, but it was getting tough… [I have to laugh when I look at the following picture– I’m glad for posterity’s sake that I have it, but it’s clear that the cold, sunburn, and lack of shower (6 days now!) have not been kind…..] 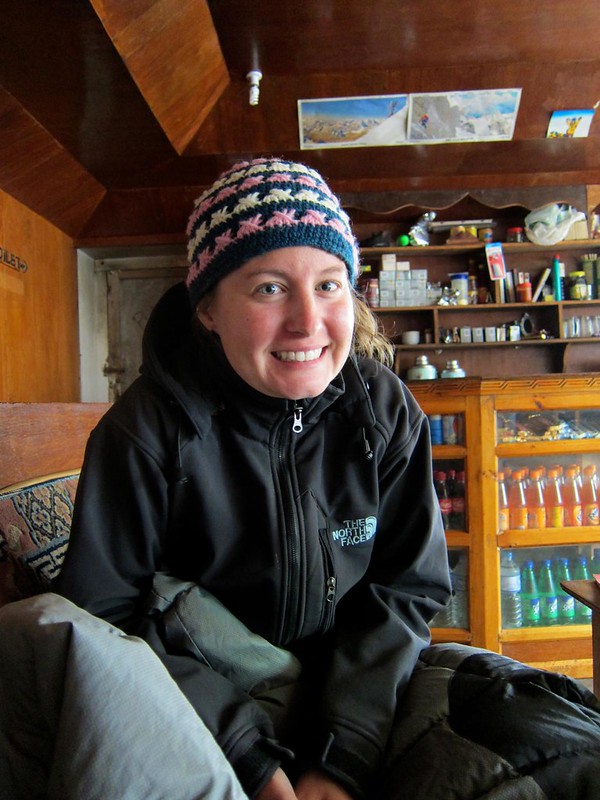 We ordered more Nepali tea and a big bowl of fresh hot popcorn, which quickly made us the most popular people in the room to the other trekkers. We eventually cozied up to the fireplace, where we took off our boots and tried to warm our tootsies, while we talked with the other trekkers who were also staying in the lodge that night (everyone had their own bowl of popcorn by then). They were Americans, and it was fun talking with people from places that felt like home, like Boston and even Alabama.

Sadly, one girl in their group started to feel dizzy and nauseas, and almost vomiting, feeling overcome with altitude sickness. Her friend tried to calm her, but we could see the fear rising in her eyes. She eventually decided that she needed to turn back– she was only one day away from Everest Base Camp, and she would never make it. Her friend bawled as the girl was escorted out the door into the dark night to be taken back to Pheriche over 3 hours away – another trekker, so close, but never getting the chance to finish.

Silently, we hoped that our own bodies would carry us through just one more day of climbing – tomorrow we would reach Everest Base Camp!