A sparkling sheet of snow coated the village of Pangboche when we awoke on day 7. We stuffed our bags and headed downstairs to the kitchen, where our host prepared us another breakfast of fried momos and sweet milk tea. I paid for an hour of charge for our cell phone for 300 rupees (about $3) and for our room ($3/night).

It was early as we began our trek out of town. The air was cold, but the lack of wind and the bright, clear skies made for fantastic hiking conditions. Although Steph was still suffering a head cold, she’d improved a lot since the day before. Bounding down the trail out of town, we were upbeat and thankful to be spending another day in such an amazing place.

[Our goal for that day was to reach the imposing mountain in the distance, Ama Dablam, abutting the village of Dingboche.] 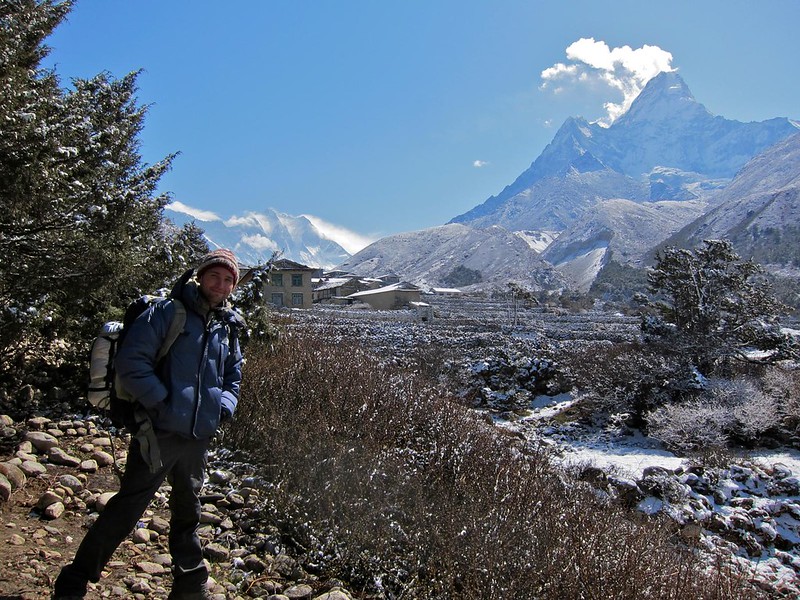 [Helicopter rescue farther up the trail.] 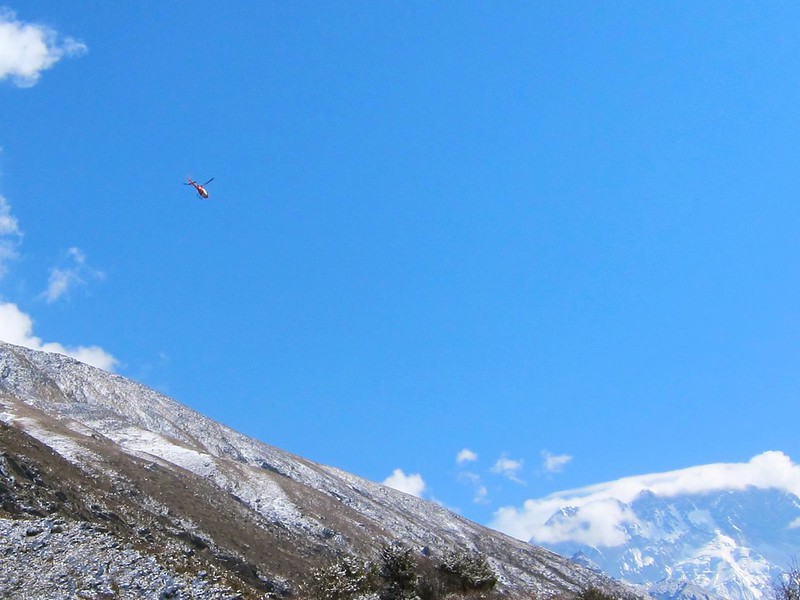 The beaten dirt path out of the village cut across the side of a wide valley with a glowing green glacial river flowing through its trough. We could see miles of the trail ahead, and it appeared as if we would follow this winding valley all the way to EBC. 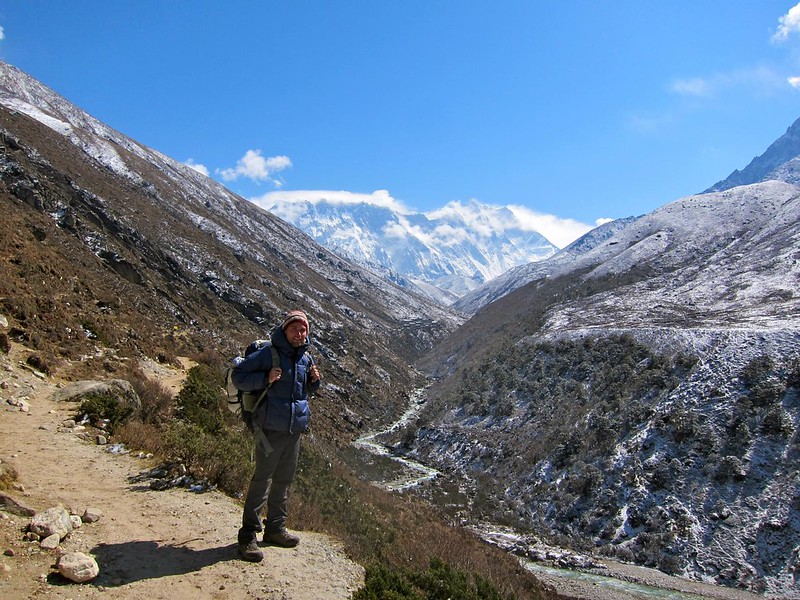 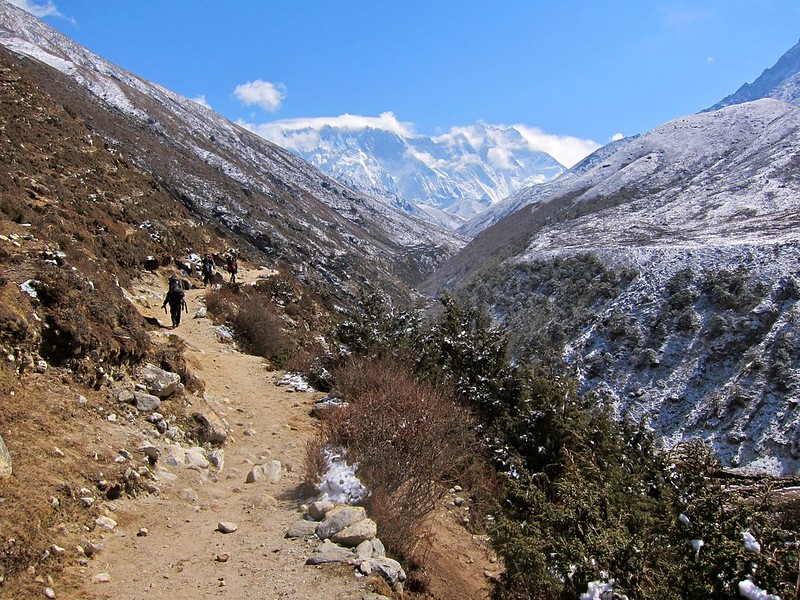 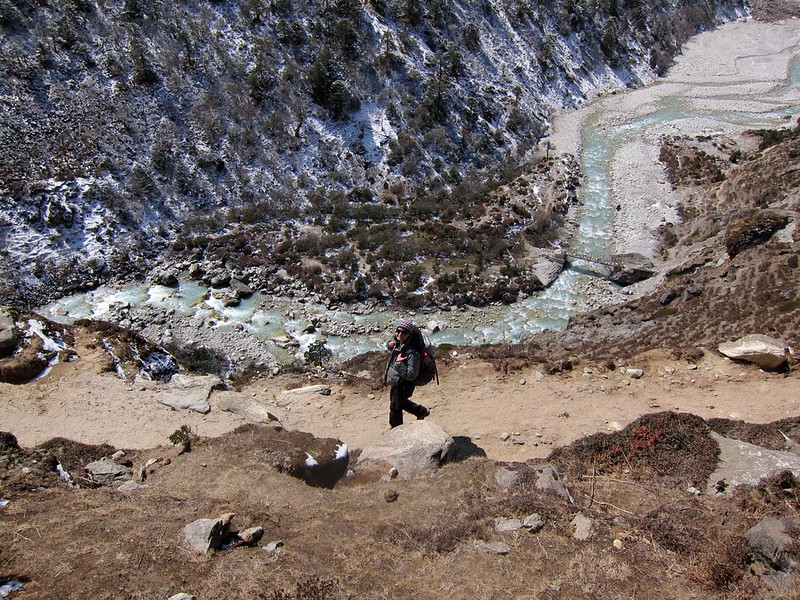 As we climbed, the landscape and vegetation had been gradually changing. We had reached the altitude at which taller trees stop growing, and all that was left between the patches of moss and dirt were smaller bushy shrubs. The harsher climate was noticeable in everything we passed, from the huge Tibetan yaks that were kept unshorn for warmth, to the Sherpa people we passed who maintained more stoic, wincing looks as they hiked past us (though we’d still usually get a greeting and a smile).

[This little guy looked so cold…] 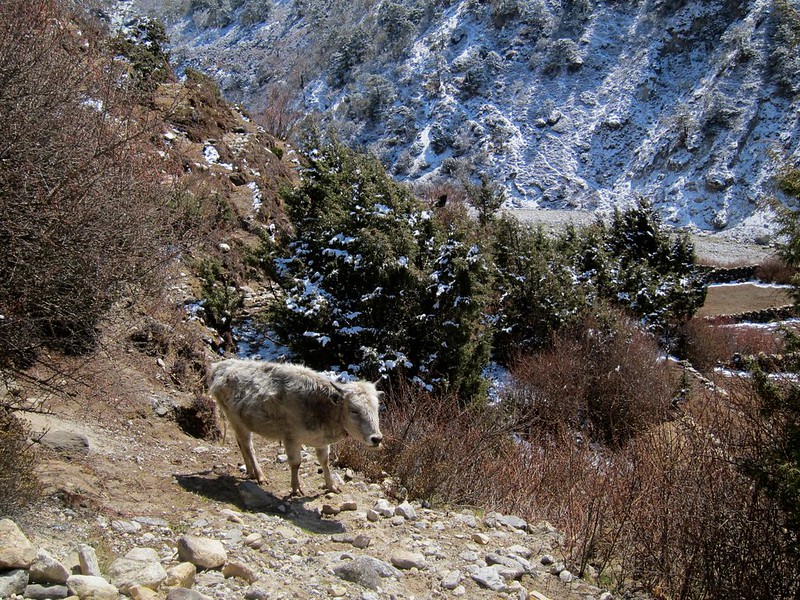 Along the way, we passed memorials to climbers and trekkers who had died exploring Everest in the past – an eerie reminder of the dangers of this incredible place. 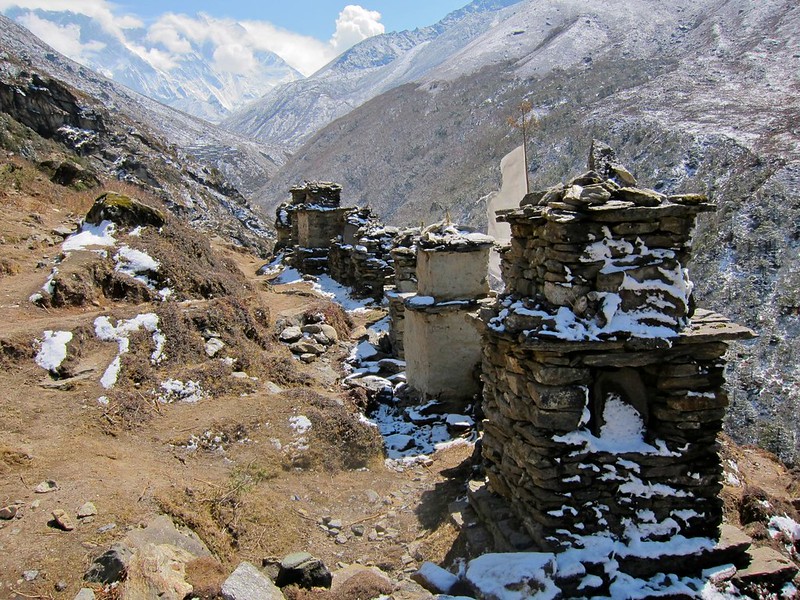 Although we only had 3 miles total to cover, we expected the journey to Dingboche would take us most of the day because we were increasing our altitude by another 1,000 ft. Steph started singing the “Do you know the way to Dingboche” song in marching step. After a couple of hours pounding down the trail with gear on our backs, we began to tire again.  We were routinely left in the dust by Sherpa porters carrying twice our weight on their backs. It was amazing to see just how comfortable people could be at 14,000ft; merely jogging in place for 10 seconds would render us breathless! 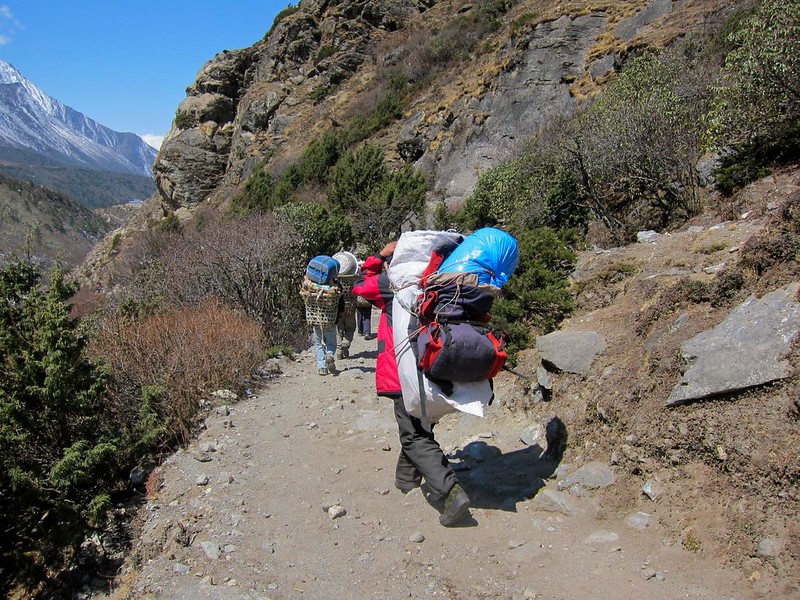 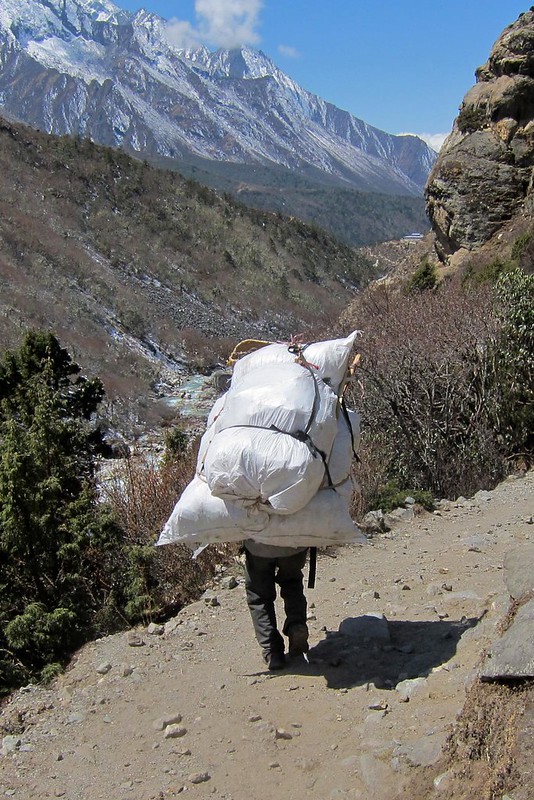 Our host the prior day, Ang, had recommended that once we get to Dingboche, we reserve a room at her friend’s lodge, the Snow Lion Inn. Ang had called ahead and confirmed a room for us. She gave us the hotel’s business card… only at this altitude do you see Helicopter Rescue advertised as a hotel ammenity! 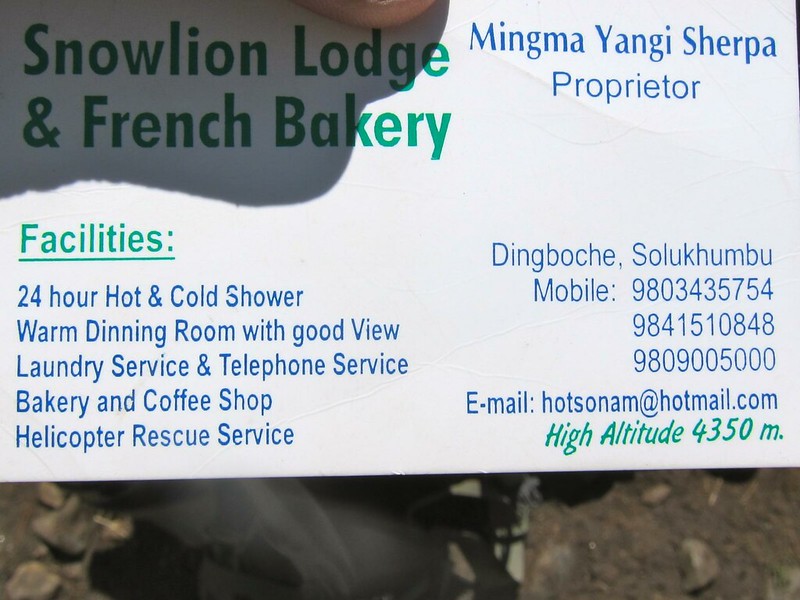 The trail on this day was noticeably more barren and deserted than in days past. Instead of a clear-cut trail, the path had widened to the size of a football field crisscrossed with water-made ruts from the previous year’s snowmelt. We were crossing over a wide plain, where we occasionally had to turn our backs to the wind to warm up and keep moving. We found a tiny hut that we leaned against for some much-needed relief from the cold wind and had another Snickers bar. After traversing the plain, we crossed over a small stream and came to a fork in the trail. Looking at our map, we guessed that ‘right’ was more likely to be correct than ‘left’, and we were sent up and around a large mountain (often needing to watch our step to avoid that dropoff to the river below to our right!).

More walking to do still, but we could see that we were approaching a small village in the distance. We were excited to have a place to stop, enjoy the views, and ask how far we had left to Dingboche. 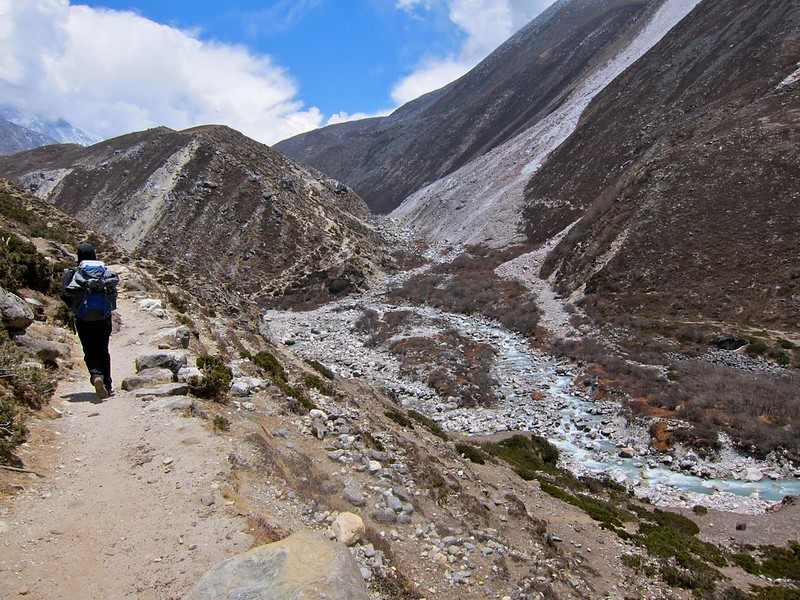 …But as we were pulling into the village, a big surprise: this village was Dingboche after all! We’d made it sooner than we thought. Pictured below, an exhausted Steph almost in tears at the site of a Dingboche sign. Hah! 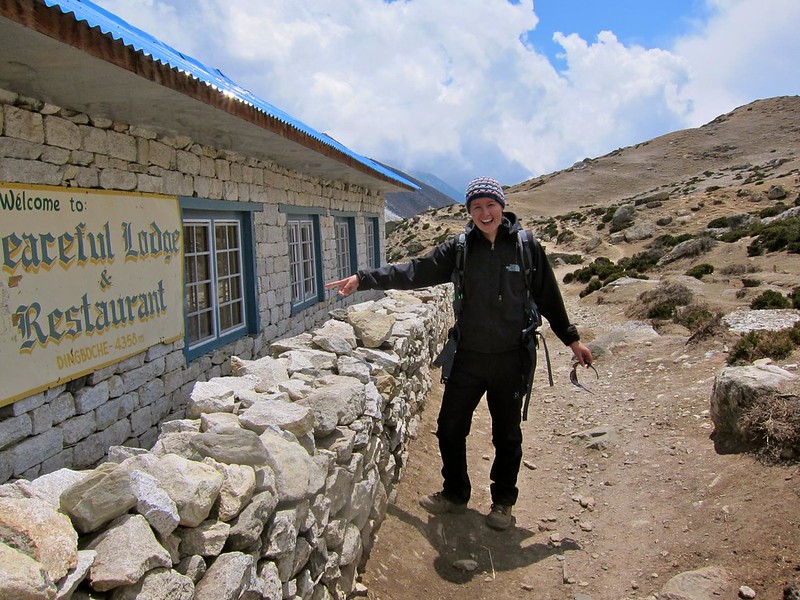 We found the Snow Lion Lodge on the outskirts of town and checked into our room. Similar conditions to the last room: a spare, unheated cabin room built out of plywood. Overall, it was growing increasingly colder and more uncomfortable, sure, but it was also getting a lot more fun. Our sense of adventure was back, and we felt like we were camping. 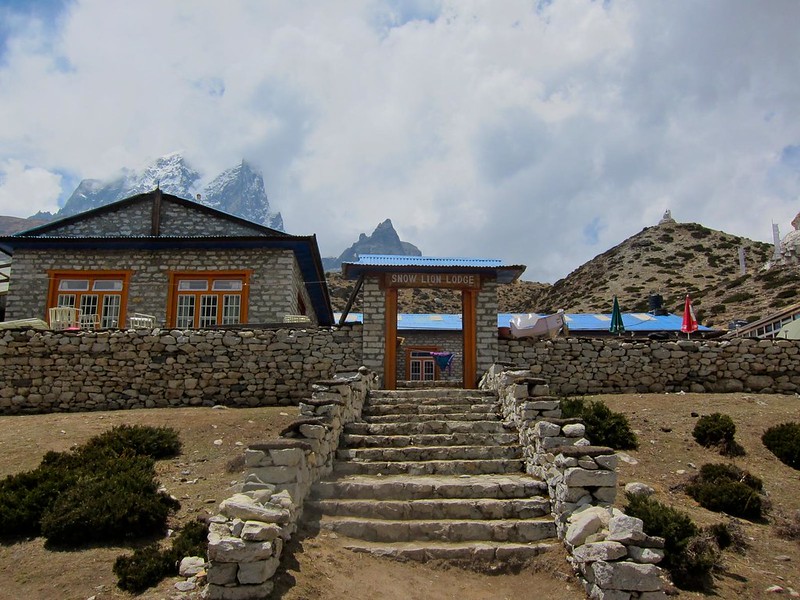 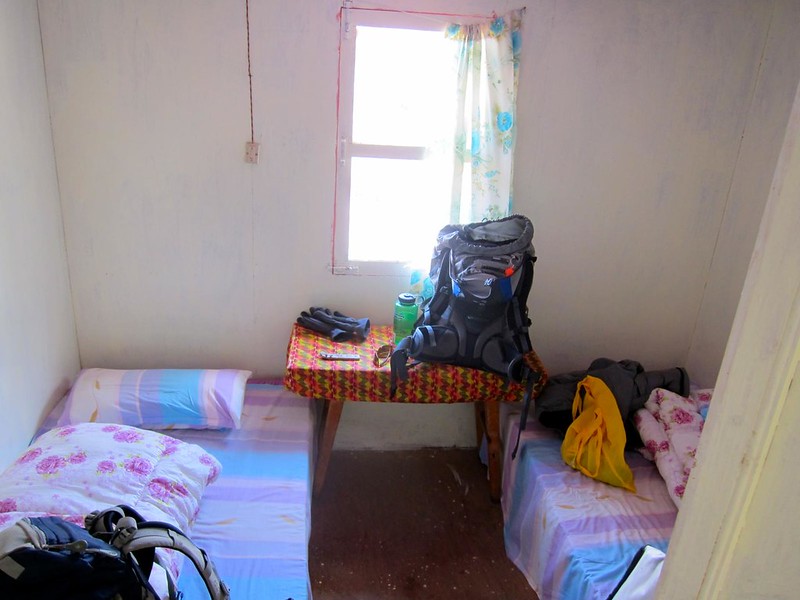 Posters in the lodge warning about the dangers ahead- we were getting close!

[Notice the yellow oxygen canisters in the photo below– the exact ones we had seen in Ang’s memorabilia case in Pangboche!] 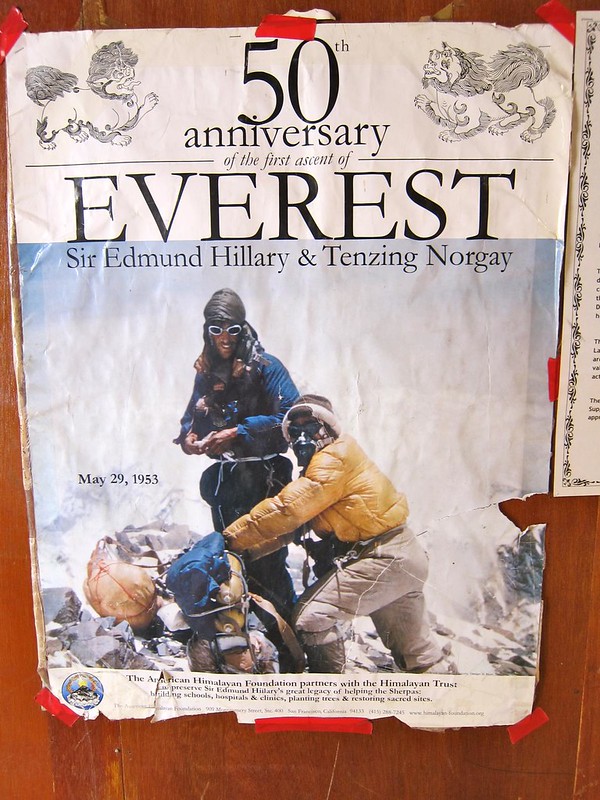 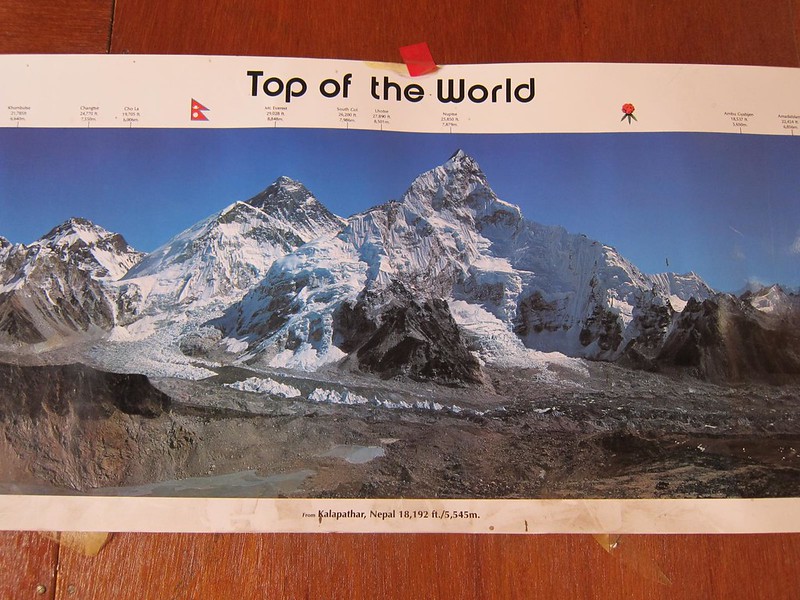 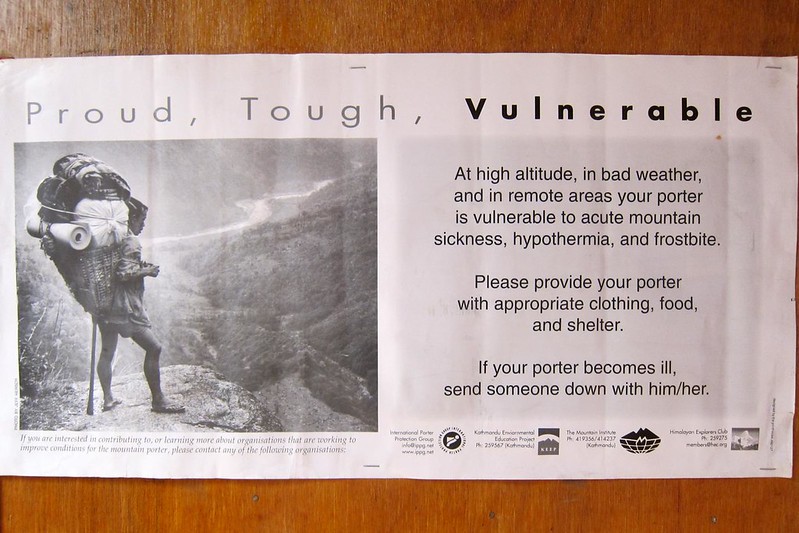 Our new host offered us tea in the wind-protected yard in front of the lodge where several women from the village were chatting, and we relaxed in some rare warm sunshine before settling in for dinner inside. 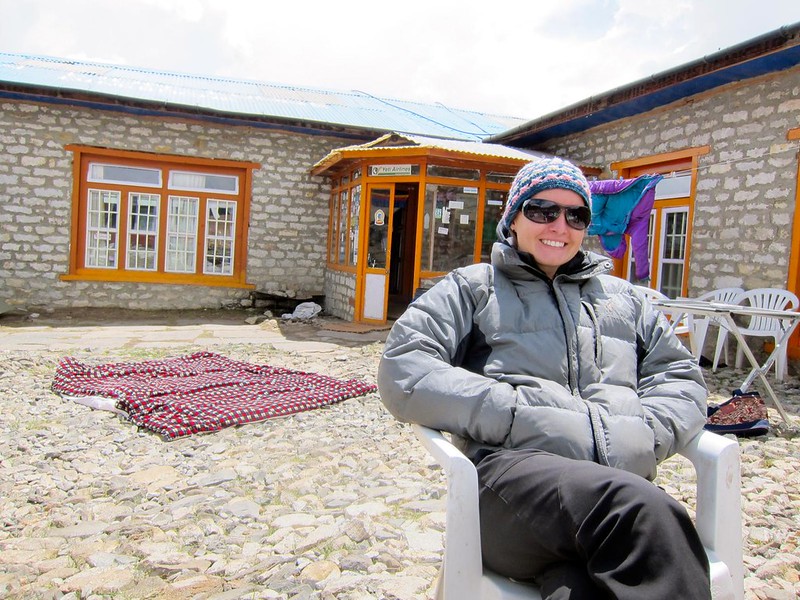 As dusk set in, we sat around a fireplace amongst a cheery crowd of other trekkers and climbers and watched with great curiosity as an entire hiking group was administered their daily dose of Diamox, an altitude sickness prevention and treatment drug. We’d heard that these guided groups need to keep to a schedule and often provide Diamox to everyone to avoid any delays, whether they need it or not! We had some Diamox in our bags, but had yet to use any ourselves – saving it in case of emergency, we figured.

We were pleased to find that the Snow Lion Lodge had a collection of books to borrow as well, since we would need to spend the following day acclimatizing at the lodge before proceeding onward.

As we were getting ready to turn in for the night, the host of our lodge came and asked Steph and I to bring our camera and follow her outside to the yard. What we found outside was a spectacular finish to an already great day. Dingboche is positioned in a valley beneath the monstrous Ama Dablam, the pointy mountain peak that dominated the horizon for the previous 2-3 days of our hike. There was a full moon that night, and it glowed just to the left of Ama Dablam and illuminated the frosty village of Dingboche below.

Standing under the beautiful glow of the moon and Ama Dablam, all we could hear was the wind… 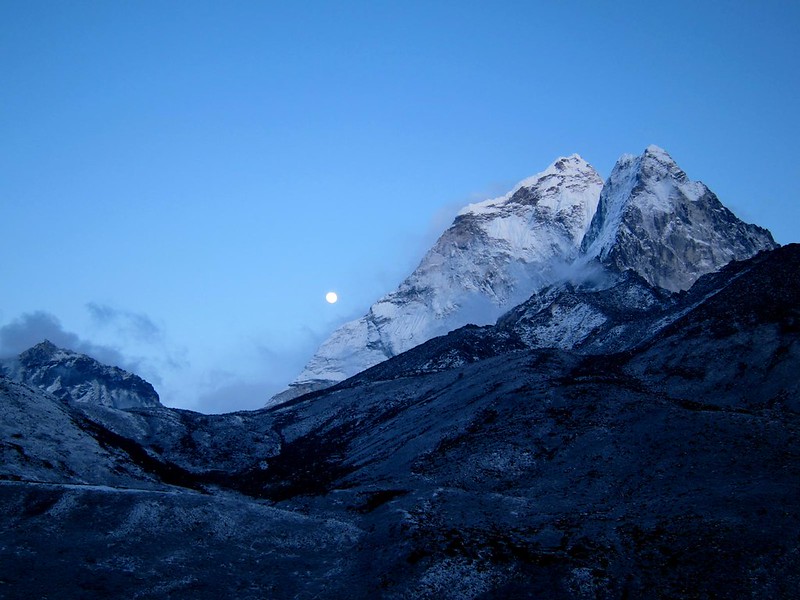 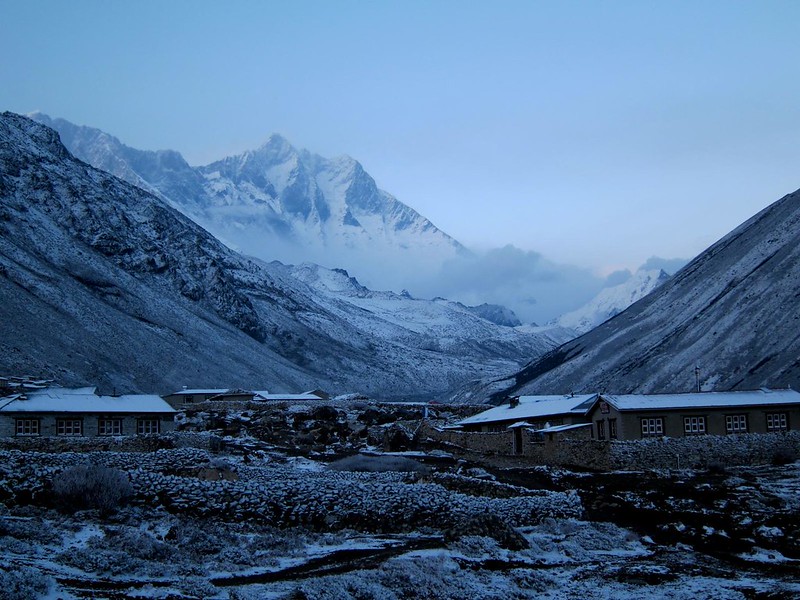 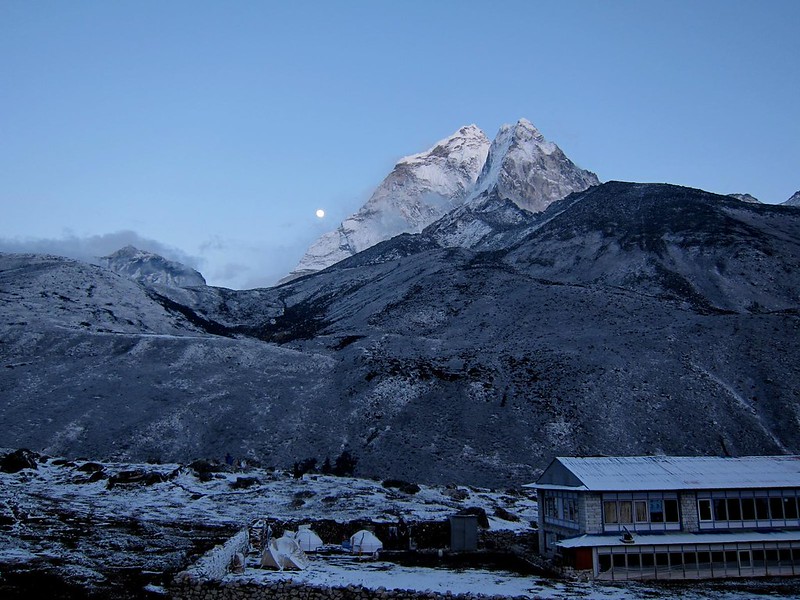 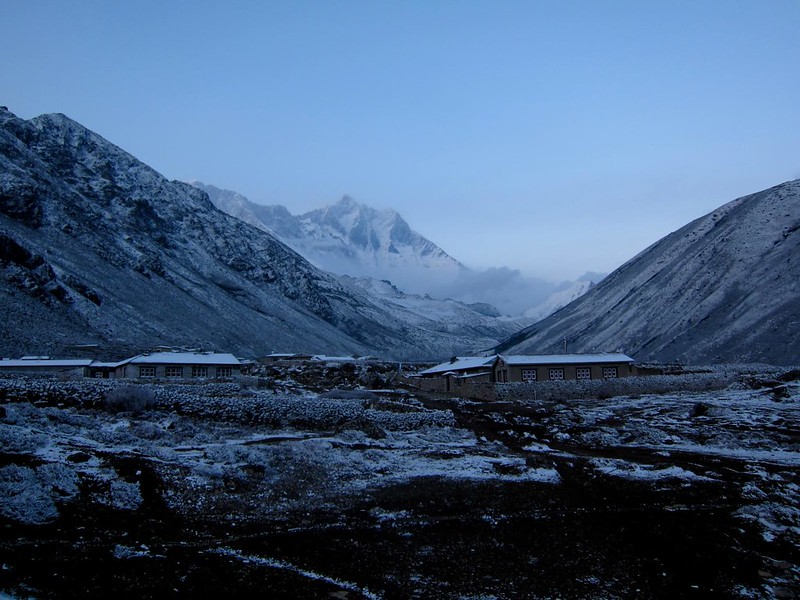