It’s been two and a half years since we returned from our trip to Asia. Although my window for writing a thoughtful final wrap-up post to our trip probably closed long ago, there is so much that needs to be written. So I will try.

Below is a “before” picture taken in the Panama City Beach airport before leaving for Bangkok. My clothes are clean, and my hair is pulled back in a perfect bun. The blue backpack, white shoulder bag, and my shoes will not survive the trip. When this was taken, I was desperately nervous and fearful that we were making a bad decision in undertaking a completely unplanned itinerary for an indeterminate amount of time. From the backseat of my dad’s car I hyperventilated aloud, “What am I doing, what am I doing?”  But from the anti-malarial pills to the headlamps to the water sterilizer, we were sufficiently prepared to travel somewhere for at least year, and I am proud to look back at this picture and know how ready we were, even if I didn’t believe it myself. 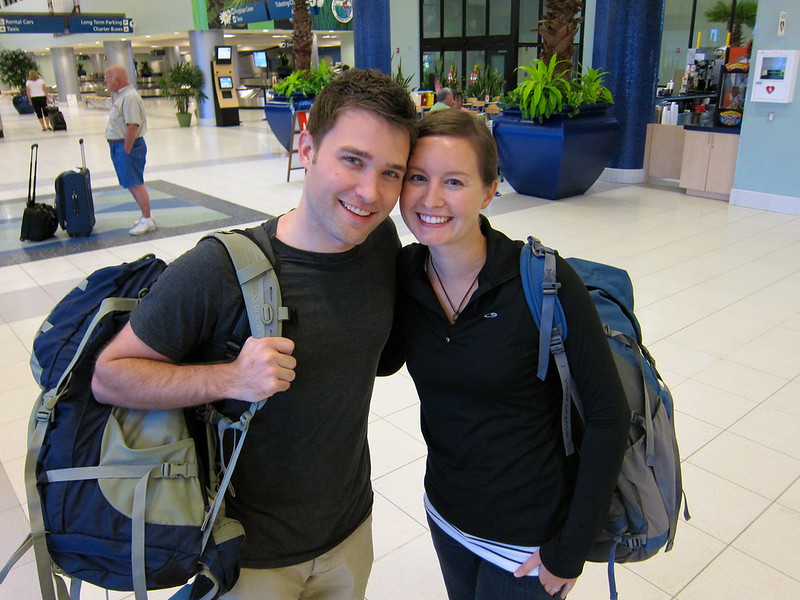 In our “after” picture, taken from the back of a taxi cab in Kathmandu, we are more hardened, more travel-savvy, and feeling incredibly accomplished and proud of what we’ve just done. But we’re also perhaps even more fearful than before we had left– fearful of flying, of knowing the feeling of what it would be like to never see the U.S. again after taking a few bad flights. We were nervously driving through a major square during a city-wide strike in this shot, and we were both ready to be home, despite not really wanting to stop traveling. I love how our hair and appearances are a little more disheveled than in the “before” picture and that we’re not wearing a single object of clothing or jewelry that we left the U.S. with. In fact, most of our clothes, shoes, backpack, and handbag were thrown in hotel trashcans or donated to locals as the trip wore on and the clothes wore down. I bought the dress, necklace, and bracelet in Nepal, and my last haircut was in Thailand. Scott’s shirt is from Lao, his pants are from Thailand, and he’s rockin’ an Indian haircut. I believe our undies were, ironically, the lone survivors from the U.S. 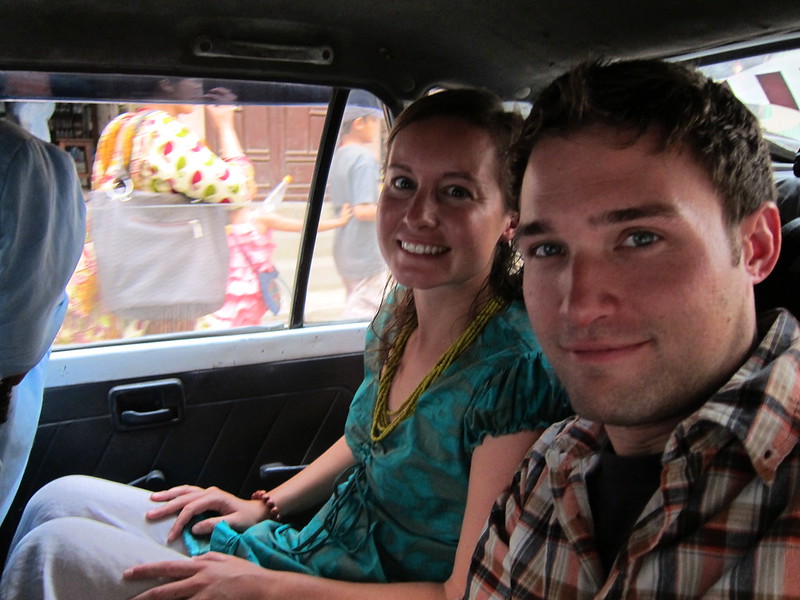 The morning the picture was taken, we woke up giddy and nervous. We packed our gifts to bring home to our families and said our goodbyes to the hotel staff. We flew out of Kathmandu to Dubai on a plane packed with young Nepali men traveling to the Middle East looking for work. I believe we were the only foreigners on the plane, and I was one of only two women. One man continued to play with his cellphone during takeoff, and Scott told him to turn it off because we were now terrified of flying (we’d come so far to crash now!). I was a wreck as we took off into a stormy evening sky and just prayed for home.

Below is the last picture of my filthy laptop bag, which was about to be stuffed into a McDonalds trashcan in the Dubai airport (on purpose). Considering that I got teased about how filthy it was in India, it was time to let it go. 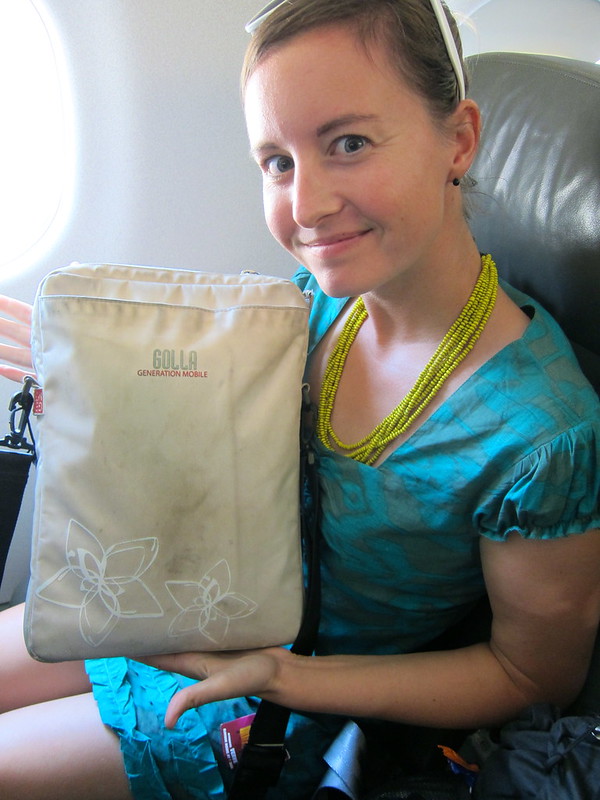 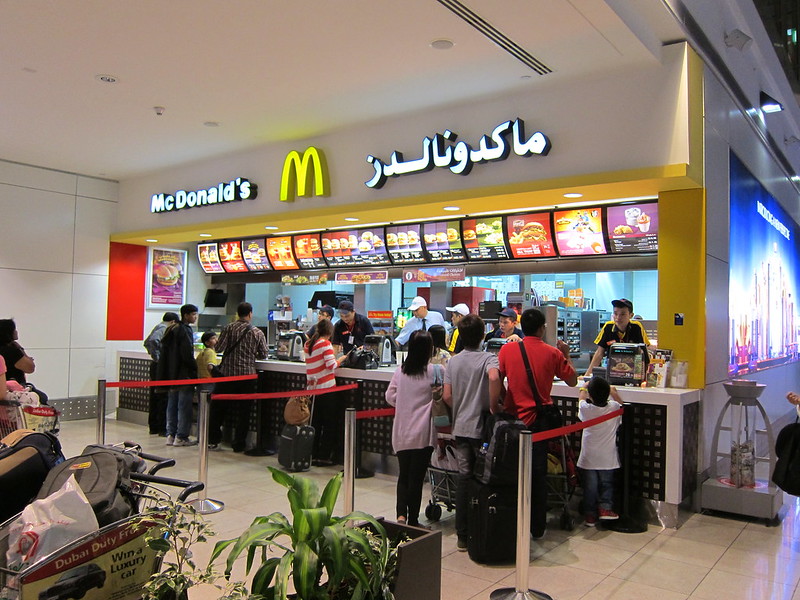 Final leg of the trip on Emirates from Dubai to JFK, NY: 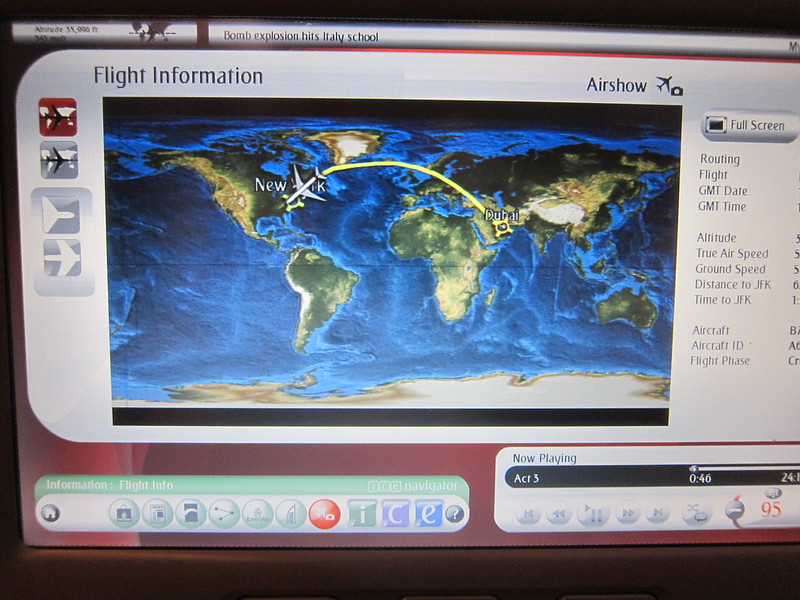 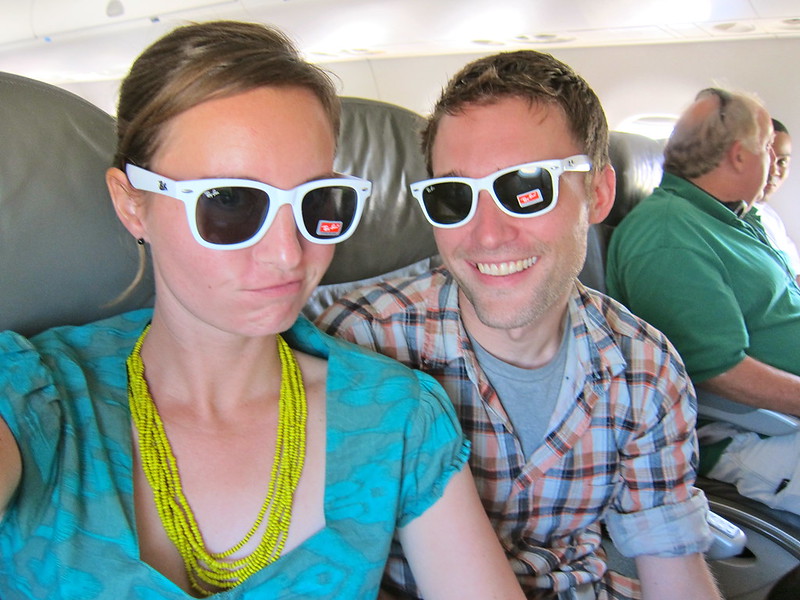 Our first sight of the U.S. (New York) in eight months:

After our flight from Dubai to New York, It felt strange, albeit good, to stand in the “Citizens” line at customs after so many months of crowding into the “Foreigners” bin. The customs officer complimented us on the number of stamps in our passports and said “Welcome Home”. But the first sign that we were back on U.S. soil was not the banner proclaiming we were in the U.S. or the strong Jersey accents from the airport personnel.  It was a young woman wearing a pair of bootcut jeans and ballet flats, the “American uniform”, as I called it. It now looked so foreign to me! I had seen many women wearing jeans on our trip, but in Asia the jeans were always skinny jeans and were paired with plastic high heels (Thailand and Cambodia only) or leather sandals; these jeans in front of me were very American jeans, both in color and style. It was so very strange to have been gone from home so long that I was now viewing my home country with “foreign eyes”. I realized that I had previously never traveled long enough to have the same experience.

Past the woman, I noticed the clean floors and for a second considered how ironic it was that there were no families gathered on the cool, clean tiles, sharing curry or chatting; that only seemed to happen on dirty cement floors of train stations in another lifetime. Here, people were seated quietly in business suits, staring at their phones or computers. I marveled at being able to drink water out of a public water fountain, after being so accustomed to buying or sterilizing every drop of water we had drunk in the past year. Even throwing my toilet paper into the toilet seemed preposterous, as if I might break the fragile plumbing with each paper square. It was also strange hearing English and being able to overhear conversations again. When we traveled, I always wondered what people on the bus or train were saying around us that I couldn’t understand, although the conversations were probably as mundane as those I was hearing now.

Now that we’re home I’ve often wondered… Would I do a similar trip again, even if it means slogging my only belongings from hotel to hotel every few days? So much so that sometimes it hurts. What would I have done differently on the last trip? A few things but also nothing at all. Despite some frustrations and small annoyances, it was a near-perfect trip. There were an infinite number of perfect trips that we could have taken, and wow, did we knock one of them out of the park. We only made it to 1 (one!!!) continent on our “trip around the world”, even though we planned to visit many more, but we wouldn’t have had it any other way. There was so much to see in SE Asia that even after 8 months there we still didn’t want to leave. I certainly could have spent a lifetime there, and I sometimes forget why we decided to end the trip at all… It would have been so easy to keep going…?

Although we didn’t have plans to stop traveling when we did, we returned from our trip because of several family hardships happening back home, and we had the idea that we might fly back out again to keep traveling after visiting home. So, because we left Asia with the slight inkling that we might return right away, going home from our trip was actually not so hard. I needed to be home for my family, and I had developed a newfound fear of flying (not so good for a traveler), so when we put our feet down on U.S. soil for the first time in 8 months, it was actually not so difficult to just, well, stay.

A corny as it sounds, I was changed forever by the trip. It was the most precious souvenir that I could have imagined bringing home with me. Each day on the trip I actually fretted to myself about wanting to be personally “affected” by the trip thinking, “I don’t feel any different; when will I feel different? Enlightened? Should I take up writing or yoga or meditation to speed things along?” And what I finally realized was that, collectively, the days had built upon one another in such a way that they were all pieces of a puzzle that were each important to my feeling different about the world and life. I really hadn’t changed until we reached home and I looked back at all the memories and days and could let them be a peaceful collective whole, influencing my future thoughts and feelings.

In even more ways, I’m also very much the same person that I was before I left. Looking at my first blog post from this trip (written on our first plane ride out of Florida), it’s clear that I’ve always known who I was and what was important in my life; although I will continue to throw my entire body and soul into exploring this amazing world, I will always be happy to return home.