We hiked out of Tengboche on a spectacular, clear day. The sky was a deep, intense blue, like an ocean, and the only clouds in the sky were the ones hovering over Mt. Everest in the distance. 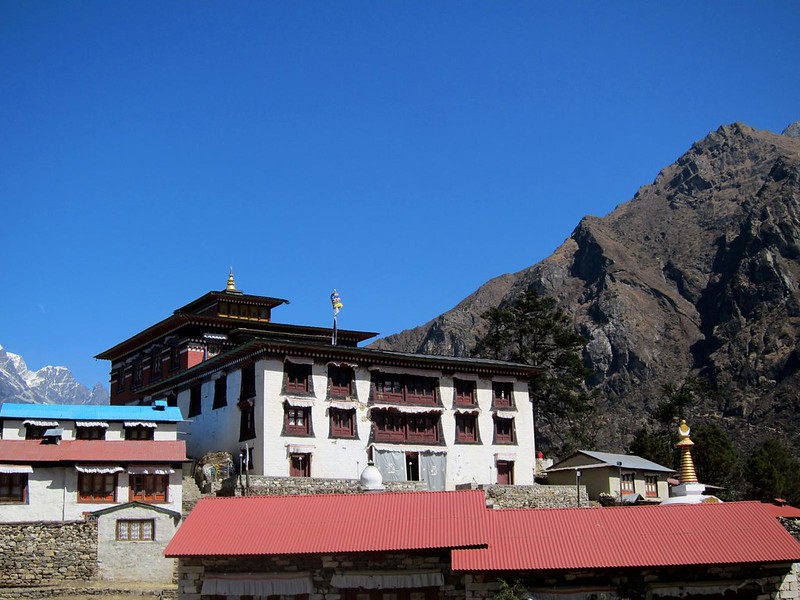 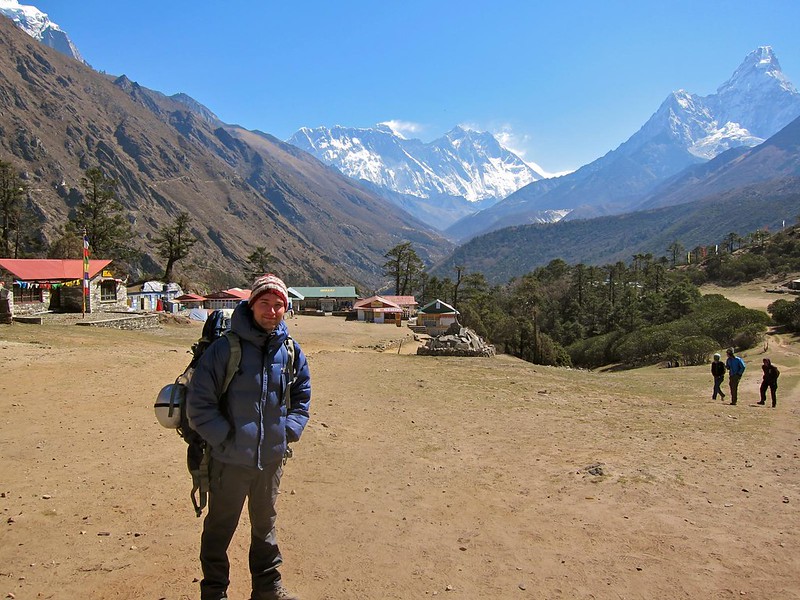 We almost hadn’t made it out the door on this particular day– I was sicker than ever with my sinus infection and worried that I was making it worse by hiking. We agreed that we should try to go just a little farther and use the afternoon to rest. So we descended out of Tengboche and into a lush green forest, filled with rhododendron trees (and yaks). 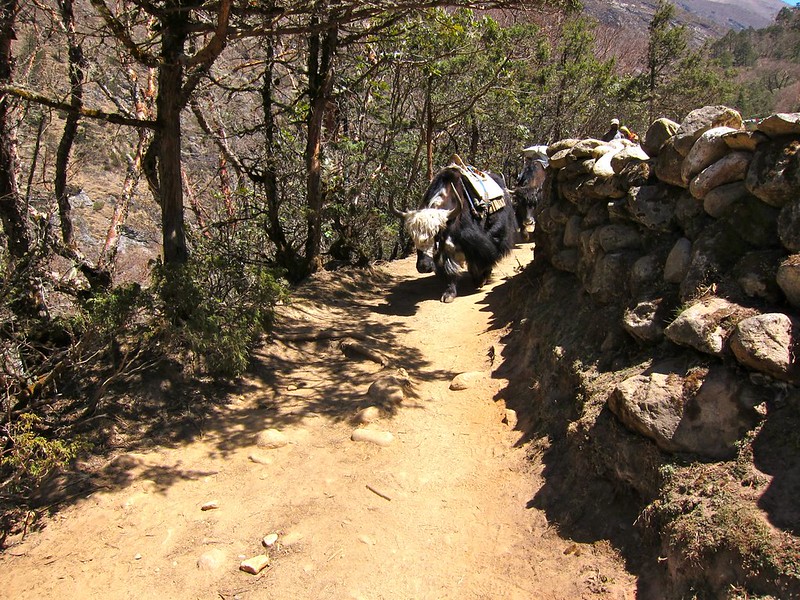 After about an hour, we reached a tiny village called Dingboche, where we had heard there was a Buddhist nunnery. We easily found the nunnery and walked around the grounds for a few minutes but didn’t see signs of any people.

[Me outside the nunnery; scriptures are carved into the stones.] 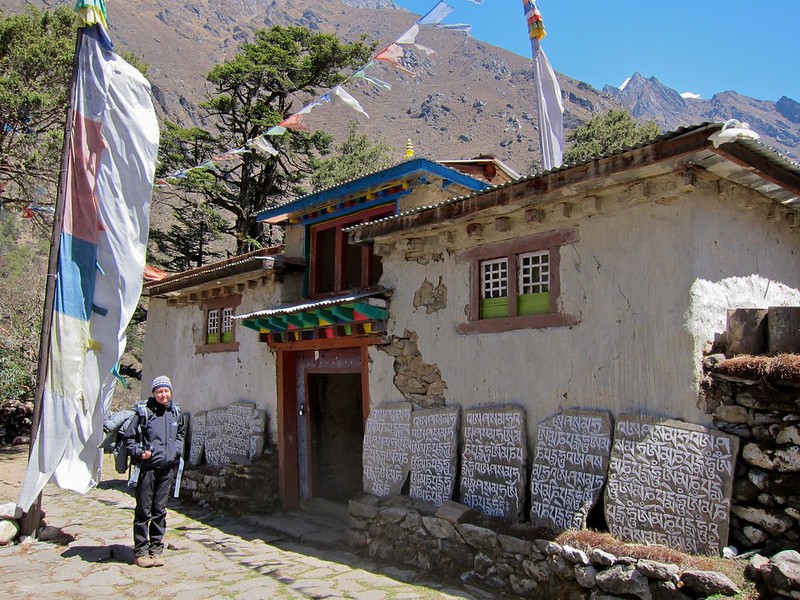 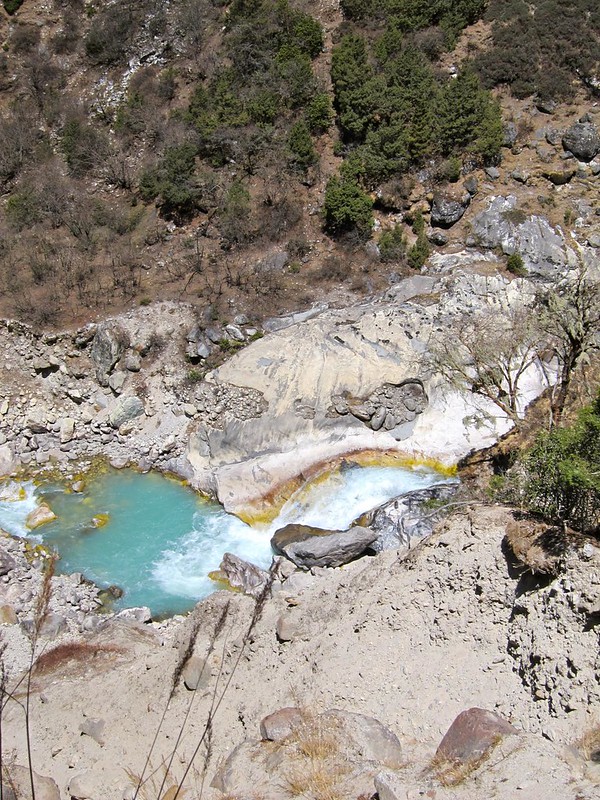 Although I was still feeling pretty good by the time we got to Dingboche, my energy had started to fall off precipitously thereafter. To keep me going, we passed the time singing, “Do You Know the Way to Pangboche? bah bah bah bah bah…” (…to the tune of Dionne Warwick).  It even became our theme song for the trek, since so many towns along the EBC trail rhyme with “San Jose” ( Tengboche, Pangboche, Dingboche, Pheriche………)

Heading toward Pangboche, with Ama Dablam, one of the most beautiful and recognizable peaks in the region, in the distance. 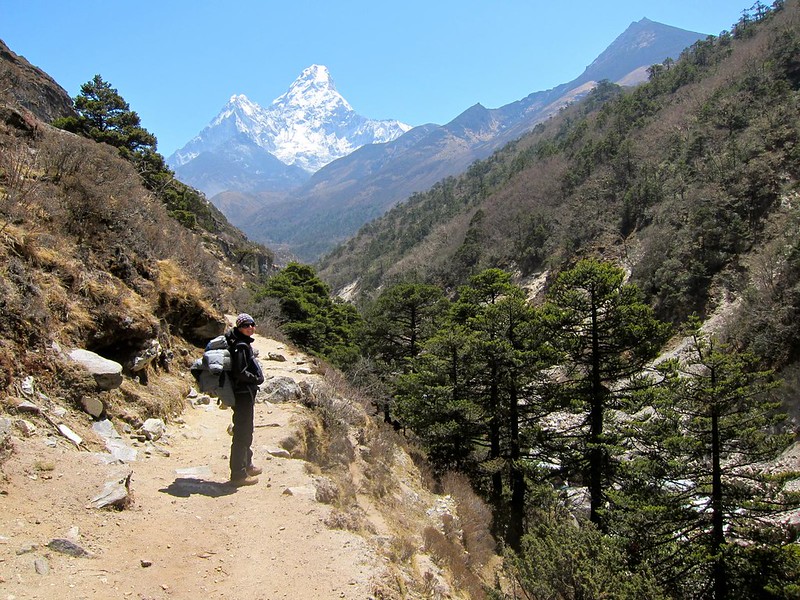 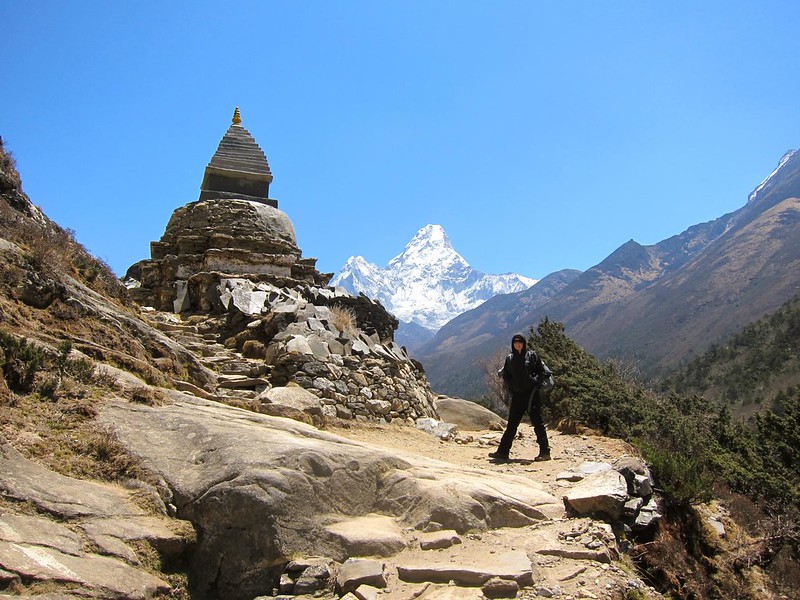 The Pangboche stupa (one of my favorites): 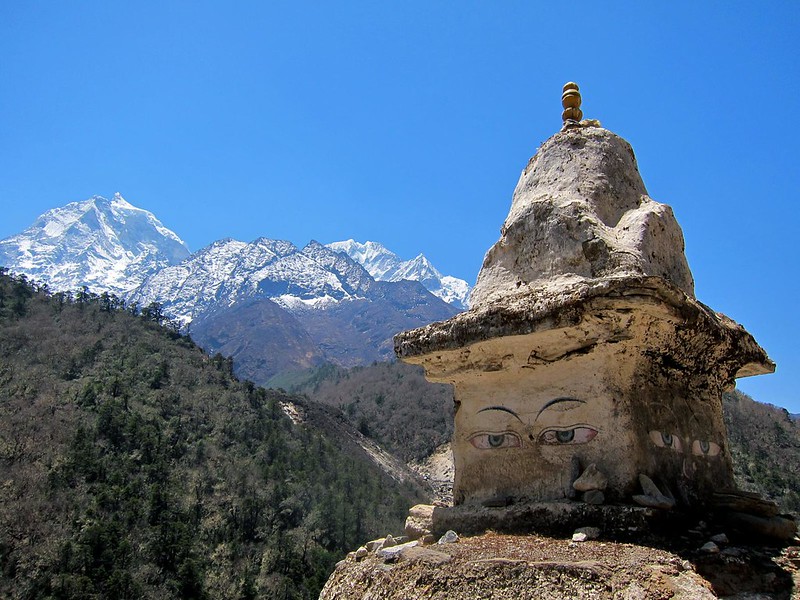 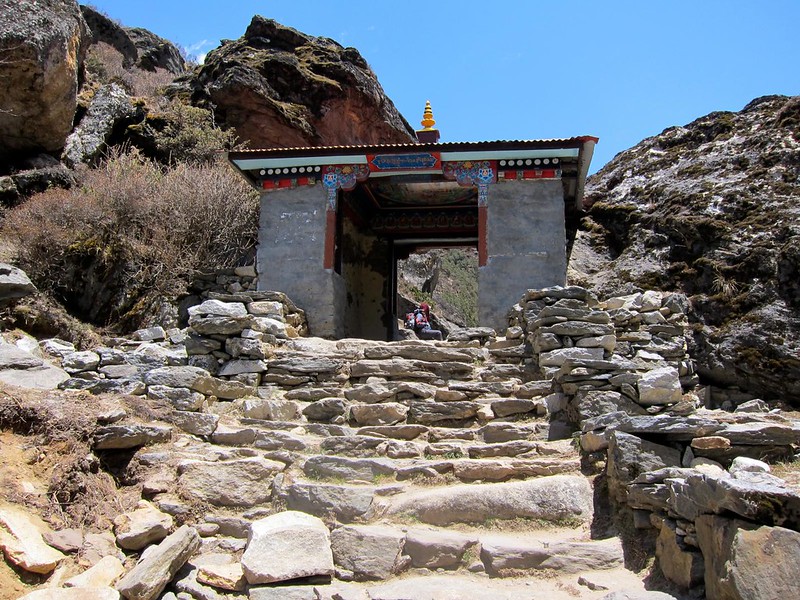 We made it to Pangboche around 11:00 in the morning. Normally, we would break during the day around this time for lunch and then hit the trail again for the afternoon portion of the hike. However, on this particular day, I was barely standing by the time the time we reached Pangboche due to my infection, and we knew we needed to stop for the day. I clung to a rock wall while Scott ran inside a place called the Himalayan Motel to see if they had any rooms. While he was checking, one of the motel caretakers came up to me and asked me if I was OK, since I was clinging onto the rock wall so tightly. I was so, so tired. Unfortunately, they didn’t have any rooms available that night, so we checked into the guesthouse next door where a nice Nepali woman showed us our room. She gave us the best room in the lodge (we were the only guests) with a clear view of Ama Dablam; however, the wind was so fierce and cold on that side of the lodge that it blasted through the rickety single-pane windows and created and draft through the room. We asked to be moved to the other side of the lodge, which was fine with her, but I’m not sure how much warmer it was…

At the risk of sounding like a broken record, this village was again noticeably colder than the last. We were now at just over 13,000 feet, which is higher than either of us had ever been, and there was, of course, no heat in the buildings. We learned that the buildings aren’t heated because it is (thankfully) illegal to chop down and burn wood in the region. Innkeepers run their small wood stoves using dried out yak dung, but there usually isn’t much to use, and it’s certainly not worth using it when the temps are a robust 30 deg F! (When we asked if the innkeepers lower down on the trail could run the stove for us, they said it wasn’t the “cold season” yet!)

Like most lodges, this motel did have a Western-style toilet, although it was a bucket-flush set up (again, like most toilets on our entire trip). The problem that we were starting to encounter with the bucket-flush on the EBC trail was that, well, the flush water wasn’t exactly what I would call liquid. It was so cold that the water was more of a slushy ice bath, that we’d have to dip our fingers into to grab the bucket and fill it up. Brrrr!

Washing our hands was getting more difficult, as well. Innkeepers generally kept a jug full of water above their bathroom sinks (hooked up to a drain, but not hooked up to incoming water) that had a spigot at the bottom, where water would come out. The water was freezing (and often empty), so we resorted to just washing our fingertips. Needless to say, we were going on Day #3 without a shower, but neither of us had the courage to take one in this cold. That shower we had back in Namche 3 days ago would be our last shower until we headed back down……….

Once we had settled into our room, we headed down to the dining room of our lodge, where we were planning to catch up on our reading and blog writing. However, it was far too cold to concentrate, and we were shivering uncontrollably. Luckily, Scott had noticed that the lodge that didn’t have any rooms available had its wood stove running and that the common room was nice and toasty. So we went next door to the Himalayan Motel and ordered some hot water ($~3 per thermos) for our tea we had brought from India.

Ang, the owner of the lodge, was a fascinating Nepali woman who was eager to share some stories of her life in the Khumbu. Apparently, she and her husband are one of the most famous Sherpa families in the region– almost every “big” summit expedition stays at her lodge, and her husband in the manager of one of the summit teams at EBC. He used to lead climbers up Mt. Everest, she said, but now he just manages from Base Camp, which she seemed very relieved to say. Next to our table was a display case containing memorabilia from early expeditions, including an air tank from the Hillary expedition (the first to summit), which we found to be pretty inspiring. She had a CB radio that she would monitor throughout the day, listening for updates from EBC and the summiting expeditions.

Eventually Ang left the room, and Scott and I spent the next hour sipping our Indian tea and reading. Suddenly, I felt the strangest wave of cloudiness run up my entire body, closing in like a blackness around my eyes and face. Sounds in the room were getting farther and farther away from me and were replaced with a fuzzy humming sound. I knew I was asking Scott for help, but I couldn’t hear my voice. I knew this feeling; I had had the same feeling after receiving an immunization, right before my blood pressure plummeted off the charts and I nearly passed out in the doctor’s office. I knew I was losing blood pressure fast, but what I didn’t know was why. I’ve always had perfect blood pressure (outside of receiving that Hep B shot…), and I began panicking as to why it was happening now. Was it the altitude? Luckily, I knew the drill from before: I quickly laid down and rested my feet up on Scott’s shoulder, praying for the feeling to just go away. Scott tried to reassure me, trying not to let my mind make it into more than it was. All I could think was “I’m going to pass out, and I’m not going to wake up again. If I do wake up, where will I be when I wake up?” Quickly, I told Scott, “Ang said there is oxygen here. If I pass out, please get me oxygen. Please get me down the mountain. Please don’t let anything happen to me.” I was so scared.

For several minutes, I lay there, with that feeling of blackness coming and going in waves, while Scott rubbed my shin lying on his shoulder. I took deep breaths and tried to relax as much as possible. Eventually, the feeling started to fade and eventually went away. Slowly, I sat up, happy to be sitting simply in case anyone else came into the room– I didn’t want anyone else to know what was happening.

Less than 5 minutes later, it happened again. No! I thought. I laid down again and tried to relax. Unfortunately (or luckily?), Ang walked in while I was sprawled out in her dining room. I had to tell her what was happening. Concerned, she suggested that go down the mountain. She said oxygen was available here, but it was expensive. I would have heeded her advice about leaving Pangboche, except that I didn’t have any nausea or headache or any “hallmark” signs of altitude-sickness. I certainly would have gone down if I had, but my symptoms just didn’t seem to fit with altitude problems. Eventually Ang left us to make our decision, and I began to feel better again. We decided that it was more likely that it was the Indian tea I had been drinking– I had had at least 3 cups of it in less than an hour, and there was no telling how much caffeine (or other strange herbs) were in it. I stopped drinking it, and thankfully, the feeling never returned…and Ang never forced us to go back down the mountain.

Eventually, dinnertime arrived, and we strolled back over to our lodge, where I managed to do what I could to keep warm. 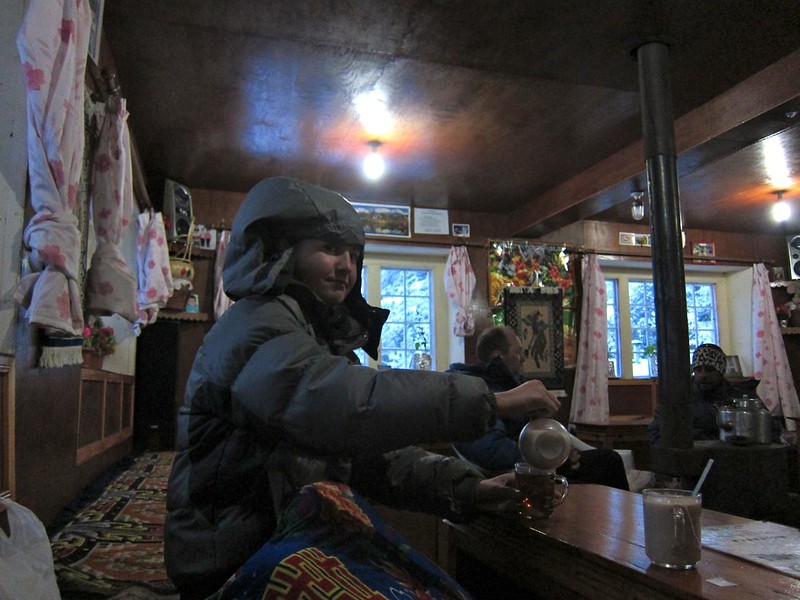 Although I wasn’t trying to be so obvious about how cold I was, my sickness was making me shiver uncontrollably. Our innkeeper noticed me shivering and brought me at least 3 heavy rugs to place over my body and legs while I waited for dinner. I was so grateful.

I choked down a plate of spaghetti for dinner, which became cold as soon as it hit the plate and tasted like kerosene. Scott ordered the veggie momos (dumplings), which were the best we found along the trail. They were huge, like stuffed pita shells and panfried on both sides like pancakes. They were also warm and very tasty. 🙂

After dinner, we gathered the stamina to brave the cold and go get into our beds, which were made colder by the fact that we couldn’t push these beds together! I thought about reading but was too chilled to put my hands outside of the sleeping bag! 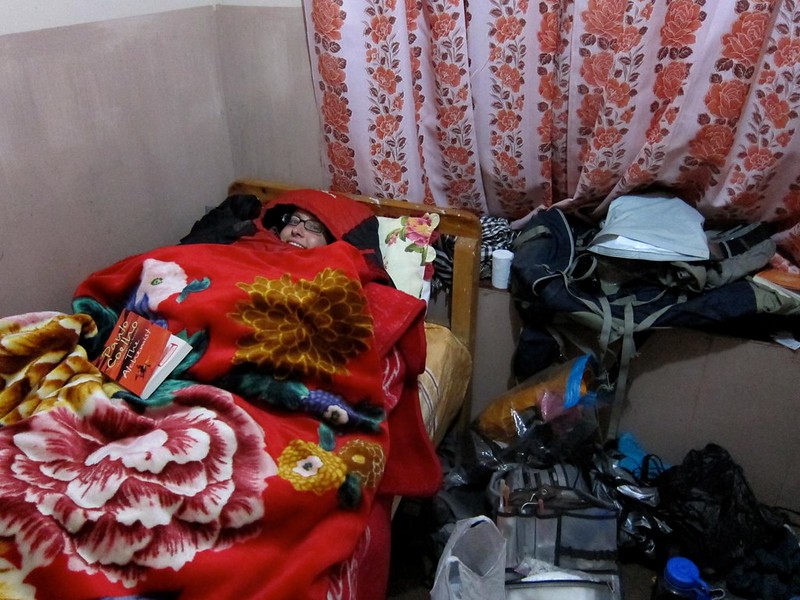 Although we heard that Pangboche had so much to offer outside of the lodges (the oldest monastery in the region, gorgeous hiking, a yeti hand!!!), I was too sick to explore on this day. So we promised ourselves that we would conserve our energy now and have a look around when we were on our way back down….

One thought on “EBC Trek, Day 5: Tengboche to Pangboche”