The convenience of our evening arrival in India did not foreshadow what was soon to come; a private driver from the hotel was waiting – right on time – at the Delhi airport, and we were comfortably escorted to what appeared to be the swankiest hotel room we’d had our whole trip.

Yes, things were comfortable at first, but the real India took little time to show its face…

It began with the electricity: turn on several lights at a time, or plug the teapot into an outlet, and snap: a short circuit for the entire wing of our hotel. I had some work to finish up that night, so the need for power was imminent; minutes within arrival, there I was, out in the hall looking for a maintenance person to fix our room. This time, ironic convenience was on our side: the breaker panel just outside our door, loose wires dangling out the top, was left ajar for guests to correct their circuit glitches themselves. India, we would soon learn, always has an answer; it’s the questions you end up asking that are crazy.

Flipping the circuit back taught us the benefits of an Indian power surge: when the power comes back, either after the daily citywide outages, or a routine circuit crash in the room, it really comes back. You can charge a Macbook Air in 20 minutes, or boil a teapot in less than 1! Anyway, with the power back again (at least until the next city-wide outage) we were left to battle the wifi, for which we’d already requested a password, but the young gents at the front desk just couldn’t take their eyes off the cricket match to help. No rush, it turned out: when we did eventually get a password, the internet didn’t work anyway, and we were told it wouldn’t work for the remainder of the night. Work would have to wait for tonight…

I suppose I could mention some other missteps of the evening: the delivery boy from the restaurant who smiled and never returned with our change, or our luxurious-looking many-headed shower that spat a stream of either steam-pipe-hot or numbingly cold water horizontally out the wall (which Steph then collected from across the room in a bucket for bathing).  These were the sort of daily inconveniences that we would get used to, and that was just the scene inside our room… 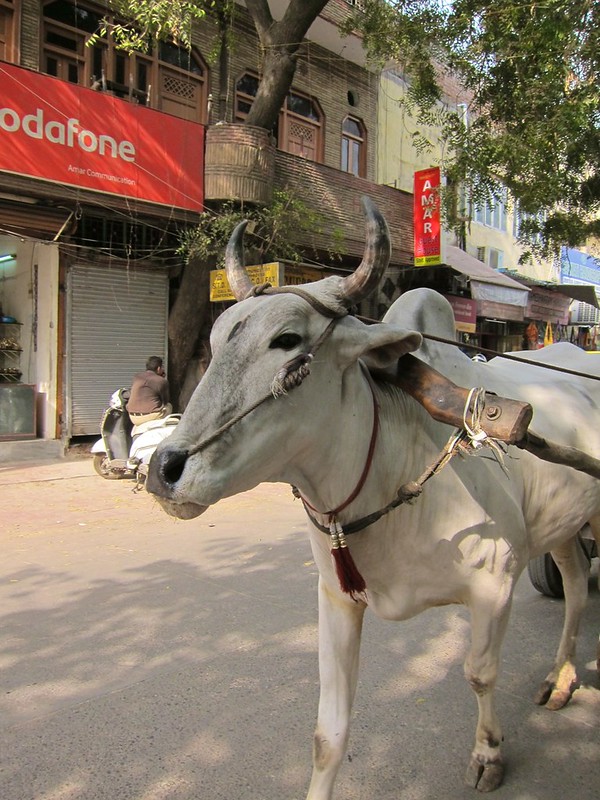 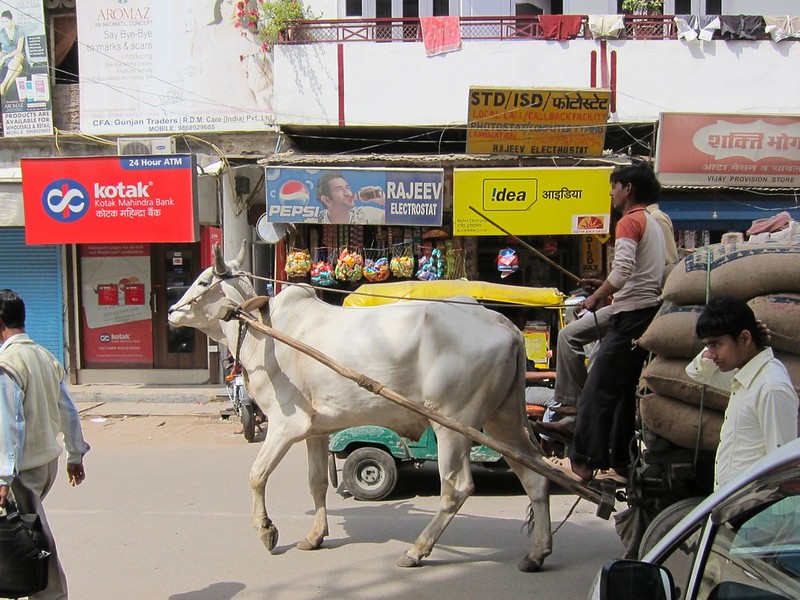 In our travels, we’ve visited some of the poorest, resource-strapped locales, and certainly aren’t new to uncomfortable settings. Yet New Delhi still felt like a category of its own. Utterly overcrowded, filthy, cows wandering aimlessly in the streets and eating out of dumpsters, car horns that seemed to be on by default, dangerous obstacles everywhere… did I mention the filth? Poop – presumably not all from the cows – in the gutters alongside the roads. The smell was a constant flux, from rich masalas and buttery naan, to feces, to exhaust, to body odors, and back to something nice again. This mess seemed to extend to any area we visited; as a major world city, the conditions there really took us by surprise. To be frank, the place looked like a giant construction zone. Even Connaught Place, a major trendy shopping district, sat tangled in a nest of wires, busted concrete, piles of sand, and well, more poop it seemed. 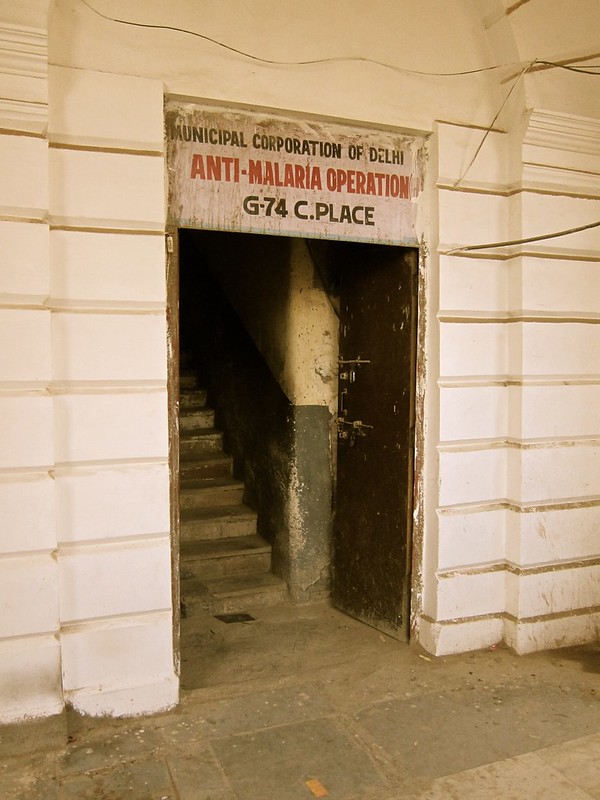 To our further surprise, New Delhi proved to be a mere primer for Old Delhi, the former city center and home to even further overcrowding and in-your-face poverty. If there was ever a moment that we felt we had never travelled anywhere before, getting off the metro one morning in Old Delhi was certainly it. Delhi is one of the (maybe the) oldest cities in the world, and as Steph said, Old Delhi appeared as if nothing had been removed since its founding thousands of years ago, but rather layered and layered on top of all that was already there. Signs over signs over other signs… power lines wrapping buildings like yarn… the obstacles seemed to multiply as well. 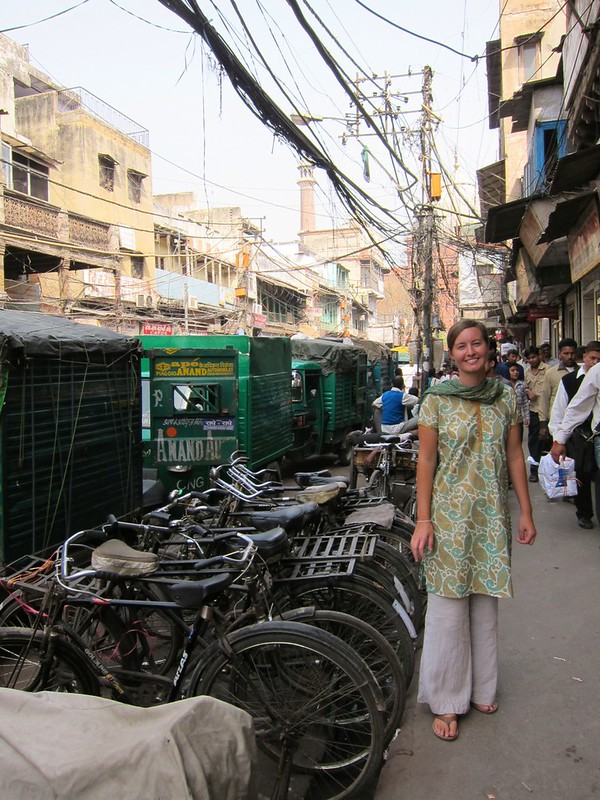 We carefully navigated the tight streets, jammed with ox carts, cars, bicycles, and scooters as flashes from welding lights sparked from the metal work shops along the sides, and vendors surrounded themselves with pots of burbling masalas and cooked chapati over tall, open flames. Every garage-front had a group of men sweating away on some sort of craft that might have been made in that spot for hundreds of years: ice cubes, cart axels, grain bags, and more. Each store seemed to specialize in, and sell just one thing: a door handle store, one for hinges, and another for car bumpers. 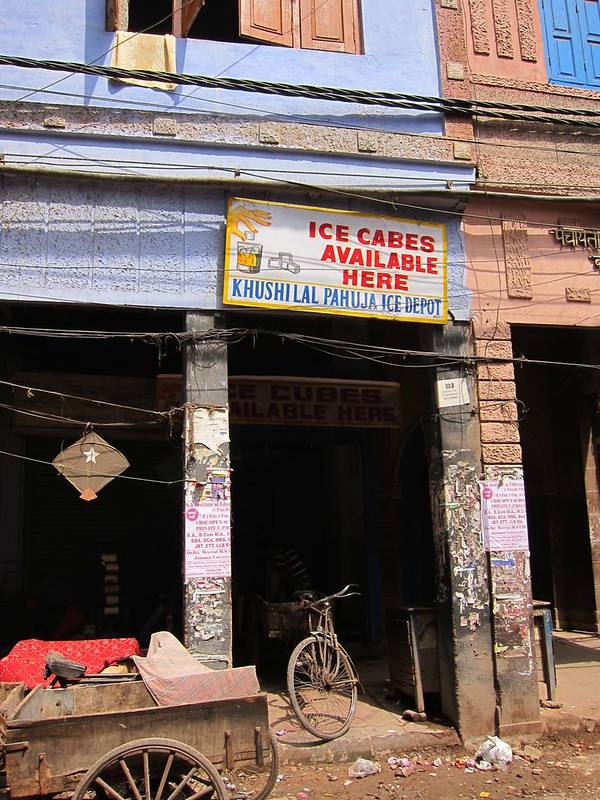 An Old Delhi hospital. Eek. Watch you toes in that traffic:

Our plan was to make our way to visit Jama Masjid Mosque, the largest mosque in Delhi. The way there, while not physically far, involved a maze of alleyways, forking and twisting around buildings, beneath dusty drapes stretched overhead to block out the midday sun. Around one corner, a garbage heap with women sifting for anything of worth, the next, a traffic jam of people and carts; all along, we were met with unflinching stares.

But try as it may, the place was still impossible for us to dislike. How could you not find this place fascinating, what in all its post-apocalyptic haze? And of course, amongst the mess, there was plenty to legitimately appreciate as well. 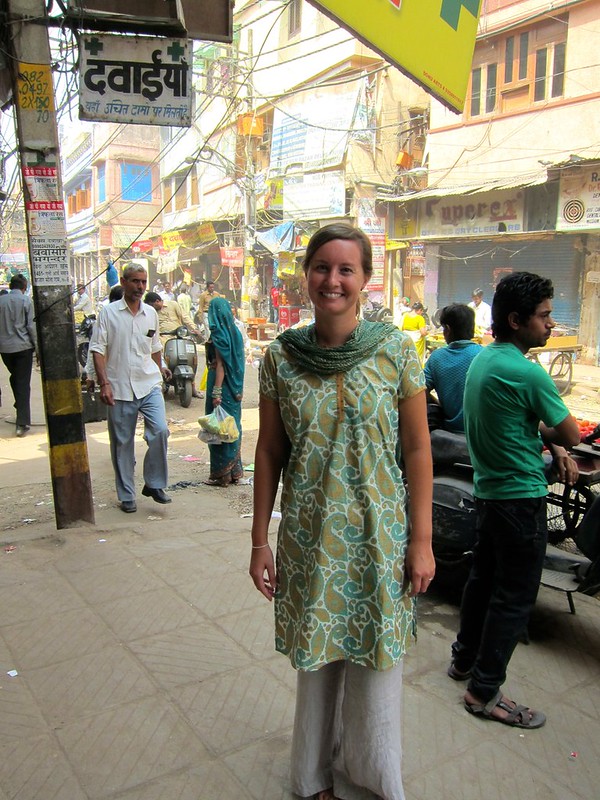 For one, the colors. It seemed every woman on the street was draped in a beautiful sari of a different vivid color combination, and thick gold on their face, neck, ears, and wrists. 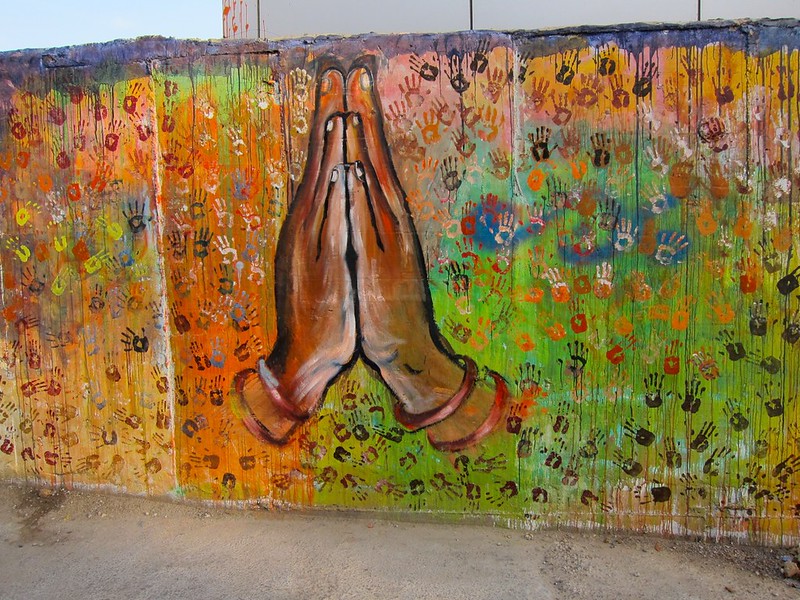 The foods were bright as well, more like bubbling vats of paint than anything fit to eat. But indeed, they were fit to eat, at least in the sense that they were delicious – as for safety, that’s anyone’s guess (the term “Delhi Belly” didn’t just happen for nothing).

Cheesecake-ish treats from a sweet shop: 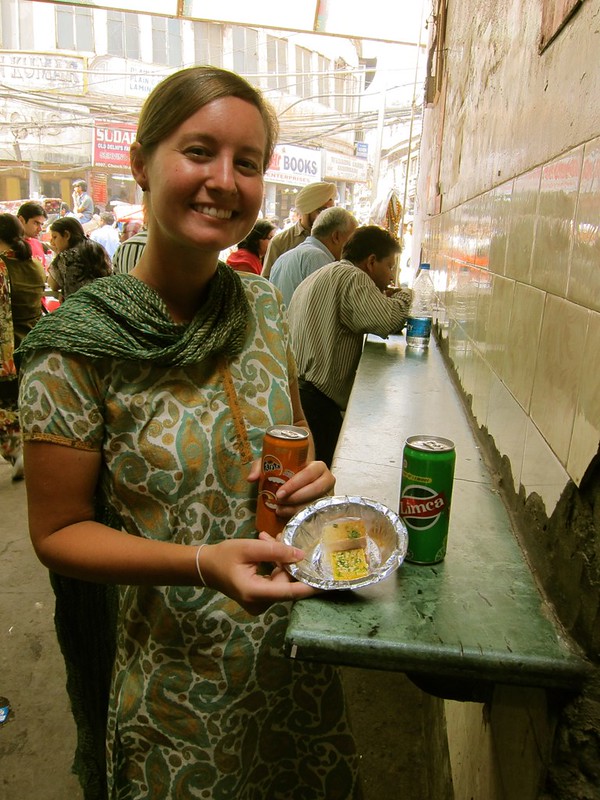 A cool, yogurt lassi in a clay pot (which was destroyed after use!) 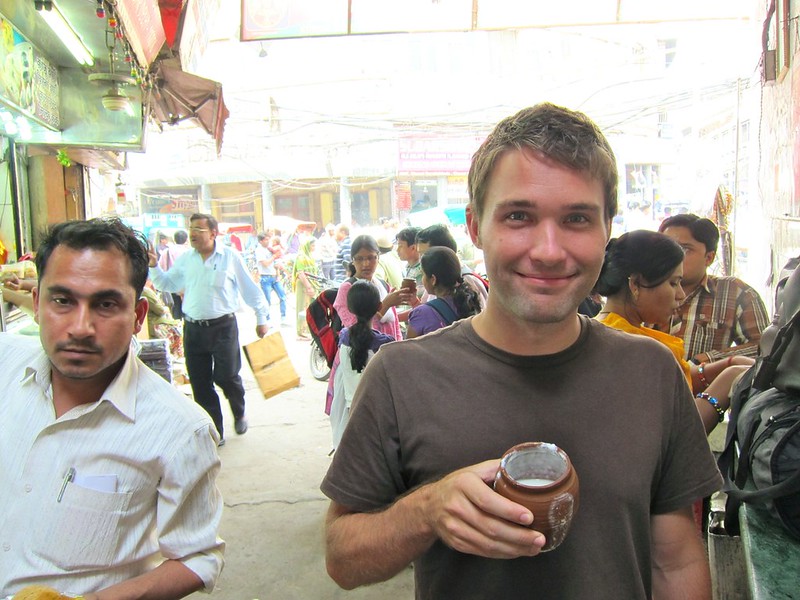 Also, despite the universal, intimidating stares, most every person we talked to was friendly and helpful, which was critical in finding our way to Jama Masjid.

The front entrance to Jama Masjid 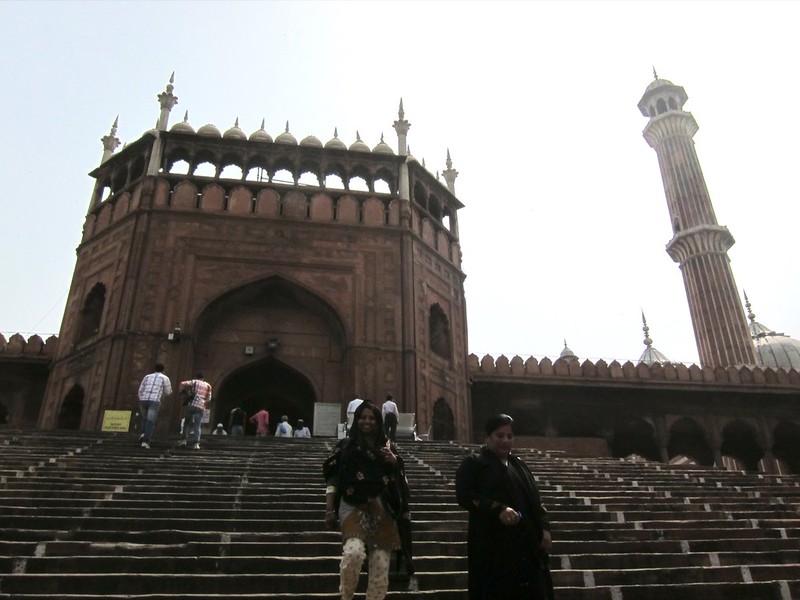 View from the interior, with Red Fort in the backdrop

Steph in the courtyard. Behind her, worshippers drink and bathe in the small pool of water.

A woman at Jama Masjid

We entered Jama Masjid in between prayer calls, and inside, many people were performing the religious routines you’d expect to find in an Islamic temple: bowing in the direction of Mecca, reading their Quran propped on little bookrests, bathing in the pool in the center of the mosque.  Many were also eager to chat (“your country?”) and take their picture with us (something we’d soon get used to in India).

Steph saw this woman peeking at her several times before finally getting the courage to come up and ask for a picture with Steph.

…okay, we were the ones who asked for this picture:

Upon returning to New Delhi after a day in the Old, we’d seen enough that our eyes had begun to adjust. New Delhi began to look almost tame… almost. In the book Midnight’s Children, which takes place in India, Salman Rushdie calls it “city eyes”: this ability we all have to become accustomed to the filth, the begging, the suffering right in front of our eyes. It sounds cold, but without this ability, I’m afraid India would be completely overwhelming. 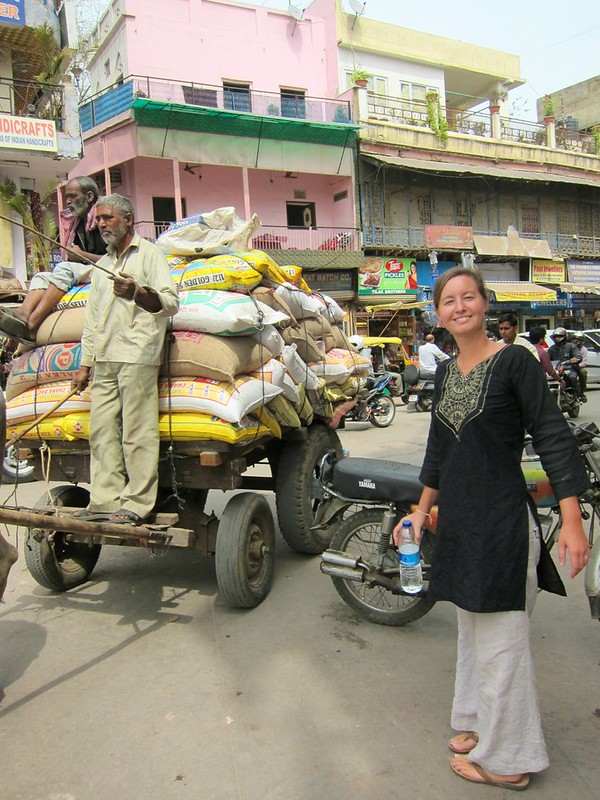 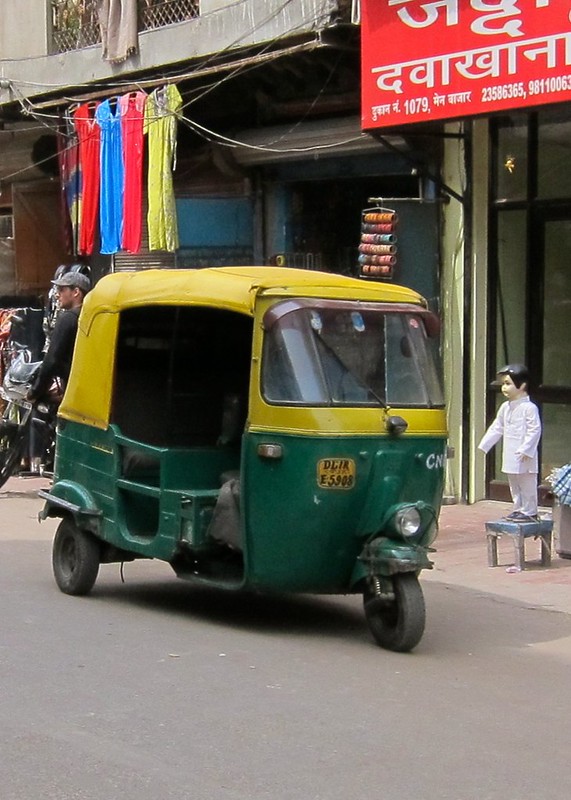 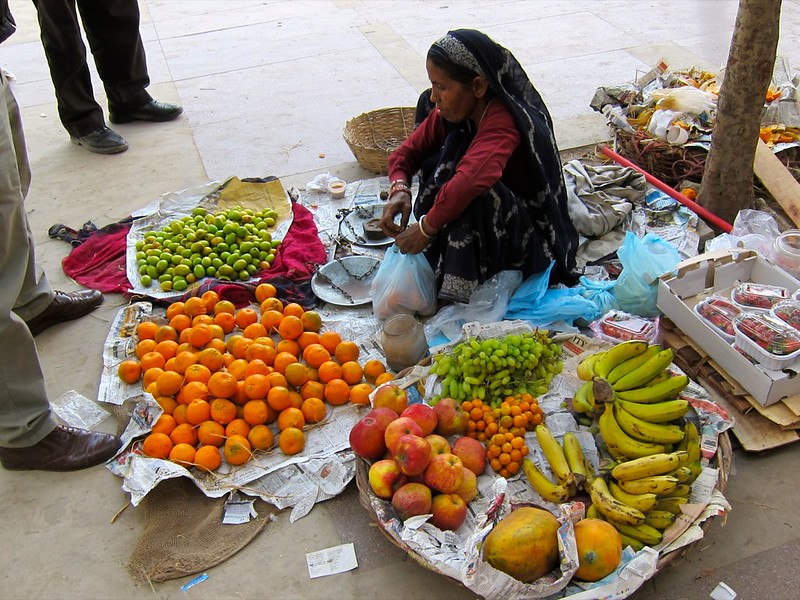 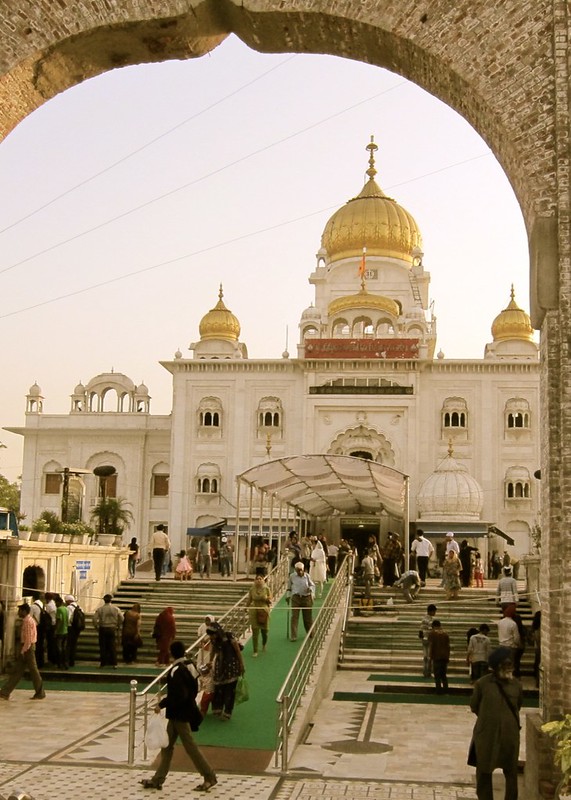 Gaining our city eyes would prove important in India, as it’s easy to dwell so much on that bad that you miss true beauty in between. India was already proving itself to us as a place unlike any we’d seen, and in our next stops, we were certain to see much more. 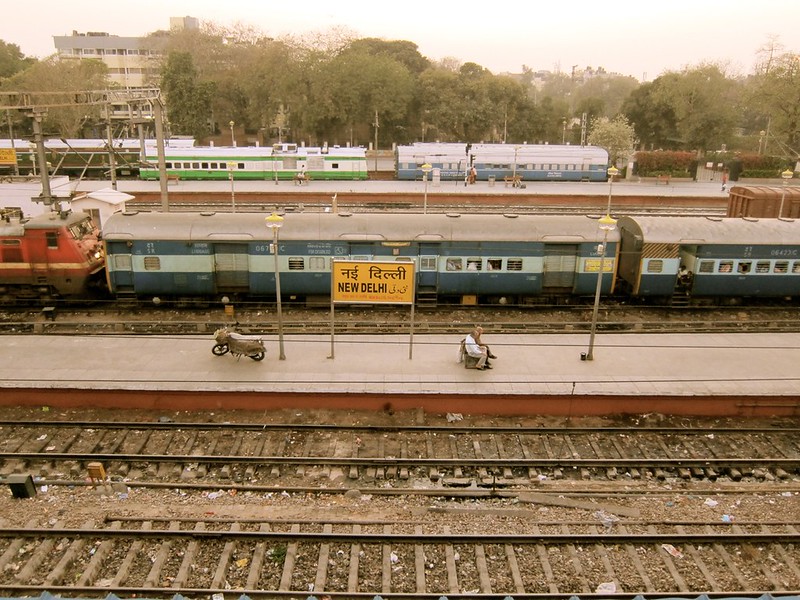