Pulling into the ground transport hub outside Colombo, Sri Lanka was a breath of exhausty, dusty, body-odorous air. We bumped our way through crowds of hawkers and honking tuk-tuks to find our way to the correct repurposed school bus and lumbered ourselves in, cramming – bags and all – into a one-and-a-half person wide seat to wait for the bus to load. There we sat in the stifling heat, unsure of when the driver would show, whether we were on the right bus, or even how soon the bus would depart.

Transport days… we’ve come to learn not to judge any place by its first appearances, and Sri Lanka was proving no different. Alas, the time had come for a change of scenery for us and it was thrilling to be out of our comfort zone again – back on the road and experiencing something new – just the reason we left home in the first place!

The differences were all around, and helped to warm the mood.

The colors! Outside our window was a legitimate mess of activity, like a toddler’s plate at Thanksgiving. Women bustled around the station draped and tucked into vivid saris, the men in patterned lunghi kilts and linen collared shirts. Dahl curries stewed in the shop-fronts alongside towers of roti samosas filled with starchy veggies, yellow-orange turmeric, cumin. Replacing the motorcycle-pulled tuk-tuks we’d come to know well in Cambodia were sleek, egg-shaped “three-wheelers”, painted black, green, yellow, blue, sometimes tan.

Soon enough, our bus driver hopped up and started the engine. Off we were to Kandy, a historic and cultural hub of the country. Along the way, deep blue skies and banana trees blurred together out our window as everyone on the road, especially the bus drivers, treated the narrow rural roads like a race course and the traffic lanes like a naive suggestion. Before long, we were in bustling Kandy negotiating a fare with a 3-wheeler driver who would take us to our guesthouse, Sevana.

Sevana was a welcome and quiet retreat from the streets outside. We checked into our room, tossed our bags on the floor, and gazed out the screen window of our room… “Where the heck are we…?” 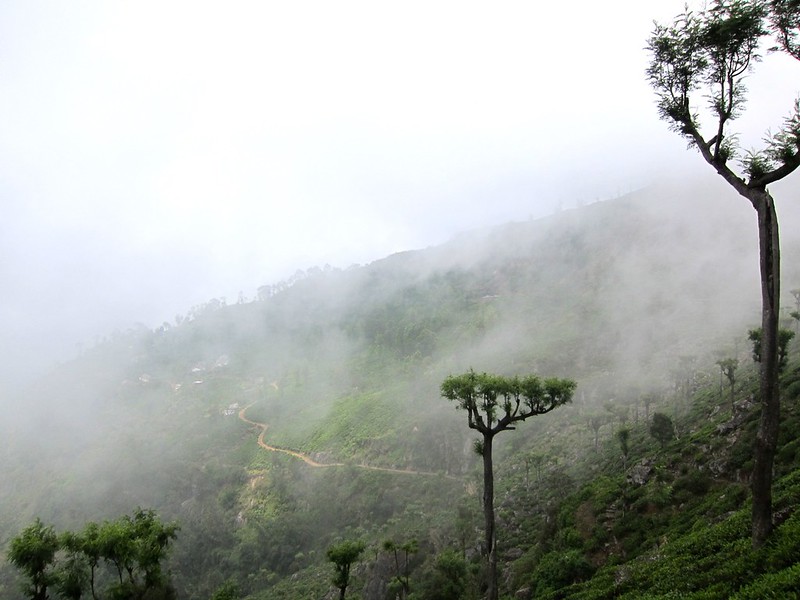 Throughout our time in Sri Lanka, that “where the…” feeling never really went away – it was quite a change from the scenes we’d grown used to in Southeast Asia.

We stayed long enough in Kandy just to get our Indian visas submitted, which was an adventure in and of itself– one frought with overly-picky Indian visa officials (there’s a shadow behind Steph’s ear in her application photo? Go get a new one!), multiple trips to the internet cafe next to the visa office, the discovery that the U.S. had made an error on Steph’s passport which the Indian officials kindly pointed out to her, our encounters with extreme gender inequality with security guards who only search/interrogate women, and a Muslim man who, upon learning we were American, asked us if we were afraid of his beard!

Feeling we’d been slung through the wringer at the visa office, we did little else in Kandy than wander the city for an afternoon or two, and try some delicous new foods, such as the rotis and curries at Kandy Muslim Hotel (which like most “hotels” in Sri Lanka, aren’t hotels at all, but restaurants).

Nearing the end of our lunch at Kandy Muslim Hotel, we were encouraged to eat faster, faster, then as-fast-as-possible and (as kindly as possible) GET OUT!– they were closing the entire restaurant, as they do every day at 12:30, for their afternoon call to prayer. The patrons filed out, the metal security door was pulled down tight, and twenty minutes later, they were open for business again.

While in Kandy we also toured the Temple of the Sacred Tooth, which holds one of the teeth of the Buddha, apparently plucked/stolen from his cremation pyre and passed down through generations.

Visitors to the temple aren’t able to see the actual tooth itself (it sits inside the smallest of 5 gold boxes, with each smaller box fitting inside the next like a Russian doll), but we did walk by its holding shrine to find hundreds of devotees that had made the pilgrimage to worship before it.

…and gawk at the uninvited patrons in the trees outside:

Before long, we were rumbling out of Kandy and into the mountains aboard what quickly became one of our favorite traits of Sri Lanka: the railways. Trains in Sri Lanka felt like more of a forum for social gathering than a mere means of transportation: families laugh and toy with each other, young kids hang out the windows and scream when the train passes through a tunnel, vendors hawk wadi-wadi and cups of chai to travelers, all while crossing through and towering over the most awe-inspiring scenery.

[Women in saris, waiting for a train…] 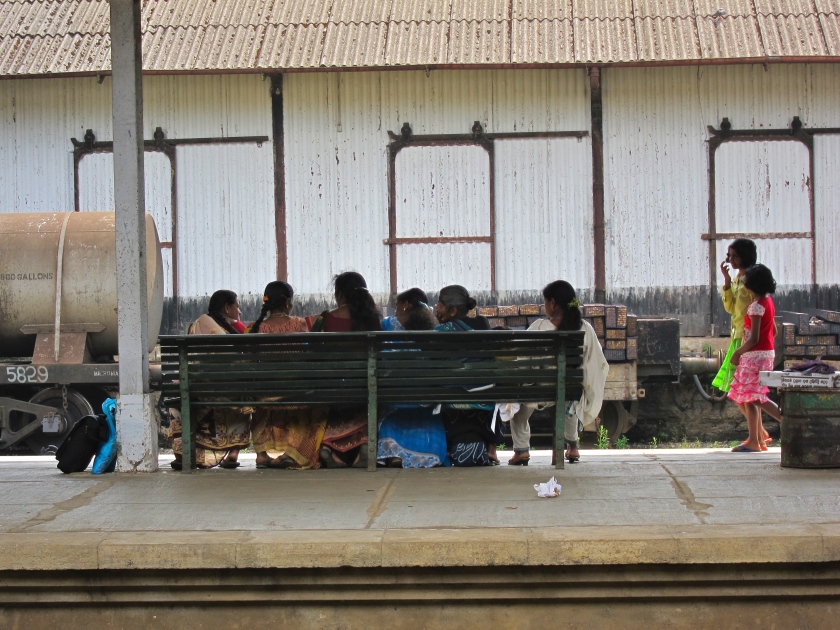 The only downside it seems is that the trains can get crowded– very crowded.

[fighting to get into the 2nd class train..] 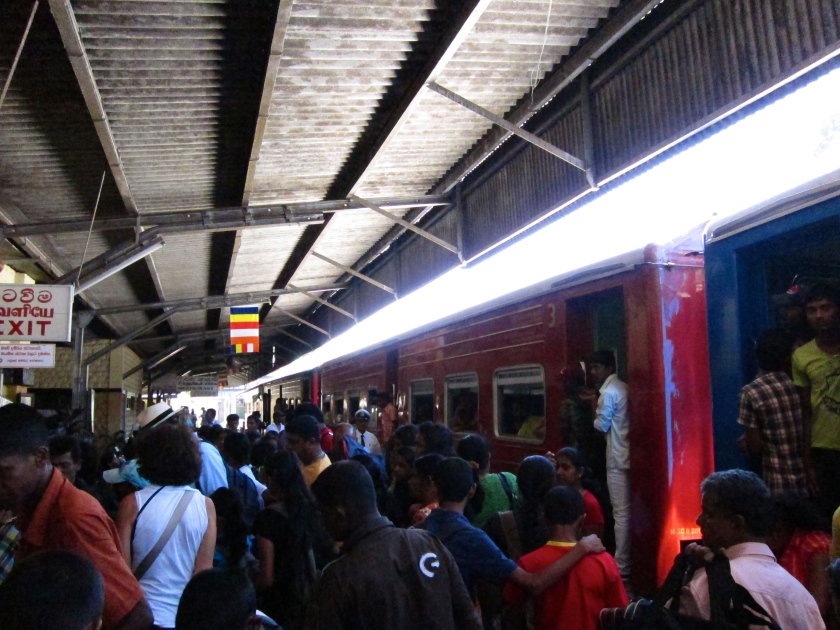 That first train into the Hill Country arrived packed to the gills – we grabbed our bags, held our breaths, and pushed our way into the packed car. But we had only been standing in the train car for about 30 seconds when a woman offered Steph her seat. Steph was eventually forced to sit despite repeated polite refusals, and before long we were part of her family (complete with little kids crawling all over Steph’s lap and all of us sharing a bag of chili-spiced olives). The dad took pleasure in my request for him to teach us some Sinhalese, perhaps too much… We didn’t know how to ask how much something costs, but we could say “you are beautiful”, “what is your telephone number?”, and “I love you; do you love me?”  Hmm. 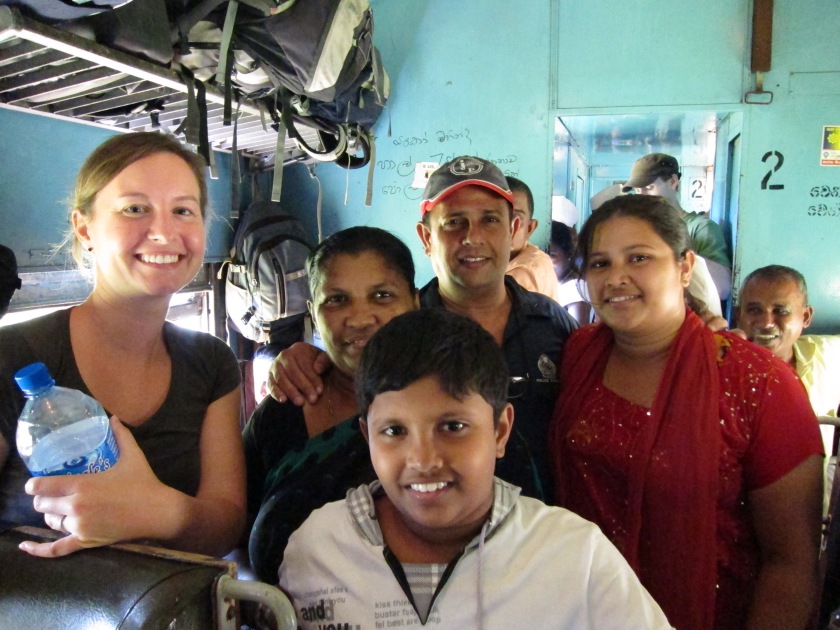 That train dropped us in Hatten. Our friends from the train helped us off, and in an early show of Sri Lankan hospitality, were the first of many to give us their phone number, even offering to pick us up from the train station if we ever needed a lift! In Hatten, we made a short and memorable stop for a dawn hike up Sri Pada. From there, we took another train, where we met a man named K.I., a school principal who was on his way back home after visiting a friend. We spent the afternoon chatting with him at the train station and later on the train itself, pointing out for us various natural landmarks and waterfalls of his beautiful part of the country. 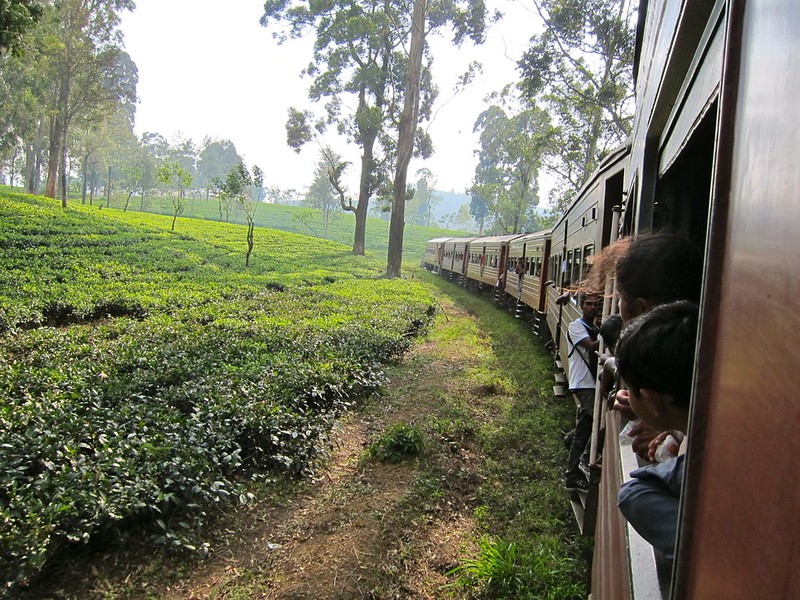 Just before the train reached K.I.’s stop, he bought us all a round of banana bubble gum from the train vendor, gave us his telephone number, and promised to check in with us later. 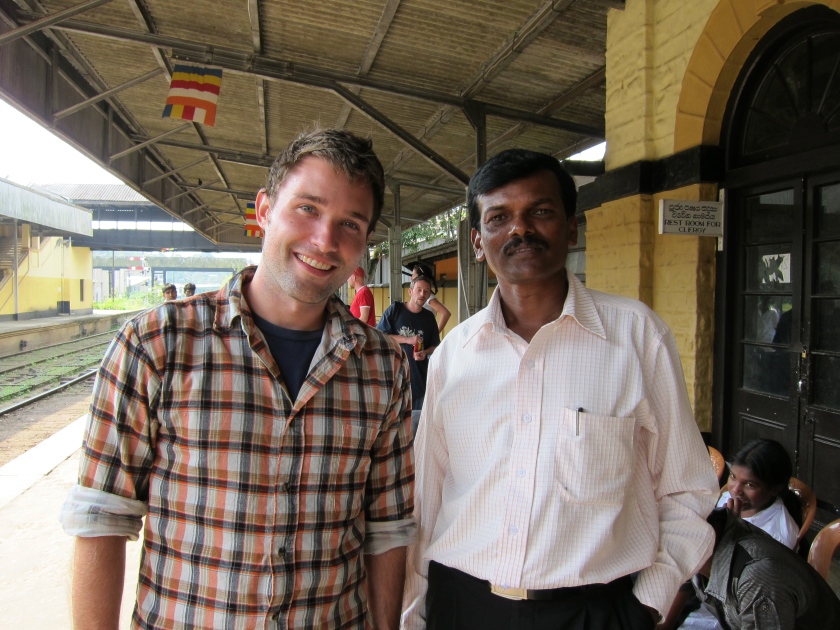 Several stops past K.I.’s house, we reached Haputale and settled into our guesthouse – just in time to catch a call from K.I., making sure we had made it. From that day, we received a call from K.I. every day until we left Sri Lanka. Given the language barrier, our conversations were pretty rudimentary, and nearly identical from day to day, but they somehow left us laughing every time he called and looking forward to hearing from him again.

In Haputale we stayed at a small family-run guesthouse where we were brought in as one their own – indeed, the father’s belief in tough love applied to us as much as it applied to his kids and we were politely scolded if we showed up to dinner a little late… which we never were again… after the first time.

[The view from our room:] 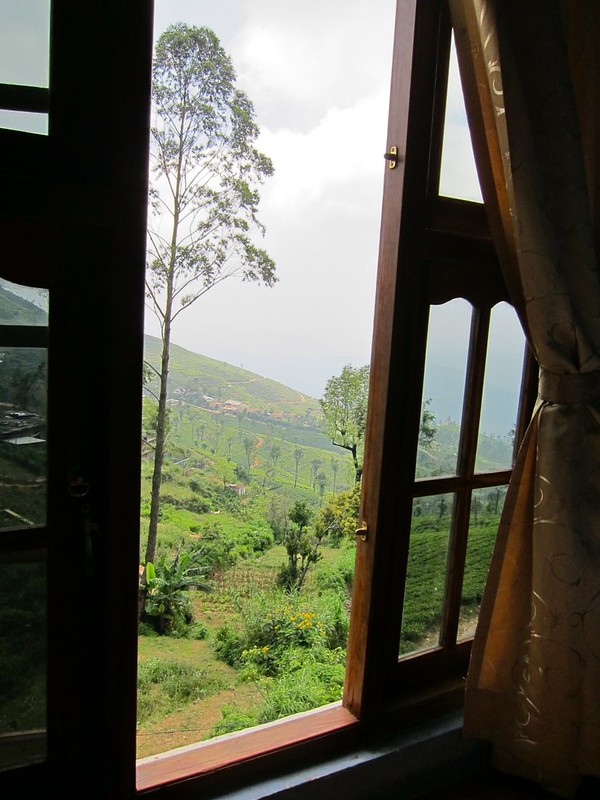 His wife was an amazing cook, and every night she would let us join her in her kitchen as she prepared our dinner, where she taught us to cook homemade coconut sambal, dal curry, string hoppers, Sri Lankan-style okra, deviled potatoes, squash curry…. 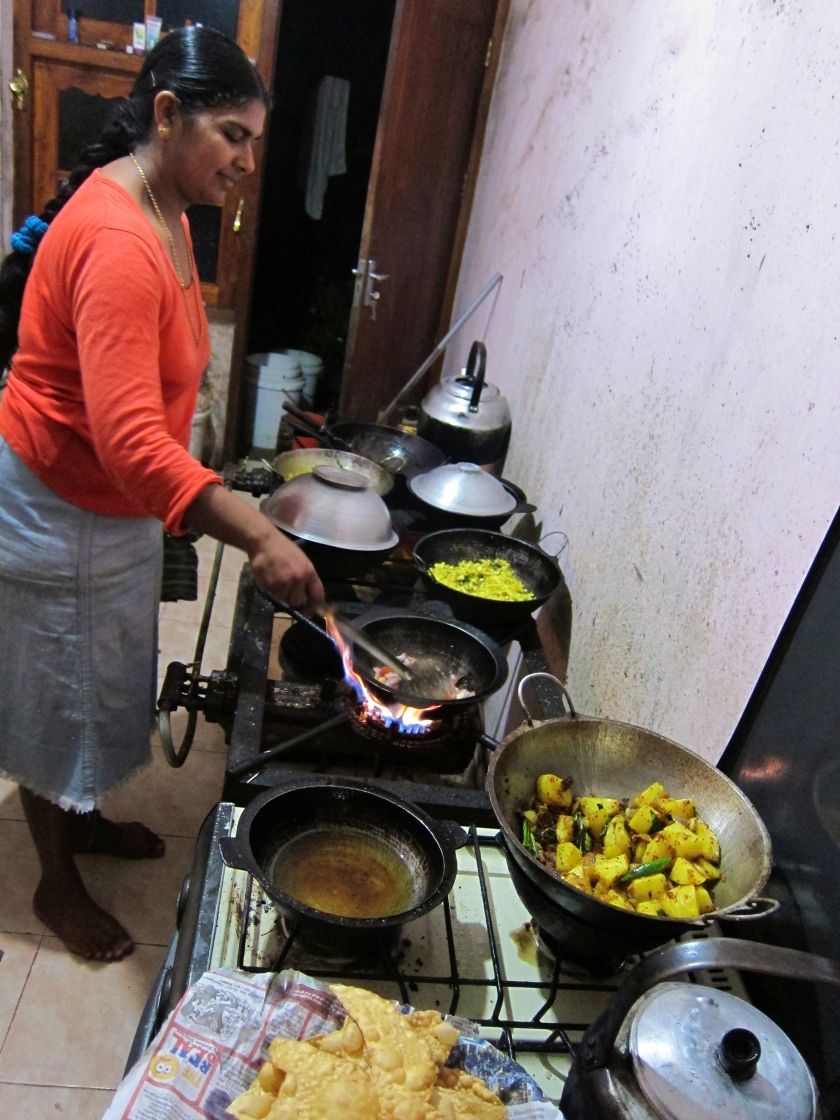 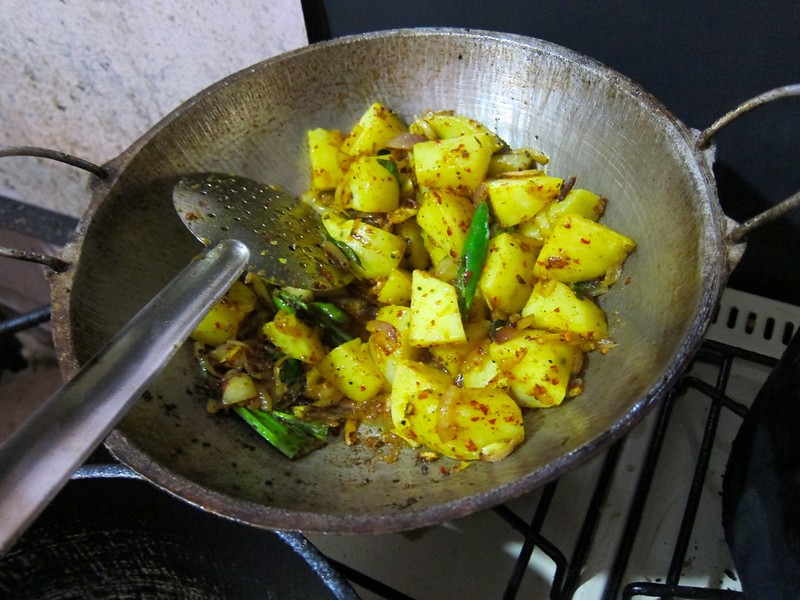 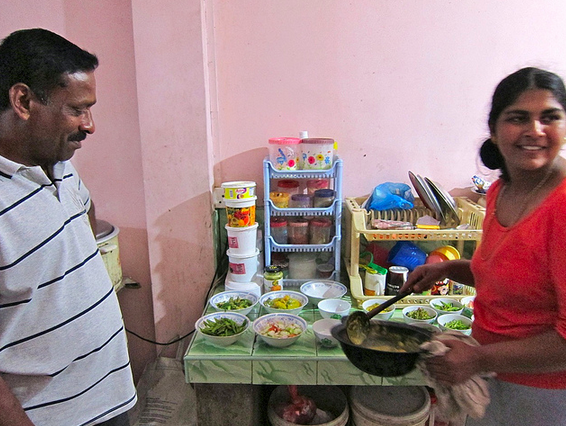 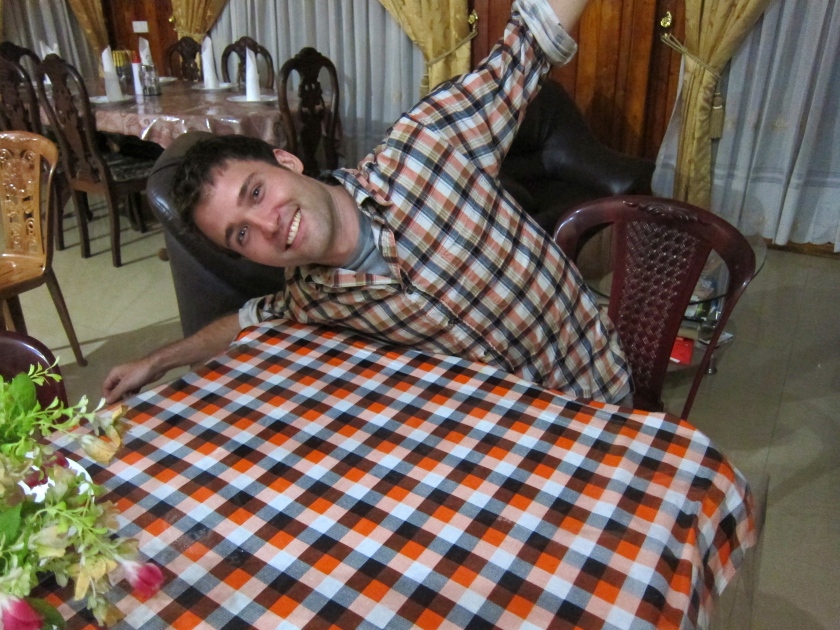 Setting out to explore Haputale the next day, we learned that the town is home to one of many British tea plantations that still thrive here and churn out Sri Lanka’s #1 export. We spent 5 days in Haputale, aimlessly walking the hills of the tea plantations, occasionally joining the locals on their walks home down the lonely train tracks. 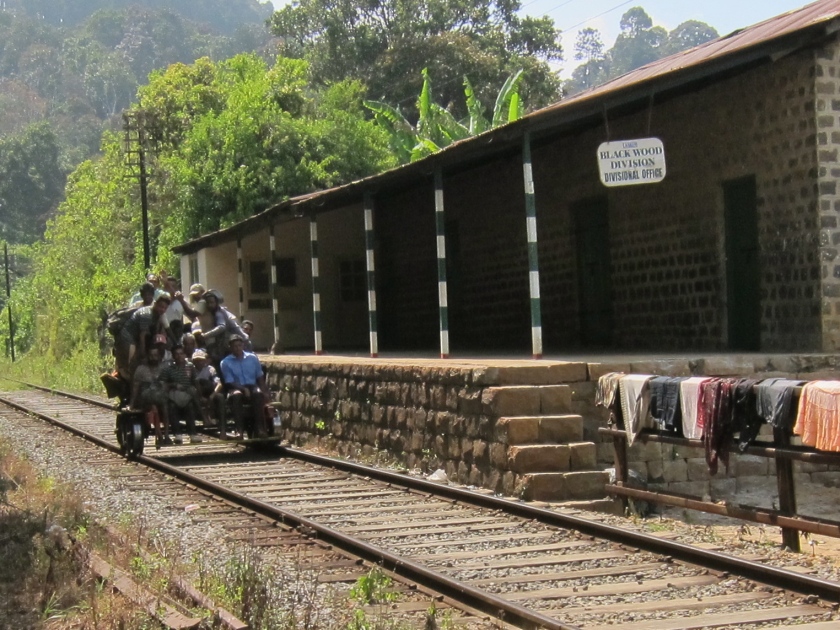 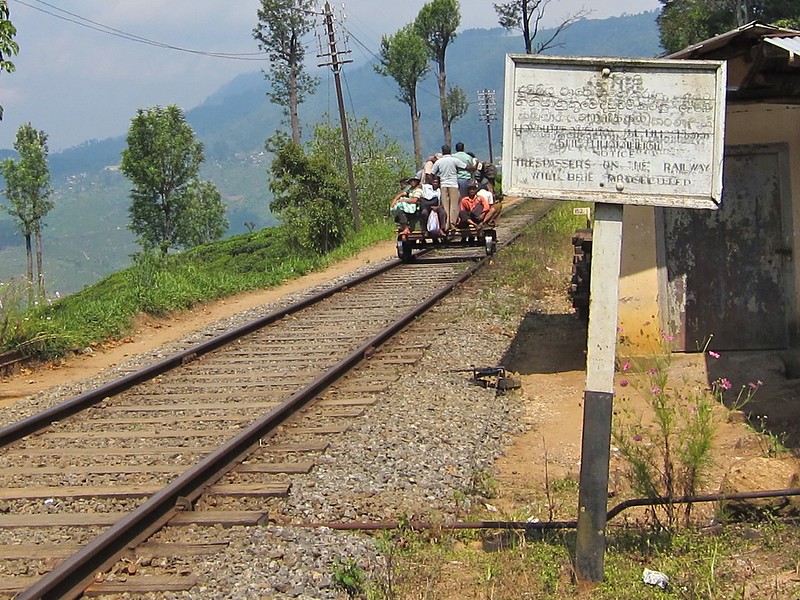 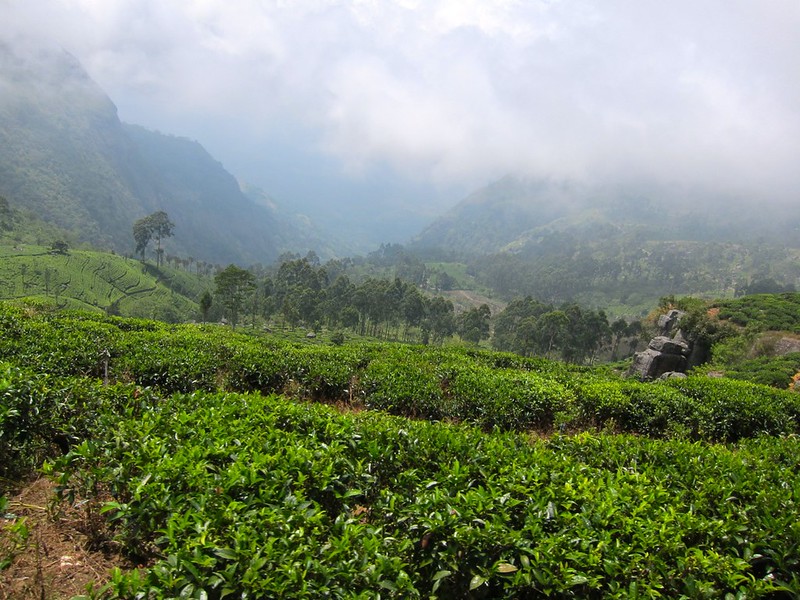 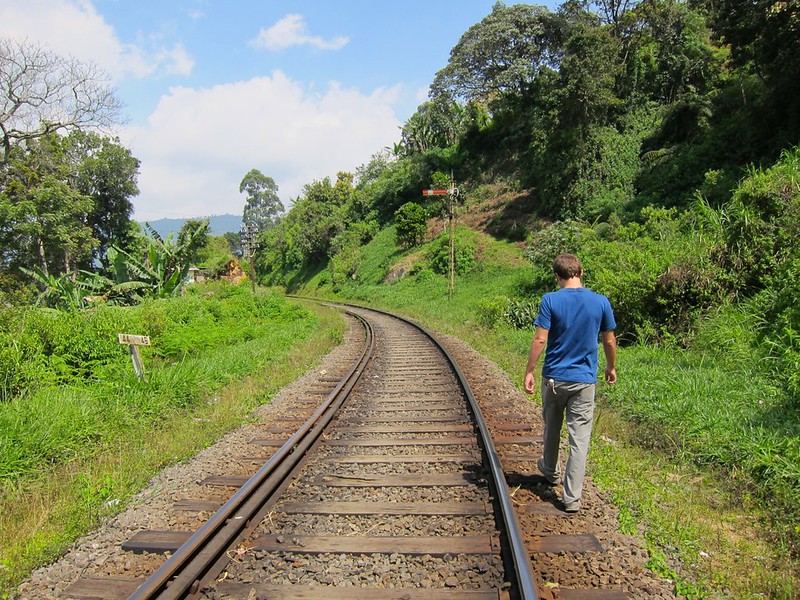 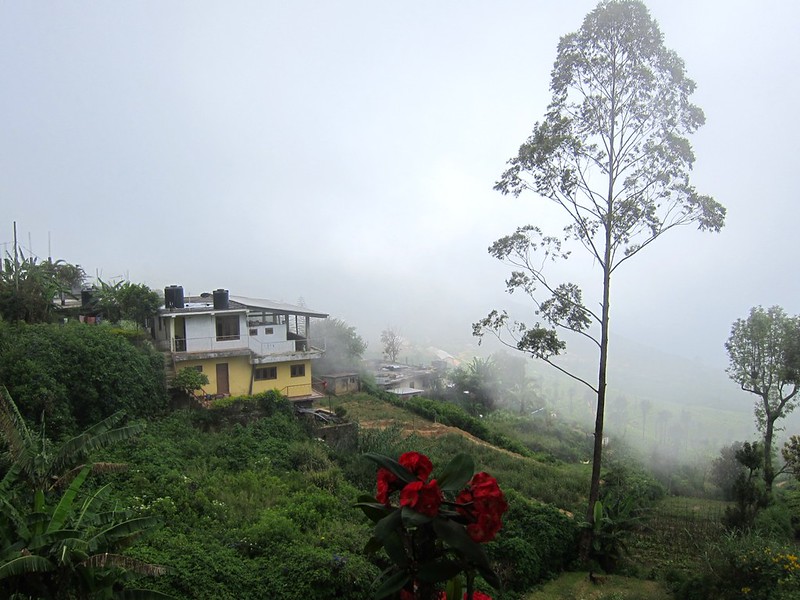 It would be fair to say we did little more than go on long walks during our 5 days in Haputale – but it wasn’t for lack of trying – on our first day we walked 3 miles to explore an old Benedictine monastery in the area, just to find that it was closed. We were later told that it is only open to visitors on national holidays, and lucky for us there would be such a holiday coming up in just 2 days. By the time the national holiday arrived, we’d decided to forgo the monastery altogether and visit one of the tea factories instead, so we hopped on a rickety old bus that felt like it would shake itself apart any second and traveled 30 minutes to the tea factory, and what do you know? 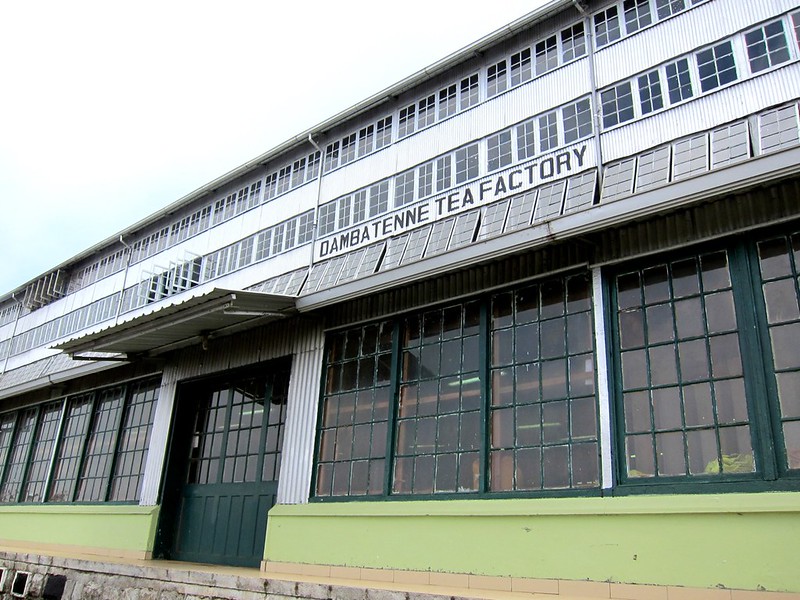 Closed! Apparently, the tea factory is open every day of the year except on national holidays.

Our last day in Haputale, we decided that we really had to “do” at least one activity in our time there, given that everything else had been closed: we would visit Diyaluma waterfall. Being the second tallest waterfall in Sri Lanka at almost 600 feet tall, we agreed to take a bus over an hour and a half each way just to check it out. I can’t exactly say it was “closed”, but let’s just say that its faucet wasn’t exactly “open” all the way at this time of year. It was pretty, but not the kind of thing worth spending all day trying to visit. 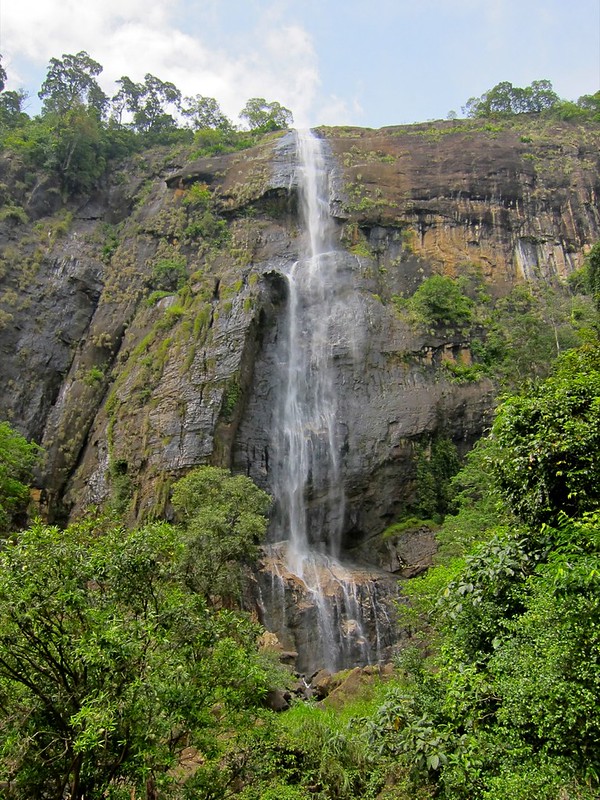 Before we could leave the town, Haputale had one more trick up its sleeve for us it seemed. While walking the train tracks one day, we decided that we wanted to try to smash a coin on the train tracks– something Steph had never done! Since trains are very infrequent, we were surprised to see a train heading our way halfway through our walk. Quickly, we put the coin on the track, giggling like 5 year olds, and stepped back to watch the magic unfold…

Once again, Haputale had other plans for us…

It was time to move on, but suffice it to say, we really enjoyed Haputale, in particular, the lush rolling hills that surrounded the dusty town itself. 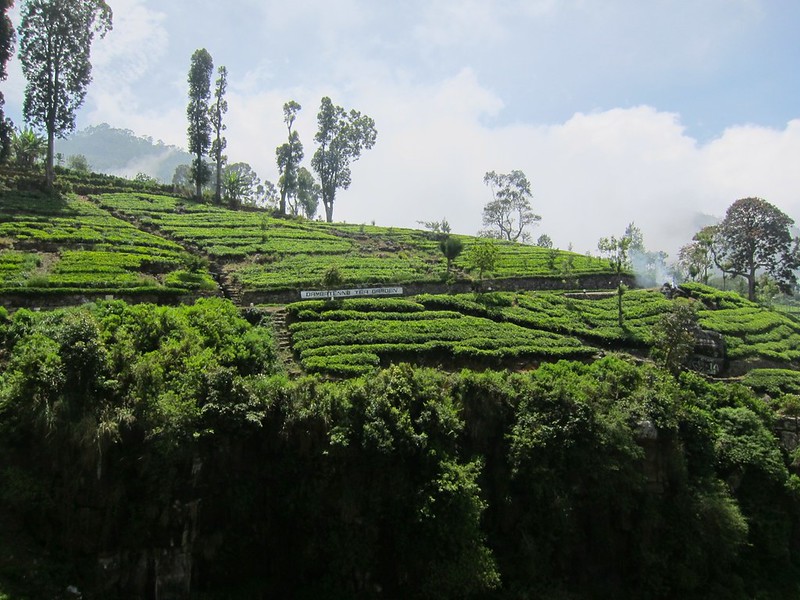 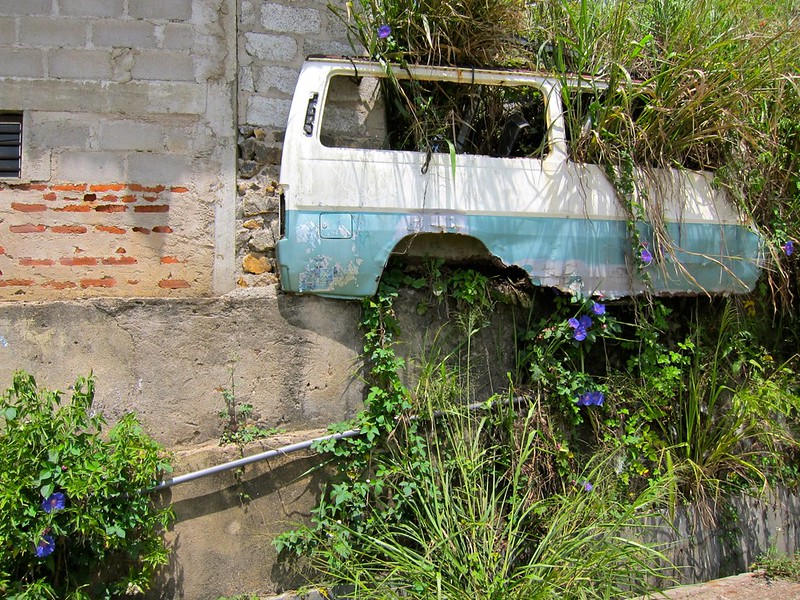 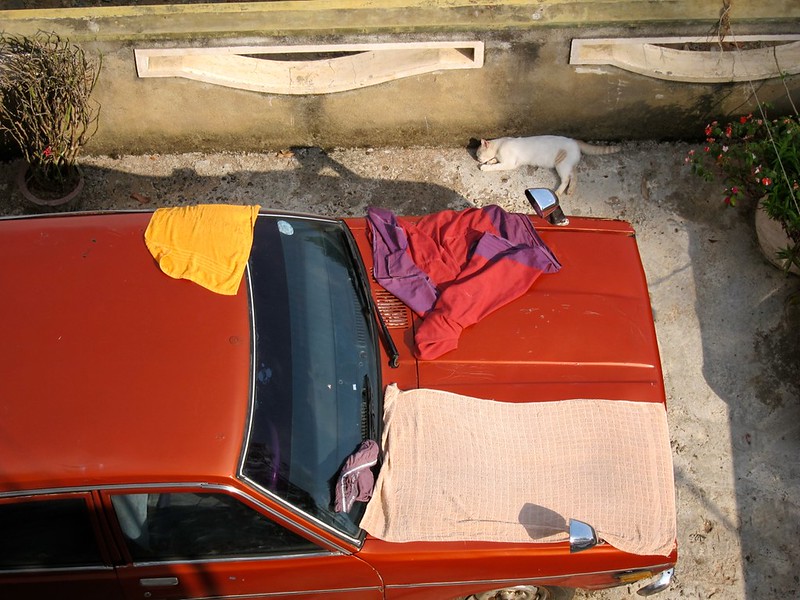 6 thoughts on “Rolling in the Sri Lankan Hills”