Like any good city, Luang Prabang was filled with new, weird, and potentially scary foods for us to try. The first thing we did when we arrived in the city was to head straight for the morning market, where we could see what the city was all about.

Because Luang Prabang is surrounded by water, much of the town’s food derives from the rivers, whether that is dried seaweed, catfish, or river eel:

A mother and daughter duo at the market were making hand-made spring rolls, where they made the wrappers by pouring batter directly onto a flat griddle, gently rolling them onto a stick to remove them from the hot surface intact, and stuffing them with a delicious spicy pork filling: 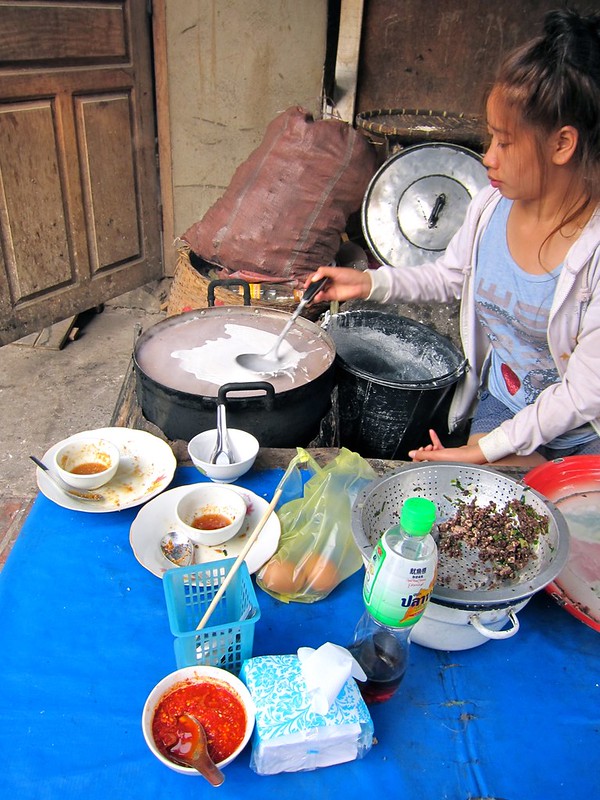 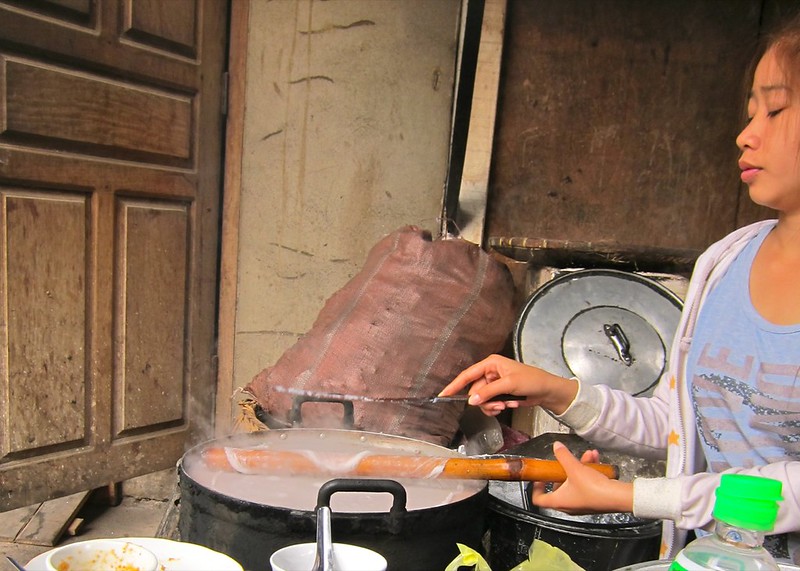 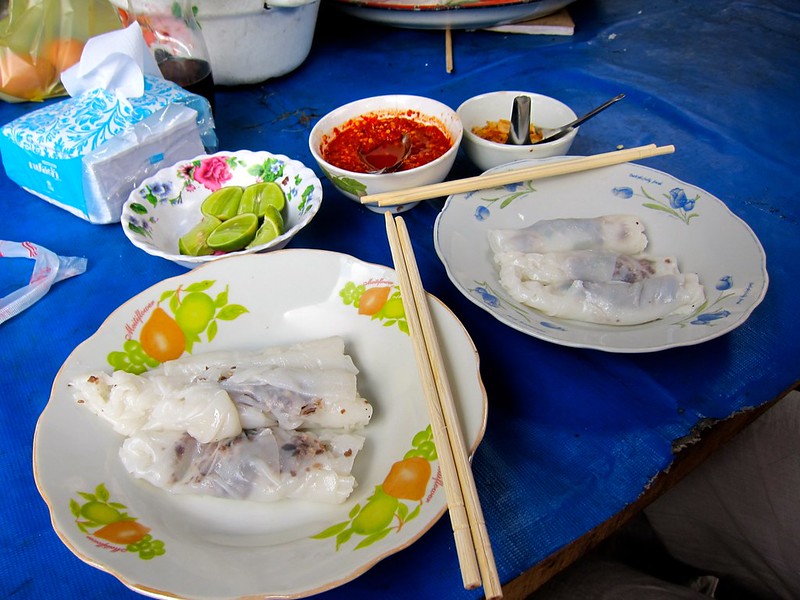 The night market didn’t have as many different options of food to try, but those that were there were delicious, including Lao-style Khao Soi (different from the Thai dish of the same name), 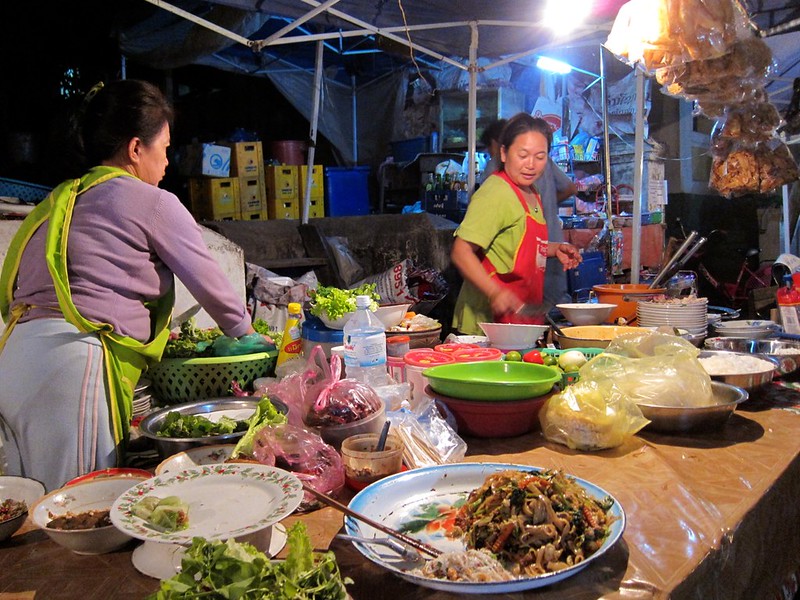 Lao-style sandwich (baguette with an assortment of goodies and the ubiquitous sweet chili sauce), 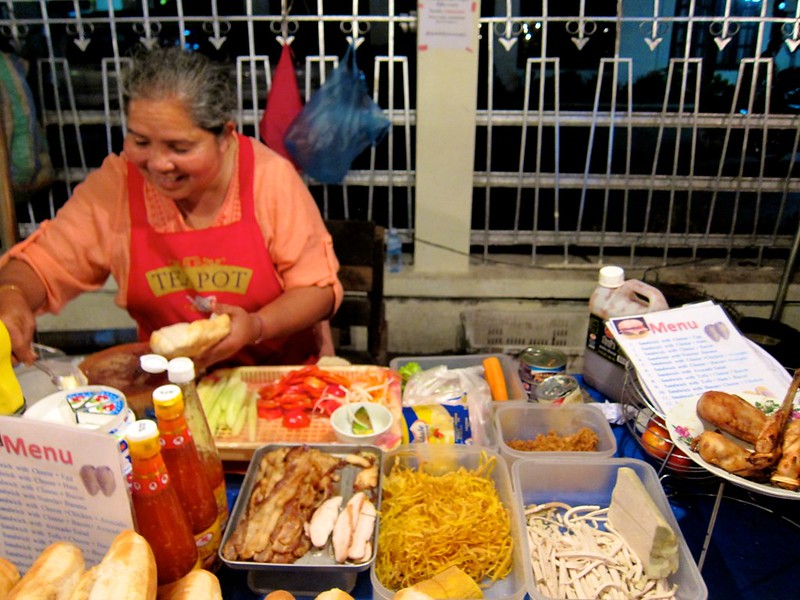 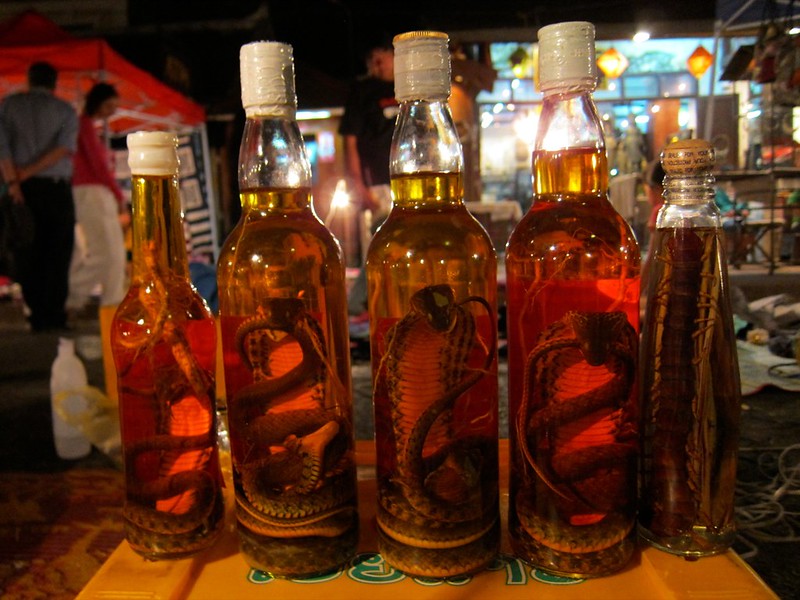 Also extremely popular in Laos are the water buffaloes – popular not for their incredibly cute faces or utility as house pets, but for their delicious chewy skin and moist meat! This packet of dried buffalo skin snack was poorly translated, at best:

Although we had gotten to try many of these little food gems over the course of our time in Laos, we had yet to really try anything more than the dishes traditionally offered in restaurants. For example, on a typical day for breakfast we would generally have noodle soup made of a rich broth, chicken, noodles, bean sprouts, lime juice, chilies, fish sauce, and torn lettuce pieces. This single meal generally tied us over until dinner, when we would either have Lao “laap” (ground meat with green herbs such as scallions and mint), yellow curry, or some kind of fried noodles. While these were always more interesting than anything I could ever make at home, we still felt like we had only scratched the surface of all that was to offer in Lao. So we signed up for an “adventurous Lao” tasting menu at a local restaurant, Tamarind. Although it’s called the “adventurous menu”, the tasting menu is supposed to offer customers a taste of foods that are traditionally eaten in Lao people’s homes every day – but that usually don’t make it onto restaurants’ menus (at least not onto menus that are written in English).  We had to order a day in advance, so that the restaurant would have time to gather the ingredients for the meal at the local market. And the best part: we were completely kept in the dark about what would be served. 🙂 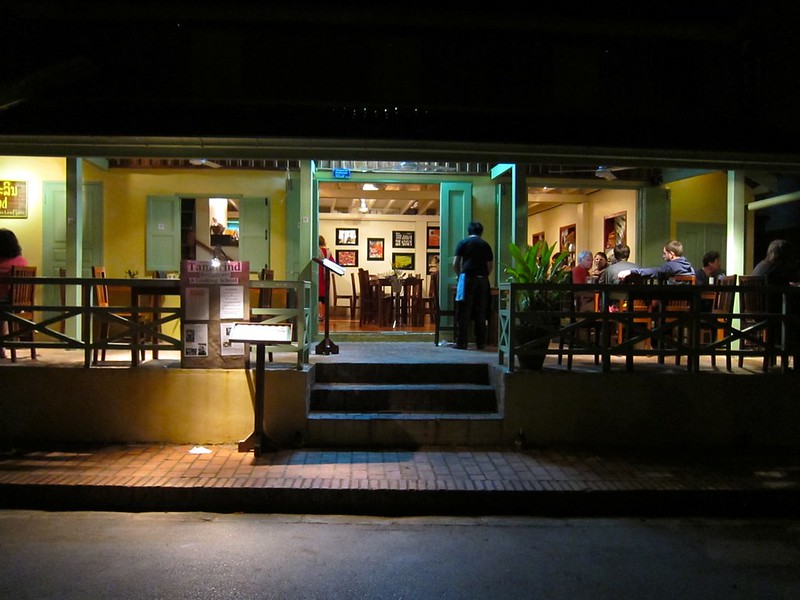 To start, Scott had lime lemongrass-flavored Lao Lao (local whiskey), and I had an amazing super sweet and spicy watermelon-chili granita: 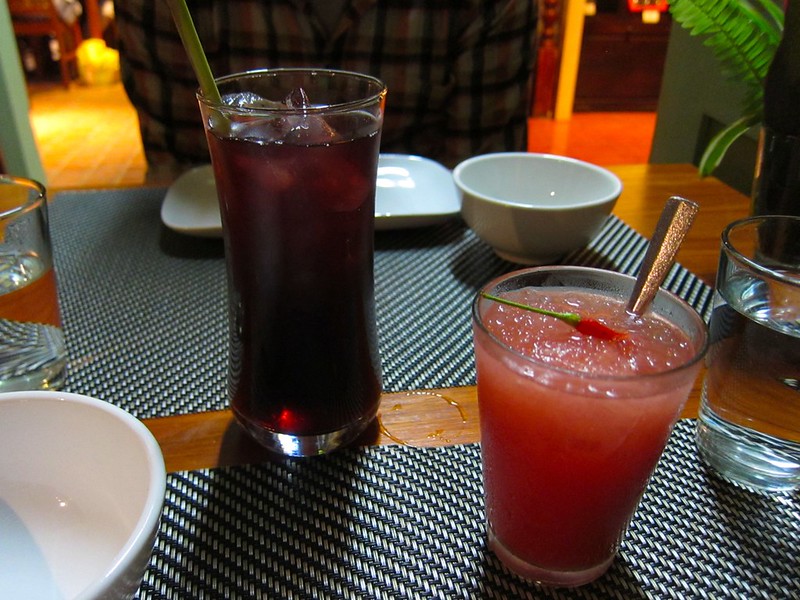 The first course of the meal was a sampling platter of vegetable-heavy dishes:  (descriptions follow below…)

1-Bright green egg shaped ball was a manicot seed, just there for display. The flesh of the seed was pulled out and mashed with loads of red chilies (right behind the seed in the pic). One bite of the flesh, and Scott and I looked at each other in utter shock while our minds tried to process this new and strange food on our tastebuds. It was the sourest taste that I promise anyone reading this has ever tasted, ever – unless you have had this dish, that is. It was an extremely intense sour flavor (but not in a bad way) that completely overtook all of our senses, as if all of the sourness in the world had been boiled down and concentrated into this one bite. Not bad, not my favorite thing either, just plain bizarre. And did I mention sour?

3- Dried river weed (type of seaweed). This was my favorite dish on this plate. Subtle, nice seaweed flavor. Easy to like.

5- Mashed lotus flower paste. Again, really strong sour flavors. But not as intense as the manicot by a long shot.

6- Hiding under a big green leaf, that white dish is rattan!! Who knew you could do more with rattan than just build furniture out of it. Well, the Lao people did. This dish was strange (I guess this is a common theme by now). Like a subtle, woody vegetable flavor. (How would you describe broccoli, for example? It just had a unique flavor that is impossible to describe unless you’ve tasted it.)

7- Strips of soft, plump buffalo skin tossed in ground rice powder. Tasted like chewy gluttonous pork with a slight bacon flavor tossed in a nutty powder. One of my favorites of the night!

9- In the middle of the plate, more river weed. Instead of being dried, this had been prepared in such a way that it made a slimy paste that was difficult to pick up since we were eating everything only with our hands. It tasted great, if you could get past the sliminess…..:)  A video to demonstrate the texture:

The second course was the meat-heavy part of the meal. This is where the real fun (or should I say sheer terror..same thing?) began….

First, we were served two soups. On the left, harmless chicken curry soup (full of all the “good” parts, of course…nubbins, organs, vertebrae….). On the right, python soup!

Now, most of you may know that I am deathly afraid of snakes. In fact, at the night market, I almost dropped the bottle of snake whisky as I was looking at it, even though I knew darn good and well what was in it before I picked it up and that the offending specimen was in fact dead. To have pieces of python set down in front of me, and be told that I would now have to eat it, sent my heart racing and my palms sweating furiously. At first, I really couldn’t even touch the bowl that it was in. But eventually, foodie prowess overcame fear, and I found myself diving in head first. The snake tasted like dark chicken meat covered in tough scales, and the soup was delicious and salty. This was one of the overall favorite dishes of the night for both Scott and me.

The remainder of the meat course (descriptions below):

1- White bowl: bamboo soup. Pretty standard vegetable soup. This was the one “safe” dish that we could go back to in between the scary dishes.

2- Stir fried whole chopped frog (not just the legs, folks) with peppers, onions, and loads of garlic. If you look closely, you can see the slimy skin and some bones. One of Scott’s favorite dishes.

4- Spicy papaya salad. I love papaya salad, but after having this version I believe I’ve been getting the more Western-ized version. This was delicious, but it was loaded with fish paste unlike any other papaya salad I’ve ever tasted. Quite good, but I like the Thai version of this dish a lot better…

5- Gray mush at the back of the plate: mashed up tadpoles!!! Like you would expect, this was super fishy and a little “muddy” tasting. Hard to take more than one bite. Really fun to try once though.

6-  On top of the cucumbers: buffalo stomach, cut up into strips and tossed with chilies and green herbs. A little gamey, but good. Tasted like, well, buffalo.

By the time we rolled ourselves out of Tamarind, we were pleasantly surprised that the dishes that we had been given were not just presented to us for shock or “weird factor” but were traditional, everyday dishes. Some of the dishes (the buffalo stomach, for example) would be for special occasions; others (the manicot paste and lotus paste) were eaten every day in typical Lao households; some of them were delicious, others I would never want to see again – but really, that’s not what’s important. At some point, eating becomes not just about calories but about going beyond our comfort zone and about delving a little deeper into another culture. Delicious or detestable, unfamiliar or even downright scary, it will always be rewarding.

One thought on “A culinary tour of Laos”