After leaving Phonsavan, we endured a gut-wrenching, 8 hour minibus ride north through the mountains to the ancient city of Luang Prabang, Laos. The trip took us through the most awe-inspiring mountain scenery, where the perfectly clear, sunny day offered unending, seemingly more and more beautiful views of towering rocky karsts and rolling green hillsides covered in purple-white plumes of pompous grass.

While the only 3 foreigners (including us) in our minibus happily enjoyed the scenery, each and every local spent the entire time vomiting into little plastic baggies they had brought along for the ride. At one point, a Lao woman asked the driver to pull over, after which 3 women in neat, beautiful traditional clothing piled out and proceeded to hack up their breakfasts right onto the highway!

As we wound our way farther from Phonsavan and deeper into the lesser-developed parts of Laos, we passed countless hill-tribe settlements perched on the edges of the narrow mountain roads. In the early hours of the day, women and girls in traditional black wrap skirts collected firewood from communal wood piles and cooked over wood fires. Later in the day, it seemed entire villages would gather with their wash buckets at the side of the road to bathe in their sarongs, when the afternoon sun was at its hottest. Although our earlier visit to the country’s capital, Vientiane, had made Laos seem a more wealthy country than its current infamous title of “the poorest country in Southeast Asia” might suggest, it was clear that whatever wealth the country had did not extend beyond the capital; all of the settlements that we passed appeared to be self-sustaining, with large gardens and nothing more than river water for bathing, cleaning, and drinking.  The juxtaposition between the shacks made of woven palm fronds in which they lived and the million-dollar views they enjoyed was striking – uplifting, even. 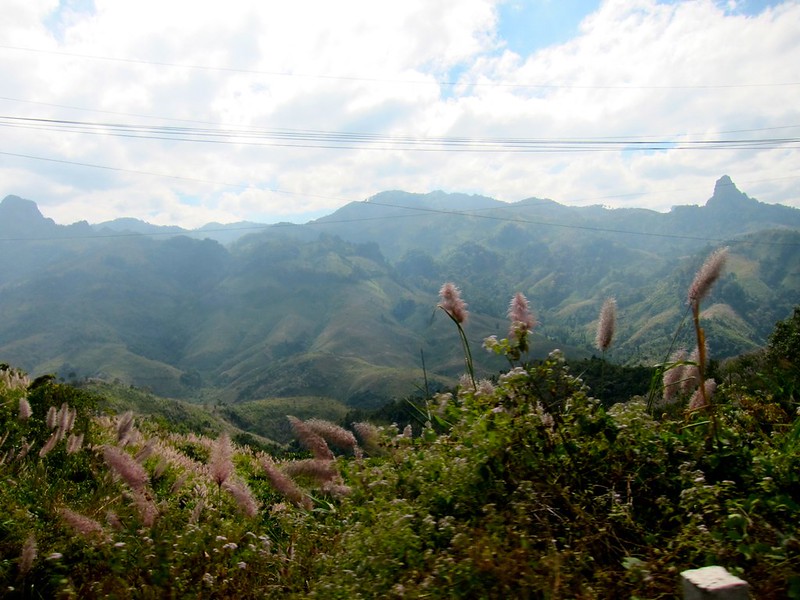 As the mountains began to fall away behind us and the sky began to open, we finally reached Luang Prabang, the former capital of Laos and the current UNESCO-protected pride of the country. Bordered on one side by the mighty Mekong River and by the Nam Khan River on the other, the historic district of Luang Prabang is situated on a peninsula, criss-crossed by a myriad of tiny one-lane cobblestone streets that only become more quaint by night when old gas lamps light the paths. 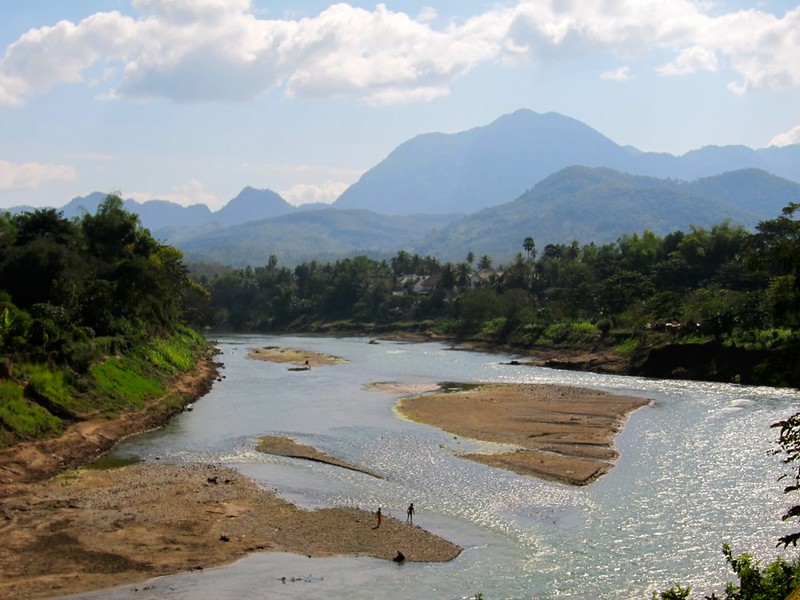 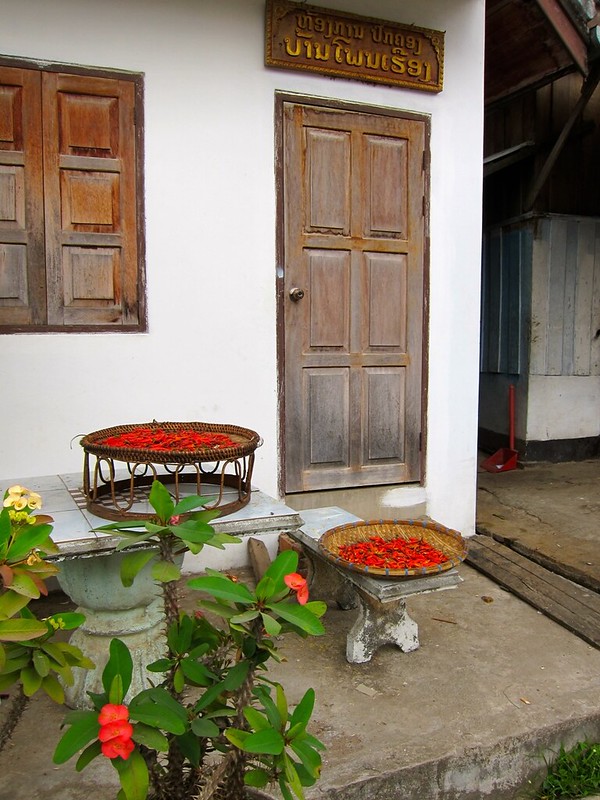 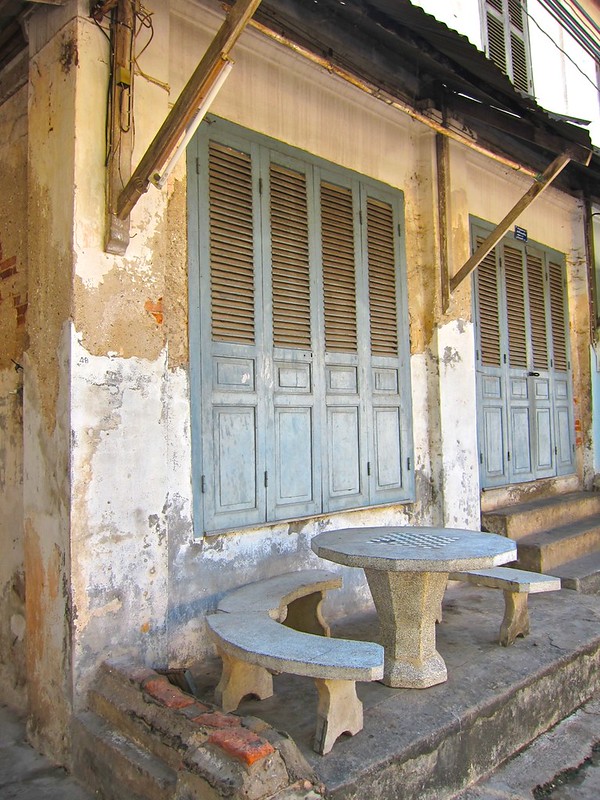 Perhaps the only thing more abundant in Luang Prabang than adorable, picture-worthy side streets are the monks! Currently, there are 18 monasteries in central Luang Prabang, with no less than 1200 monks of all ages living in them. 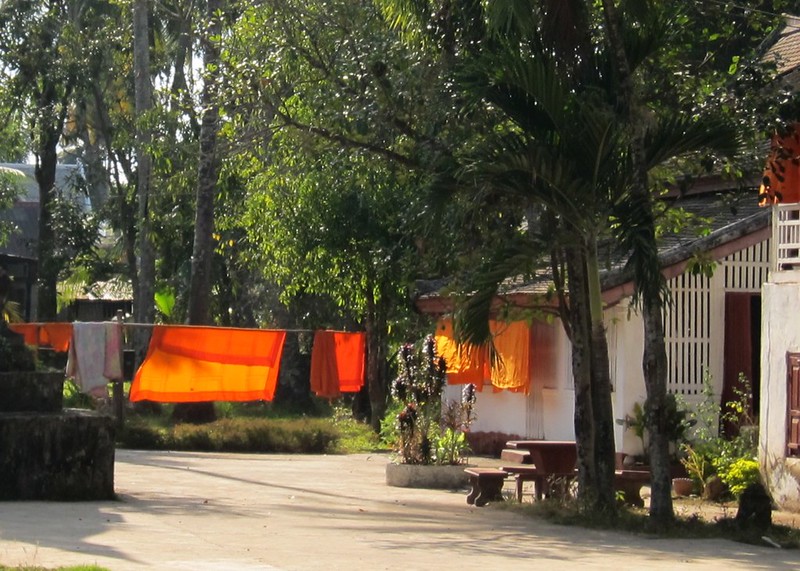 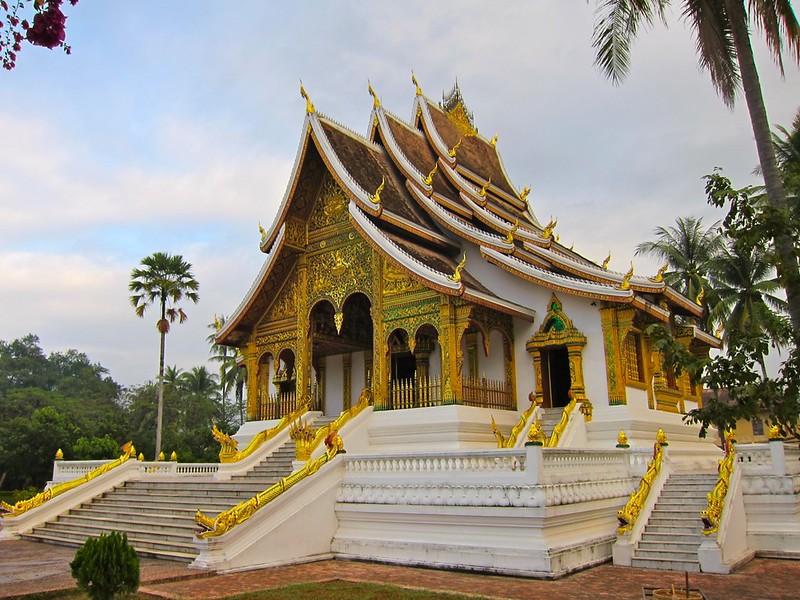 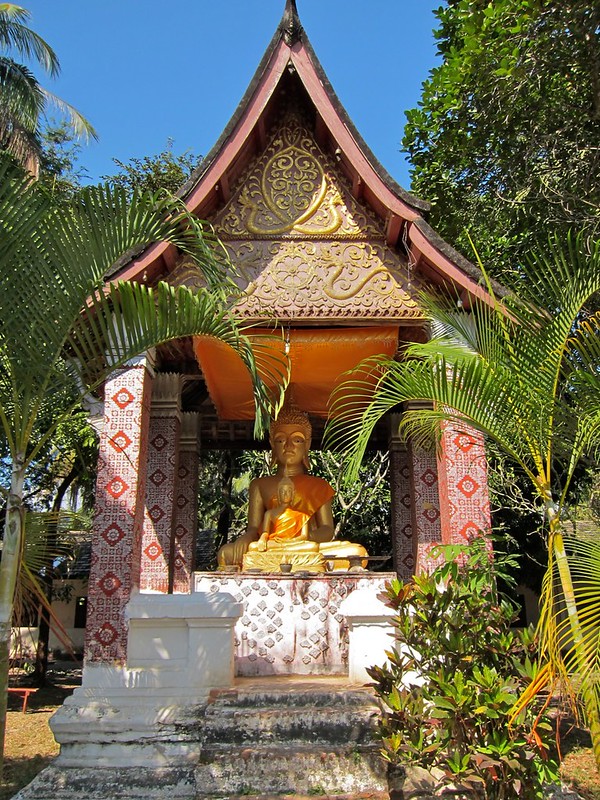 (Below, monks’ rice powder rolls drying on the side of the street):

One of the most famous temples in Luang Prabang, Wat Xieng Thong temple, built in the 1500’s, depicting the Tree of Life on one side: 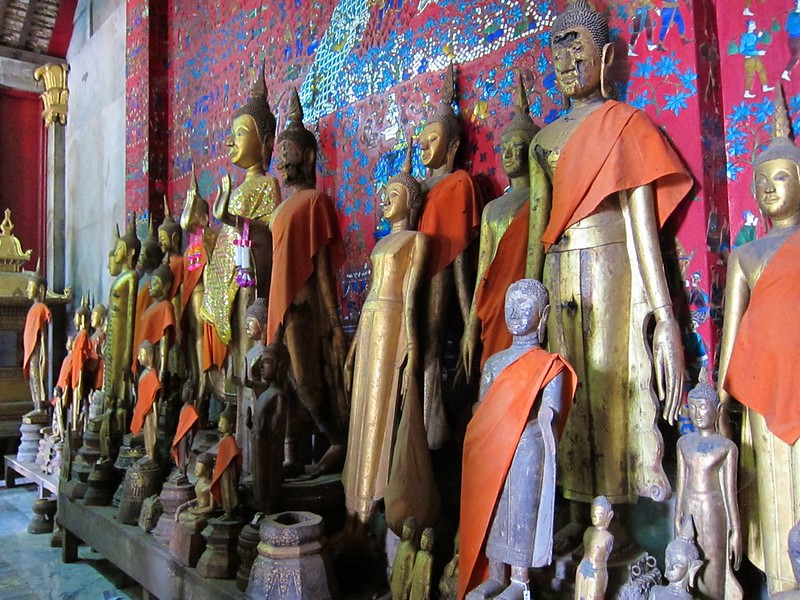 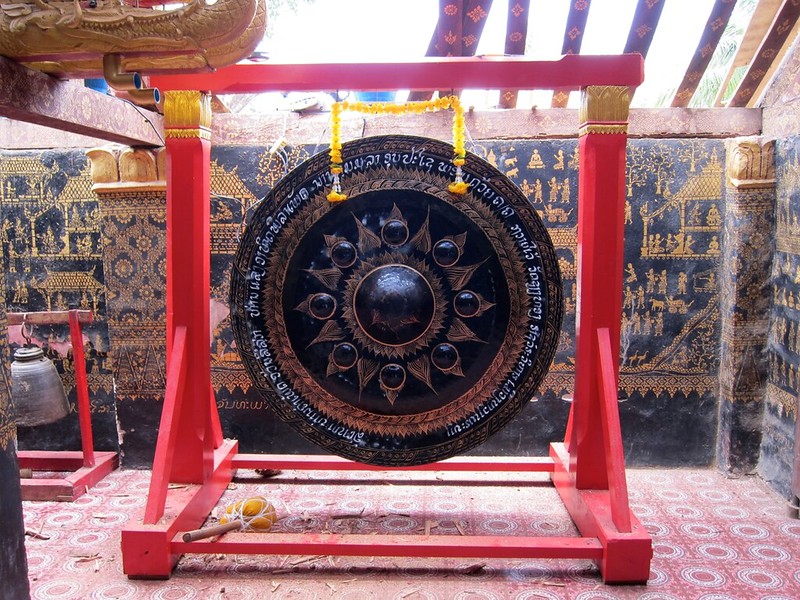 Every morning at dawn, the monks living in Luang Prabang line up for the daily alms-giving ceremony, in which local Buddhist people make “merit” by giving sticky rice or other food to the monks in exchange for a happy and healthy life. The monks then bring the gathered food back to their respective temples to share with the other monks for their one meal of the day. Unfortunately, this once-serene ceremony has now become a crazy tourist attraction dominated by camera-toting day-trippers who seem to care little about the reverence of the ceremony itself and more about getting that perfect shot (although I’m not going to get into that here, there are plenty of articles online that elaborate on the issue). We did manage to witness some of the alms-giving on a small side street, where we accidentally got to see another side of the ceremony:  after the monks received food from the alms givers, the monks gave whatever they could afford to give to local beggars, who, in the eyes of the monks, have even less than they have. Here, we saw several children begging for food from the monks. They were rewarded with huge hunks of sticky rice and bananas:

Monks returning to their temple:

Children, happy with their fill:

As you may have gathered, Luang Prabang is a very religious, quiet, relatively conservative city. Add to that the fact that the communist Lao government has issued a country-wide curfew of 11:30 pm for its residents, and you might reason that Luang Prabang is perhaps THE single worst place to spend New Year’s Eve in the world. But since it was just where we happened to find ourselves anyway, we gave it our best shot by starting out a local joint called Hive Bar…

…the bar happened to be holding an ethnic fashion show, which showcased a collection of traditional Lao clothing from around the country: 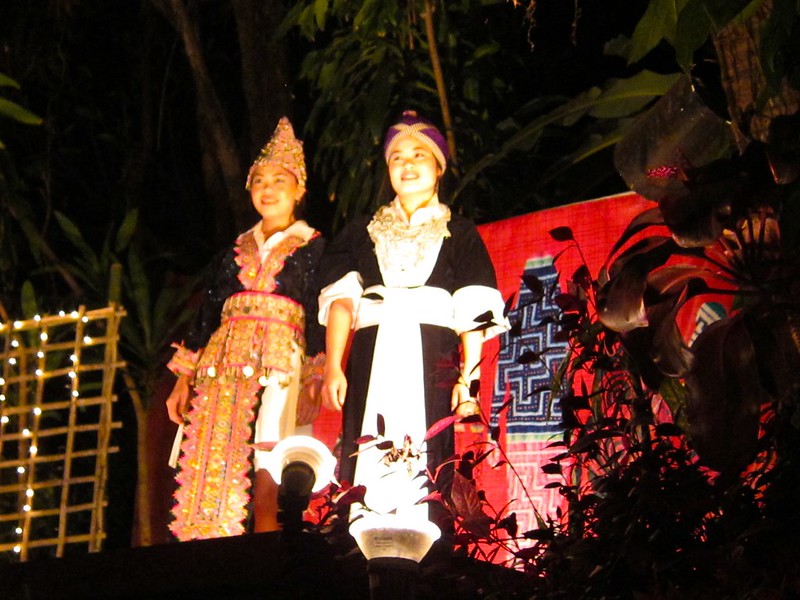 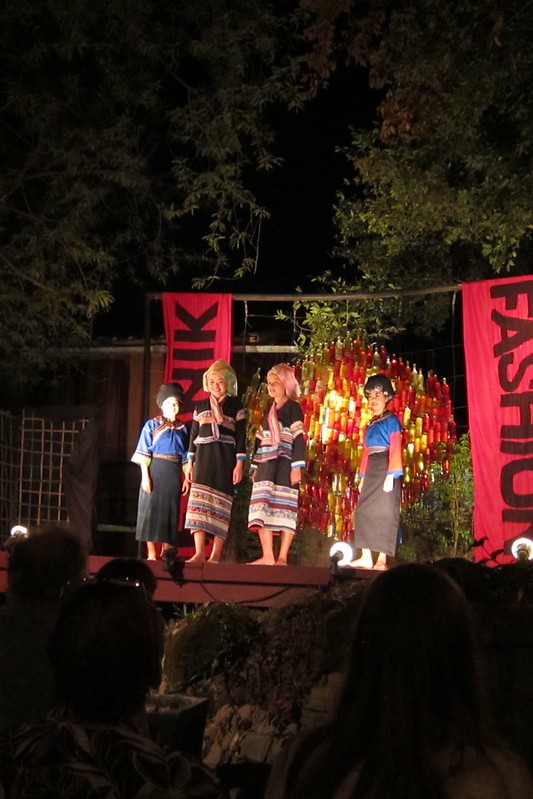 The fashion show was followed by a local break dance troupe:

They were incredible, but the real star of the show was the tiny tot breakdancer who always overstayed his welcome in the spotlight by just a few minutes every time…

After the fashion show, we poked around at the bar next door, where we found out they were launching Thai New Years lanterns, paper lanterns that can be lit at the bottom, causing them to fill with hot air. Scott and I lit one, made a wish, and sent it floating off into the sky!

Eventually, we wound up at Hive Bar and, as usual, I really wanted to dance but the turnout on the dance floor was pretty bleak. To break the ice, Scott and I invented a game where the person wearing the silver party hat had to dance in the middle of the circle, at which point that person got to choose who would wear the hat next (I didn’t say it was clever).

By the time we had each had a few turns in the middle, I was best friends with one of the local girls.

I wish we had thought to exchange contact info!

By the time 11:30 pm rolled around, we were all waiting to see if we would get kicked out by the police to return to our guesthouse. Luckily, they had extended the curfew to 1 am for New Year’s Eve! Funny thing is, though, the bar staff would have missed midnight completely if Scott hadn’t asked them how many minutes were left until 2012… when they saw that there were only about 45 seconds left, there was a huge scramble for champagne! For the record, a Lao countdown to midnight is pretty similar to an American one, with lots of cheering, hugging, and dancing (minus the kiss, of course).

Around 1:00 am when the bar closed, we found ourselves piling into a tuk-tuk with a local and another American couple to go bowling (the only spot in town that is allowed to stay open late)! Unfortunately, we had even managed to surpass the bowling alley’s late hours, as it was just shutting down by the time we arrived. Luckily, the food stall next door to the bowling alley was just picking up steam at 3 am, so we grabbed some much-needed fuel consisting of baguette stuffed with chicken, cilantro, and spicy mayo and finally called it a night.

The next day, we managed to rouse ourselves out of bed just in time to catch a gorgeous sunset (you read that right). For the best view, we hiked up over 300 steps to Phousi Temple, which sits on top off a hill that dominates the center of Luang Prabang: 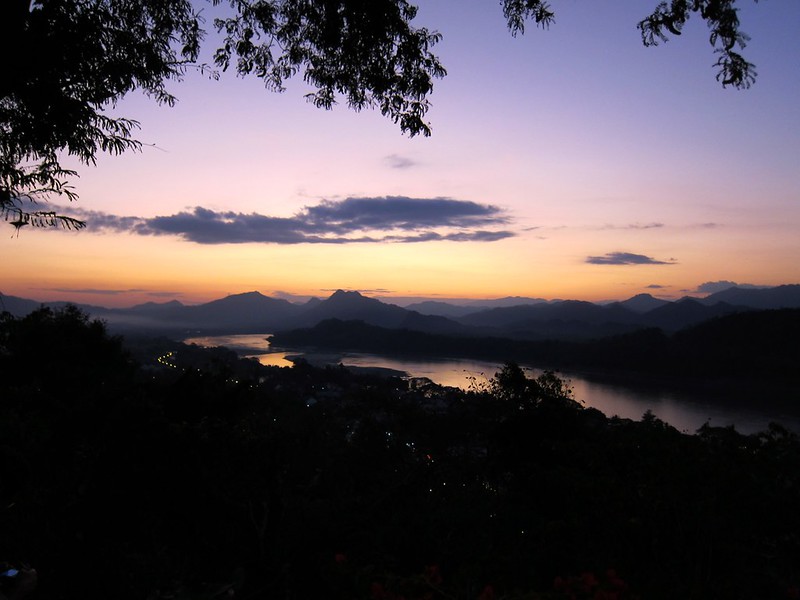 Offerings, tucked away on the side of the temple:

As if just one night of celebrating the New Year wasn’t fun enough, we had heard rumors from other travelers that the people of the Lao Hmong tribe hold a week-long festival to celebrate New Years (..for a conservative people, they sure know how to party!). So throughout the week we kept asking local people in town about where to see the Hmong New Years festival, but no one seemed to know much about it. If anything, they all thought that the festival had ended a week earlier. So one day we decided to rent bikes and go hunting for the elusive festival ourselves. We had some semblance of a direction, so we shot off across town and started venturing down different side streets, until Voila!! Hidden down a totally unmarked dirt road across the bridge from the main town was an enormous carnival extravaganza full of rides, games, and hundreds of people in ornate, traditional Hmong clothing. 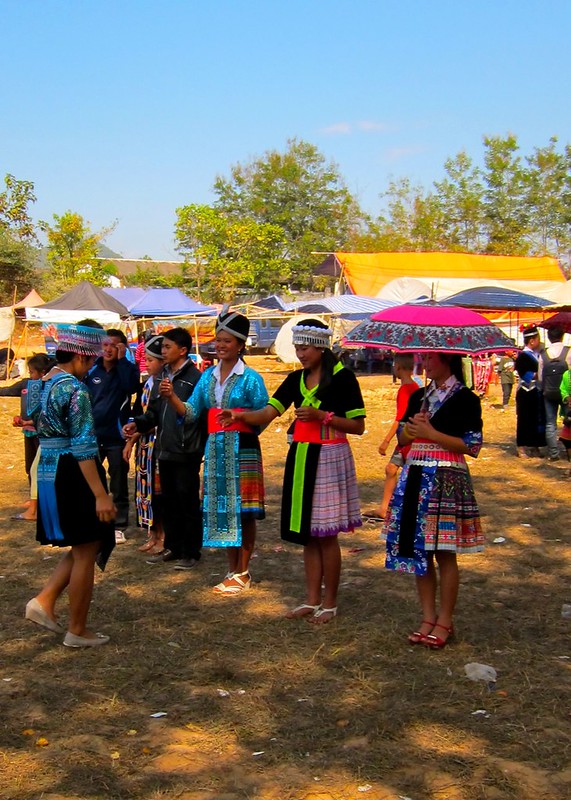 (Below: nice Hmong woman (with grandchild) who watched in amusement as her daughter’s spicy papaya salad drew fire from our mouths and snot from our noses!)

Scott trying to win a stuffed animal for me at the dart-throwing game (we were both horrible at it, to the amusement of the giggling costumed girls behind us)! 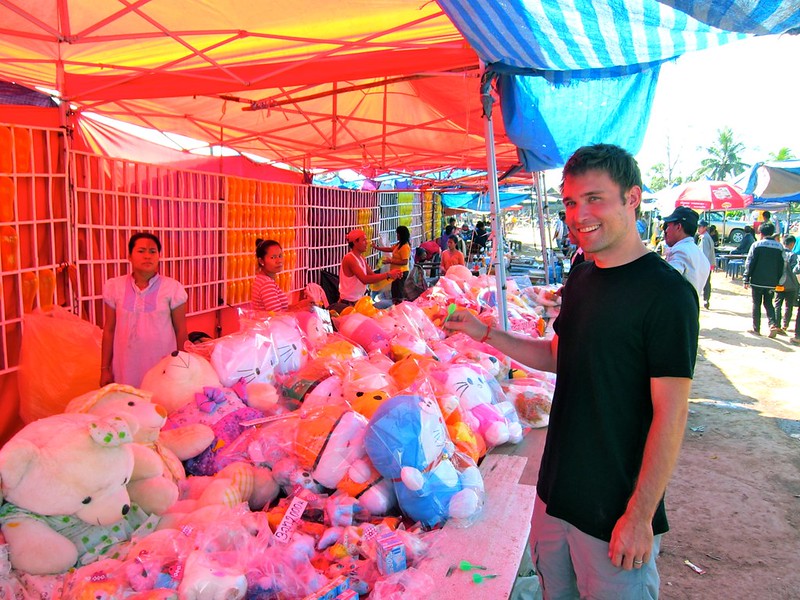 In one of the most fascinating scenes we had witnessed in Lao, a young woman (pictured in costume below) threw a yellow tennis ball back and forth with a guy for over an hour, while dozens of people and family members watched intently.

We learned that this is the traditional dating ritual between Hmong people, where young people throw a ball back and forth to simply “hang out” and see if they like each other and want to get married (…invented by parents who want to keep their kids as physically far apart as possible while dating, perhaps?). We quickly spotted the little cluster of grandmas gossiping off to one side of this couple, surely contemplating the final “outcome” of the game. At one point during the ball throwing, the girl started singing a very complex traditional song, and all of the men started pulling out their tape recorders that they had apparently brought along and recording her singing! I asked a man next to me why the men were recording her (thinking that these were the dads who were judging the fitness of the girl as a wife by her singing), but he simply responded, “They’re recording the song so that they can listen to it later.” Hmmm… got it! 🙂

(notice the many recorders whipped out below)

At the end of the day, as we were walking to retrieve our bikes for the ride back to Luang Prabang, we walked by the couple again, who were no longer throwing the ball but had moved on to the next stage – chatting. Another successful New Year’s celebration, it seemed!

We spent quite a while in Luang Prabang even after the New Year’s ball throwing had long ceased, so stay tuned for a future blog post on the rest of our time in this amazing city.