Aside from being a beautiful place, Chopta is well-known as being the base village for those wishing to climb Tungnath Mountain, one of the highest Himalayan peaks in India. We didnt really have plans to climb the mountain before arriving it Chopta, but it was there, so, we did.

The morning of our climb, we stuffed some Digestif high-energy biscuits in our pockets and set out from our guesthouse a little past 6 in the morning.  The weather was clear, and the view of the Himalayas was just incredible. 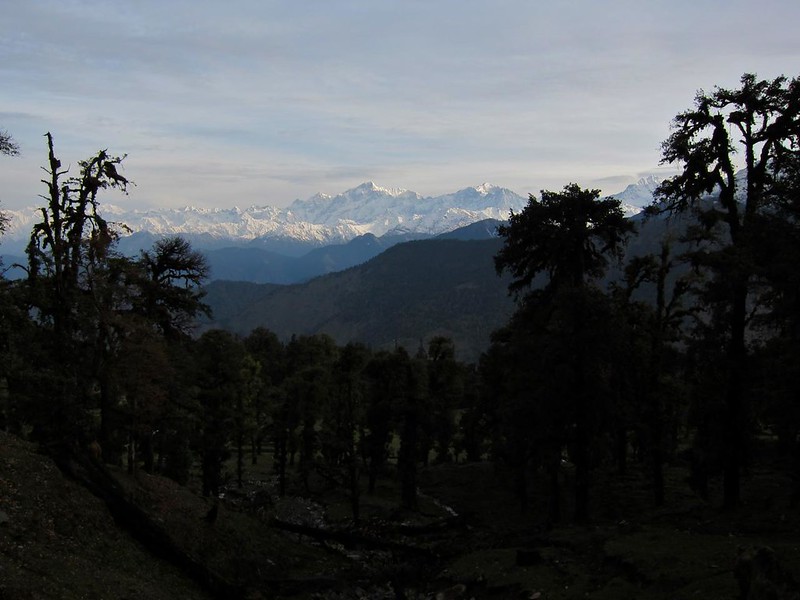 About 4km up the hill from our hotel, we reached the village center of Chopta, which we discovered is not much more than a couple of noodle shops, a guesthouse, and a few single-room shacks for the 30 or so residents who live there. 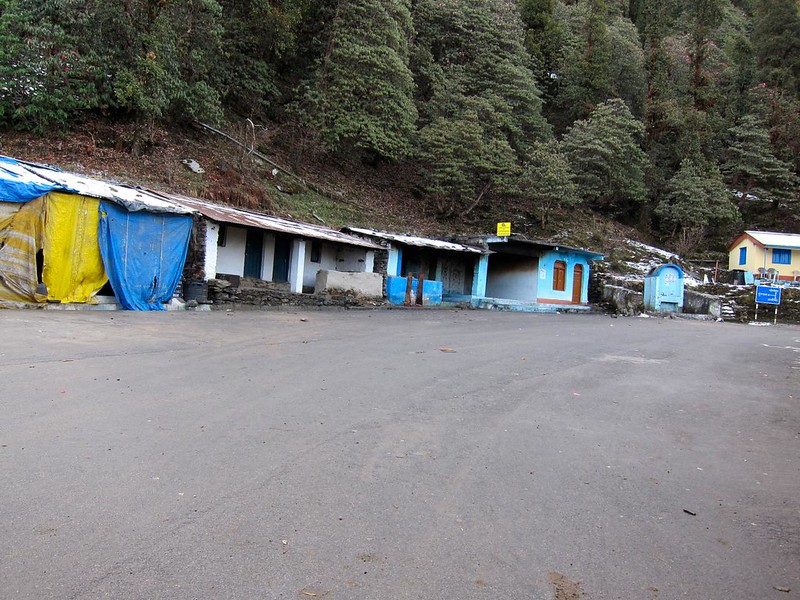 ..well, that, and adorable sheepdog puppies… 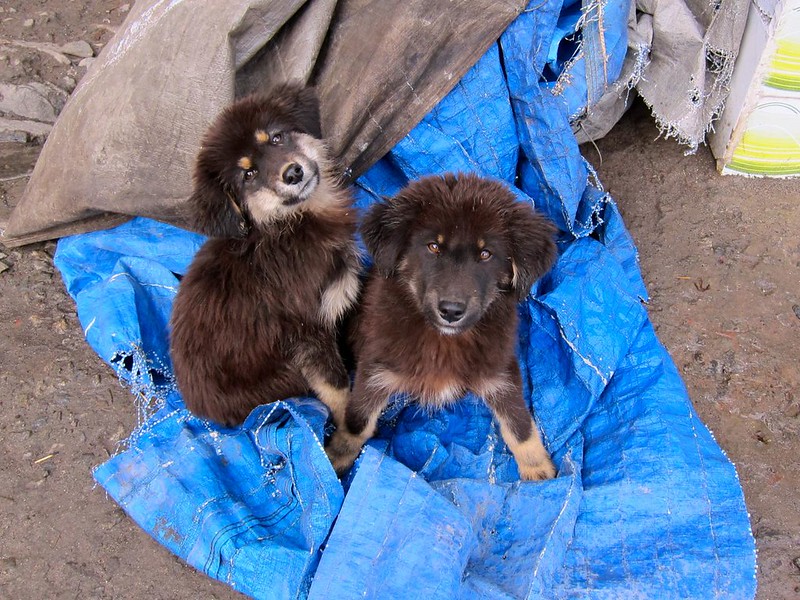 From there, we passed under the arch that marks the start of the climb up Tungath, ringing the bell as we went. 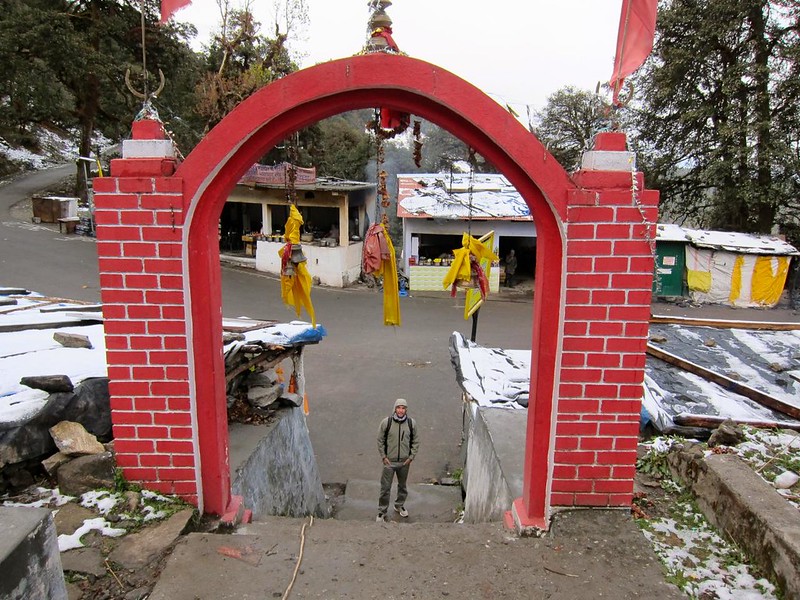 We started down an ancient cobblestone pathway, lined by green trees bursting with pink rhododendrons. The air around us was silent, and it appeared that we were the first and only people climbing Tungnath that day. A light dusting of snow had fallen overnight, and it made the rhododendrons along path all the more colorful. 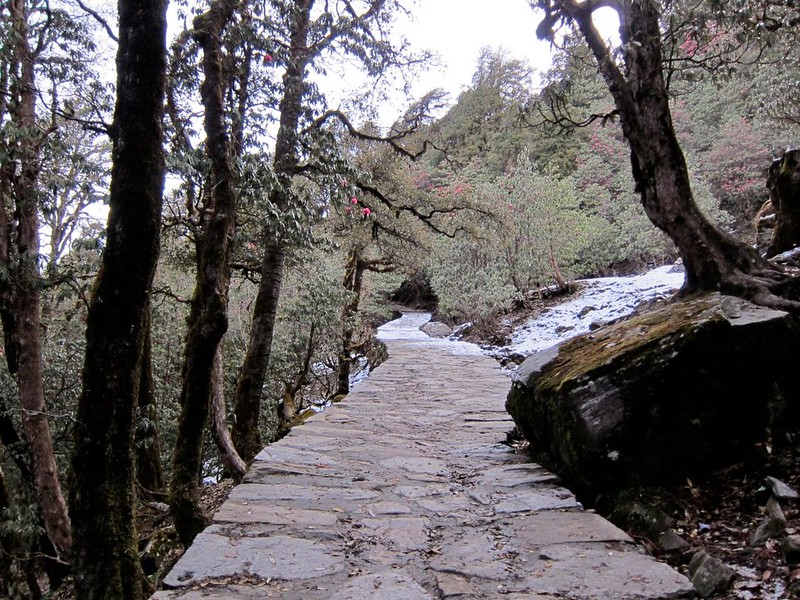 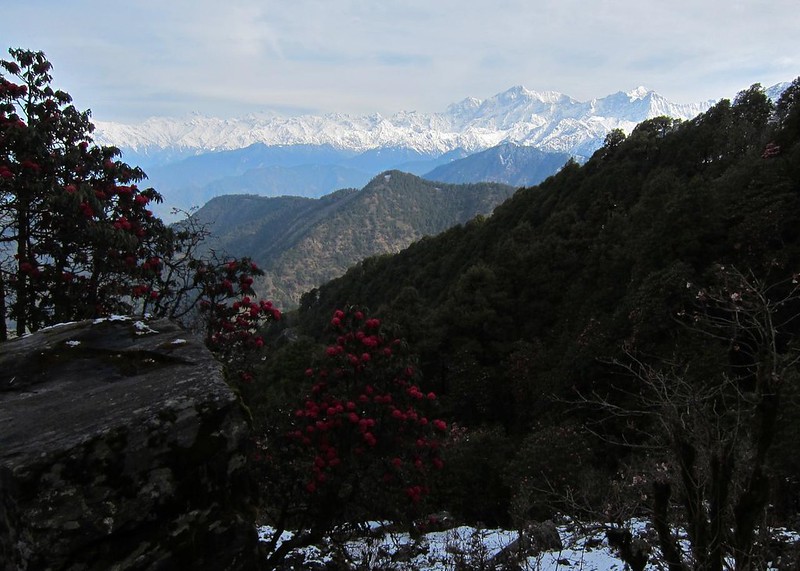 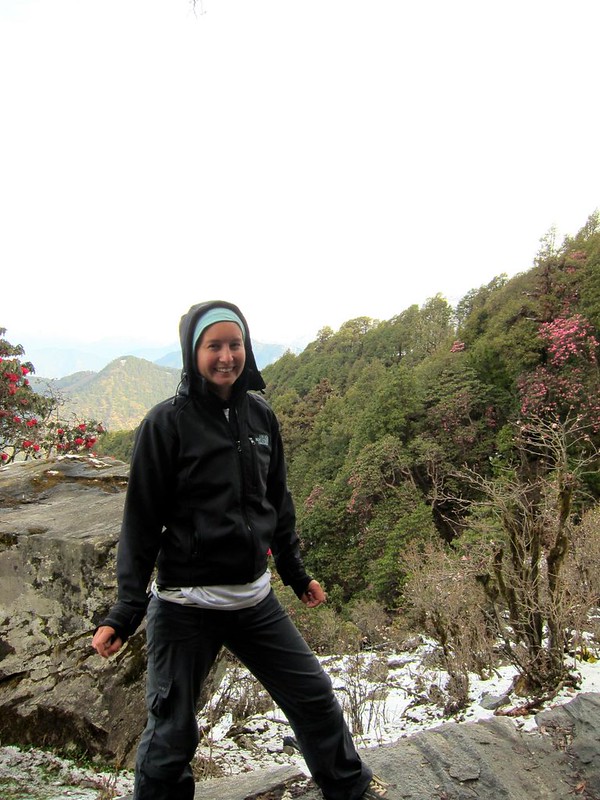 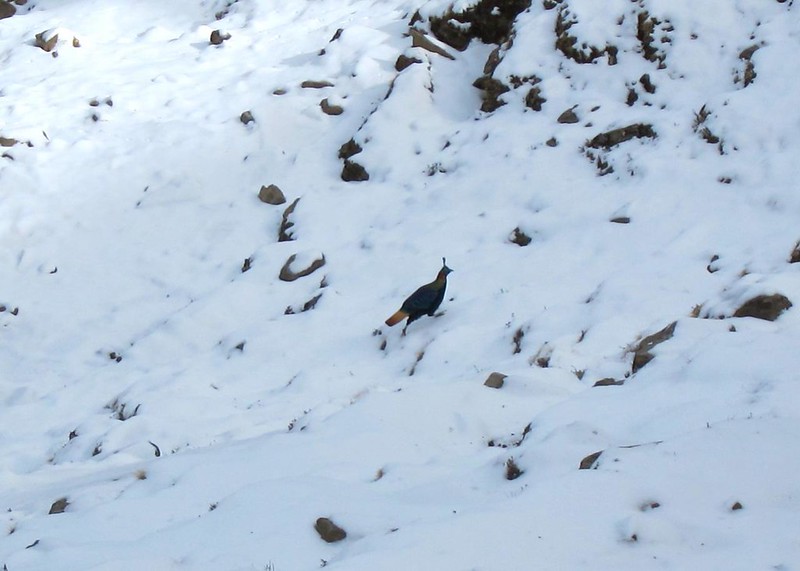 As we climbed up and past the tree line, the terrain changed from lush greenery to harsh and frozen terrain, where snow had accumulated from the storm the night before…. 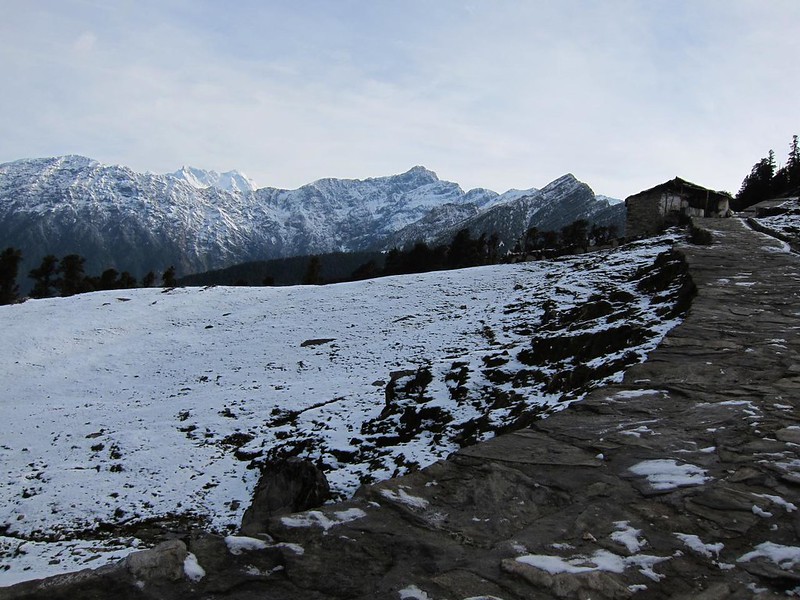 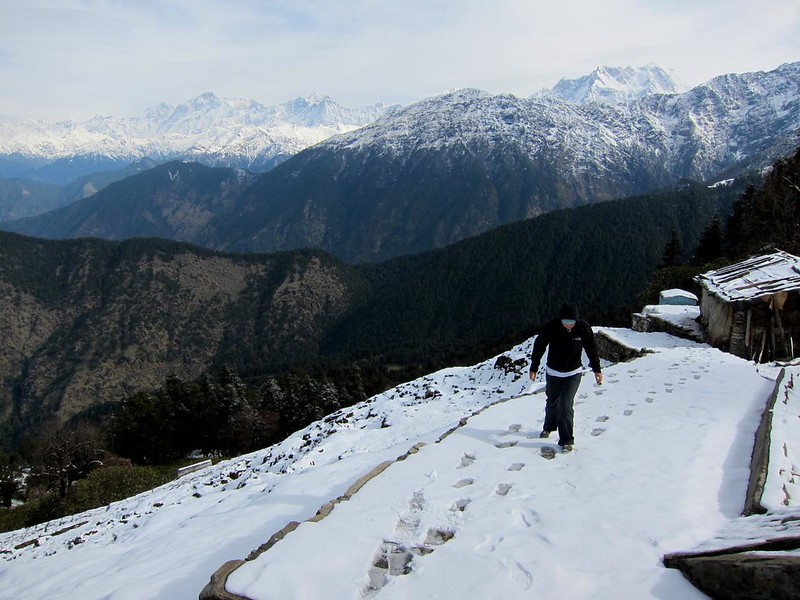 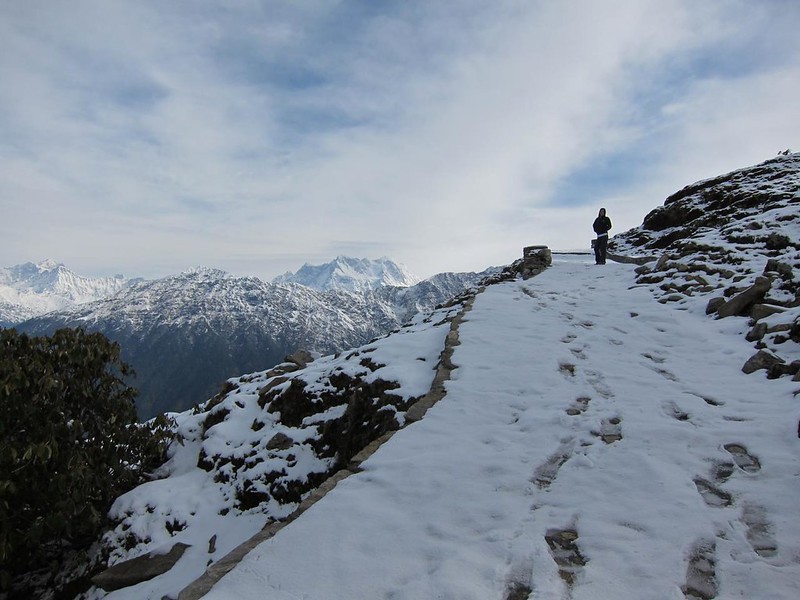 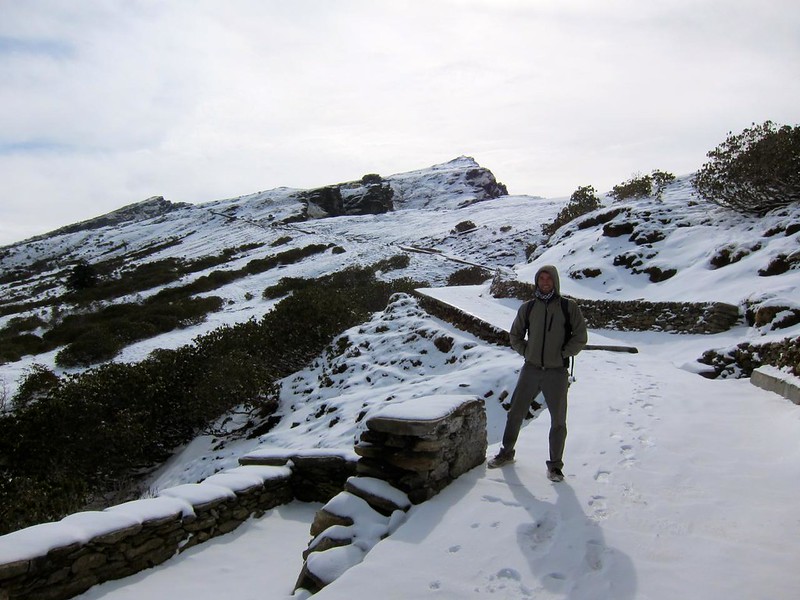 ..and the incredible Himalayans in the distance finally came into view as we neared the top. 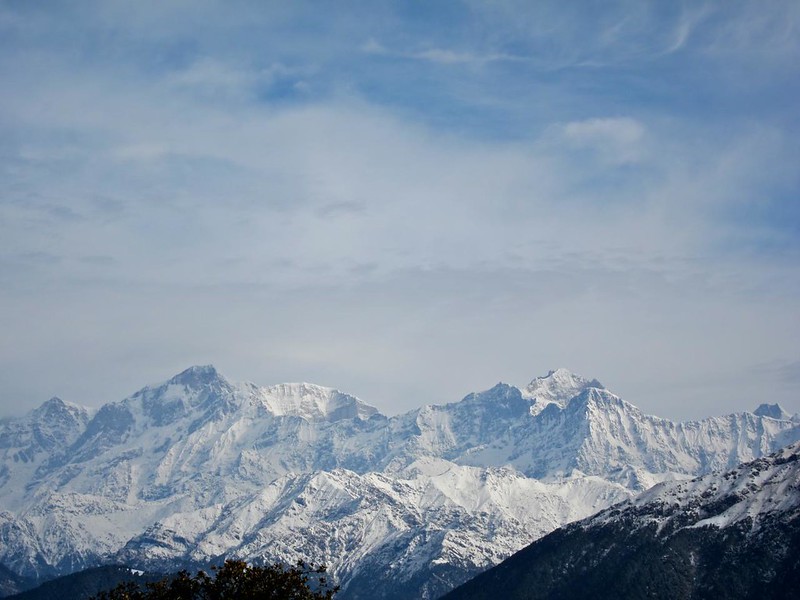 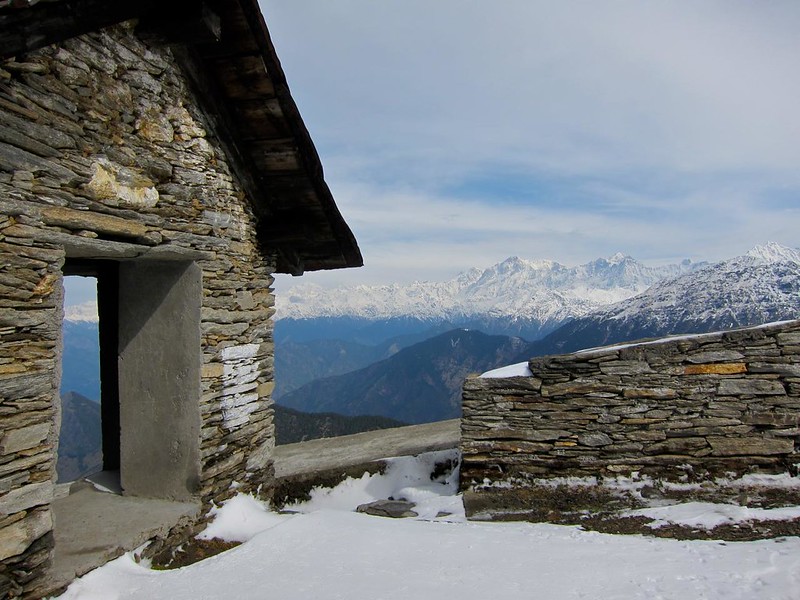 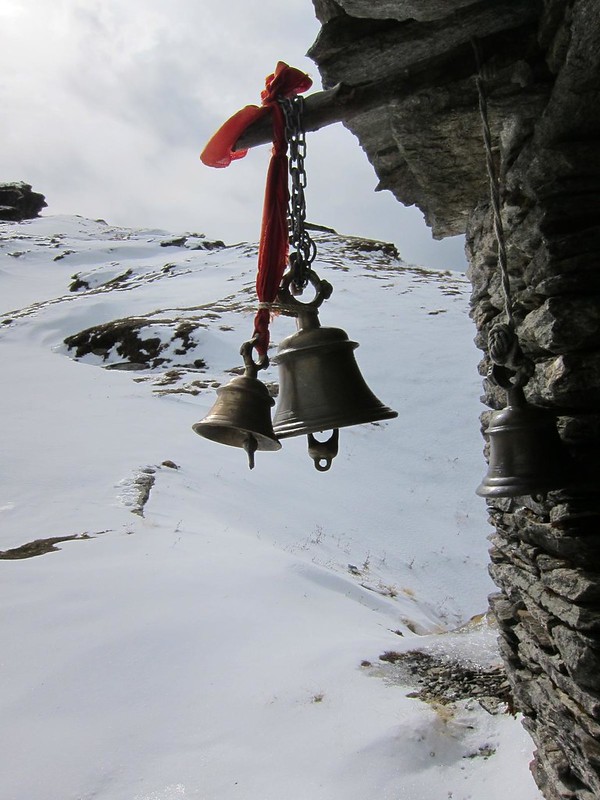 As we rounded the final corner of the trail, after 4 hours of hiking, we reached a series of buildings– we had expected there to be a temple at the top, but we were not expecting to see what appeared to be an entire village!  Steph rung the giant bell at the entrance to announce our presence. As we looked around, however, we realized we were the only ones there.

At over 12,000 feet high, the temple at the top of Tungnath (meaning Lord of the peaks) is one of the highest in the world. It is the highest Hindu shrine dedicated to the god Shiva, and we were told by several locals that the temple is over 5,000 years old… the Wikipedia entry has it listed at at 1,000 years old, but who knows… 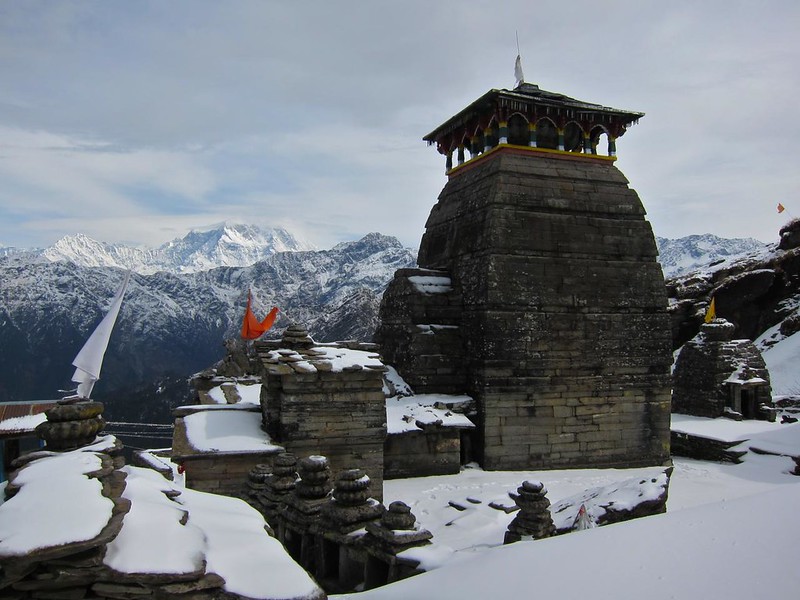 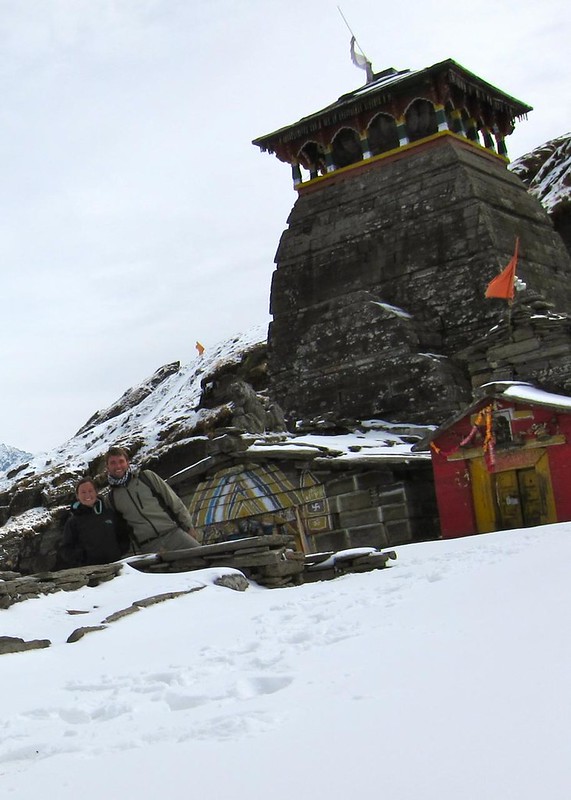 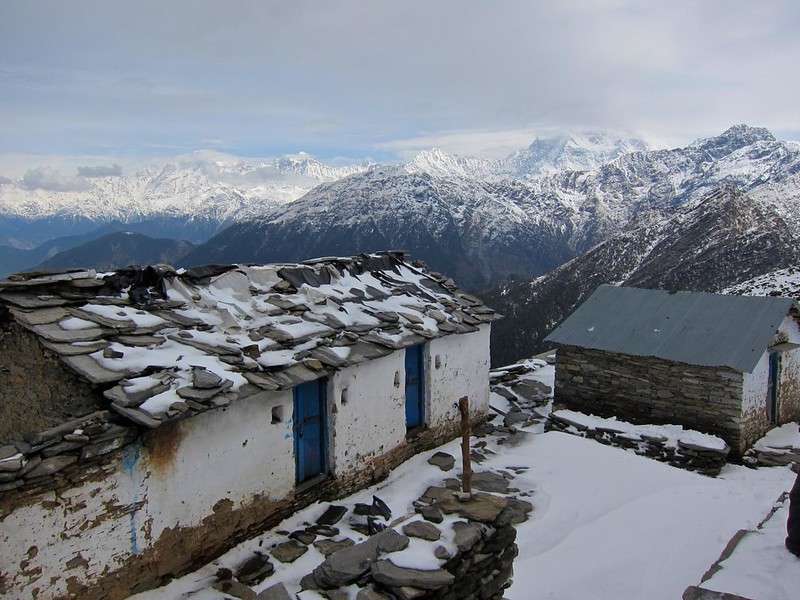 Although the entrance into the temple would be closed for another month (it is only open during summer months), we wandered through the snow-covered grounds of the temple complex, where we also found a small monastery, what appeared to be a school, and a smattering of other small buildings. Across the valley from Tungnath, it seemed we could see all of the Indian Himalayas.

We were shocked that only 1,000 feet farther down the mountain we had been enjoying balmy T-shirt weather, while now we were trudging through fresh knee-deep snow! Although we would have liked to have spent more time gazing at the views, Steph’s tennis shoes were thoroughly soaked, and and her toes were going numb by the time we decide to turn around and head down.

Just as we were began our descent, we were stopped in our tracks… 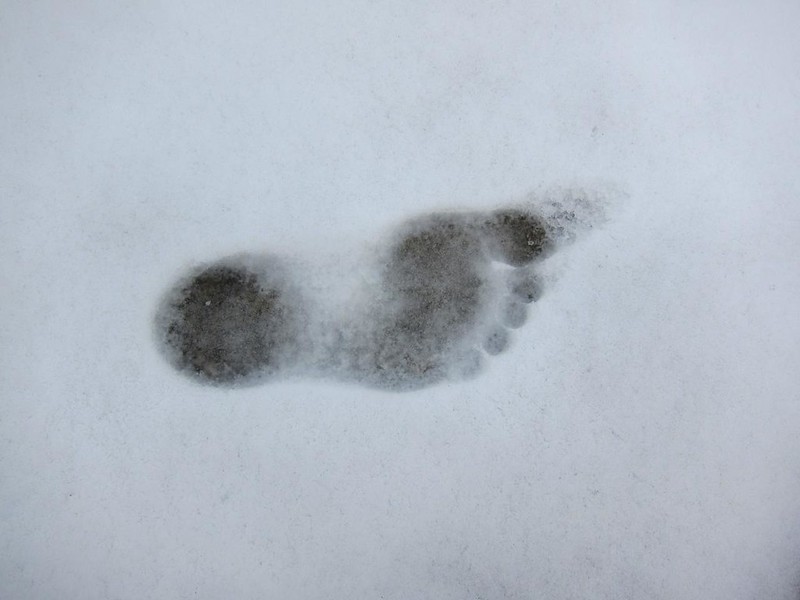 Could that be? Barefoot prints in the snow? (Just to be clear: it was utterly freezing at the top of Tungnath… 12,000 feet doesn’t afford much in the way of heat!)  But sure enough, just as soon as Steph slipped on an ice slick onto her butt, the Barefoot Baba (yogi, religious person) himself came upon us. “Namaste!” we greeted each other. (If he spoke English, he probably would have told us that you get better traction on these ice slicks when you’re barefoot.) Later, we were told that he lives at the top of Tungnath, caring for the temple alone during the winter, and that he lives extremely minimally, and indeed, does not wear any shoes. 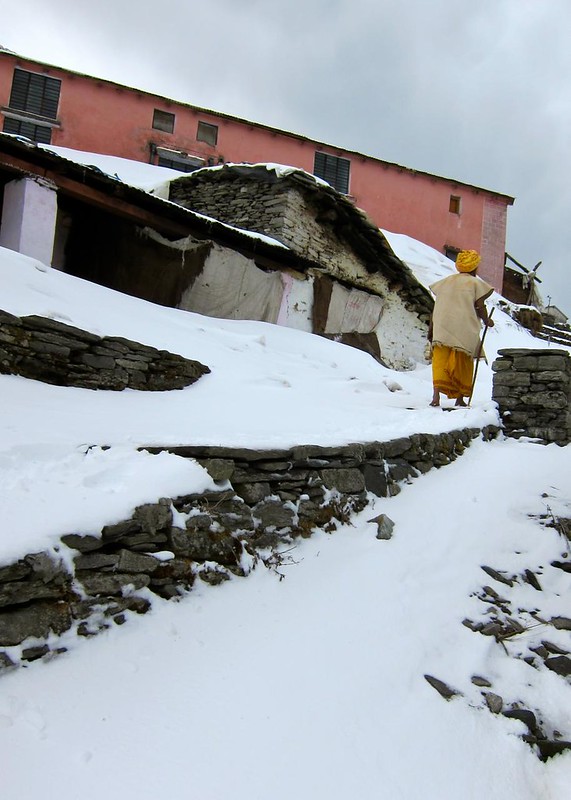 Some scenes from the way back down… 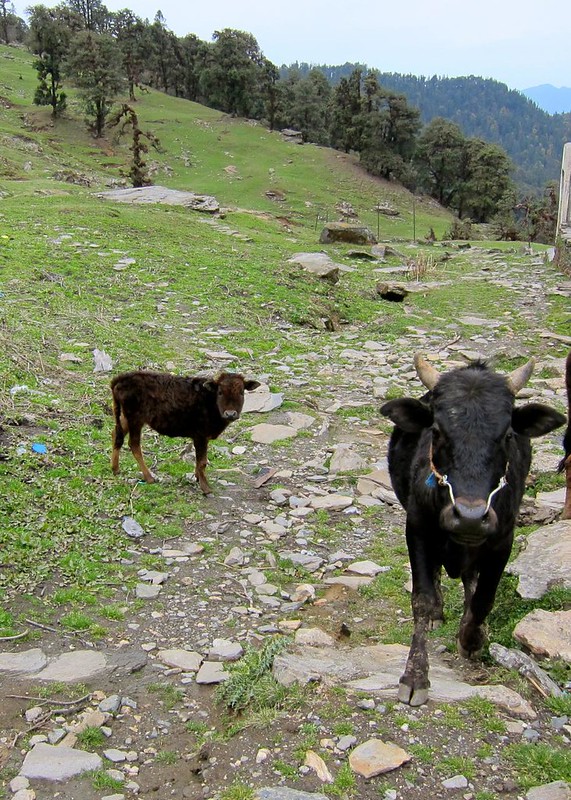 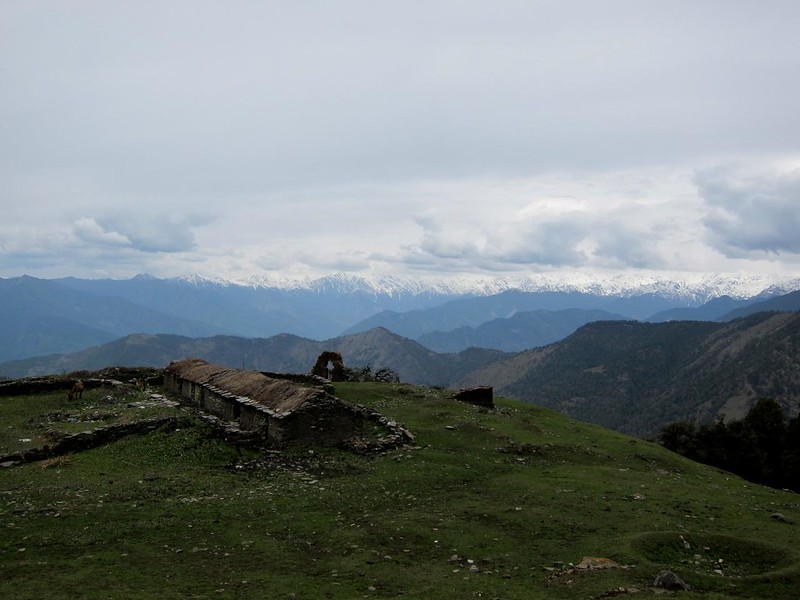 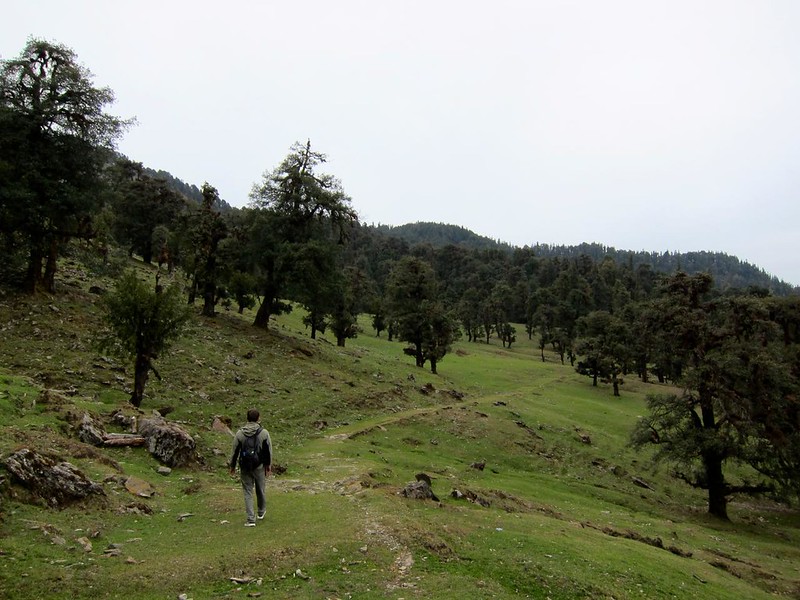 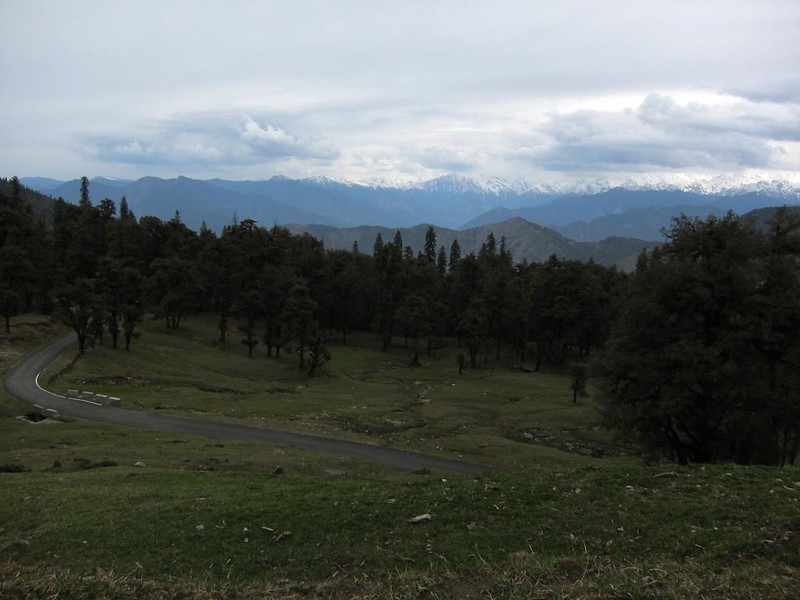 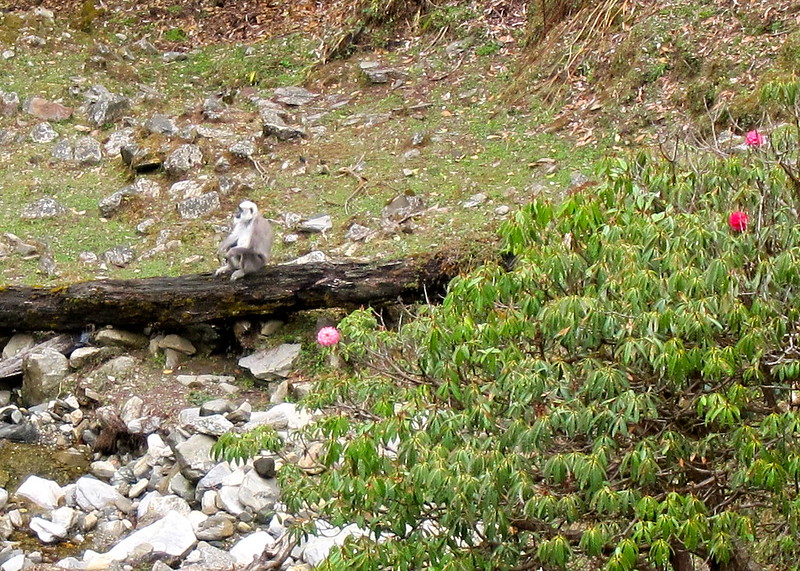 After our trek, we packed up our belongings and enjoyed our last night in Chopta, assuming our usual positions by the outdoor dung fire. We were really getting tired of the cold and had devised every method to try to overcome it: bringing hot coals into our room at night; wearing 6 shirts each at all times (seriously); not bathing. Steph really took it to the next level on this particular night and ended up melting her shoes in the fire while attempting to thaw out her frozen feet.

The following morning, we loaded into an old safari “Maxx” jeep and took off for our next stop, Gopeshwar (…a completely random choice on the map that would eventually take us back to Delhi in time for the following week). The road between Chopta and Gopeshwar is not really a road, it turns out– it’s more like an off-road dirt track, full of downed-trees and pot-holes. Indeed, our hotel’s caretakers had to call several taxi drivers before one would even agree to take us. Needless to say, it was more than a little bumpy… 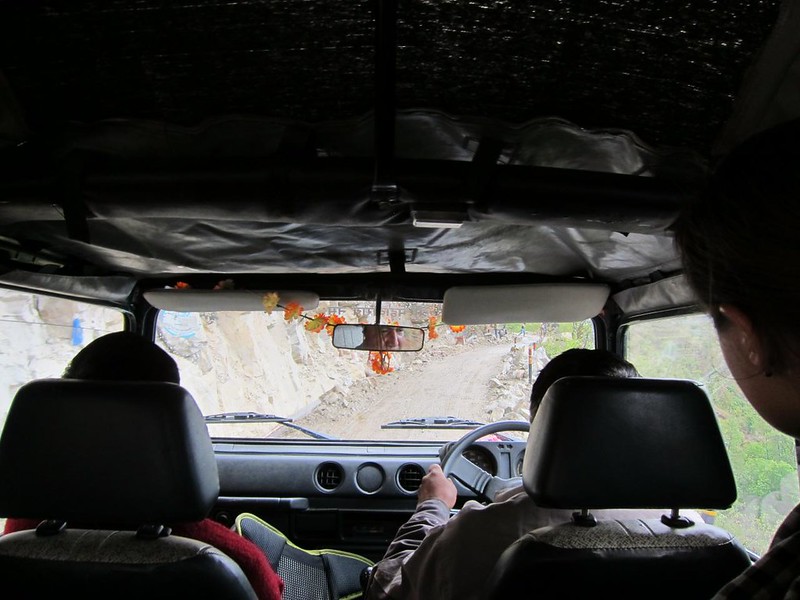 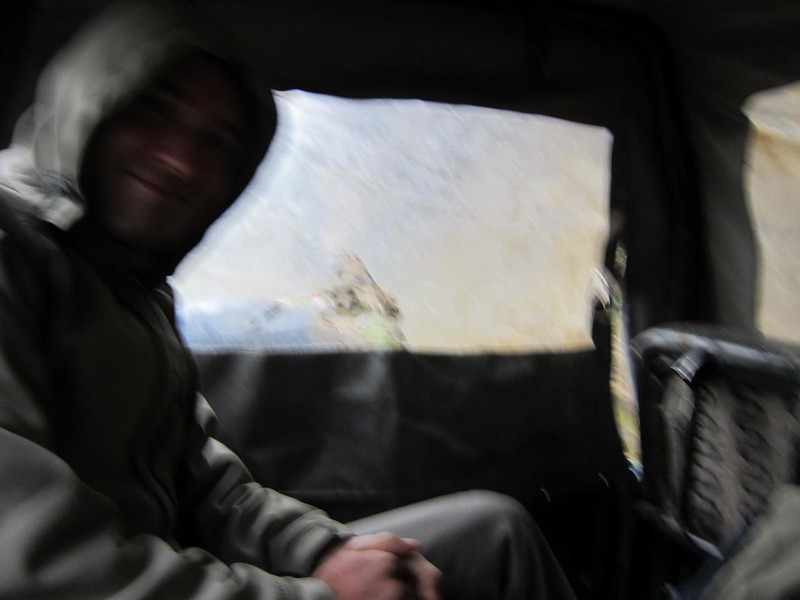 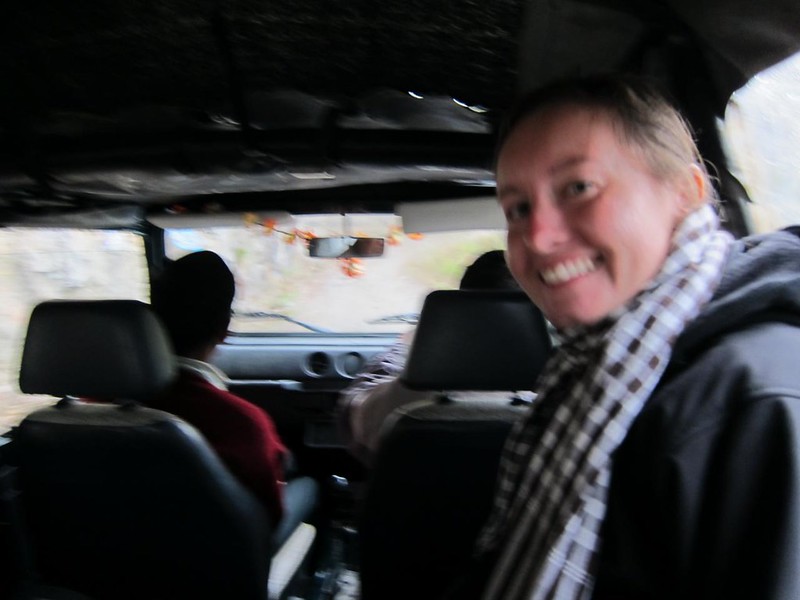 Chopta was an experience. Despite cold temperatures, painful sickness, and less than comfortable living conditions, the quiet beauty of Chopta and friendliness of its people combined to make it one of our favorite stops of all…