We decided to finish off our time in Jaisalmer in proper desert form: an overnight camel trek, deep into the sand dunes of the Thar desert.

Our trek began from the hotel, from which we were picked up in our “safari jeep”: a white ’92 Corolla with no hubcaps (or seatbelts). More terrifying was our 15-year-old driver, who spent half the time looking back at us while speeding forward into the desert, rather than looking at the road…

On the way, we stopped off at the Bada Bagh Cenotaphs, a major burial site of past maharajas.

Next stop: the middle of the desert, where our driver planned to find our camel and guide. Along the way, we saw several camels roaming wild, and later learned that they likely had an owner and were used for work or trekking, but are set free during the slow season, only to be found later on when business picks up again. 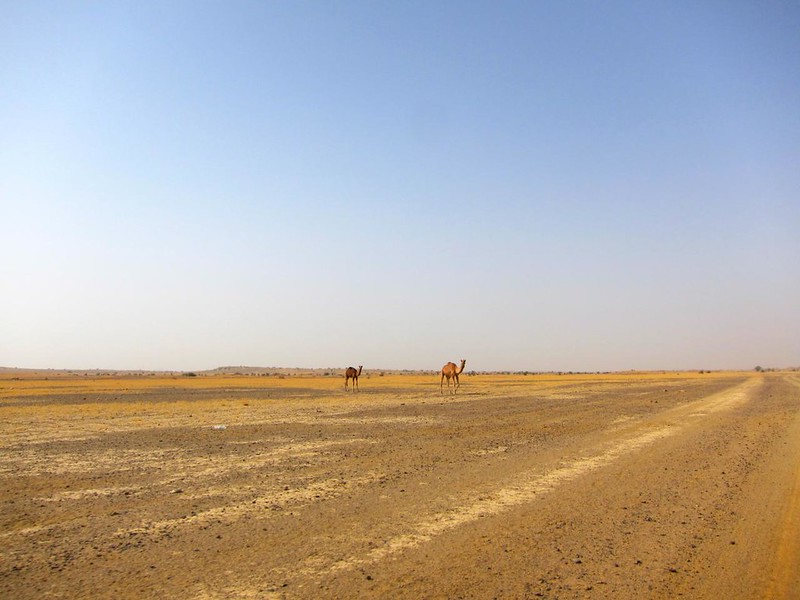 Our driver seemed to have a hard time finding our camels, and after stopping several times to ask seemingly random folks along the way – donkey herders and the like – we eventually parked, and he told us to wait by the car while he set off for a walk, chatting on his phone along the way.

…and there we waited, for a good while.

Eventually, we took off in a new direction, catapulted our Corolla over some dunes, and there we found a few camels and a man – our guide – walking alongside. Without any introduction, we were assigned camels for the day: Steph was grudgingly given the rugged-looking large camel, which we later learned was named Rambo. Mine, a gentler-looking camel with a cuddly-sounding name. The camels bowed down to let us climb up atop the pile-of-blankets saddle on their back, and we were off! 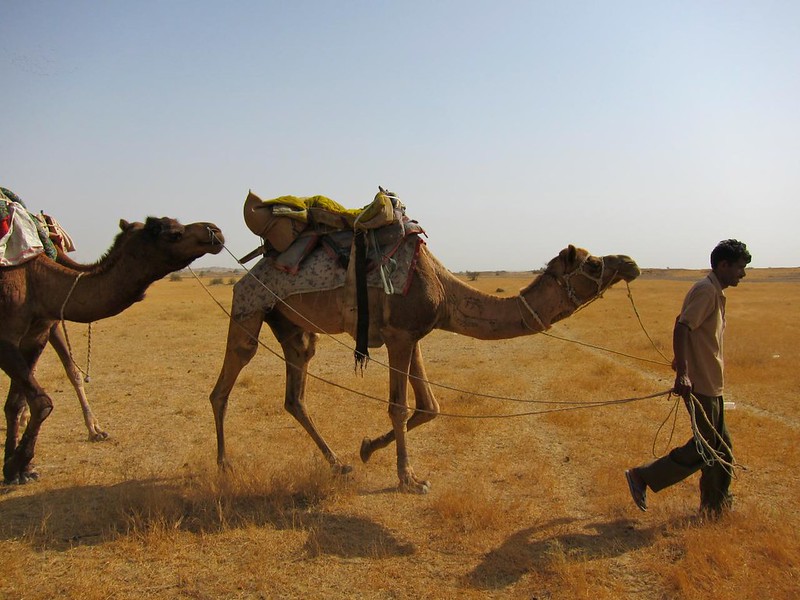 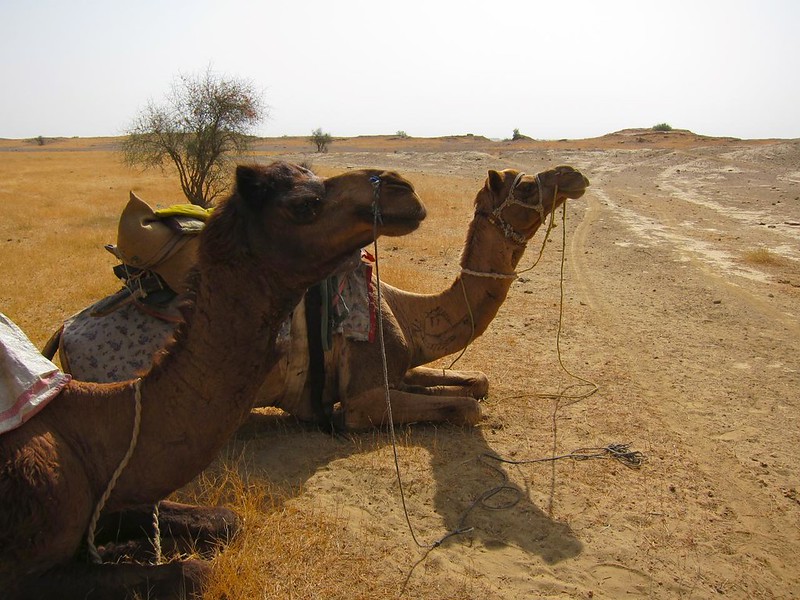 We rode through dry rocky brush landscape for most of the morning. Our driver walked alongside the third camel while we made small talk about our families, camels (“aren’t these supposed to spit a lot?”), and Rajasthani rural life. The sparse landscape seemed to go on for miles without any sign of civilization (or the sand dunes we’d been expecting) – just emptiness… completely surreal.

The dry heat was oppressive, and we constantly sipped from our water jugs while bouncing along. In the prior few days, I’d come down with a fever and nausea (likely caused by something I’d eaten that could have been more hygienically prepared). While riding the camel, I was still battling the nausea, which made the heat even harder to deal with.

A few hours in, we stopped to make lunch under a tree. Our guide tied up the camels and unpacked a cooking set from bags on the camels’ backs. 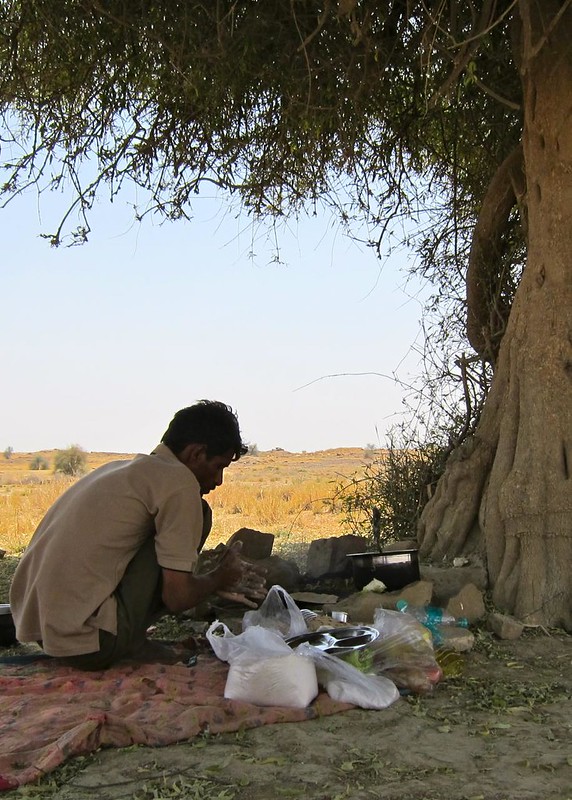 He made us a great lunch: chai tea, spicy cabbage curry, loads of chapati (flat tortilla-like bread), and some crispy puffs that expanded when fried in oil (sortof like cheese doodles).

Just as he finished cooking, Rambo spotted some female camels in the distance and wrestled his ropes loose so he could go for a flirt. Our guide had to go retrieve him, which made for good timing as my nausea was coming on pretty fierce and I had to bury/hide some of the food he’d made for me (rather than making him think we didn’t like it – it was great!).

Our guide, chasing Rambo. Two female camels, to the left:

Speaking of too much food… there was no way we were going to be able to eat the loads of chapati he’d cooked for us. Fortunately, Rambo was a big fan.

After lunch, we loaded up the bags on the camels again (which my camel did not like at all), and with shirts tied over our heads, we set off again for the dunes. 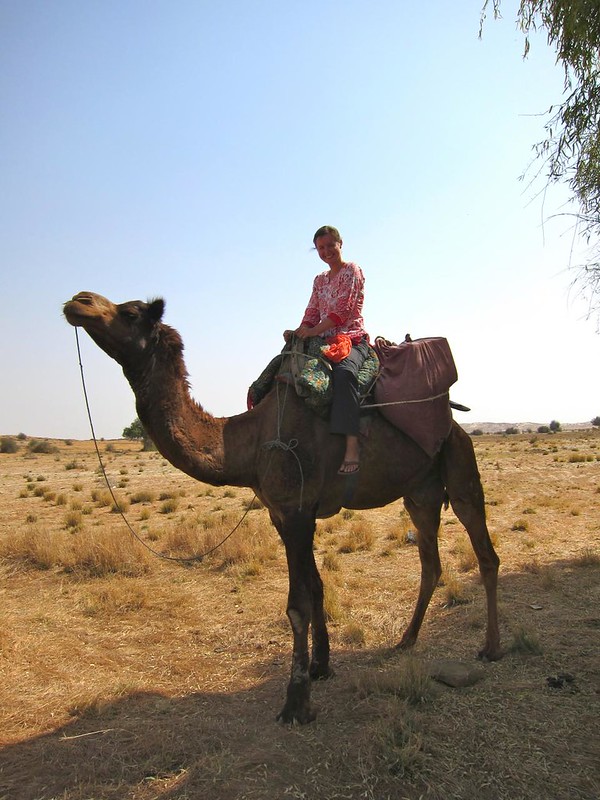 The ride from here went on for hours, with the terrain slowly becoming more sandy. 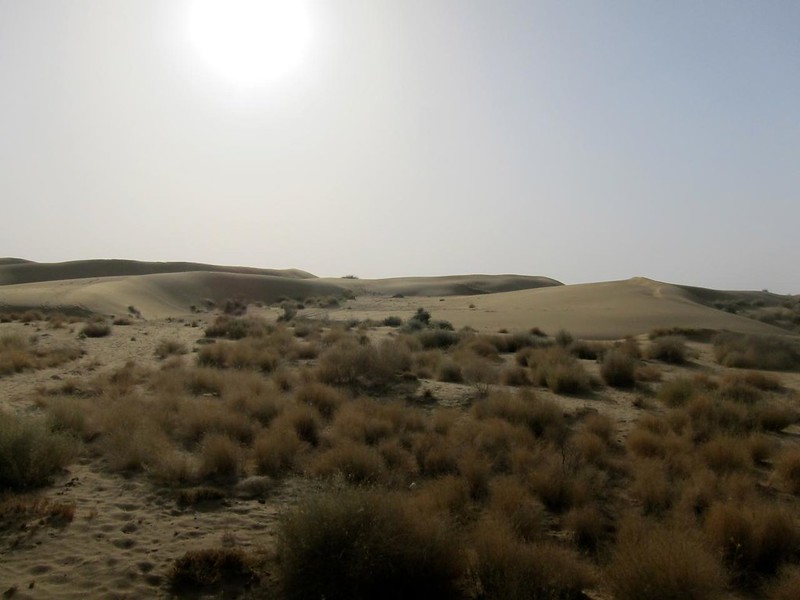 A couple of guys who were on a sunset camel trek joined up with us. They were from the US and living in Mumbai, both there on Fulbright scholarships studying gay social acceptance in India (amazingly, homosexuality itself was illegal in India until 2009!).

A couple of hours more, we finally made it to the sand dunes, where we planned to spend the night. We unpacked and walked around while our guide made more chai and puffs, followed by dinner which I again was unable to eat (feeling worse as the day progressed).

Being in the dunes was just like we’d imagined from seeing it in the movies. 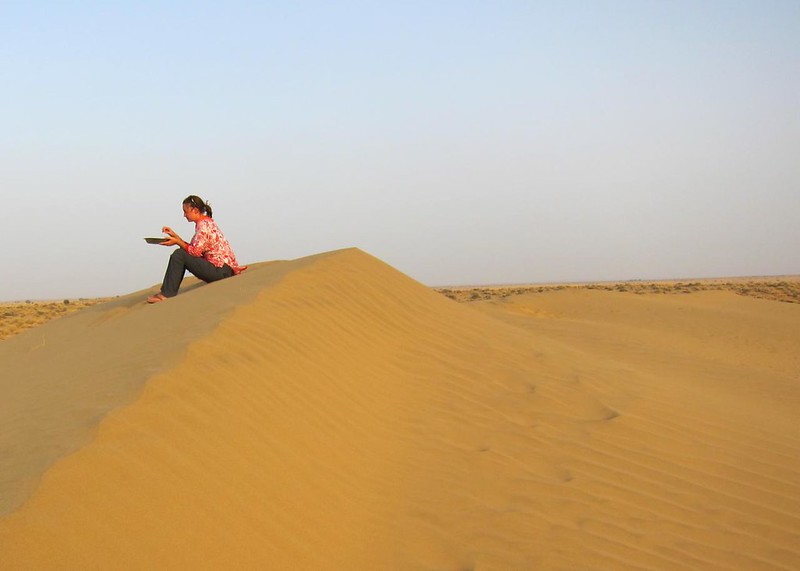 While our guide was cooking dinner, a nomad wandered over and seemed to be upset about something, or perhaps he wanted some of the dinner (I would have gladly given him mine!). After a little while, he left again, walking off into the sunset.

One unexpected annoyance came around dusk. Black beetles rose up from beneath the sand and seemed to magnetize toward people! We spent the entire evening beating them back by kicking sand and rolling them down the dunes, after which they’d upright themselves and walk right back at us. Our guide told us the beetles would sink back into the sand when it got colder in the night…

The other guys on the sunset tour left for the night. We picked a spot in the middle of the dunes to lay out our bedding and settle in. The beetles did seem to thin out as night set in, but never entirely, and many were found nestled into our blankets throughout the night. 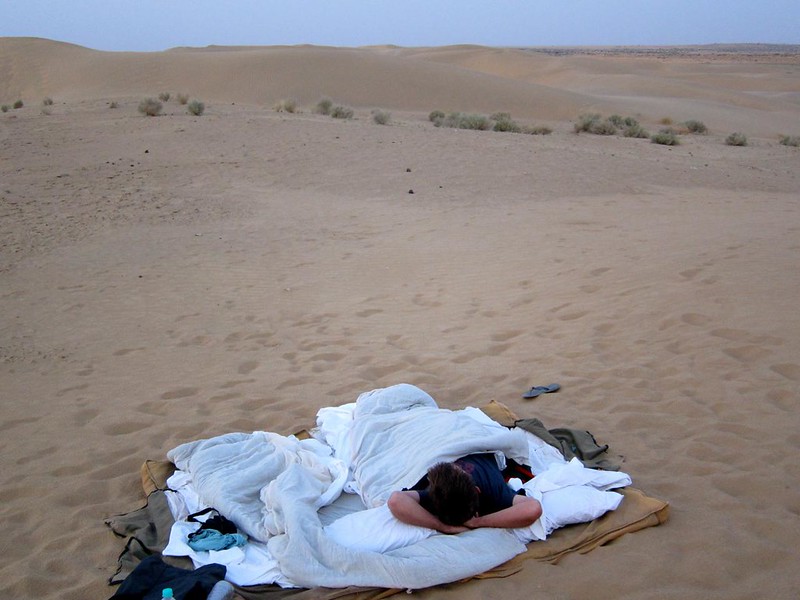 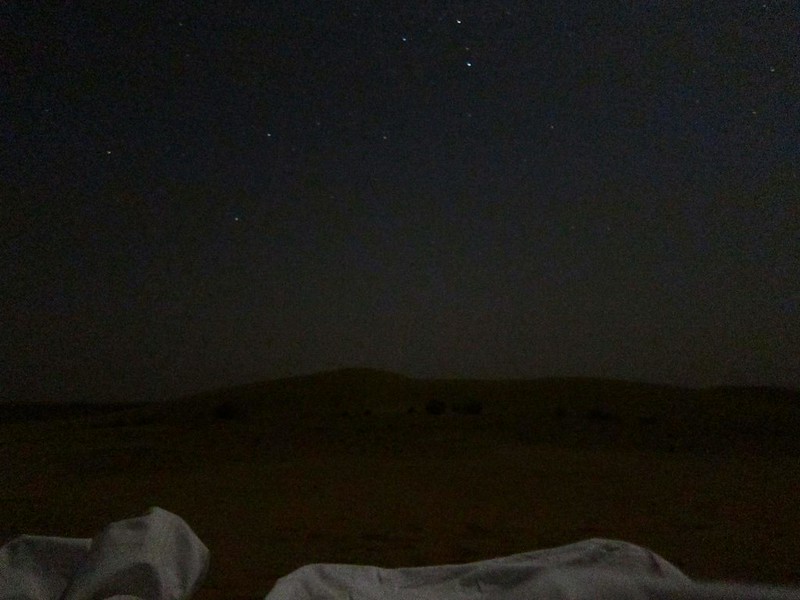 The night was completely black, quiet, and peaceful. Before bed, we drew shapes with the camera using the light of the full moon – ah, the romance! Steph finally made a star. 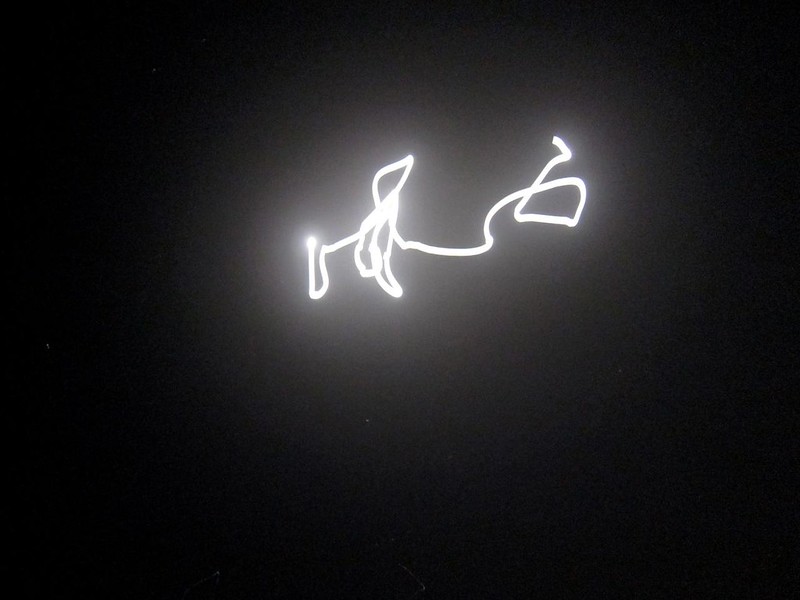 In the morning, we woke up to the sunrise over the dunes, and spent some time exploring. It’s hard to tell in the pictures that some of the dunes were at least 30 feet tall! 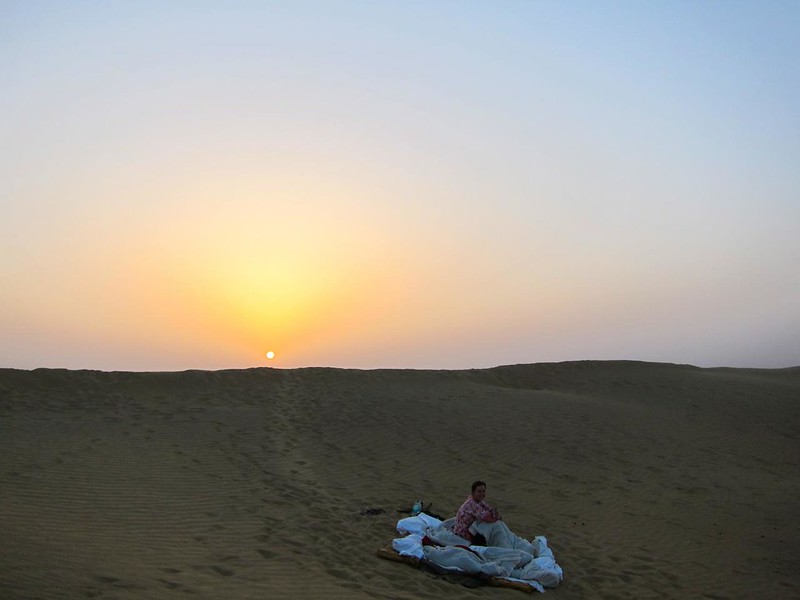 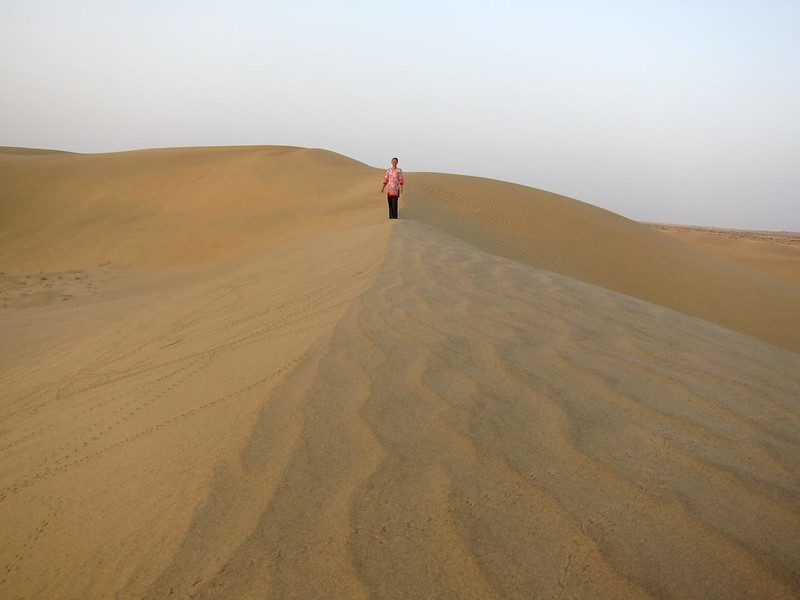 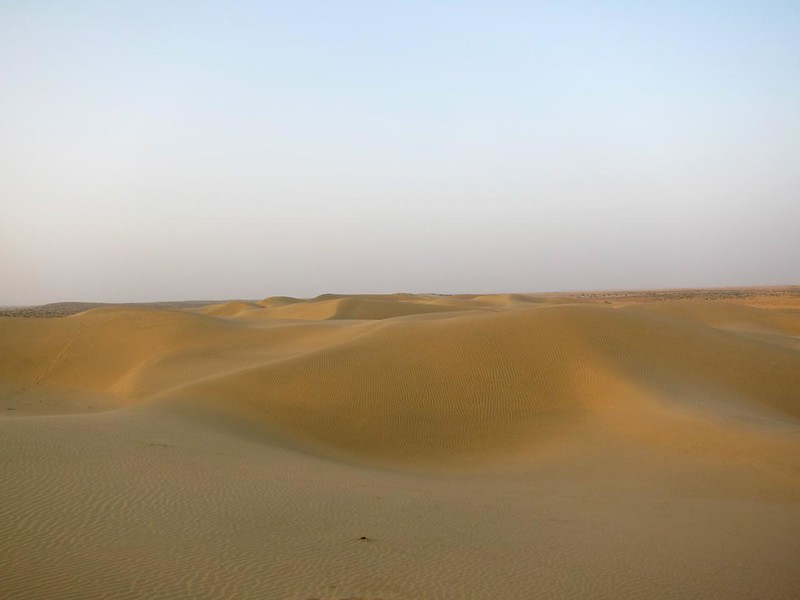 Beetle tracks covered the surface of the sand.

After a lazy breakfast, we were back in the “saddle”, headed back to the city. This made for another long, hot ride, but the sights along the way made it all worthwhile. 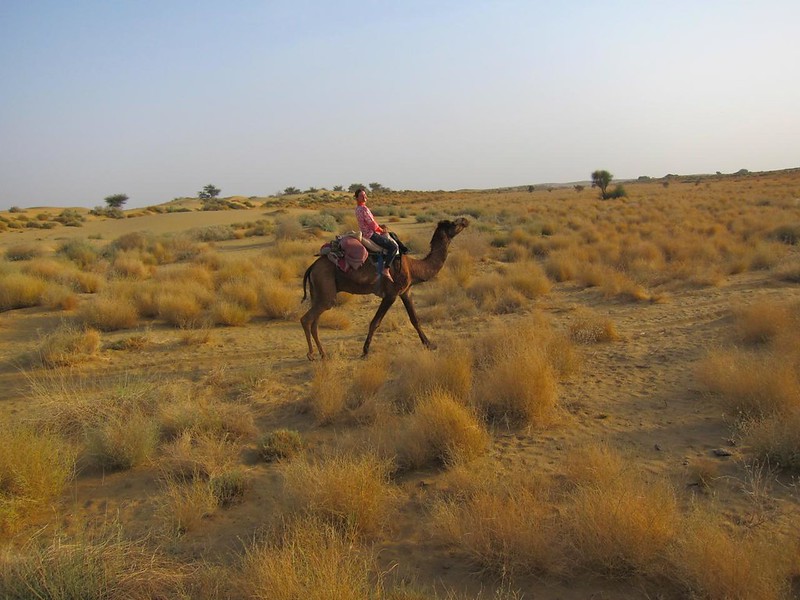 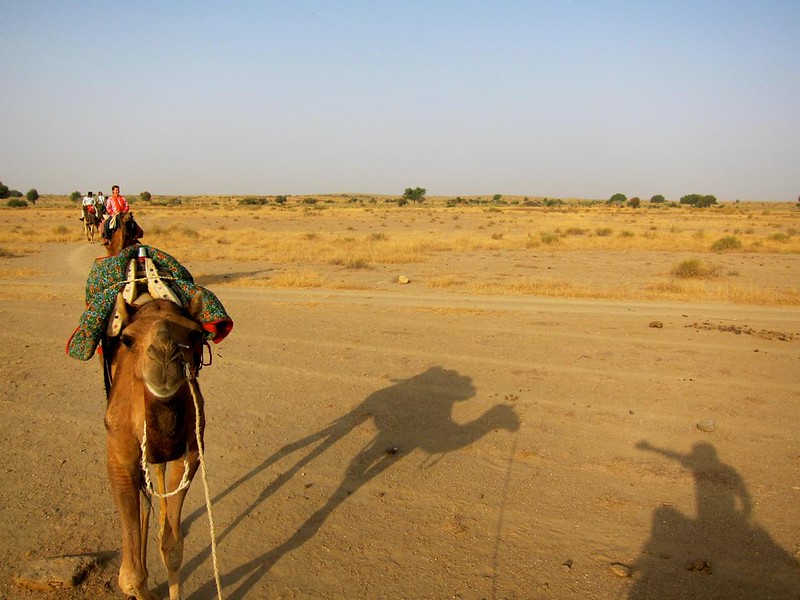 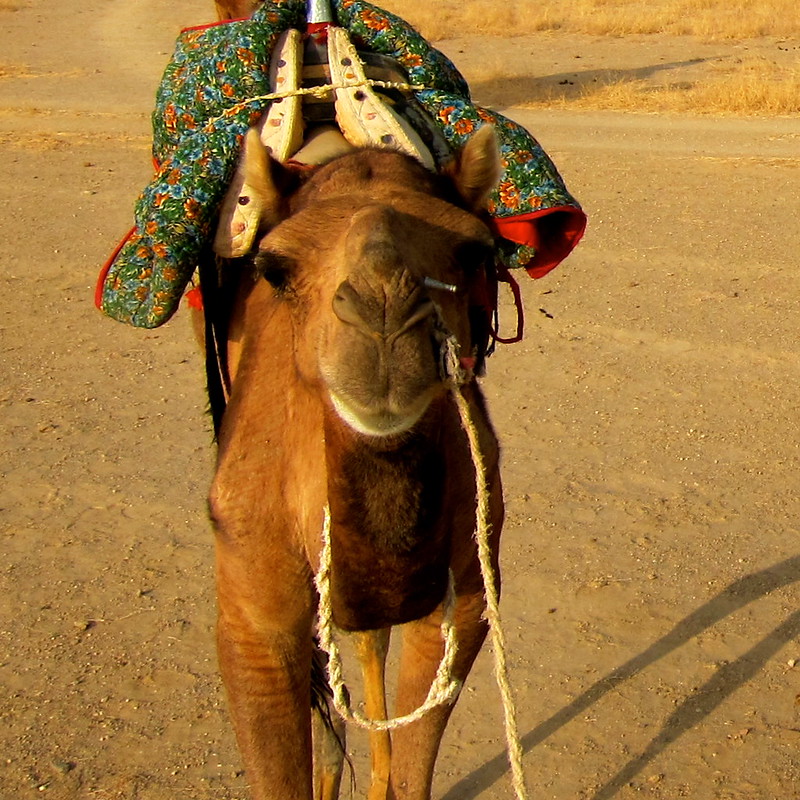 One last pic before de-cameling, the shutter of the camera half-jammed with sand (fortunately it worked itself out later). 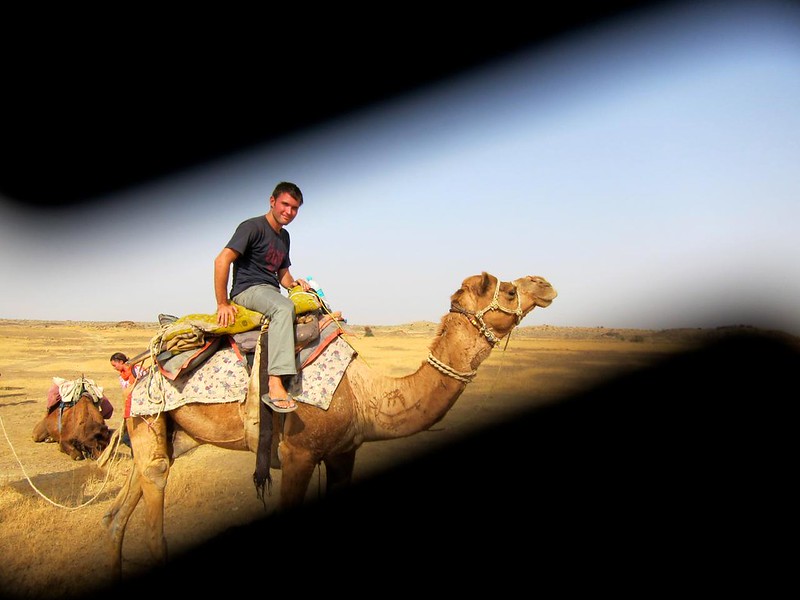 We met up with our jeep – a real one this time – and visited one more stop on the way home: a village in the desert, where some kids greeted us and wanted to take pictures. They also asked for “school pens”, which we’ve found to be very common in India. As hard as it is, we try not to reinforce the idea that tourists are here for hand-outs, so we didn’t give them pens, but we did joke around with them for a while, which seemed to be just as pleasing.

The conditions they lived in were dire, and sad to see, though all-too-common around India. It was hard to imagine how kids growing up in this village will have much of a chance to succeed. Just another reminder that although much of India is relatively well-off, the lower classes are completely cut off from that prosperity. 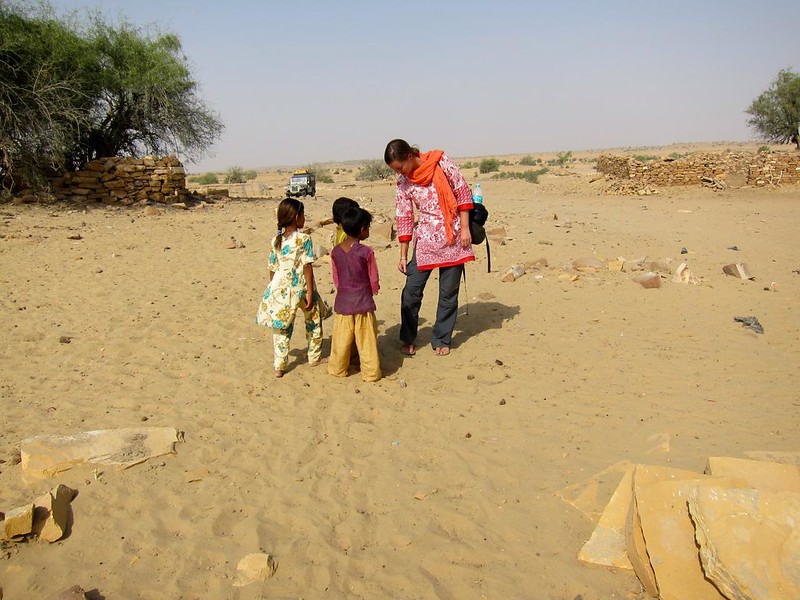 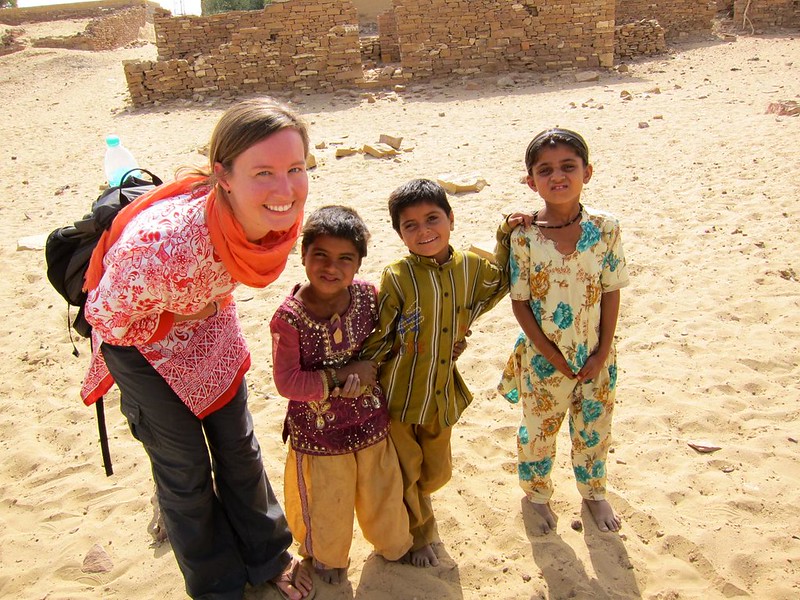 And that concluded our desert trek. Back to Jaisalmer and time to move on to our next destination…