Fresh off the slow boat from Luang Prabang, and well-rested after a night in the sleepy Lao border town of Huay Xai, we crawled into a tiny wooden longtail boat, waved goodbye to Laos, and made the 30-second trip across the Mekong River to the banks of Thailand, where we took off to the northern city of Chiang Mai. Chiang Mai was one of the places we’d really hoped to visit during our first time in the country months ago, but the flooding throughout Thailand in October made traveling north virtually impossible. It was nice to finally make it, but after having been through Laos, a number of the activities we’d originally wanted to do in Chiang Mai (mountain trekking, elephants…) were things we’d recently done. We decided to skip the excursions and get to know the city itself for a few days.

…and I’m not sure we really succeeded in that.

But there were some notable highlights.

First though, a trip to the camera store, as our beloved Canon S90 (I can’t recommend this camera enough) was unfortunately stolen in Luang Prabang a few days earlier. Here’s Steph happily buying us a new one (for a lot more than it cost the first time, or than it costs in the U.S.)!

To cheer her up after that unnecessarily expensive replacement, I bought Steph an ice cream at Häagen Dazs. With what must be the most expensive ice cream in Asia, $5 dollars gets you a half a scoop. Here’s Steph excited about that too.

Things got better after that…

First, a food milestone for the trip for me: my first bowl of Khao Soy. Khao Soy is my favorite Thai dish, but since it’s a northern dish, we had yet to find it in Thailand at all (we used to get it at Brown Sugar in Boston a lot!). For the uninitiated, Khao Soy is a thin, salty, spicy yellow curry poured over crispy egg noodles and chicken. The noodles soften in the curry as you eat it. It’s simple and delicious, and this place did it well.

We also had a delicious mango with sticky rice dessert, which is a common dish throughout Thailand. 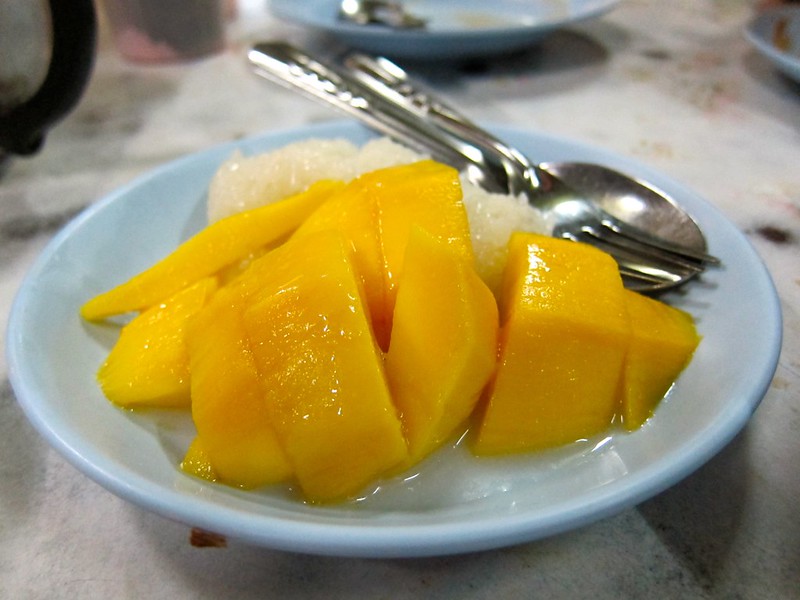 Following this theme, most of the interesting things we did in Chiang Mai revolved around food.

One afternoon, we stopped at a street-side food cart for a papaya salad. When Steph motioned to the vendor that she wanted to watch how the dish was made, she grabbed Steph’s hand, threw a mortar and pestle in it, and put her straight to work! The woman was very helpful and friendly, showing us the amount of each ingredient before she added it, even allowing us to taste any ingredient that we didn’t recognize before it got thrown into the pot, as Steph pounded away with the mortar. 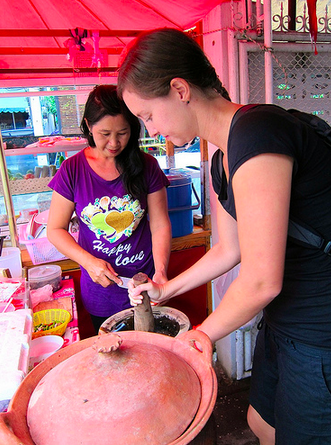 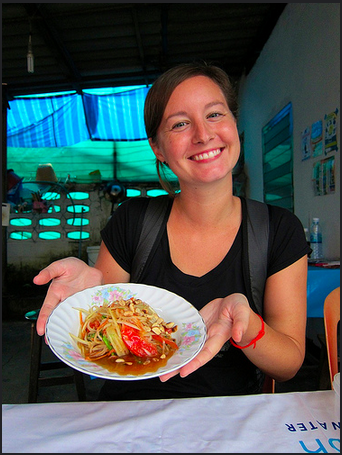 As we sat down at the small table next to her house to eat the finished product, we were joined by the woman’s husband, who began poking and pulling at the hair on my arms and laughing. He’d then point to his own mostly hairless arms, then return to pulling at my hair and chuckling to himself. He really got a kick out of it when I rolled up my pant leg for him!

After the delicious papaya salad, we wandered right across the street where we found a cafe called Coffee Bull, whose owners make the best Thai iced tea we’d ever had! 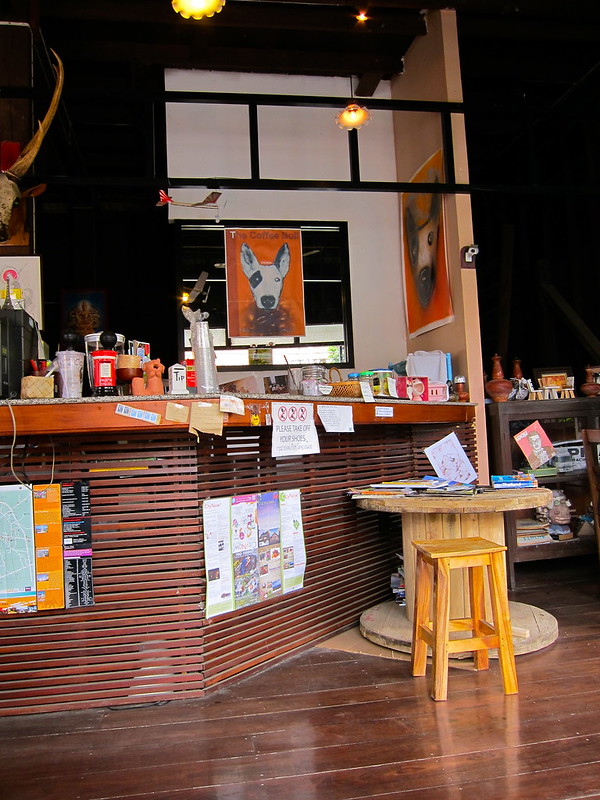 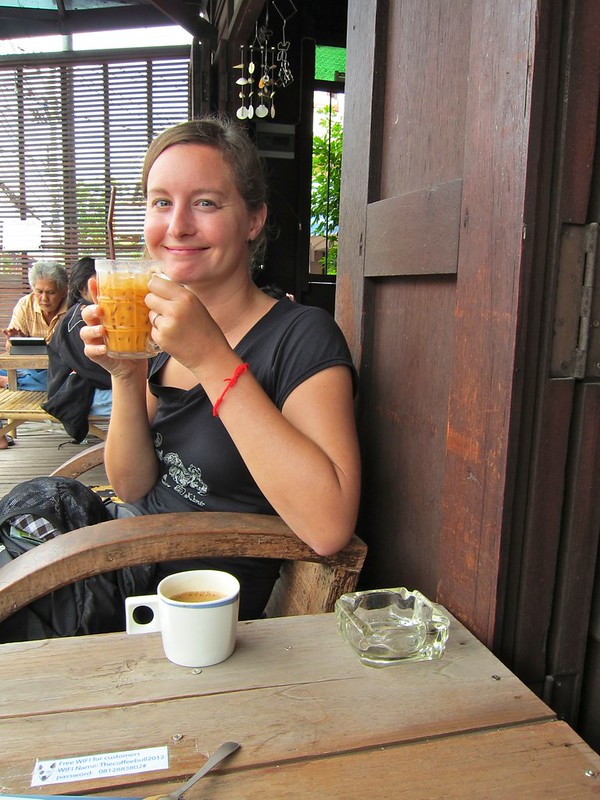 Steph was so awed by their tea that she once again asked if she could get a lesson on how to make it, and the owner was more than happy to oblige, taking Steph into the back room to show her how they brew the tea and how it gets incorporated into the final drink (the tea is brewed the day before, set in the refrigerator overnight, and then and then mixed with a blend of sweetened condensed milk, simple syrup, and ice). So simple, and yet we just know we’ll never be able to reproduce it at home.

We went back a couple more times, and the owners were were always so welcoming, giving us free drinks and inviting us to sit around and play guitar with them in their cafe. After a few days, Steph left a nice long note in their guestbook.

The markets in Chiang Mai were as great as we’d expected. While there, we spent entire afternoons just roaming around, sampling foods on the streets.

Street-side fried chicken that’d be more than acceptable anywhere in the Southern U.S.: 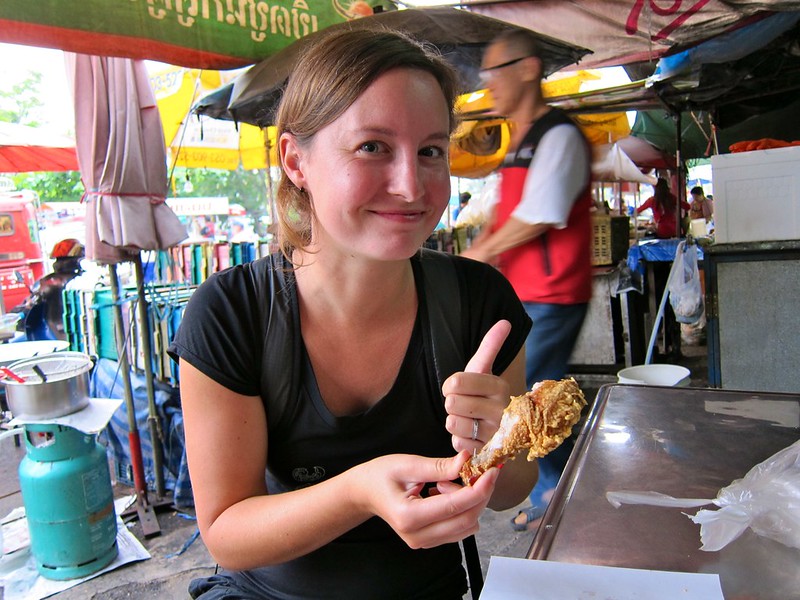 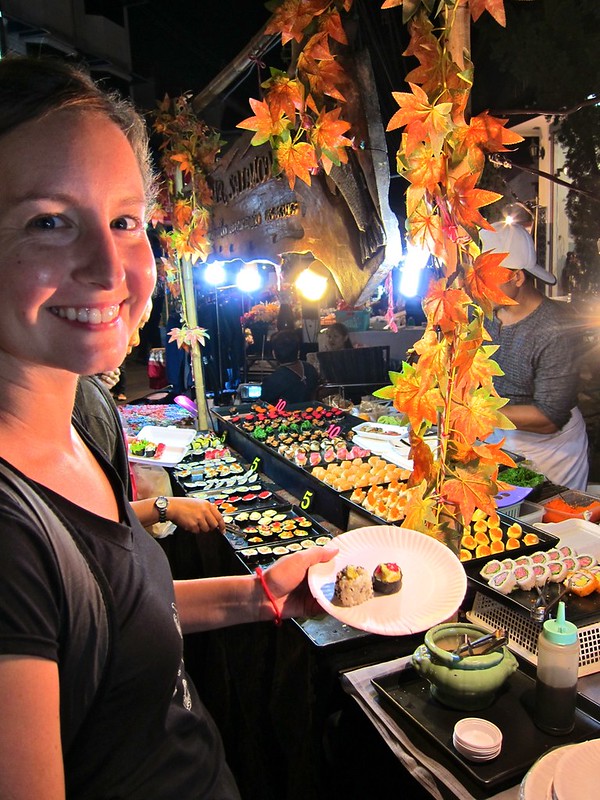 Our friends Adam and Steph (who we met in Boston, now living in Thailand) recommended we check out a restaurant called Huen Phen. It’s a really popular place with locals, and worth the long wait – really great traditional northern Thai food. We ordered their set tasting menu, which consisted of the following: 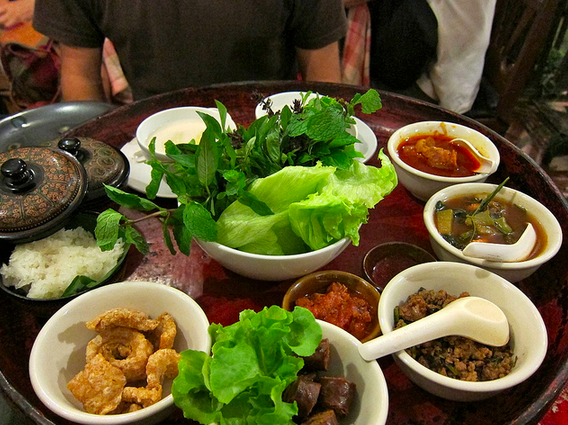 The next day, another foodie milestone for us: bugs! This lady was selling all sorts of fried creepy crawlies, from grasshoppers, to crickets, cockroaches, and worms. Her stand seemed to be pretty popular with the locals, so we decided to give it a shot. 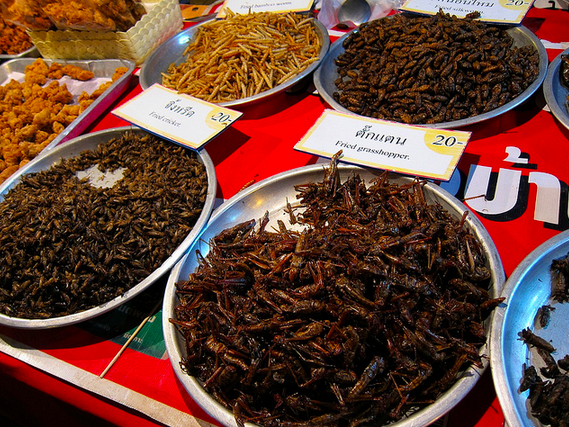 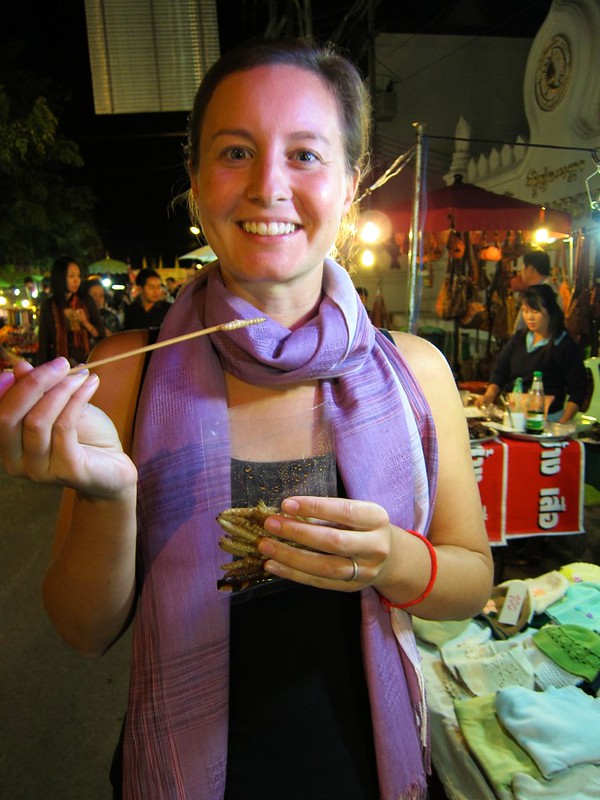 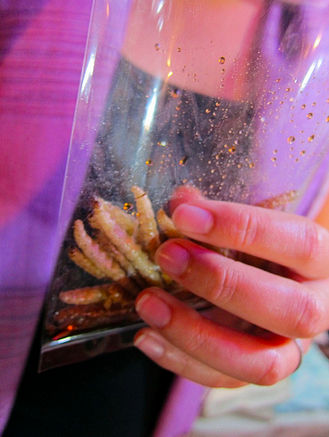 The verdict? Meh… they weren’t repulsive, but they weren’t particularly tasty either. A little crunchy at first, a little gooey if you chewed in just the right place, salty/mild flavor overall.

Moving on from the food…

Another highlight of Chiang Mai was its beautiful temples. 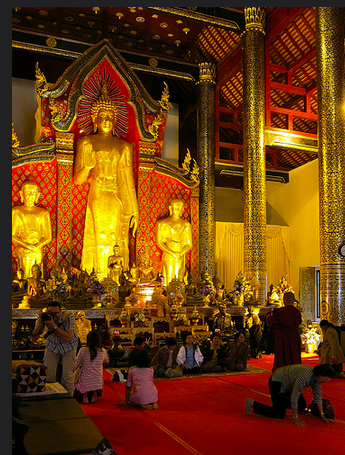 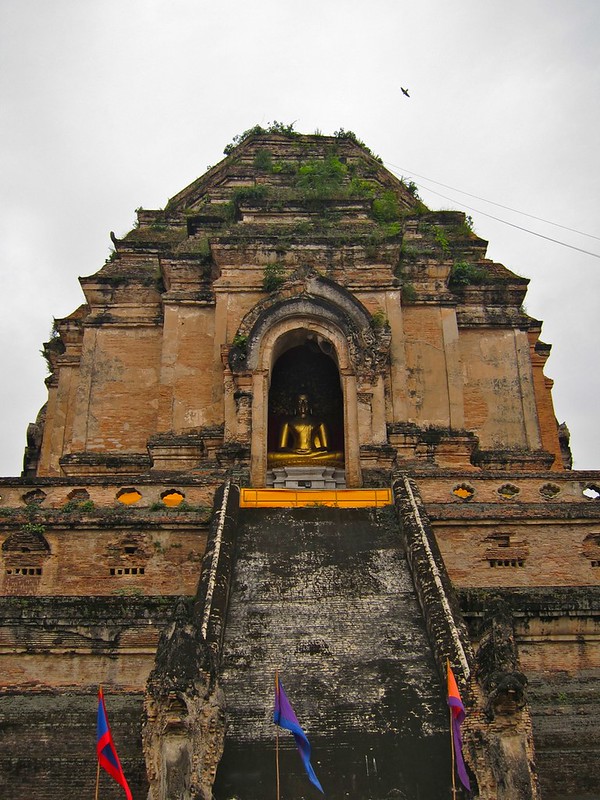 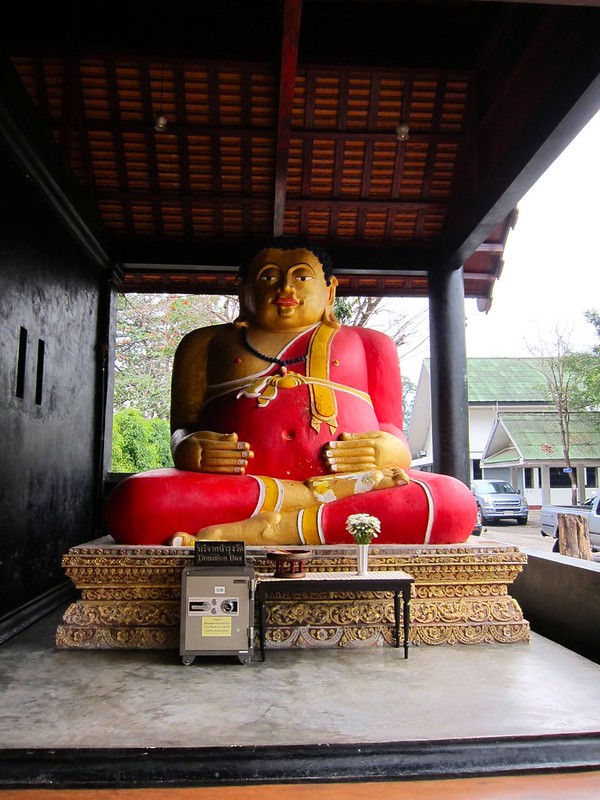 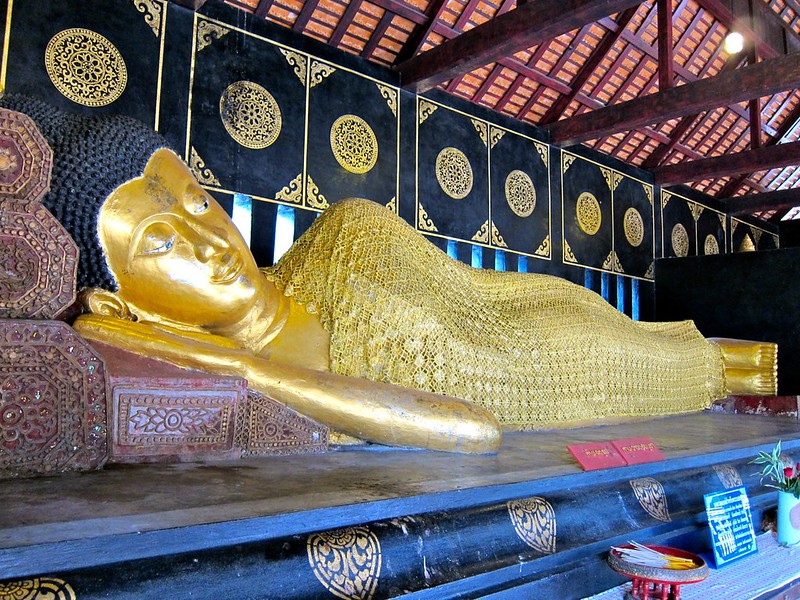 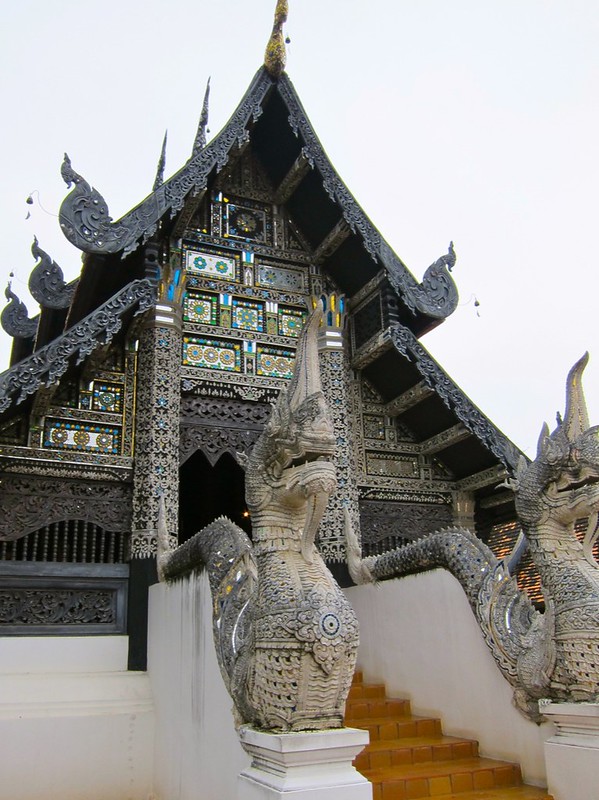 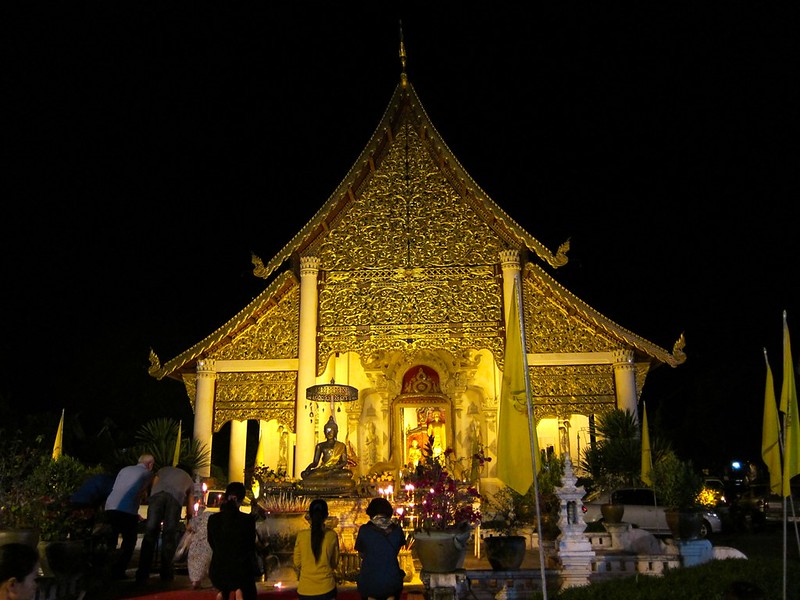 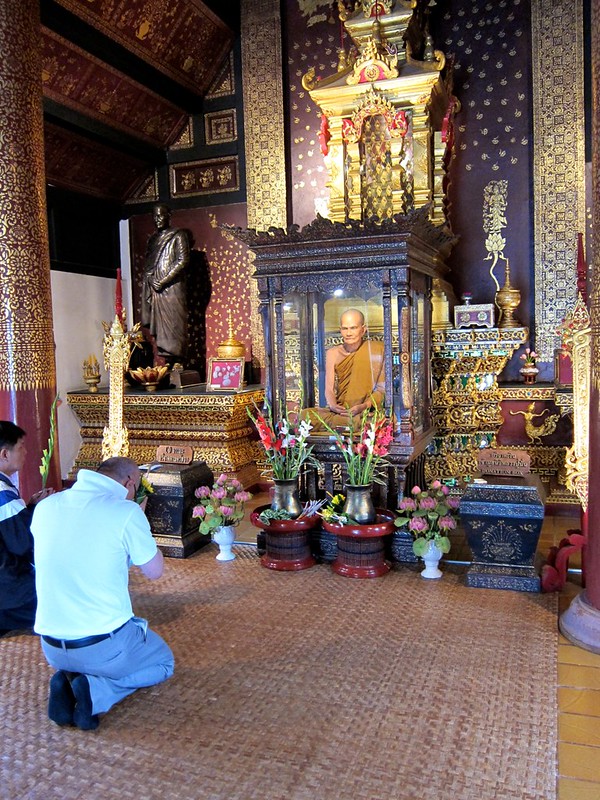 Your guess is as good as ours on this one, found hanging outside one of the main temples:

Much to our surprise, the Chiang Mai nightlife was a bit disappointing! It seemed almost every bar in town was set up to cater to foreign sex tourists (with female bar “hostesses” chatting everyone up, and fairly unexcited to see a couple like us), and we never really found anything worth returning to.

One night, though, we went to a ladyboy bar! In Thailand, ladyboys – or male transexuals – are fairly well accepted and integrated into everyday culture, and most Thais tend to consider them to be a third gender. Unlike the other hostess bars, our hostess friend at Ladyboy Bar did not disappoint. He was hilarious, at one point making Steph (Ok, and me also) try on his 8 inch stilettos. 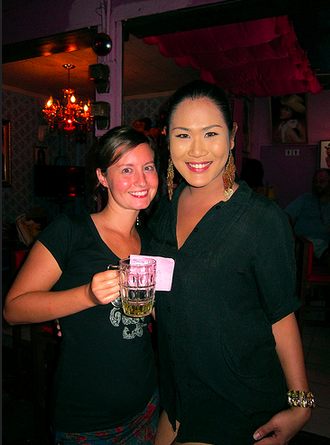 The head “madam”, entertaining a customer behind us.

And with that, it was time to move on…

We’ll remember Chiang Mai mostly for its food and night markets – perhaps we’ll be able to return another day to see some of the other reasons so many people seem to love it.

Here we are on the way out of town, before we stole this guy’s tuk tuk. 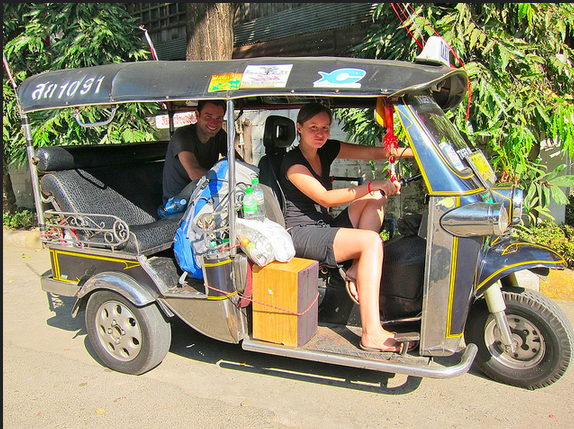 (In reality, we hired this tuk tuk driver and his legit-crazy woman-friend to take us to the post office to pick up a letter from Steph’s parents and then onward from the post office to the bus station. Once we got to the post office, the tuk tuk woman started asking Steph if we had a camera with us… Steph said “Um…. yeah…??” The woman’s response: “So we can take fun pictures!!!” Thinking it was a little weird, we took out our camera and entertained them with a few minutes photoshoot of us all posing in the tuk tuk. Gently reminding them that we were a little late for our bus and that we should probably put the camera away now, they said OK OK, we all piled into the tuk tuk, and that was that! Oh, Thailand……)

3 thoughts on “Traversing to Chiang Mai”