After Munduk, we caught a ride south to Ubud, a small town that is hugely popular with tourists for its numerous art galleries and fascinating displays of Balinese culture. We were very skeptical about going to Ubud knowing how touristy it would be and yet simultaneously enthralled by the prospect of seeing some amazing aspects of Balinese history and culture that can only be found there.

For one, Ubud is home to the Sacred Monkey Forest of Bali– a park containing an ancient Balinese temple crawling with macaque monkeys that run the spectrum from adorable and hilarious to downright terrifying. I didn’t know anything about the Monkey Forest before casually strolling up to its entrance, and I half-expected that the monkeys would be few and far between, possibly viewable from several meters below their safe habitats up in the trees. Instead, I was at first pleasantly surprised (and later horrified) to find that they are literally everywhere; from the moment you enter the park, monkeys swarm at your feet in search of a handout and eye you from low-hanging branches mere inches away as you casually try to avoid their glances. They literally drape the temple walls, making this beautiful, yet haunting, place even more spooky and surreal. At one point, Scott made the mistake of making googly eyes at an adorable baby monkey sitting at eye level with us for too long, causing its not-as-adorable dad to literally run after Scott, trying to bite his ankles! We watched another monkey repeatedly jump up onto a young woman’s shiny white purse and attempt to probe at the contents inside, terrifying the poor woman. Despite the too-close-for-comfort encounters, we had a blast walking through the beautiful trails and snapping some pics of the less-hostile inhabitants: 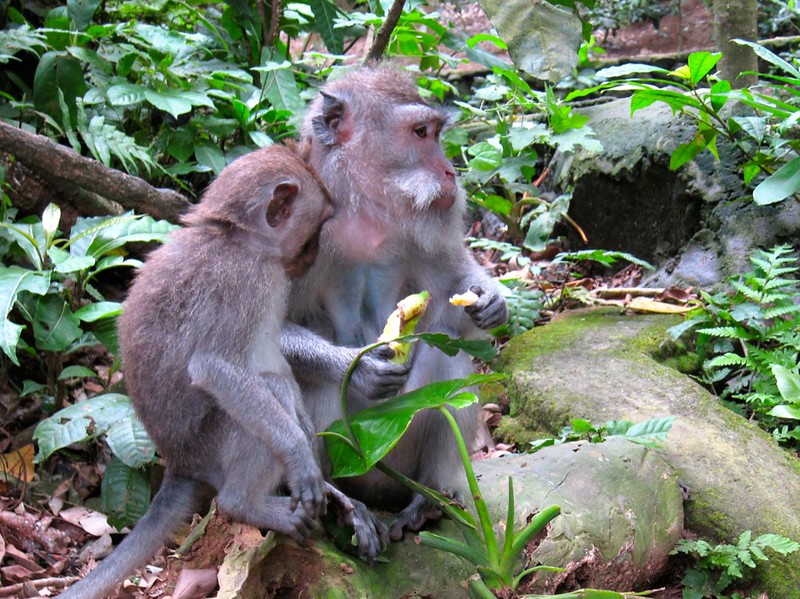 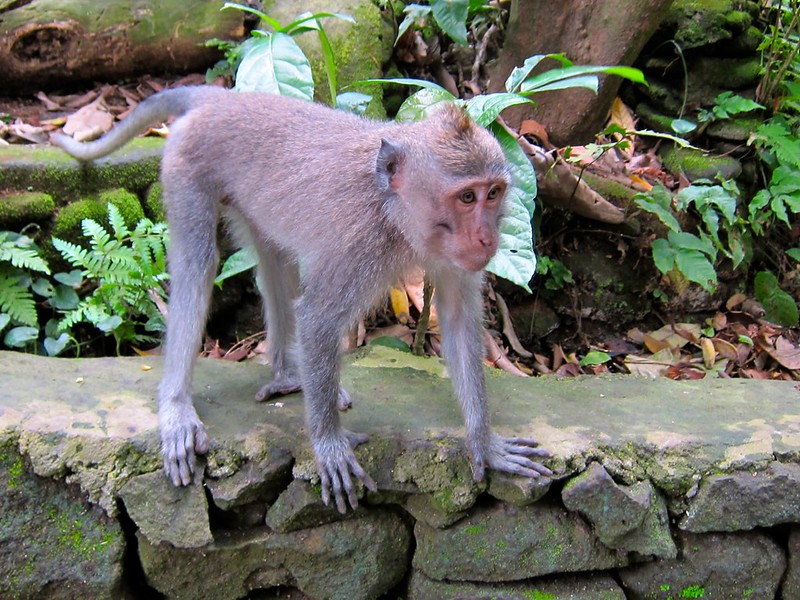 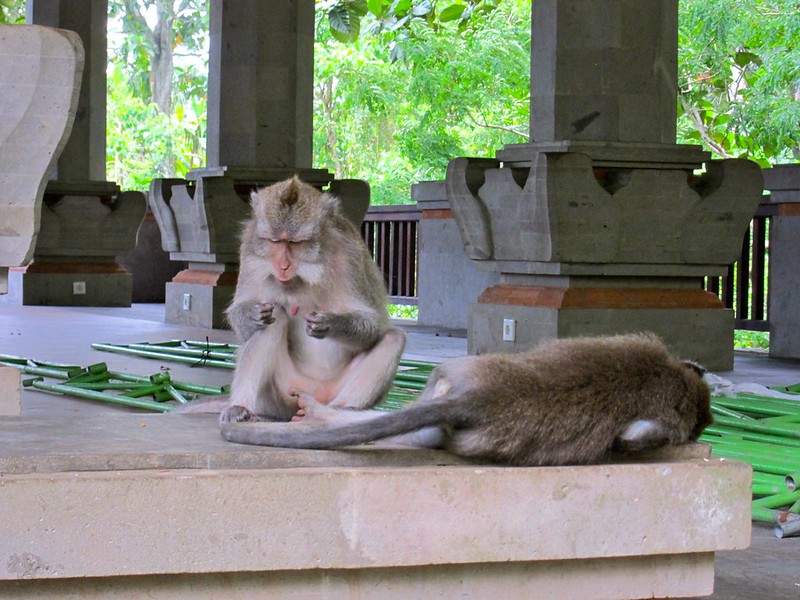 One of our favorite monkeys was a mother who had a tiny black newborn clinging to her chest and a hankering for the taste of algae-clad temple walls: 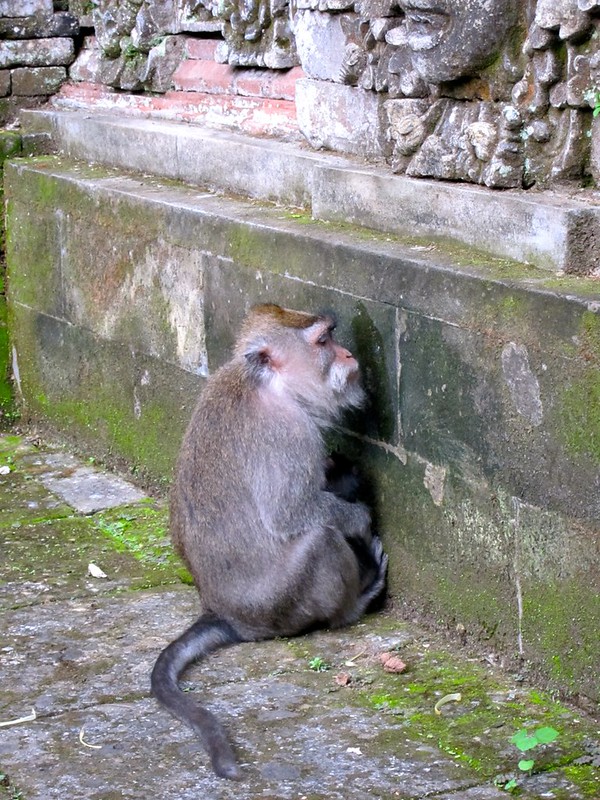 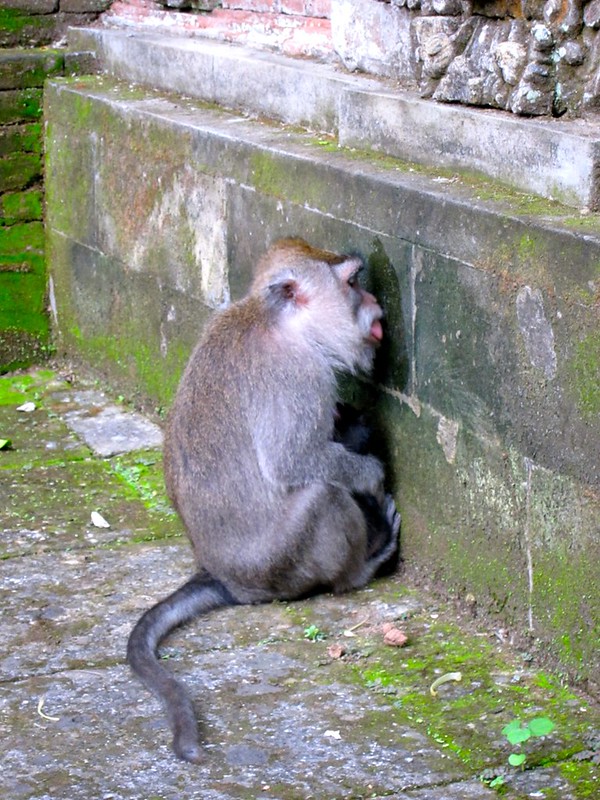 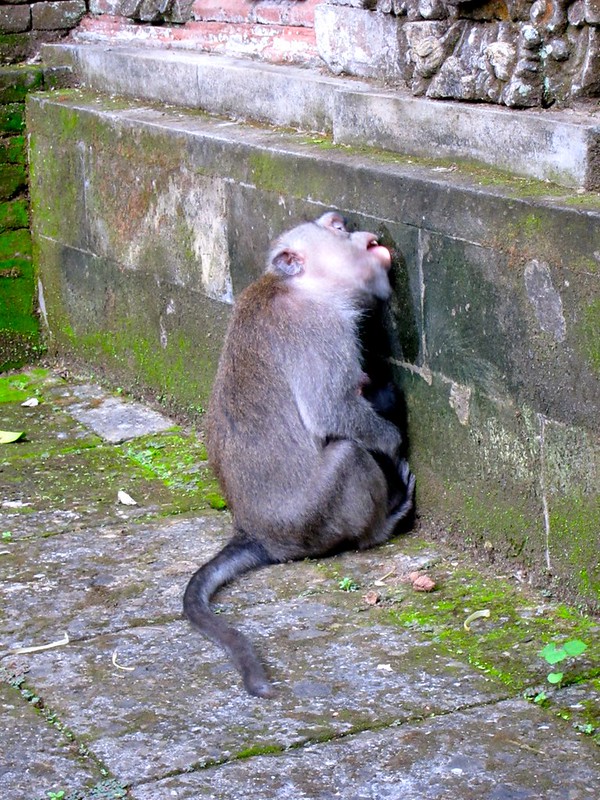 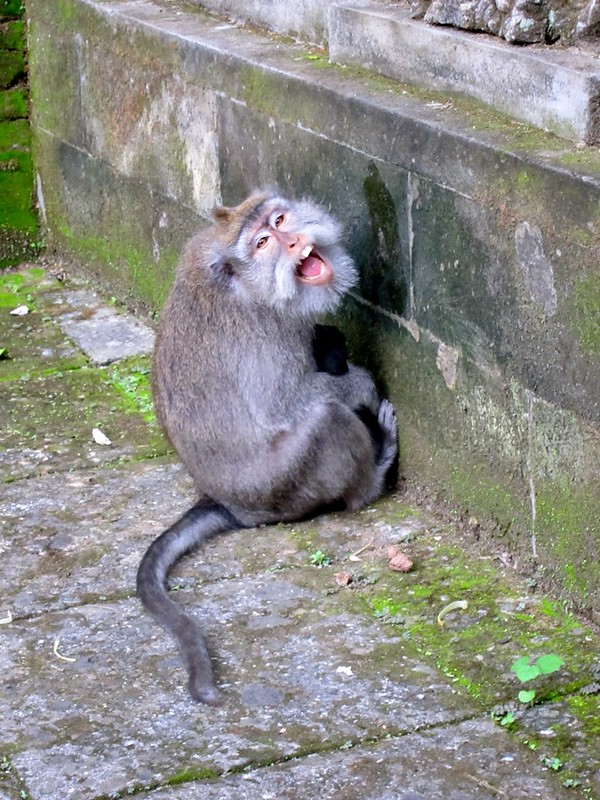 Another one of the temple’s inhabitants contemplated the meaning of life (or perhaps his chances of snagging my shiny earrings) from his perch within the main temple:

Pura Dalem Agung temple within the Monkey Forest (above: wearing a rental sarong, required to enter the temple):

The second major reason that we had for visiting Ubud is that Ubud is one of the only places in Bali that foreigners can easily observe traditional Balinese dances. One of these dances, the Kecak, had captivated us since we first learned about it while watching the amazing short film “Baraka” over 10 years ago (check it out if you have not seen it!). The Kecak, or “monkey chant” is performed by concentric circles of at least 100 men, wearing checked cloths around their waists and chanting the “kecak”, intended to induce a trance-like state in the chanters.

Video of the Kecak (you will definitely want to turn the sound up for this one):

Following the Kecak, the chanters cleared the stage and a single man appeared to perform a second dance called the Fire Dance. The dance began with the man straddling a home-made “horse” made of wood and straw, moving around a bonfire. He then (quite shockingly and very ceremoniously) ran barefoot across the fire, purposefully kicking piles of burning embers into the feet of the audience. He persistently continued to run into the smoldering embers, his feet becoming blacker with each pass through the fire. After a final pass and a futile “struggle” to break free from the other performers who were “taming” the horse, he literally collapsed at the edge of what remained of the fire, where he remained until the we, the audience, were gone. 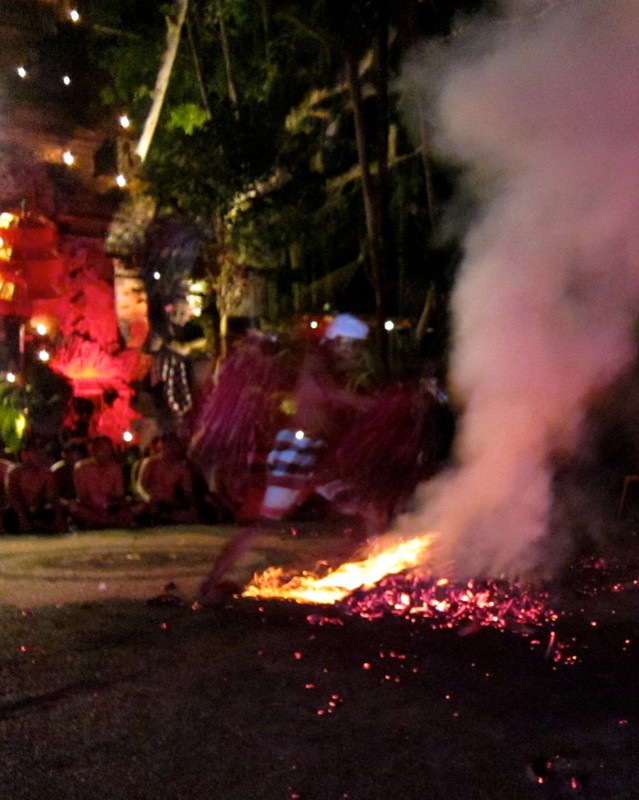 On our last morning in Ubud, we awoke at 4:30 to make an early morning trek along one of the many beautiful valleys on the outskirts of town– a nice respite from the craziness of the central village and a reminder of why Ubud continues to be loved by millions of visitors every year– rightfully so.

One thought on “A dose of old Bali in Ubud”