I’m sitting on the veranda of our room just after dawn, and the village of Sideman is already bustling with activity. Motorbikes zoom past out on the main road, and from our porch I can barely pick out tiny silhouettes of farmers plowing the rice terraces below. But I’m up late for a town in which the central market is already a hive of activity by 3:00 AM (although I’ve yet to see it at that hour…). From here, it seems I can see all of Bali. To the west, the ocean is just visible between two jungle-clad mountains. To the east, Mount Agung, the highest mountain on Bali, looms in the distance. Today the visibility is clear enough to see its summit, although most days misty clouds settle into these valleys long before we’ve arisen.

To the north, tiny huts dot the impossibly green landscape, and a waterfall gushes off to one side, nourishing the surrounding rice fields. Heading down into the valley from our porch and up the other mountainside sits another village directly across from us, at eye level from here. At night, the sounds of a gamelan, an ancient Balinese instrument, float across the valley from that village to the steps of our front porch.

The village of Sideman (pronounced si- da- men) is where we have called home for the past 6 days now, and I don’t even know where to start. Do I start by talking about the gorgeous scenery, or perhaps the incredibly friendly (and talkative!) people that have been teaching us about Bali? Do I ramble on about the interesting new fruits that we’ve discovered or about the ancient, ornate temples that dot every street corner? What about the hours of conversation that we’ve been enjoying with our Balinese hosts that I desperately want to remember every detail of?

Maybe the best way to start is to talk about what brought us here in the first place and how little we realized we were in for.

I knew very little about Bali before coming here. Like anyone, I had always entertained romantic notions about the culture of Bali, rife with ancient rituals, filled with haunting images of chanting and animal sacrifices — all very romantic-sounding but the type of experience that is always out of reach of a tourist’s eyes. To be honest, one of the reasons that we ended up in Bali in the first place is that we needed to find a cheap flight out of Thailand to show “proof of onward travel” to the Thai immigration officers– a ticket that we potentially would never use.

Luckily, we did end up using that plane ticket. Once we arrived in Bali, we took a minibus, public bus, and then bemo (local minibus) (which is an adventure best saved for another blog post) direct to the village of Sideman. The people of Sideman have been utterly shocked and tickled each time we tell them that we came straight to their village from the airport without stopping in any of the tourist hubs like Kuta or Ubud. Sideman is a very traditional village, far off the tourist trail– the kind where every child that sees us still screams “hello!” to practice their English and where the ancient traditions of Balinese culture are still very much an integral part of everyday life.

Every morning after we eat breakfast, we spend far too long chatting with our villa’s caretaker, Ketut. Ketut is an amazingly kind, hard-working guy several years younger than us who relentlessly and openly answers all of our questions about Balinese culture, religion, and traditions. Of course, one of the reasons that Bali has fascinated so many people over the years is that the people on Bali practice a unique form of Hindu religion, whereas the rest of Indonesia is largely Muslim. The Balinese people are fiercely proud of their Hindu traditions and are happy to share them with outsiders.

One morning, Ketut began telling us that his family was going to be holding a cock-fight later that day and that we were welcome to attend with him. Ketut went to ask his brother what time the fight would be happening, and returned to tell us that we had missed the fight but that his brother had won! We learned later that during a cock-fight a small knife is tied onto the arm of each rooster for the duration of the fight, and we were secretly glad that we didn’t have to witness it. Although it’s perhaps easy for outsiders such as ourselves to condemn people who participate in cock-fighting, we learned from Ketut’s friend Futu that, despite now being illegal in Bali, cock-fighting is still a requirement for Balinese who live in traditional villages. The village temple dictates when a cock-fight will be held and requires each family to either bring a rooster to the fight or pay a large fee– a fee that many Balinese simply can’t afford.

Luckily, Ketut said that his family would still be holding their annual family celebration, a religious holiday in which the entire family gets together from all over Bali to gather in the village temple to pray, celebrate, and feast, and that we were welcome to attend that with him. He went on, “I’m sorry, but so you know, for woman who is pregnant or menstruating, it is forbidden to enter the temple,” (because they are considered unclean). Luckily, I was deemed OK to participate in the festivities…

Around 3:00 that afternoon, Ketut flew Scott and I one by one up the mountain on his motorbike to his family’s home– a walled-in compound of a few concrete rooms, a small family temple, and a dirt yard overrun by a couple of prized roosters. One woman busily applied mascara to a tiny girl in a beautiful bright purple sarong, and the men (who were already dressed and waiting–SO typical) strolled around laughing, smoking cigarettes. The women took me inside one of the rooms and helped me into some traditional clothing, including a beautiful gray flower-printed sarong and white embroidered top. Ketut’s aunt even took the time to clip my hair up into a matching flower hair piece. Meanwhile, Ketut helped Scott into a sarong and a traditional head wrap.

When the entire family was ready, we weaved through the center of the village (somewhere we had never been able to visit on our own) through a series of confusing low concrete walls, up one row, and down another, until we finally reached the inner village temple– a communal site that is reserved by each family within a strict 3 day period for the purpose of this very festival that we were about to witness. 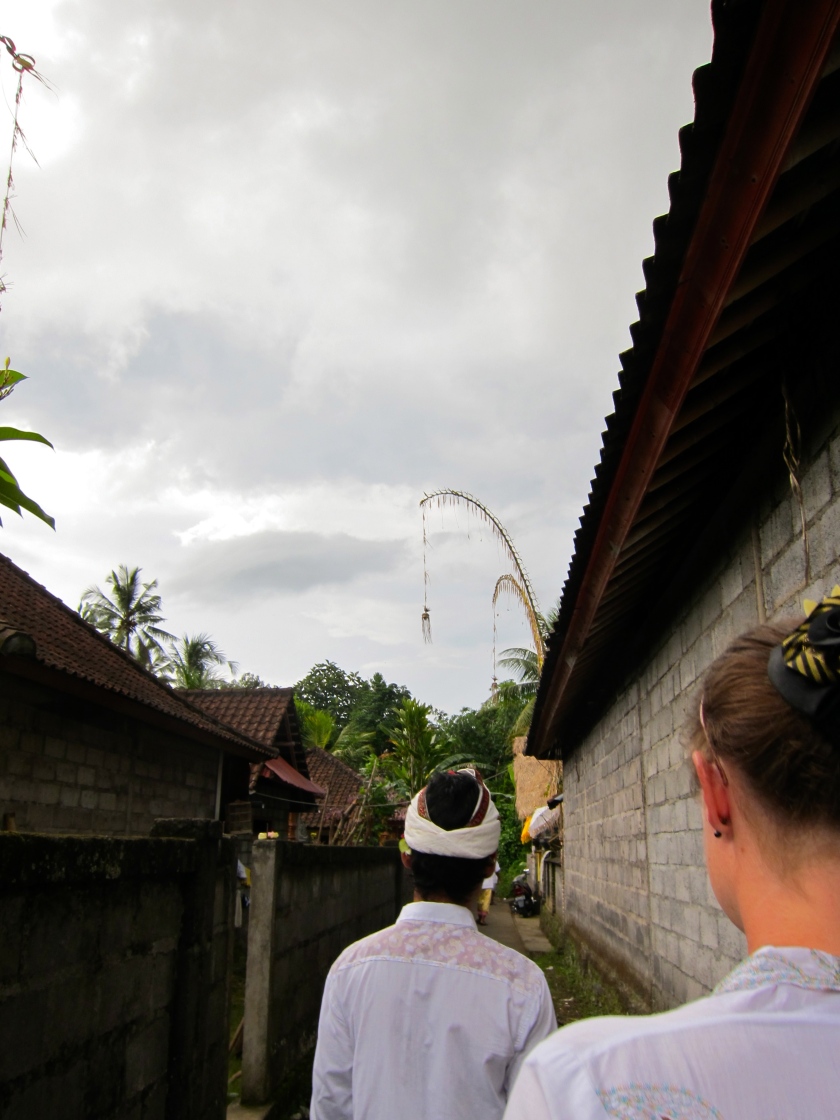 “During the ceremony, we play Dominoes,” Ketut explained.

Thinking his English was off, I corrected, “Oh, you mean, you play Dominoes before the ceremony starts?”

“No, we play DURING the ceremony,” a smiling Ketut retorted. “For fun.”

So we sat down with Ketut and his family just outside of the main temple and watched countless rounds of Dominoes, speaking with those who knew some English as best we could. Luckily, many of the men wanted to practice their English, and we always felt overly welcome. Some people asked, “Where you from?” and “How long you stay in Bali?” Most people wanted to point out the fact that Barack Obama would be coming to Bali in 3 days! 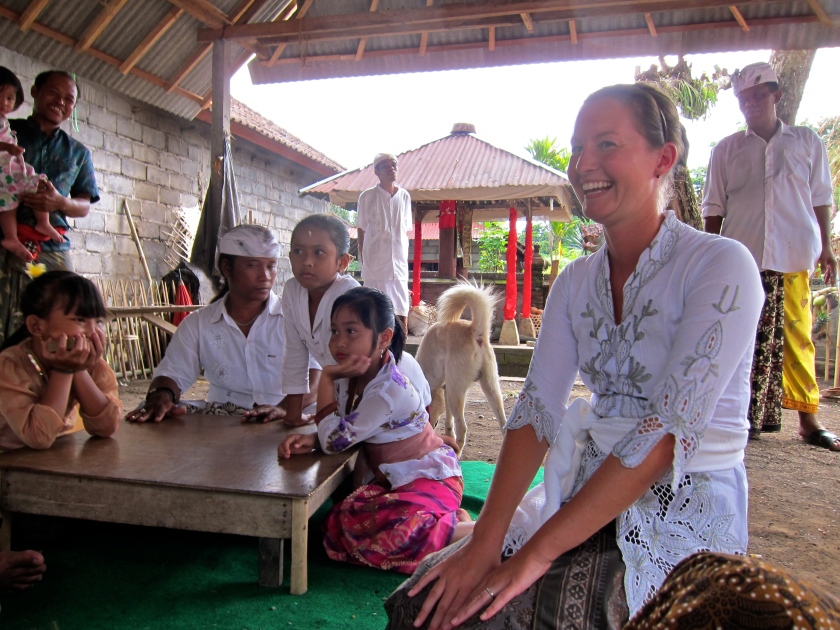 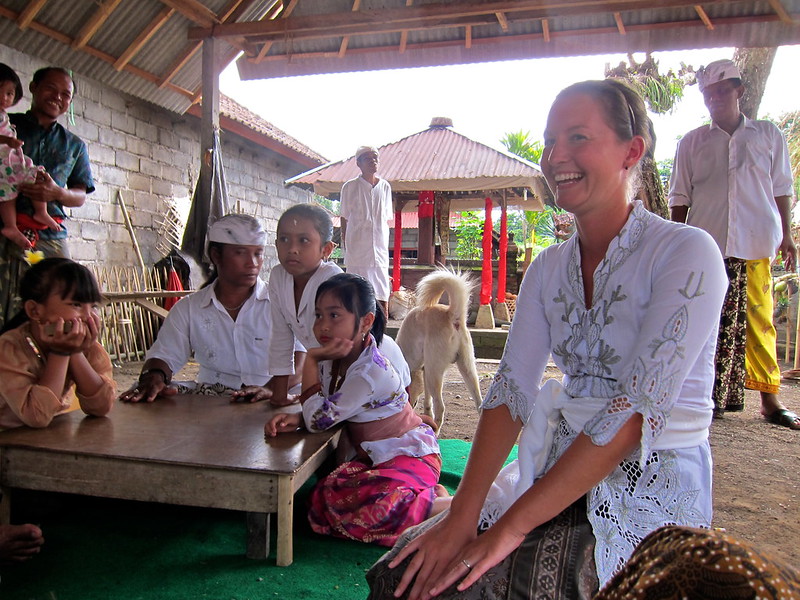 While the men played Dominoes and smoked their cigarettes, the woman shuttled countless offerings, made of woven baskets filled with rice and fruit and incense, into the village temple to prepare for the main ceremony. Once the priest arrived, we were invited to follow Ketut into the temple, where we sat in a light rain, our palms upturned, our faces being sprinkled one-by-one with holy water shaken off a flower petal by an old Hindu priest. And in a moment of utter shock and realization, I wondered how we had ever gotten to this moment. Like a rabbit hole, going deeper, deeper into Asia, right into Indonesia, then Bali, then into this village, up one row and down another, to this temple, to this moment. 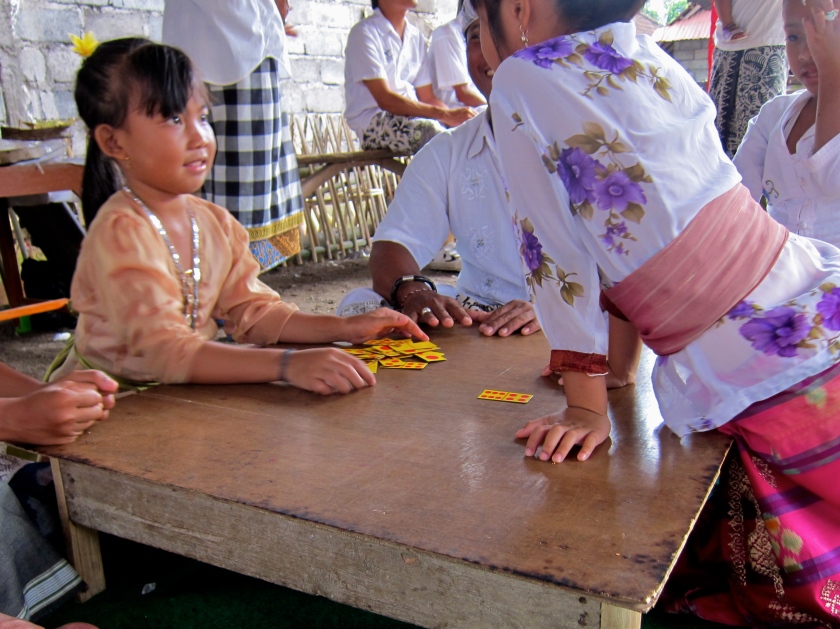 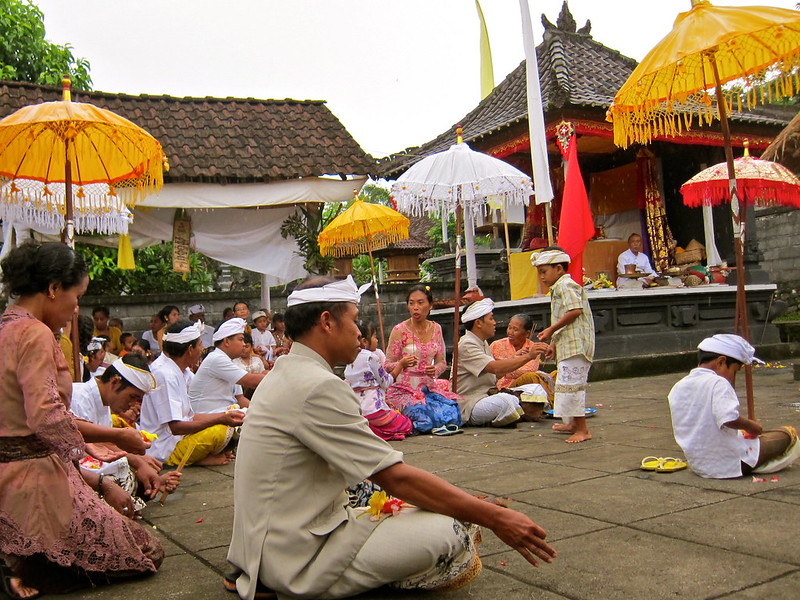 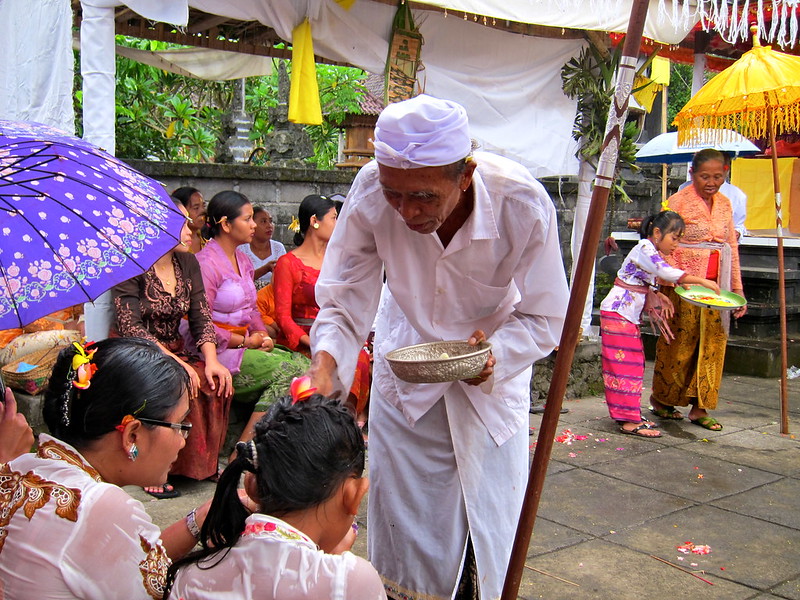 After the group prayer, we returned to the gathering area outside of the temple, where more Dominoes were in order. Then we all shuttled back into the temple again (still following? :)), where the priest blessed the offerings that had been brought. As a final offering, a young black chicken was brought in, and its head was severed by the priest, who added its still-clucking head to the offering plate. Next the priest gave us a few grains of raw yellow rice, both to chew and to press onto our foreheads, where it would stay until it fell off. The adults then paraded around the temple grounds with the offerings at least 5 times, throwing old Balinese coins to the ground for the children to race to snatch up. 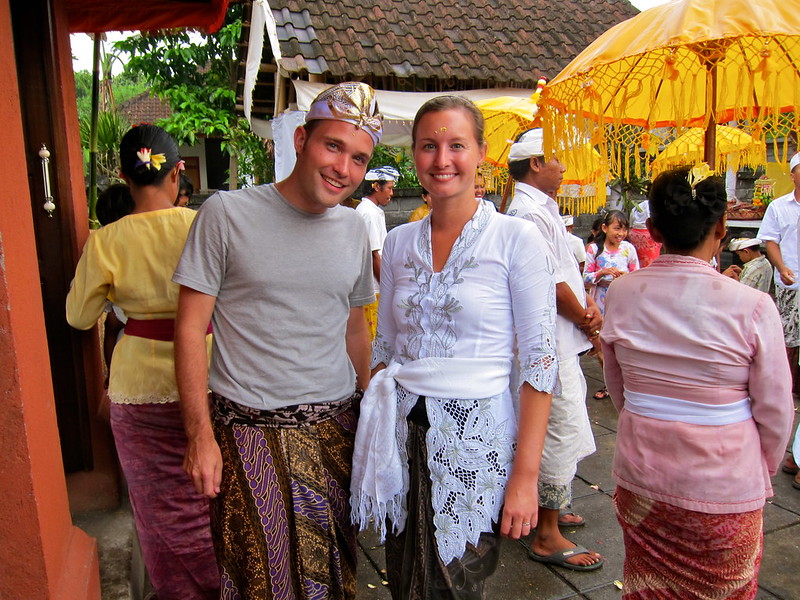 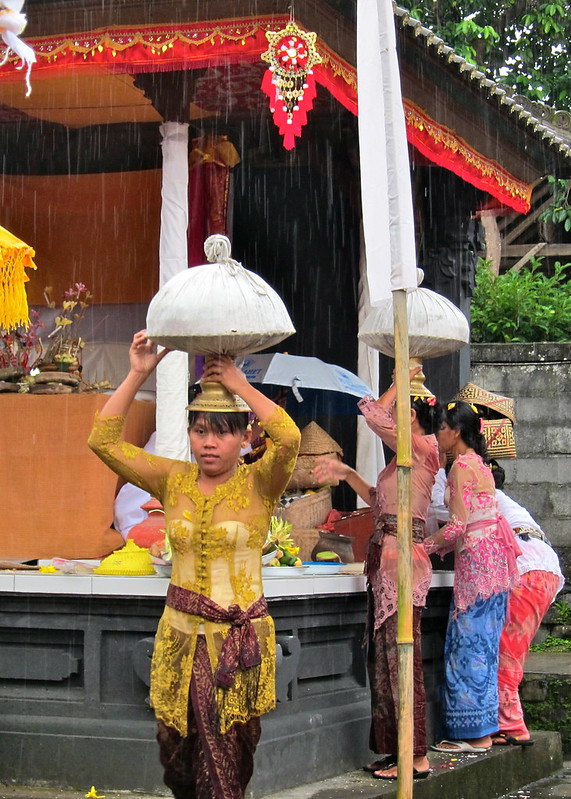 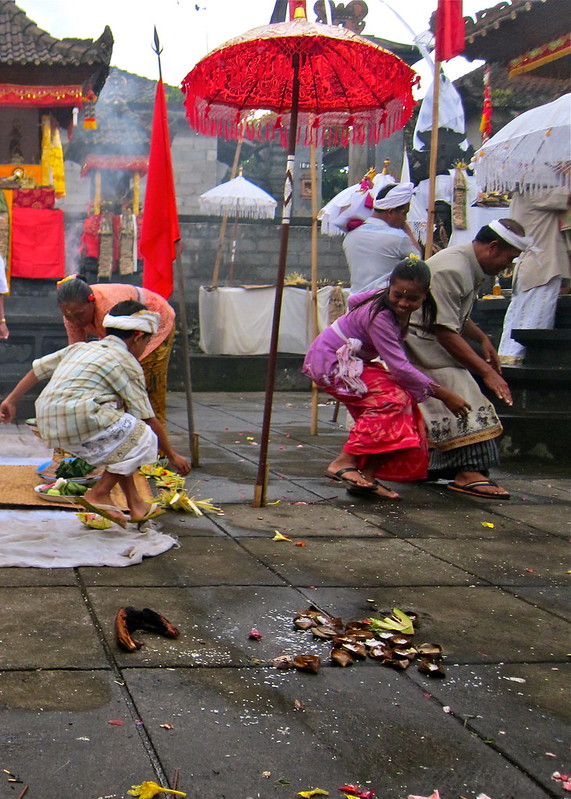 After the ceremony, everyone paraded out of the temple to a different, smaller temple, where more praying occurred and several people asked for me to take their picture.

Back at the gathering area again, Ketut told us that we would now have a feast together. First, people brought us little snacks, such as steamed rice puddings filled with toasted coconut wrapped in banana leaves, and delicious thin fried crackers embedded with chills and basil. Meanwhile, people laid down mats of woven palm fronds that would serve as platters for the food, and piles of rice and stewed chicken were piled on top. Ketut had told us that his family never gets to eat chicken except at this annual ceremony– so where did this chicken come from? It was the losing rooster from the cock-fight earlier that day, of course! No plates, no utensils, just everyone digging into one big pile of rice, beans, and all sorts of delicious [unidentifiable] loser-chicken parts. 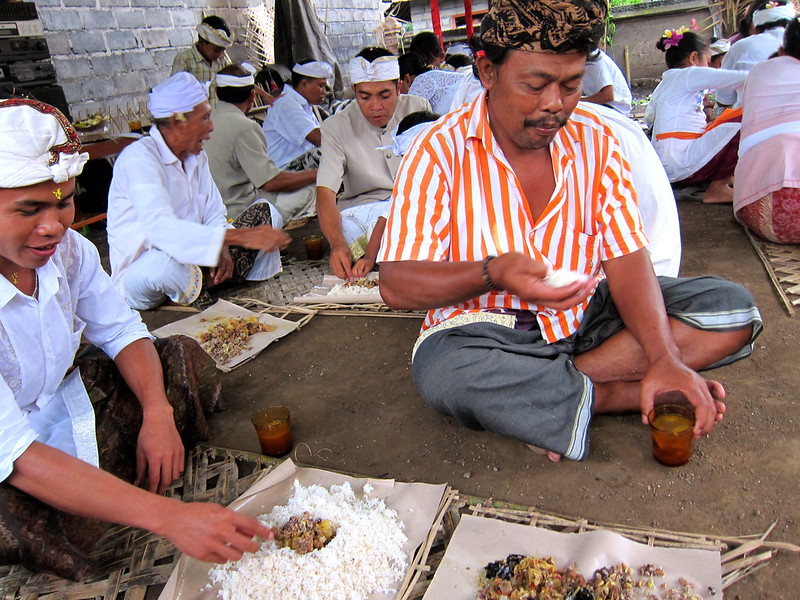 Back to this morning, my thoughts still ruminating on all that we have just been privileged to watch, and I think, “just a cheap flight from Thailand.” Is that all Bali is to me still? Despite Bali’s overt tourism and problems resulting from over-development, Ketut has shown us that the spirit of Bali is still very much alive, and it lives on in these rituals, through these people, as it has for thousands of years. Everyday it lives on on this island, in this very moment, in this village, up one row and down the next.