What a week! After a wonderful but brief homestay in Kiriwong, we hopped on an A.M. Songthaew and headed – once again – for the west coast town of Krabi, this time to grab a ferry headed for the island of Koh Phi Phi Don.

Koh Phi Phi Don is likely to be the most heavily tourist-trafficked-and-touted of all the islands off the Andaman coast of Thailand (perhaps with Phuket as an exception). This comes as no surprise, as the natural beauty of the island’s sandy beaches, limestone cliff coastlines, and lush mossy interior trees gives it a bit of an unfair advantage over its neighbors.

Its popularity does come at a cost for those looking for something further from the hard-packed tourist trail, as we usually are – this place is far from that! But its location served as a convenient stop on the way to Phuket (where we’ll need to catch a flight), and frankly, we really wanted to see the place anyhow, so we hopped on the ferry knowing exactly what we were getting into – once again, we enjoyed ourselves thoroughly.

Me upon arrival, reacting to the splendor before our very eyes: 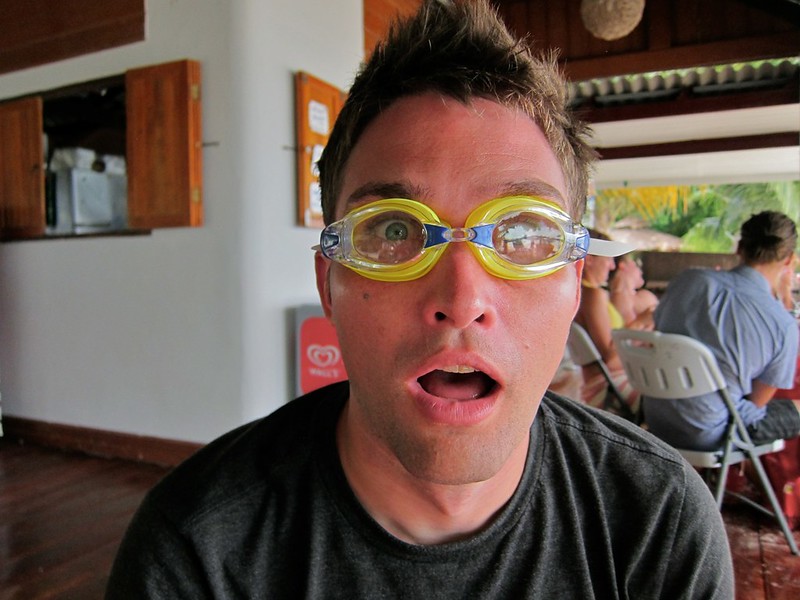 We arrived at the docks of Phi Phi Don in the afternoon and checked into our 600 baht/night bungalow (~$18 USD) at Flowers Bungalows, in the middle of the village. As expected, the room was a simple and very rustic bamboo room with a bed, mosquito net, fan, cold shower, and actual-flushing toilet (most toilets we’ve seen here are of the manual bucket-drop flush variety). Judging the quality of the accommodations in the village, it’s not hard to tell why many twenty-somethings come to Phi Phi Don: beaches and parties. Anyway, from there, we proceeded through the village to the beach on the opposite side where many restaurants and bar/clubs line the sand.

As one does in Phi Phi Don, we immediately broke our thai-food-only streak that we’d been holding strong since our arrival several weeks ago in Bangkok; an authentic Italian restaurant with pizza was far too tempting to pass on (anchovies and capers). 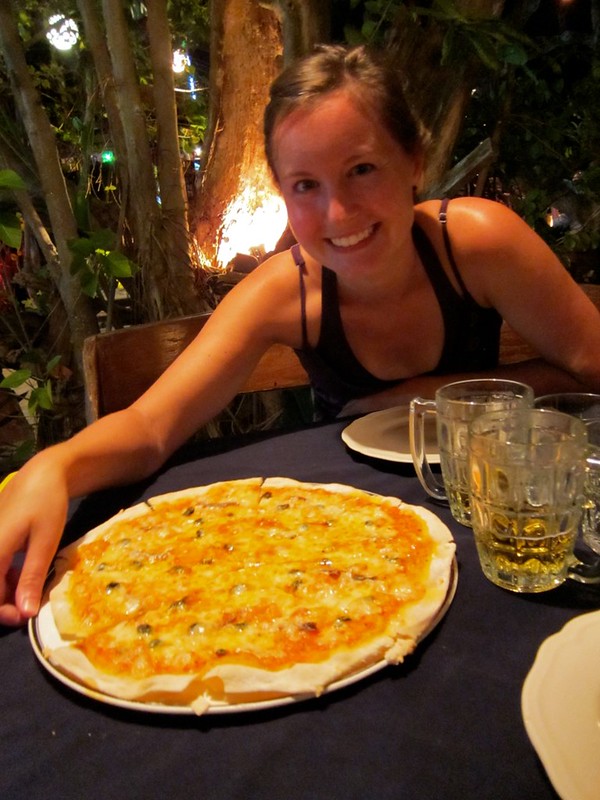 That night (and the other two we were there) we were treated to some spectacular fire shows on the beach. With our pyro-culture in America, it’s a wonder this stuff has never made it to the States: guys twirling, flipping, and juggling gasoline drenched, flaming rods and ropes in the dark (perhaps it has to do with the very real danger of serious injury…). Anyway, when twirled fast enough, the flames blend like flowing water, and the mostly-Euro crowed gathers ’round to trance-dance to insanely loud drum-and-bass all the while. Judging by their uninhibited dance moves, we had to assume this spectacle is even interesting to partake in after ingesting some of the “magic” treats found in the village, but we can’t confirm. 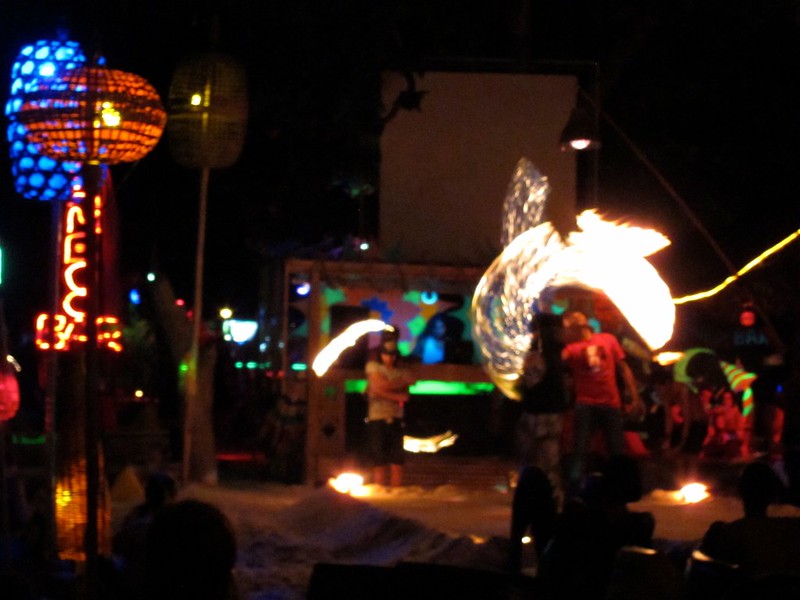 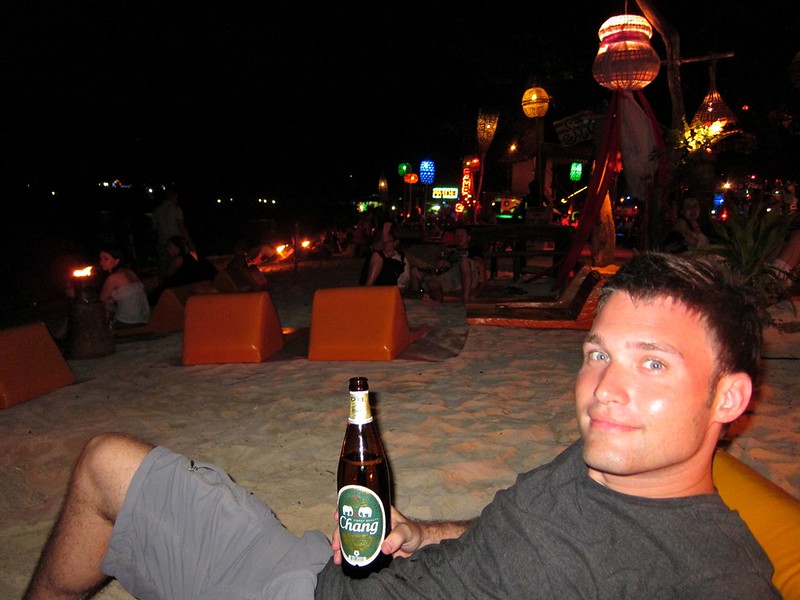 We can confirm, however, that the “buckets” – each consisting of a flask of Thai “whiskey” (rum, basically), a soda, and usually a Red Bull – proved a nice and cheap way to enhance the whole beach party experience. These were found all over the sidewalks in the village, or for a little more cash in the bars:

In all, we stayed two nights on Phi Phi Don up-front, with an offshore detour in the middle that we’ll blog separately, and then were back again for one more night after that. Part of each day was spent wandering the village and browsing the shops, which were filled with all sorts of clothing, handicrafts, massage stands (like, every 3rd shop!), and foods international and Thai.

Overall, the atmosphere on Phi Phi turned out to be an alright mix of touristy and local flavor – unlike Koh Hai, many Thais actually do live on Phi Phi Don, and we found most of the foods, sights, and customs we’d seen all over Southern Thailand here as well: great food stalls, friendly cats roaming every surface of everything, spirit houses, Buddhist offerings on the sidewalks (foods prepared and left for the spirit world – and naturally enjoyed cats and monkeys). 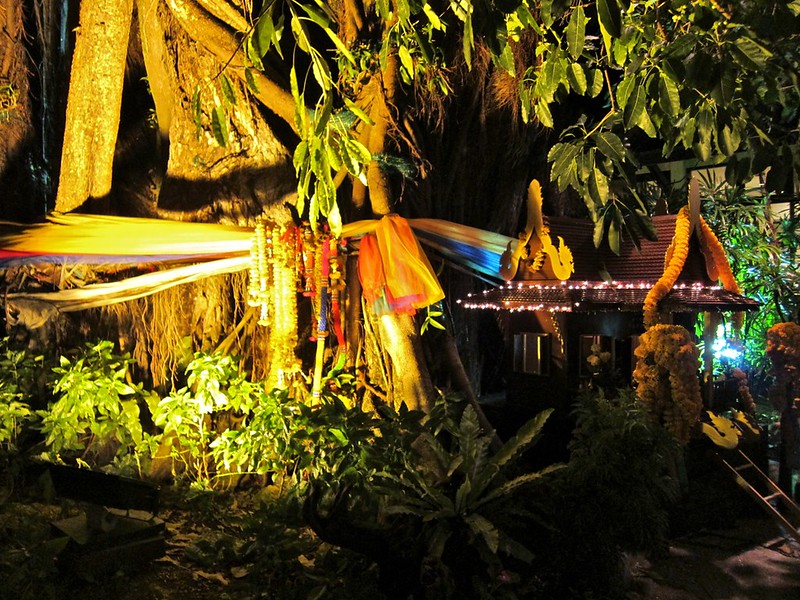 We found some interesting sights in the village at night as well. One highlight was finally getting to see some Muay Thai boxing, which was something we had wanted see while we were in Thailand and we had unfortunately missed out on seeing it in Bangkok.

Given where we were, the boxing in this particular place was mostly geared towards convincing drunk farangs (westerners) to hop into the ring and punch their buddy in the gut, but they did have some actual trained Muay Thai fighters with scheduled bouts as well. During those fights, we found the rituals, fighting style, and humble respect among the fighters fascinating. 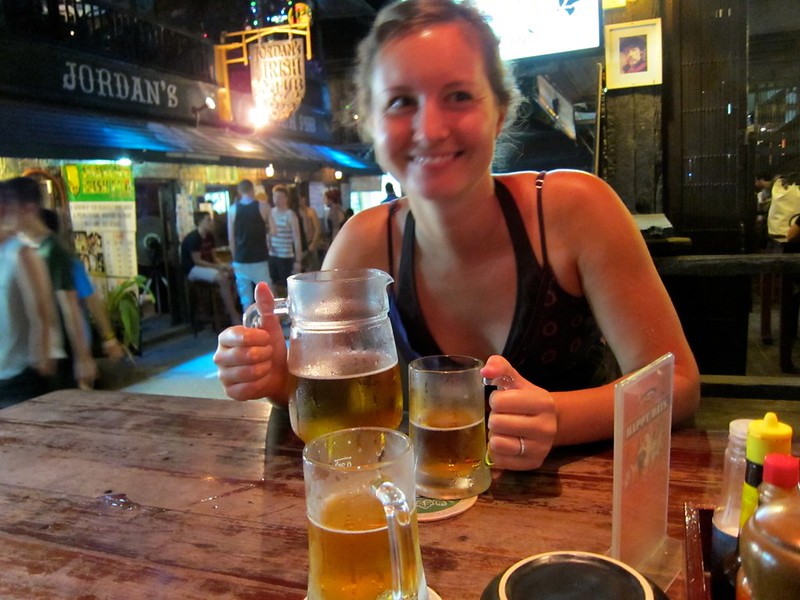 The rest of our days were spent finding beaches on parts of the island where the tourists were a little too lazy to hike, where we could read books and practice handstands and such. 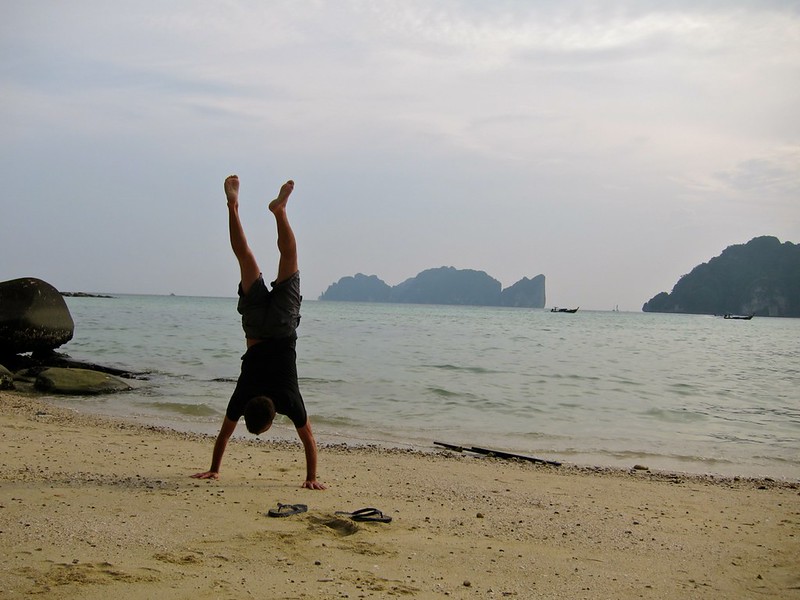 The last day, we squeezed in some internet cafe research time before boarding the boat to Phuket, where we stayed a night or two before heading to the airport. ‘Til next time!

Now to write more about that detour…