Last week we left Bangkok on an overnight train headed for the South of Thailand. Originally we had planned to spend some time in Northern Thailand , but the flooding throughout the central plains had blocked all major highways and railways out of Bangkok to the north. We had even originally intended to spend another night in Bangkok, but with the flooding heading our way and the sandbags piling up outside storefronts, we thought it best to get back on the road…

We took the train to a town called Surat Thani and then switched onto a bus headed for Krabi, on the West coast of the Thai Peninsula in the Andaman Coast.  The bus ride started out great–we had AC and some crazy Thai music pumping in our glammed out ride—

30 minutes later………  Scott was soaking wet from the continuous drip of icy water from the AC condensing above us. At one point, it was so bad we decided to get out our dry bag to catch the water–we had a good 2 cups of water by the end of the first tape album.

In an ironic twist of fate, the bus then lost all AC and reached an uncomfortable/truly terrifying 120 degrees. Scott was right in the sun and was not doing well:

(I got amazing pictures of the sweat pouring off of his arms, which he would not let me post…)

Luckily, we had our bucket of water in our dry bag that we had collected that I was able to use to pour over our heads. 🙂

We finally reached the town of Krabi, just in time to snag a place for the night and eat at the night market before heading out again the next day…

The next day we basically threw a dart at a map and decided on heading on to the island of Ko Lanta, in the Andaman Sea. We were confused when we were told we would be taking a mini-bus to Ko Lanta–  a bus? to an island??   It all made sense when our minibus drove right onto a car ferry and shuffled us right across to the island!! 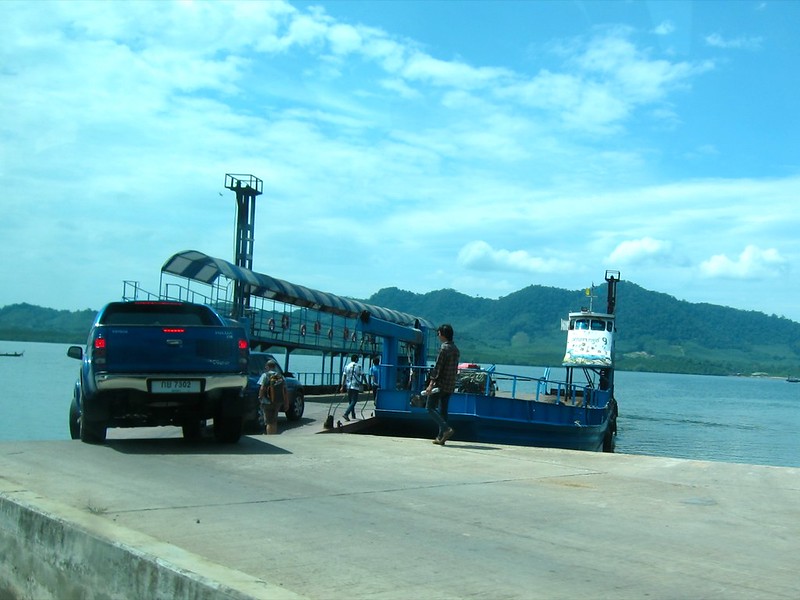 For the week that we were on Ko Lanta, we stayed at a little Thai-owned and -run place called “Where Else”, right on the beach. Each bungalow, each and every detail, from the walls, to the sinks, to the wood shelves, had been made by hand, gradually being added to over the 14 years the family had owned this property. They not only lived on the property but also continued to work on it every day we were there, adding new hanging hand-woven lanterns or buoys that had been strung together, resulting in a crazy but cute amalgamation/ explosion of washed-up beach life.

Our bungalow was extremely rustic, with nothing more than a bed, mosquito net, cold shower, and manual/bucket-flush toilet, but it had everything we needed:

At our local watering hole, the “Feeling Bar” at Where Else:

It would have been perfect were it not for the CONTINUOUS flow of various animals that we would find in our bathroom each day.  Within two minutes of our arrival I sat on our extremely low toilet, just to find a super slimy lizard/snake slithering right at me, forcing me to pick up my feet despite my already extremely uncomfortable crouched position.  Later, we found 2 hermit crabs (we could hear them every day–they lived in the corner of the room–), a rat that kept stealing and eating our soap (the bars that he left behind had little teeth marks in the morning), and an abnormally large wasp-type animal that burrowed in the rock gravel, always in the same spot, despite our attempts to oust it by filling its hole with rocks, covering the hole with enormous rocks, and flooding the hole with water–all to no avail. Better than our neighbors who apparently had a monkey in their bathroom eating their medicines all night!!

On our first full day on the island, we decided to try our hand at Southeast Asian motor-scootering for the first time. For most of the people who live here, a motor scooter is their only vehicle and therefore their only way of transporting entire families (usually up to 4 people on one bike!), bulging grocery loads, bird cages filled with birds (everyone seems to have bird cages here), 20-foot step ladders– everything.  Interestingly, most of the population on this island is Muslim, so we quite commonly see a woman flying down the road on a motorcycle with 3 kids, a bird cage, sunglasses, and a burka blowing in the wind.  It’s an interesting culture, indeed.

So we decided to try it out for ourselves. For $6/ day, the fun we had on our little hog couldn’t really be beat.    We explored remote villages down muddy side roads, came across an old Buddhist temple and deserted beaches… We were a little unsteady on it at first; by the end of the day, we were flying down a washed out muddy road with bagful of groceries in one hand, and a pile of freshly-washed laundry from the woman down the road in the other— truly riding in Thai-style. 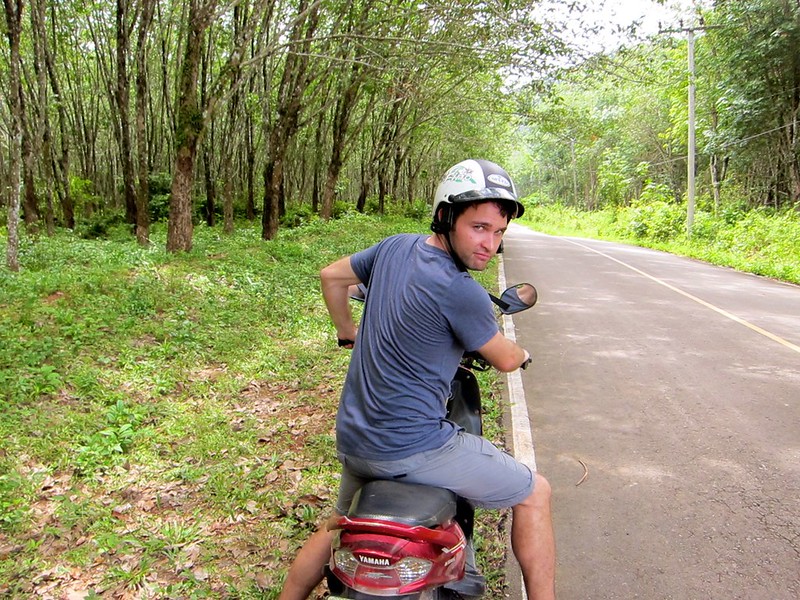 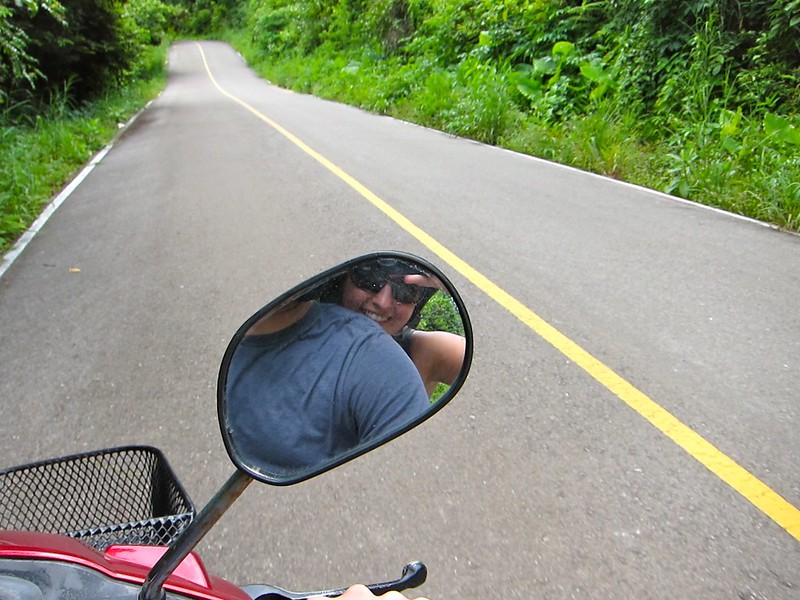 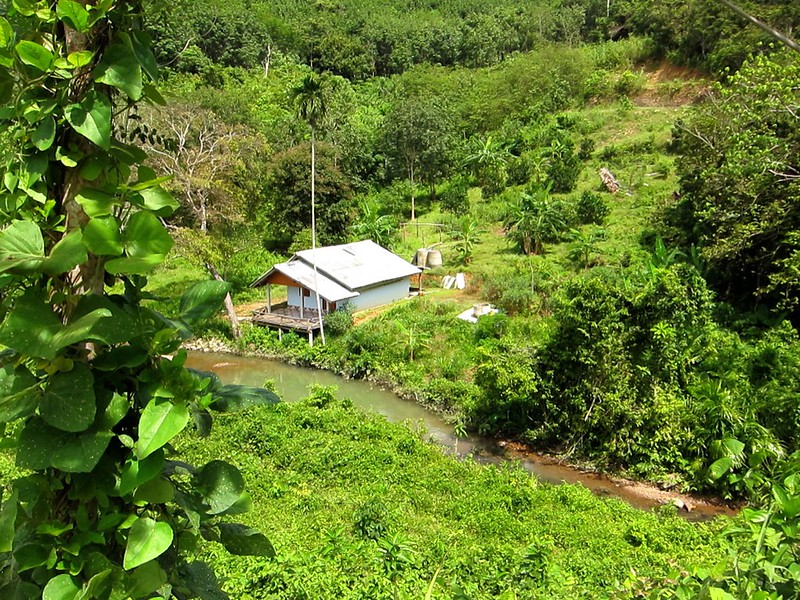 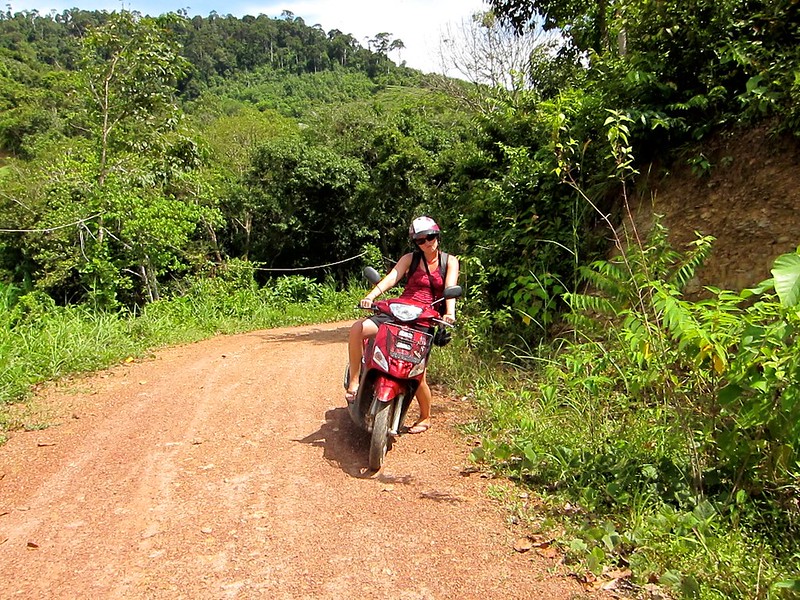 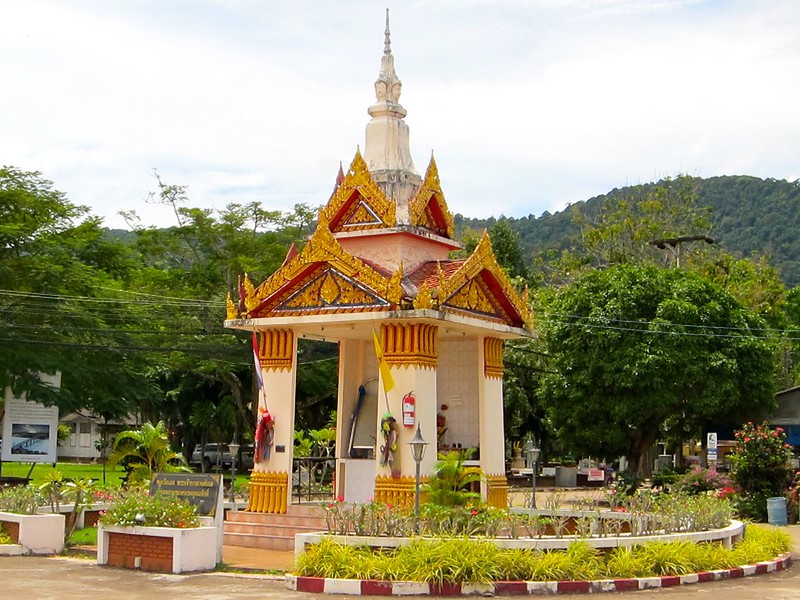 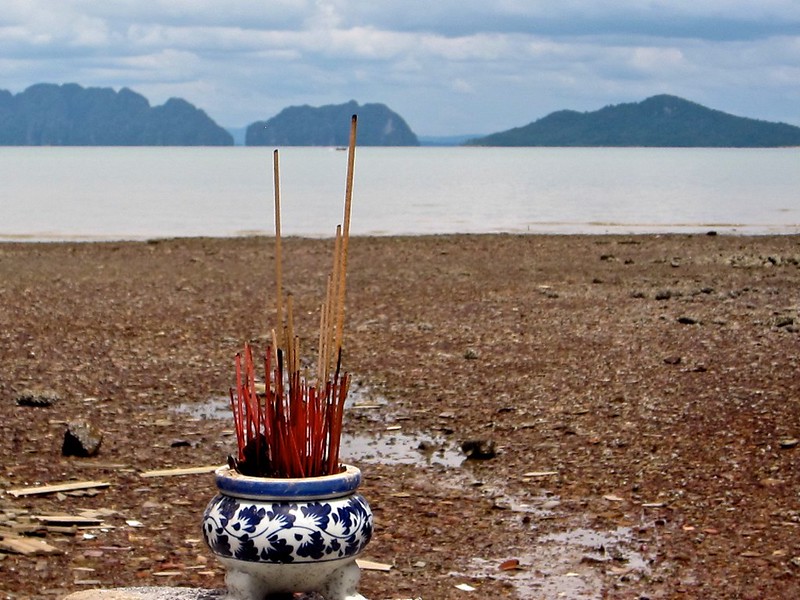 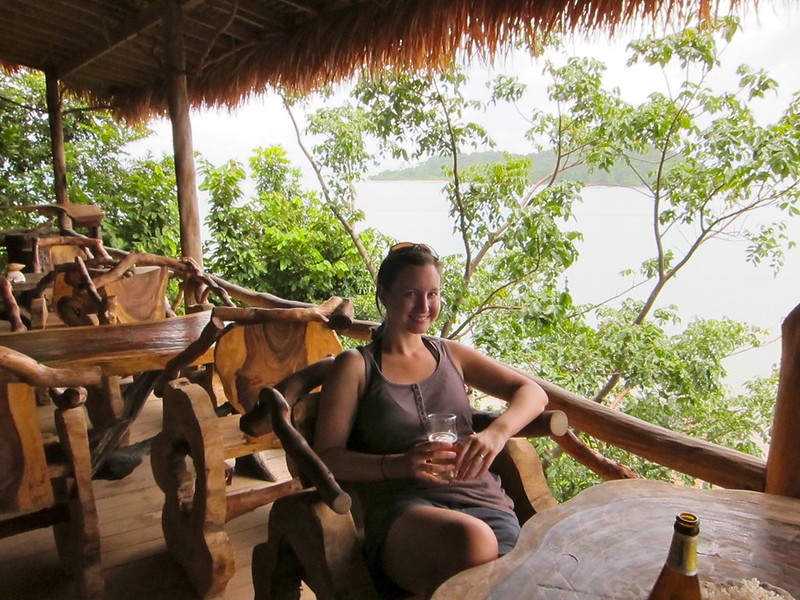 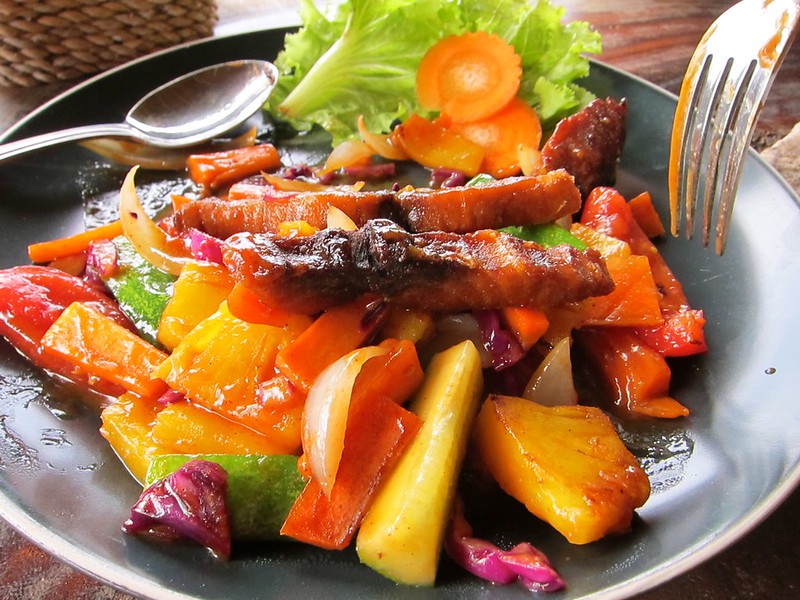 Caught in the daily downpour:

We had been dying to see a Muay Thai (Thai boxing fight), and spent a while trying to find the stadium. Eventually find it by a total struck of good luck– unfortunately, they don’t start up the fights until the high season in November. We were at least allowed to look around the training ring.

During our week on the island, we ate some pretty amazing food–

“green pancakes”, made of flour, eggs, condensed milk, a green herb that is supposed to have healing properties. The “pancake” is slapped out by hand into a crepe-like shape and then thrown onto a hot griddle.  It’s filled with fruit or an egg, folded into a square, and then drizzled with more sweetened condensed milk and chocolate…. what could be bad about that?:)

But our favorite restaurant during the week was called “Cha Cha Restaurant”– a nondescript restaurant in front of the cook/owner’s home…. definitely the least outwardly “cute” or decorated restaurant within half a mile, serving some of the best food I’ve probably ever eaten. My $2 bowl of massaman curry with sweet potatoes was heaven–the best dish I’ve ever eaten. This place was so good we ate there 3 times, and regretted every time that we didn’t.  🙂  Go now. Seriously. 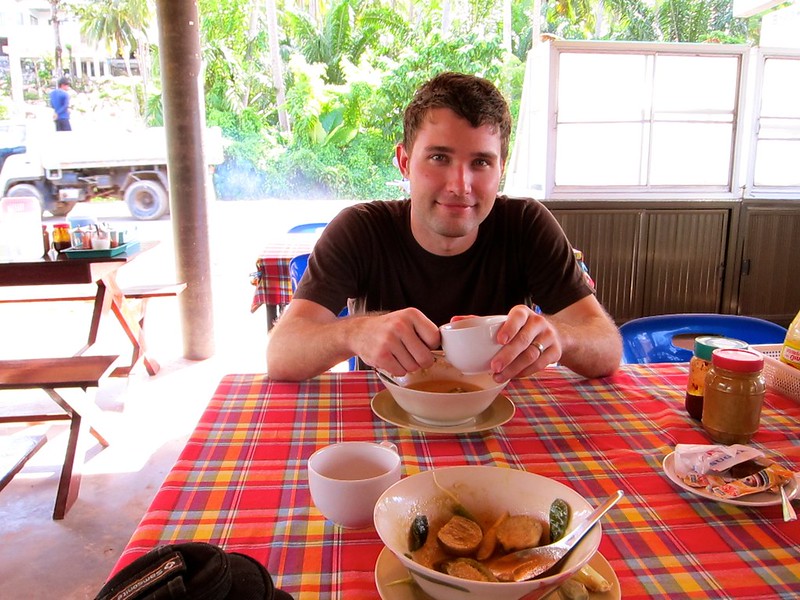 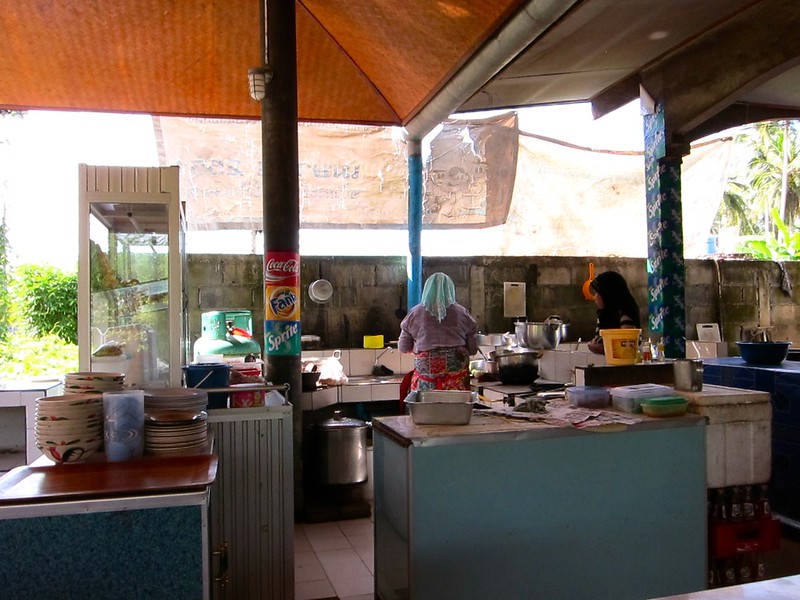 If the culture on Ko Lanta could not possibly get more interesting, I should add that the island is also home to so-called “Sea Gypsies” (their term), who are indigenous people who live in the South of the Island.  Their dialect was extremely different, being very staccato, with lots of clucks and clicks of the tongue.  At one point during our motorbike ride, we accidentally came across one of their burial grounds— shallow graves with individual tin roofs placed over each grave, a plate of food left by the grave by loved ones as an offering.

When we weren’t motor-scooting around, most of our time was spent talking with our hosts, reading our books, lounging at the beach… But on our final day on Ko Lanta, we took a snorkeling tour of the various islands south of Ko Lanta on a longtail boat, a hideously loud contraption with a car engine (I think?) for a motor: 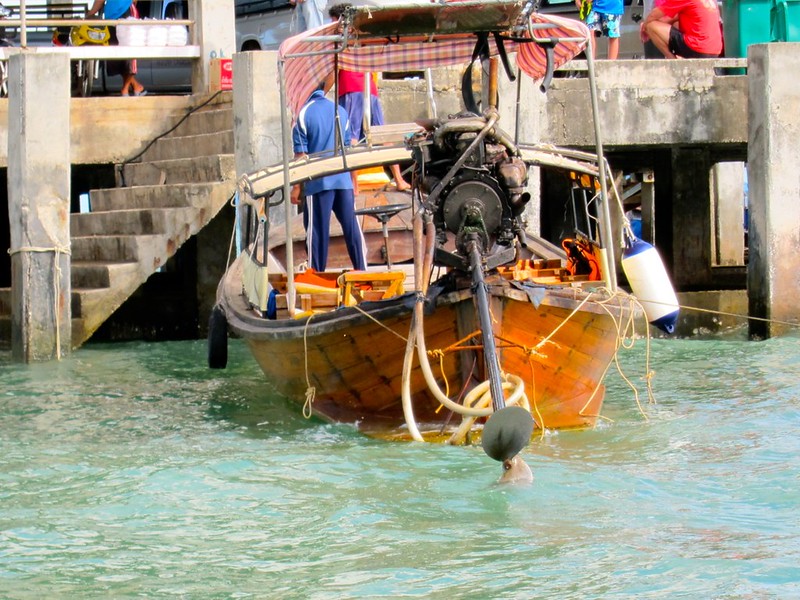 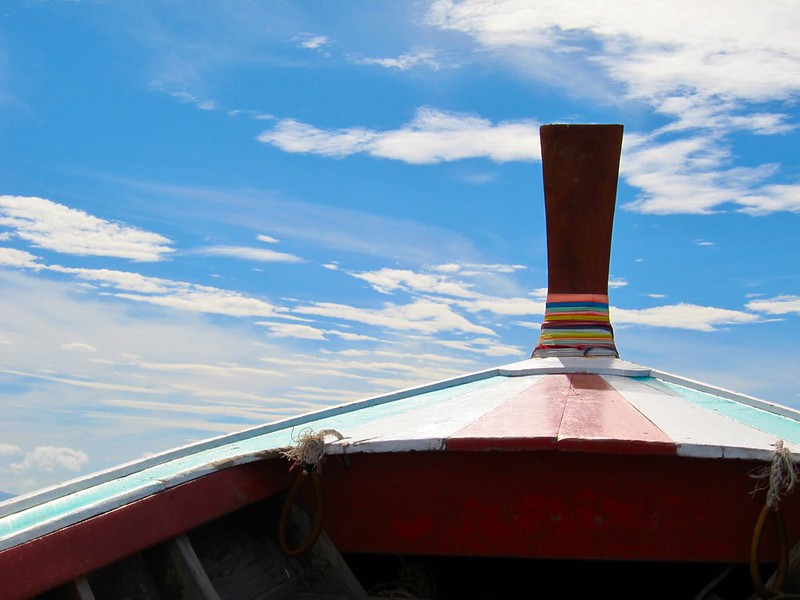 Swimming in front of a limestone karst: 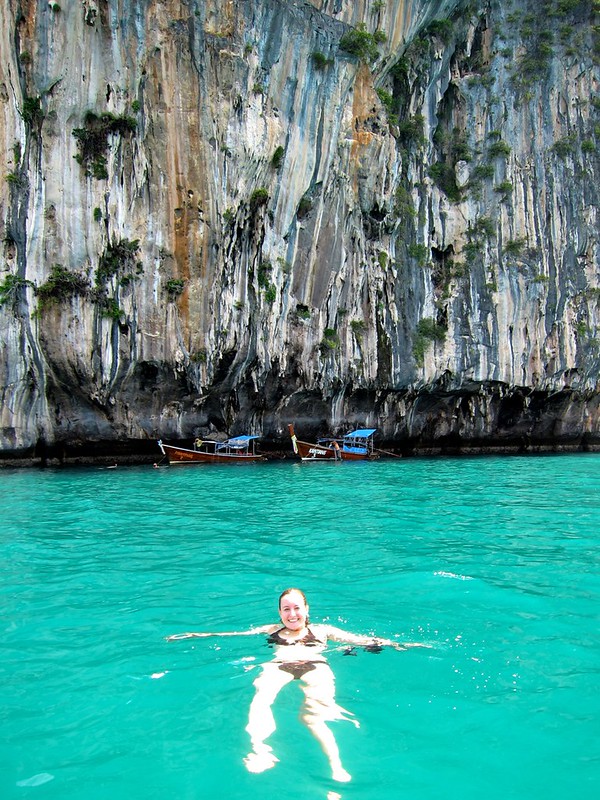 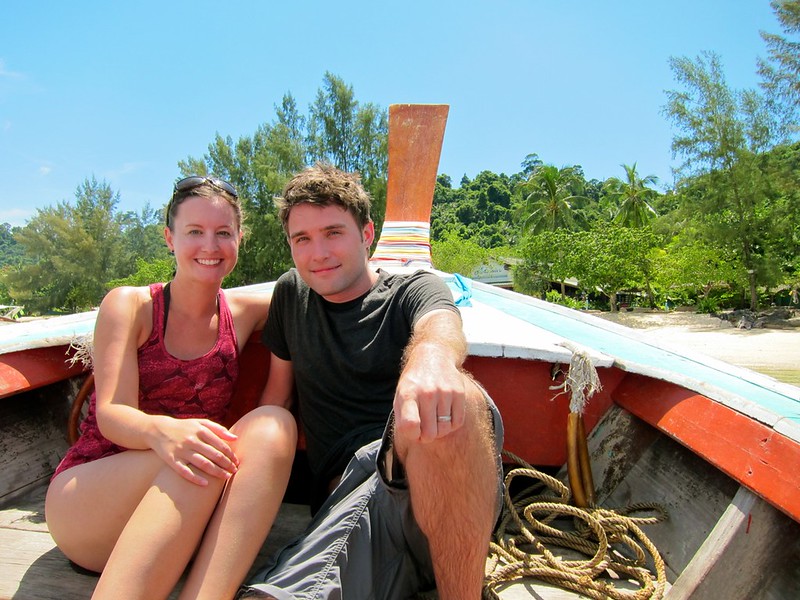 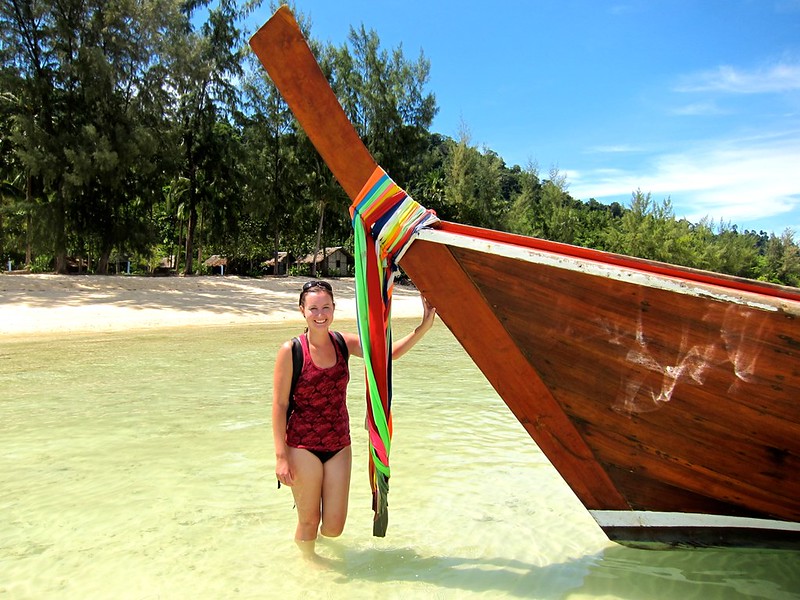 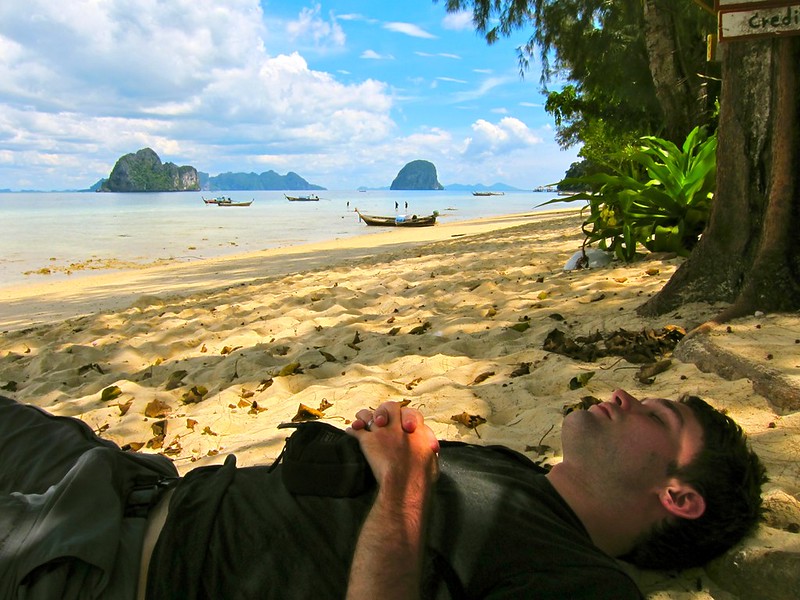 The highlight of the snorkeling trip was a site called the “Emerald Cave”, which you can swim into during low-tide. When we arrived at the entrance, we were told to strap on a life jacket and swim into the cave, following the flashlight of our beanie-wearing, fully-clothed guide. Because none of our guides spoke English, we didn’t know what to expect and we were not told anything about the cave–  we thought we were just there to swim in, see the stalag -tites/-mites and swim out again. The stalag -tites/-mites were amazing, but we had no idea what was ahead. We just kept swimming toward the beam of the flashlight, deeper and deeper into the cave, at one point the warm waters becoming frigid for the lack of sunlight.

Eventually, we began to see light at the other end. We thought it was the other end of the cave looping back around to the outside ocean. Instead, we crawled out onto an emerald green crescent of white beach, completely surrounded by 100-foot high walls of solid rock, covered in dripping green rainforest—we were in a blowhole of a volcano, in the middle of the island.  A sign told us that the spot was once use as a place for pirates to hide their treasure and is now protected as a national park.

Its beauty is difficult to describe– truly a magical, almost unworldly and holy place.  And because we had to swim through the cave to reach it, we have no pictures of it, and now its memory exists only in our minds.:)

At the end of our week on Ko Lanta, we took some pics with our host family, saw some amazing sunsets, said goodbye to Ko Lanta!