On our last day in India, we visited the most romantic, most admired, most lavish declaration of love in India, and maybe the world: the Taj Mahal. Despite seeing photos of the architectural masterpiece my entire life, I had never learned the story behind the Taj until today…

[Anxiously awaiting the train for a day-trip to Agra, home of the Taj Mahal…] 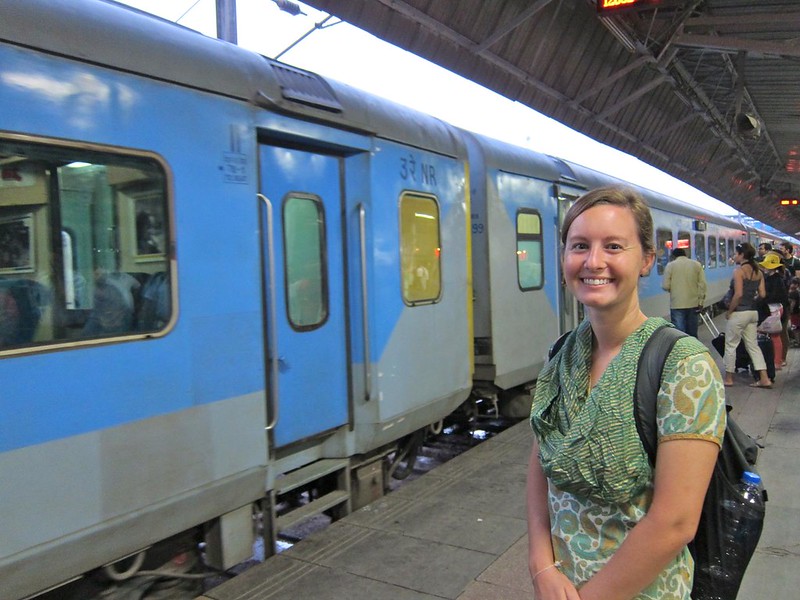 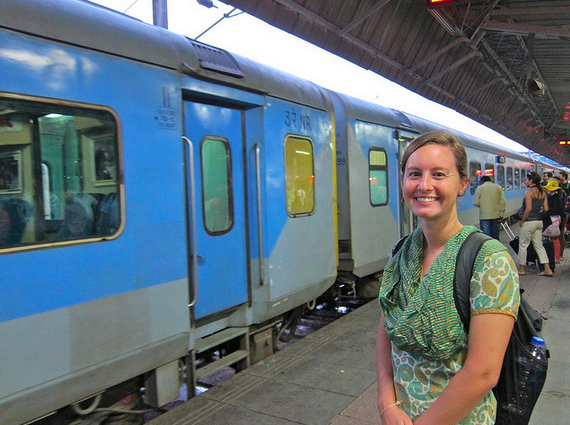 Built in 1632, the Taj Mahal is a symbol of the love that the Mughal emperor Shah Jahan had for his third (and favorite) wife, Mumtaz Muhal. During the birth of their 14th child, Mumtaz died, and Shah Jahan went into mourning for a year. When he finally emerged, he built the Taj Mahal as Mumtaz’s final resting place. After spending so much of the empire’s money to build the Taj (and threatening to build a duplicate black version of the Taj Mahal for his own tomb!), Shah Jahan’s son sent his father to prison in Agra Fort, where Shah Jahan was able to gaze out his prison window at his wife’s mausoleum until his death. Although there were originally no plans for Shah Jahan’s body to be placed inside the Taj Mahal, his son extended him the courtesy of burying Shah Jahan beside his wife, where he remains today.

When we arrived in Agra (the city where the building is located), I was unsure whether I would really be moved by my first sight of the Taj Mahal. As we entered the courtyard and rounded the corner of the gardens, it appeared in the near-distance through an archway… and took my breath away. It was more beautiful than I had imagined. Against the perfect blue sky, it almost looked fake, exactly like the flat, hazy pictures of it that had formed my only memory of it until now. 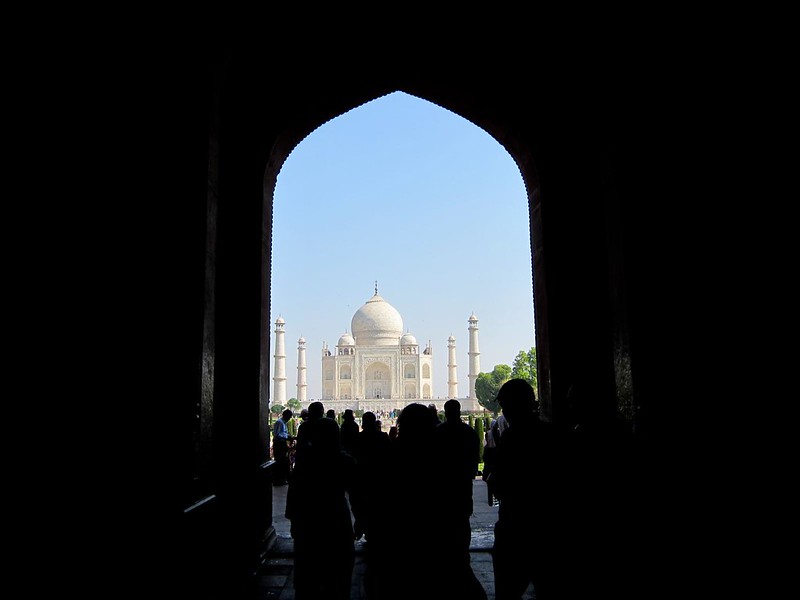 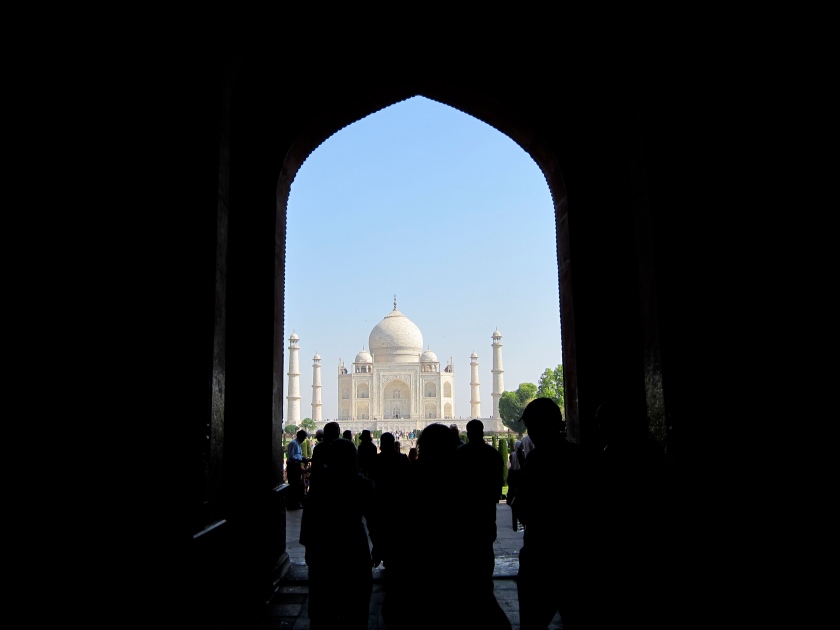 Just inside the inner arch, dozens of people, mostly Indians, were taking family photos in front of the monument and pretending to “hold” the top minaret of the building: 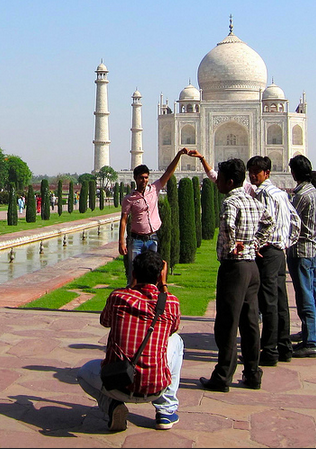 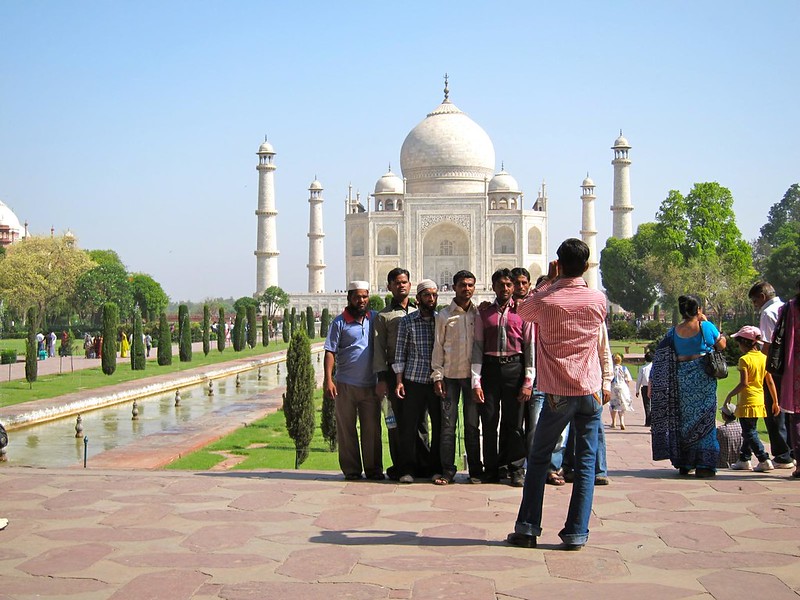 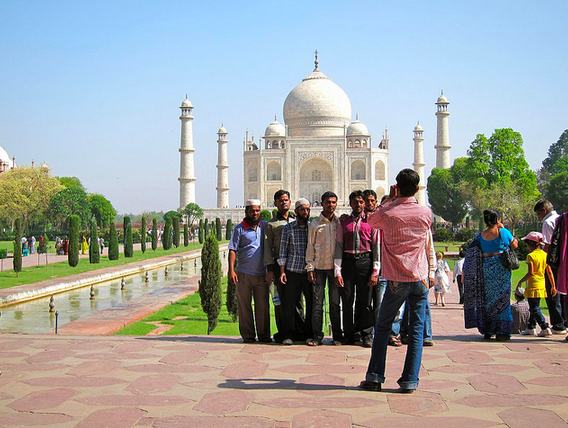 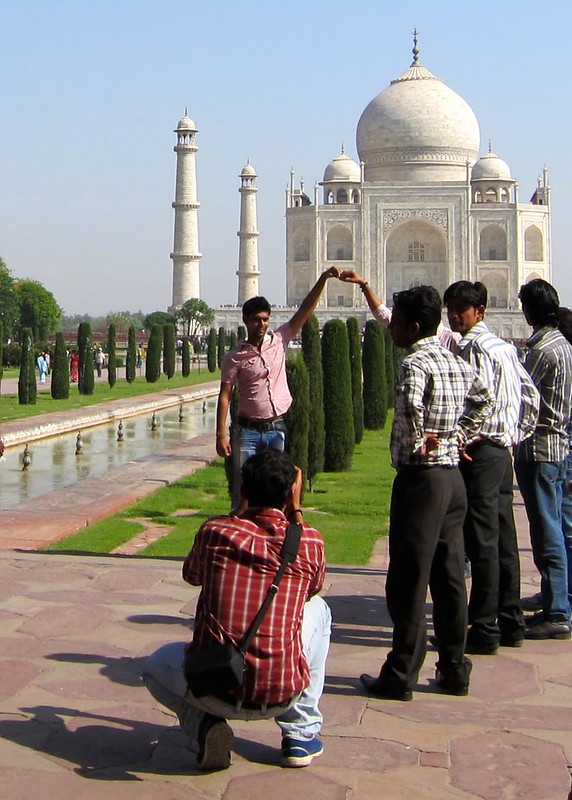 I love the above pictures because, throughout our trip, we often felt too intrusive to take photos of the local people, and thus, we have very few pictures of the people that we were interacting with. These pictures capture so perfectly the true nature of my now-fading memory of many of the Indian men that we met, in terms of their style of dress, appearance, and [sometimes quirky] personalities. 🙂

[Note: the photo below is not a photo back-drop; we were really there.] 🙂 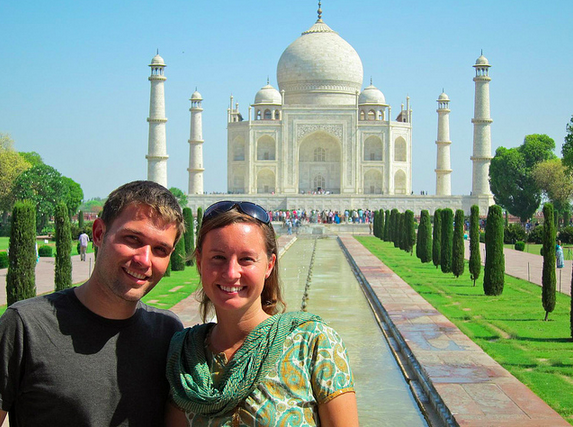 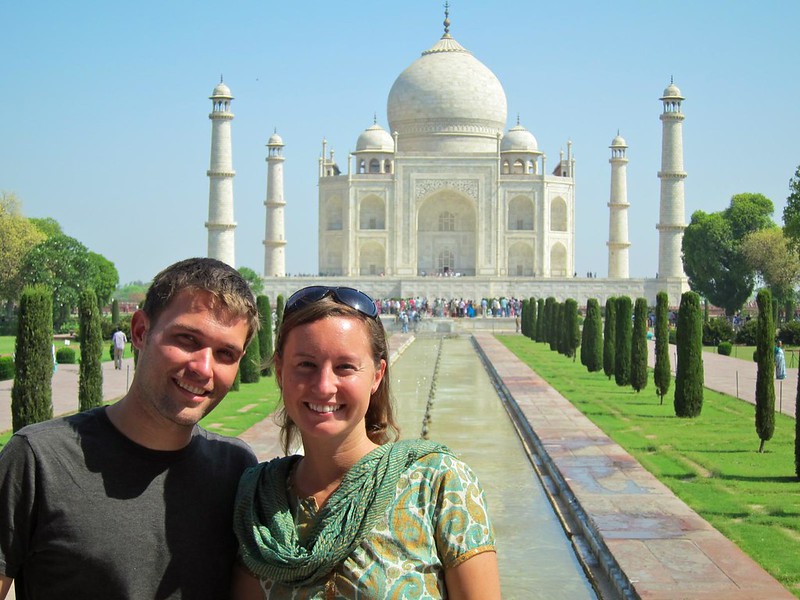 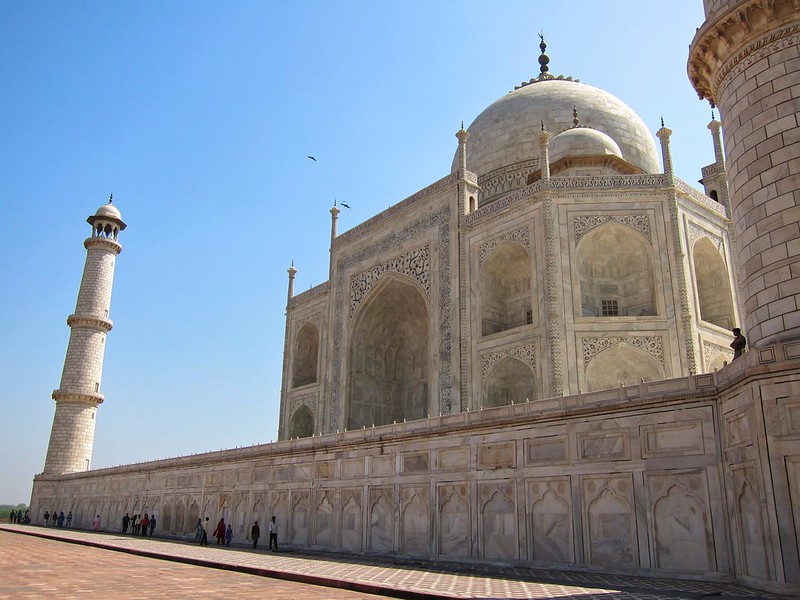 We were surprised to learn that the Taj Mahal, which is built entirely of white marble with inlaid jasper, jade, crystal, and turquoise from all over the Eastern world, is covered in black Arabic writing that depicts over 14 chapters of the Quran, some of which are read as part of Islamic funeral ceremonies. 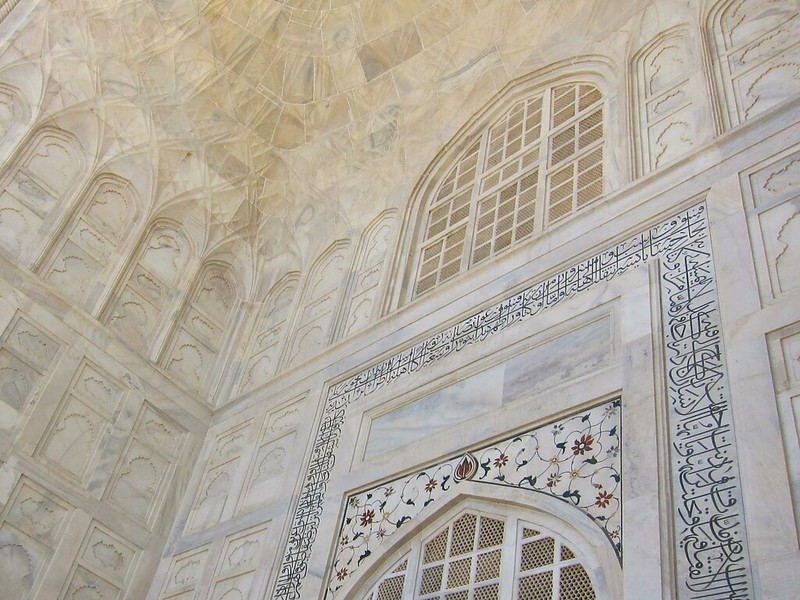 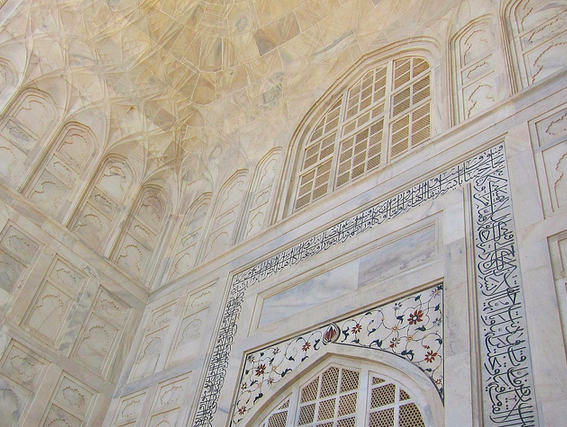 [Us doning our cloth booties, which everyone is required to wear to protect the Taj’s pristine white marble floor.] 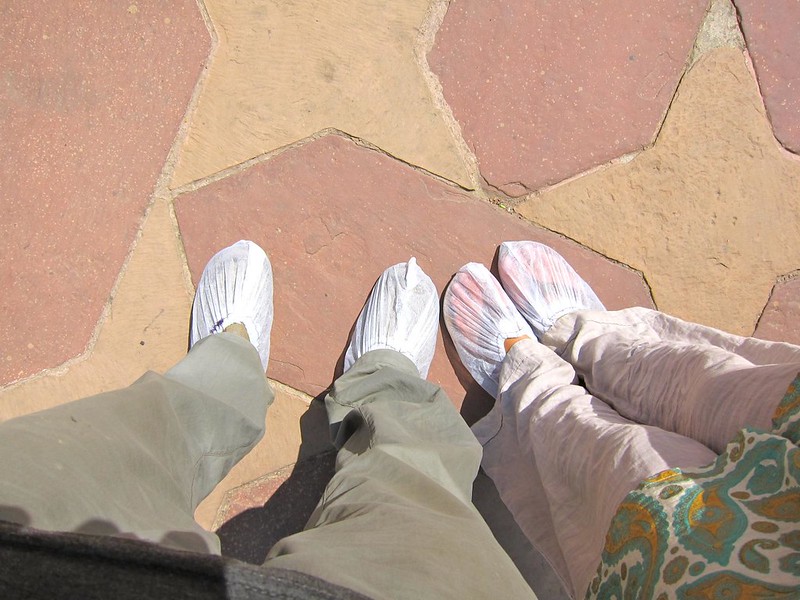 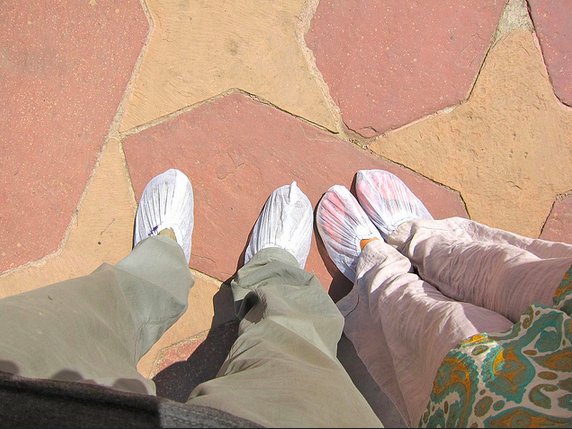 Before we entered the building, we sat in the shade of one of its minarets and listened to the audio tour that we had picked up out front.

But before long, I had embarrassingly become the main attraction for other tourists at the site…. 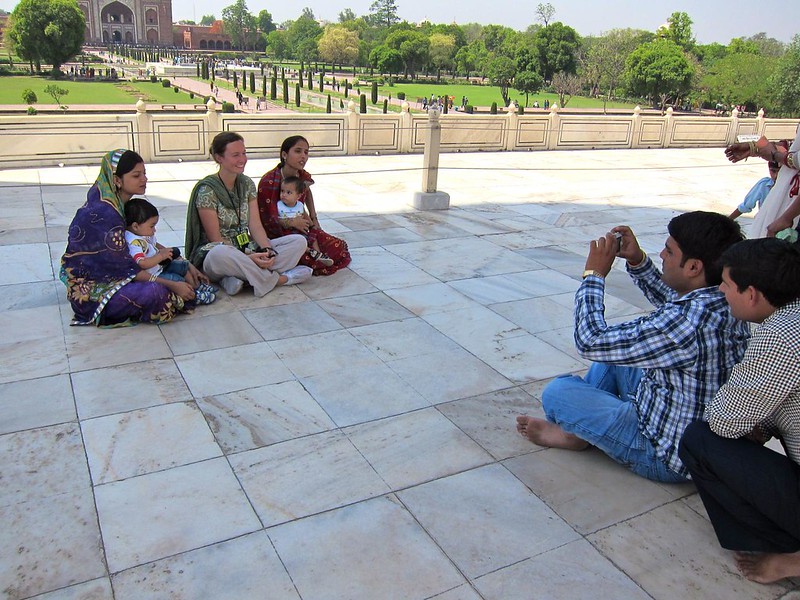 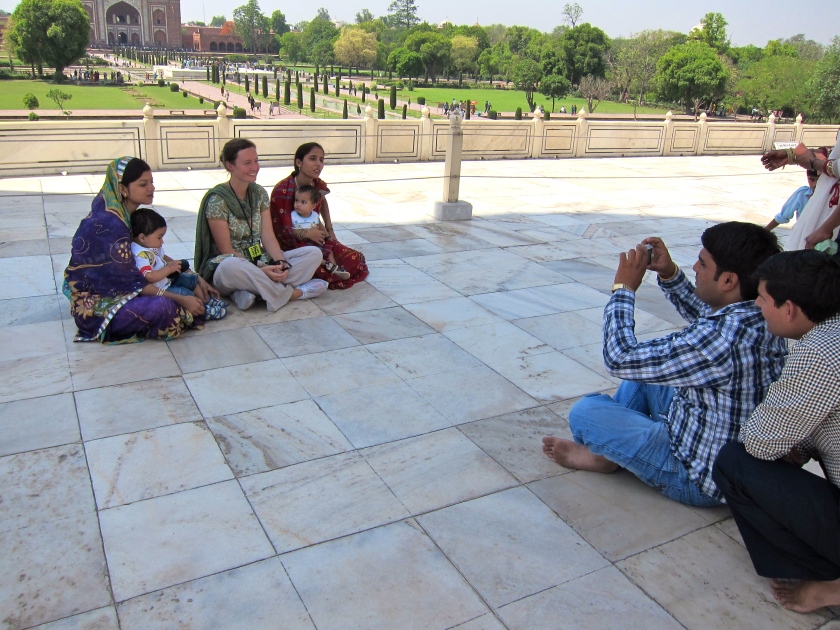 As I peacefully sat trying to listen to my audio tour, increasingly more and more people started appearing in my quiet little corner and asking to take their picture with me. One lady even placed her baby in my lap and then stood next to me for what must have been a 5-minute photoshoot! Although Scott didn’t get a picture during the peak of the craziness, we easily had 15 people gathered into the frame at one point, with at least that many more people looking on. 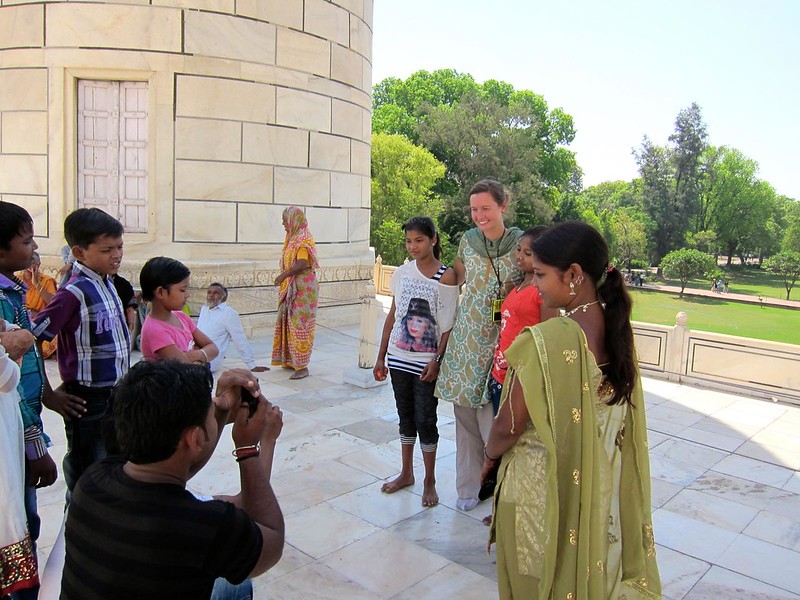 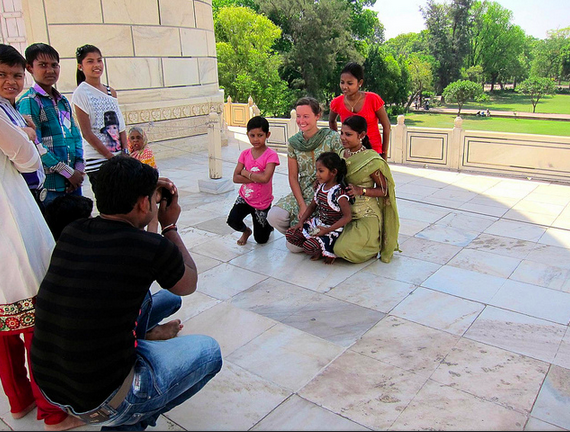 Although I didn’t really mind posing with them (even though my cheek muscles would beg to differ), eventually the Taj Mahal’s security guard left his post to disperse the crowd that had gathered around me– although some of them still managed to sneak in a few more photos before dispersing… 🙂

On the other side of things, this little dude jokingly would not get out of the frame of my picture until I took his photo….so I did: 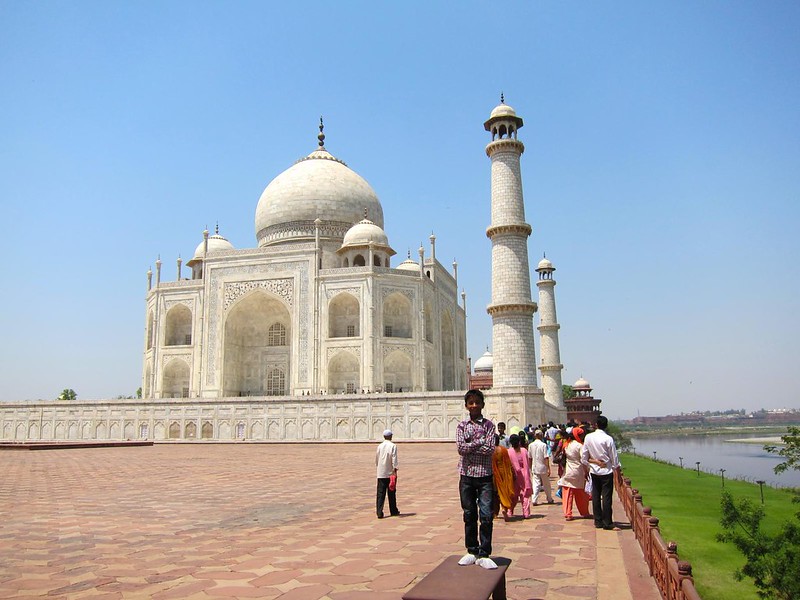 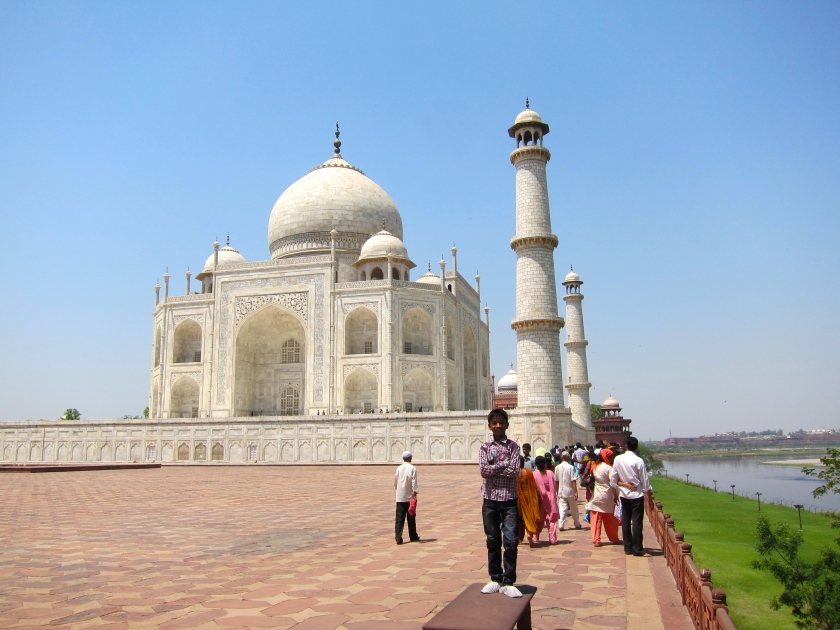 ..and we still managed to get some cool shots without any people at all… 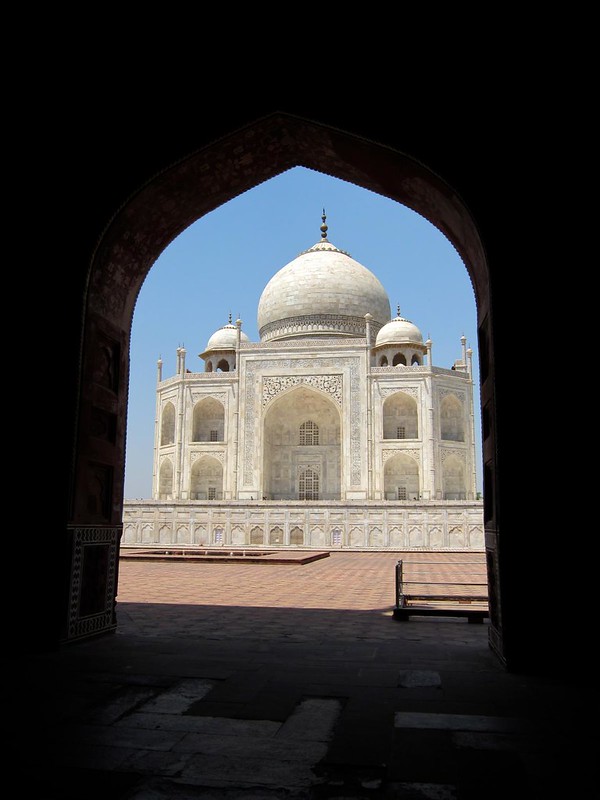 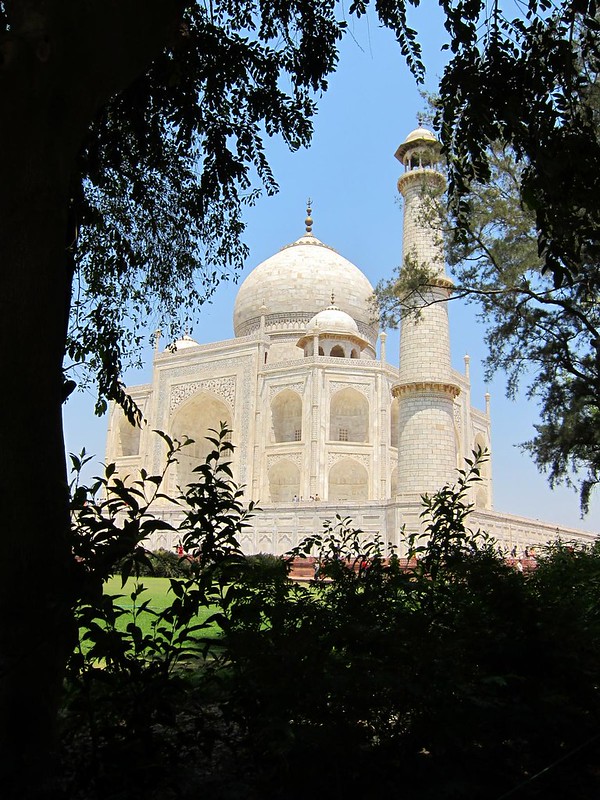 When we entered the main mausoleum, we found ourselves in a large circular room with a large sarcophagus centered in the middle, the tomb of Mumtaz. In their quest to construct a perfect building, the Mughals built the Taj Mahal to be perfectly symmetrical– and it is, save for the sarcophagus of Shah Jahan that now sits just to the left of his wife (Jahan never intended for himself to be laid to rest there). Keeping with the symmetry of the building, the only way to view the tombs is to complete a perfect clockwise circle around the lovebirds and then exit the same way you entered.

After we left the main mausoleum, we decided to simply spend the day lounging in front of the Taj. We found some empty benches, pulled out our books, and just relaxed. 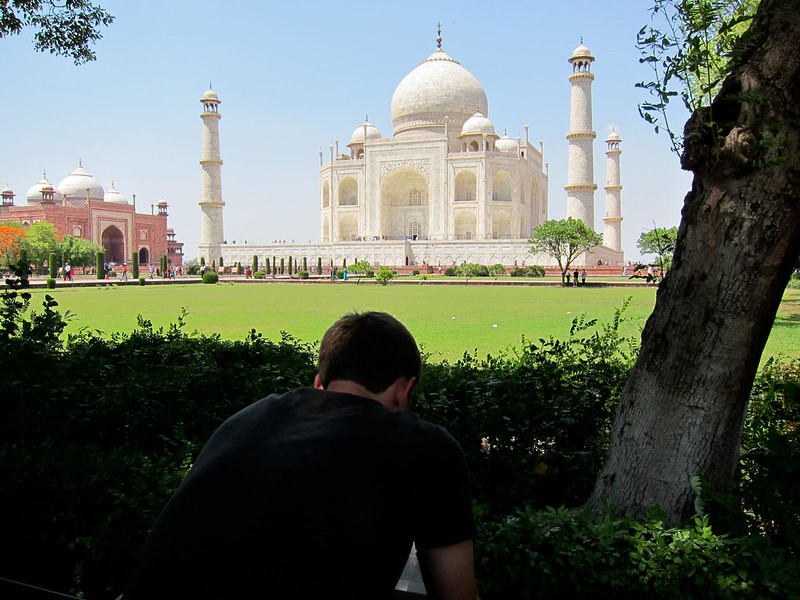 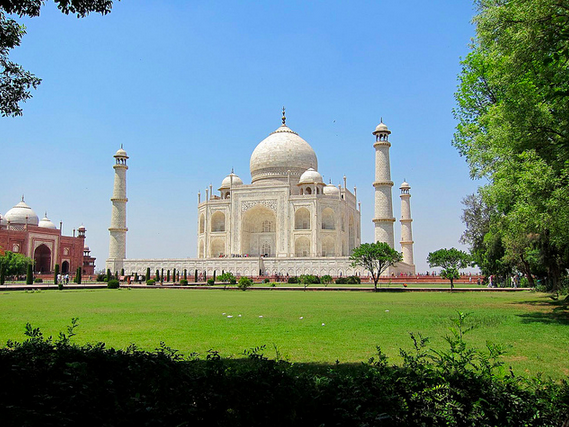 Of course, in typical fashion, less than 10 minutes later three Indian guys had appeared on the bench next to us and were eager for some English practice. We talked about politics, the U.S., how we liked India, what book Scott had in his hand (Rushdie’s “Midnight’s Children”)…. Needless to say, we didn’t get any reading done, and by 4pm we were on our way back to the Agra train station and on our way to Delhi, where we would fly to Nepal the next day.

The Taj proved a magnificent way to end our 6-week tour of India, and we found it almost ironic that our last day and last morning in India were the easiest and most peaceful of our entire hectic 6 weeks there….

But not to let us go easily, India had one more trick up its sleeve, which reared its head during the first 2 minutes of our flight on Air India bound for Nepal. Our flight took off into a violent lighting storm and went through a series of terrifying drops and arcs while we were still very close to the ground. Scott was sitting one seat behind me, and we clung to each others’ sweaty hands through the opening in the seats, as others throughout the plane screamed with each drop. My entire body was filled with a level of anxiety I can’t describe or even remember now, and I kept thinking “It’s not worth it, it’s not worth it, just let me get home this one last time.” After we had passed through the worst of the drops, Scott asked me for a piece of paper and a pen.  A few minutes later, he slipped me a note between the seats. It was a love note… and although I’ll always keep it private and safe, I thought it was poignant to this post that he mentioned that as we were bouncing around in the sky, the thought occurred to him that if we hadn’t “made it”, our family back home would have found it fitting that we had spent our last day together at the Taj Mahal, the ultimate testament to love.  Fortunately of course, we would indeed survive another day.  (To pester them mostly :))

Now, people ask me if I’ll ever go back to India. I would go, but I have a long list of other places I want to see before I would ever consider going back. I would travel to the southern, tropical part of the country and try to find some interesting new foods to try, maybe go on a trek or two. I won’t be flying Air India though, and I won’t look forward to using the public bathrooms.

India, you were a roller coaster. So long!

One thought on “A day at the Taj…”