After a week on Koh Lanta, we felt the feet beginning to itch and decided it was time to head somewhere new…. So we bid farewell to our fantastic hosts at Where Else, hired a longtail boat, and found ourselves floating down to the next island in the chain–the island of Koh Hai…  Because no ferries were  running between the islands yet (it’s still the low season here), we got to Ko Hai by jumping on board with a day-trip snorkeling tour and the captain just pulled over at the right island while we jumped off with our backpacks!

On our way to Koh Hai, we learned that most of its land is actually preserved as a national park and that the only developments on the island are for hotels – meaning that unfortunately there wouldn’t be much to explore in the way of villages and markets. With that in mind, we decided to temporally leave the backpack trail in return for some comforts – okay, there still wasn’t hot water, but aside from that, these bungalows were pretty swank… 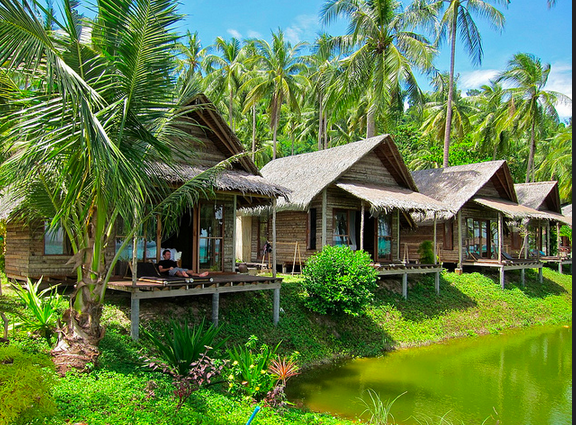 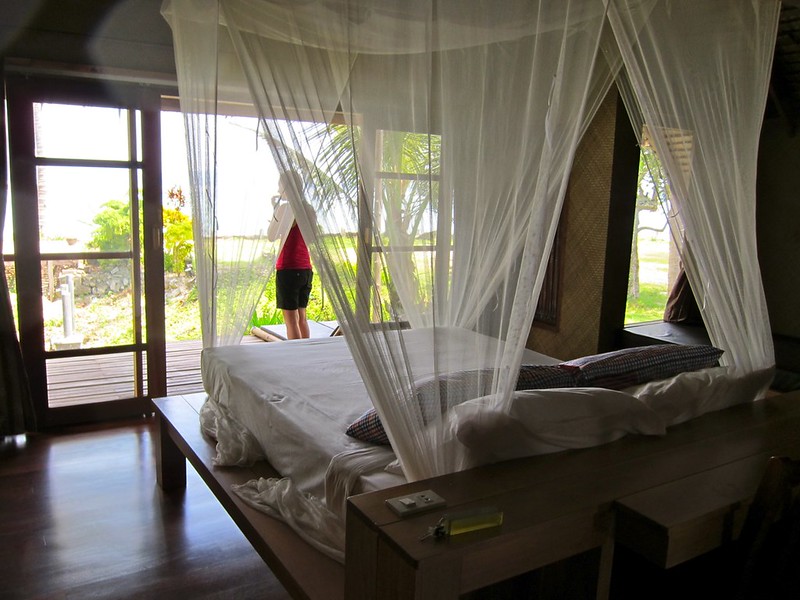 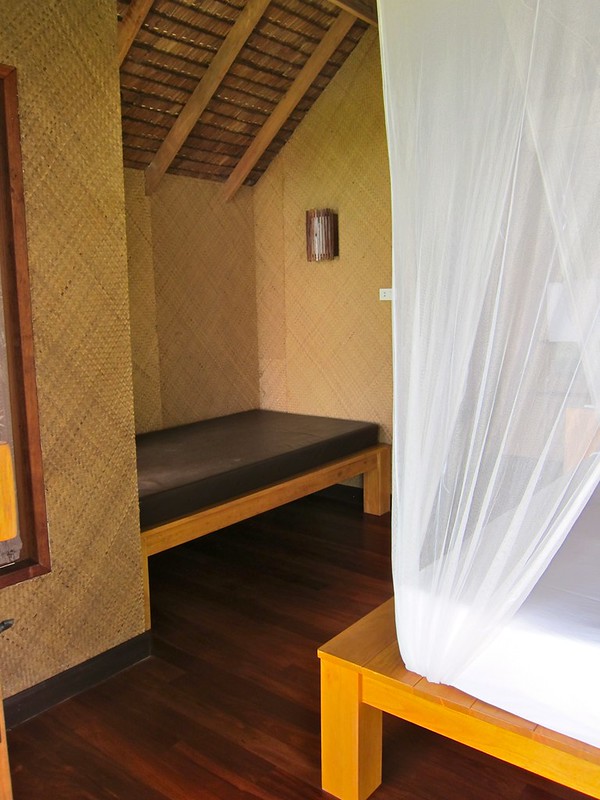 our view waking up each morning… 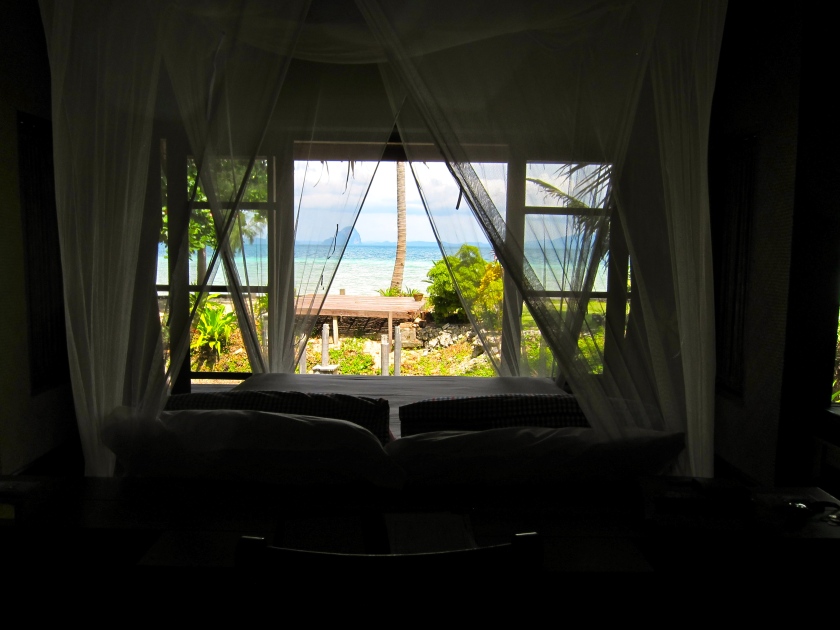 Steph out on her yoga platform:  🙂 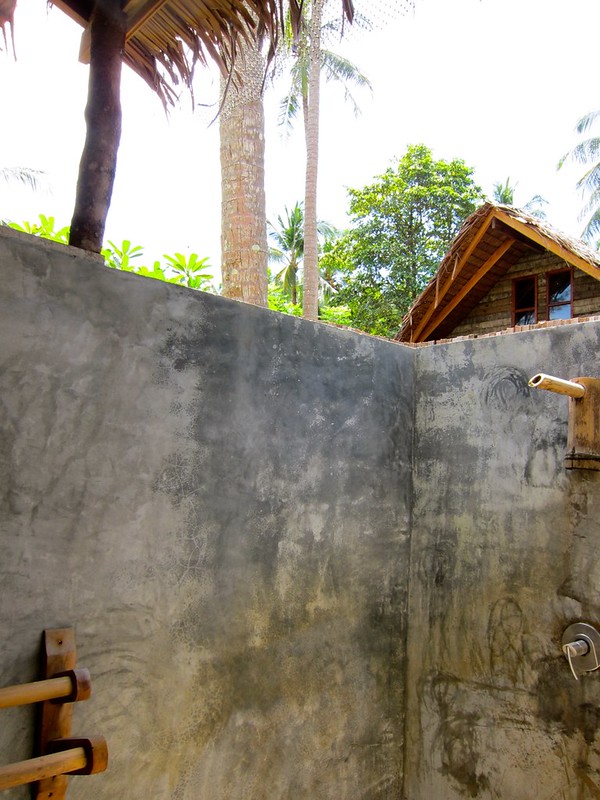 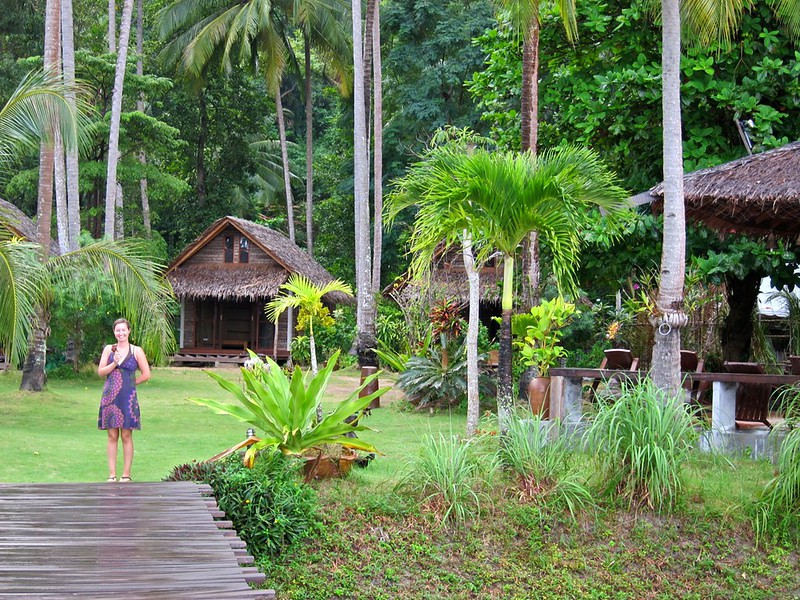 Our beach on Koh Hai faced the east towards the Thai mainland, giving us a head-on view of several limestone karsts straight off the beach: 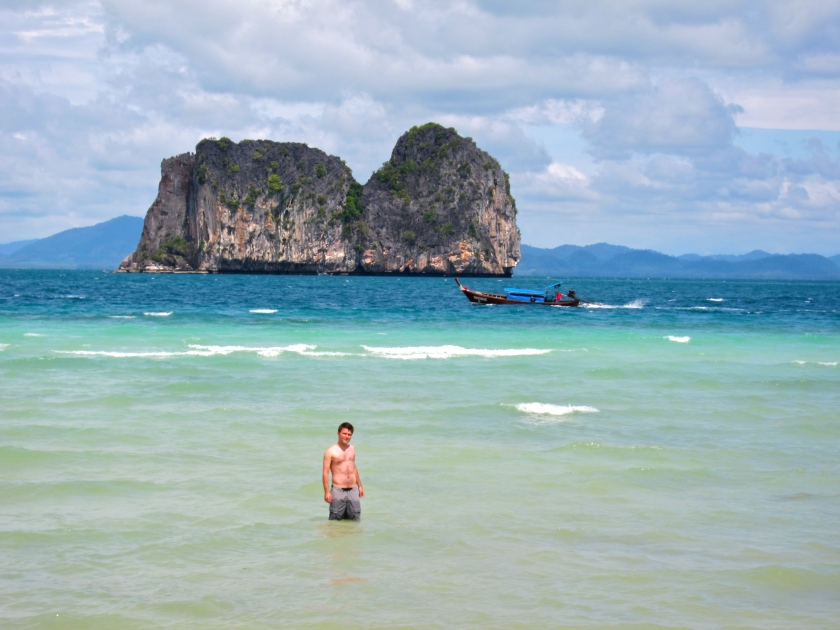 There’s not a lot to say about this place that the pics don’t say on their own…  we spent most of our time on Koh Hai reading, swimming on crystal-clear reefs, and running on the beach. Steph read in the welcome book that the hotel workers would be happy to show us how to make Thai handicrafts– she really wanted to learn how to make a lantern or an entire bungalow for our future home– instead, she learned how to make a rose out of dead leaves!!! 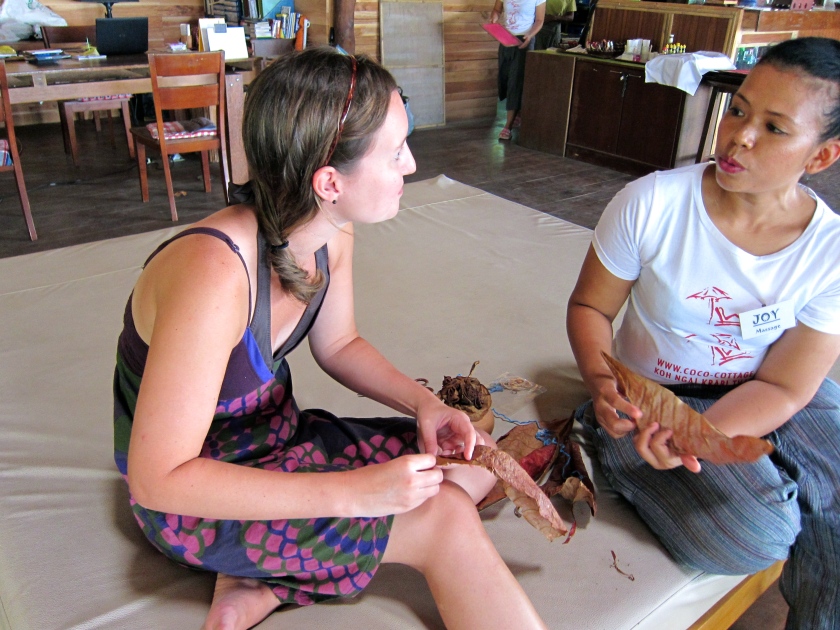 The second day, we hiked a grueling jungle trail to the other side of the island and found an entire beach all to ourselves. 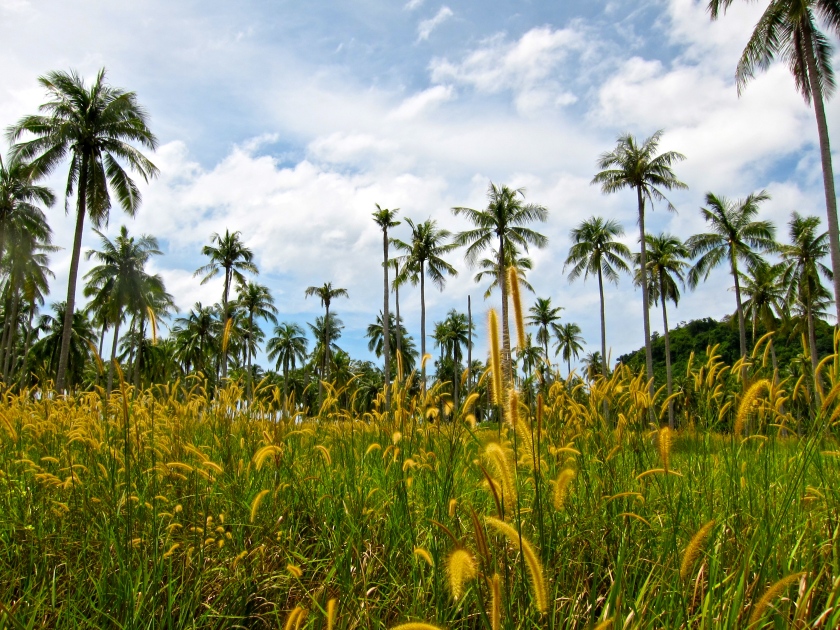 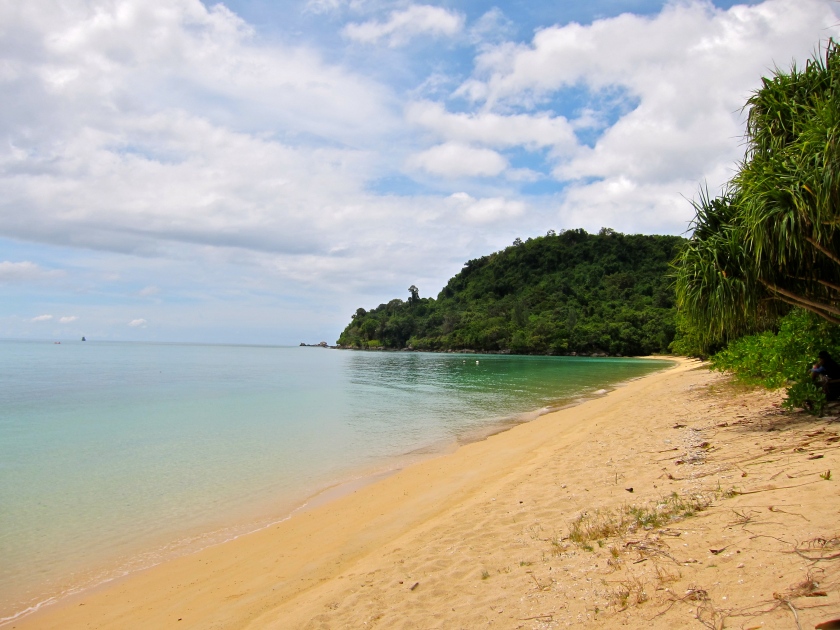 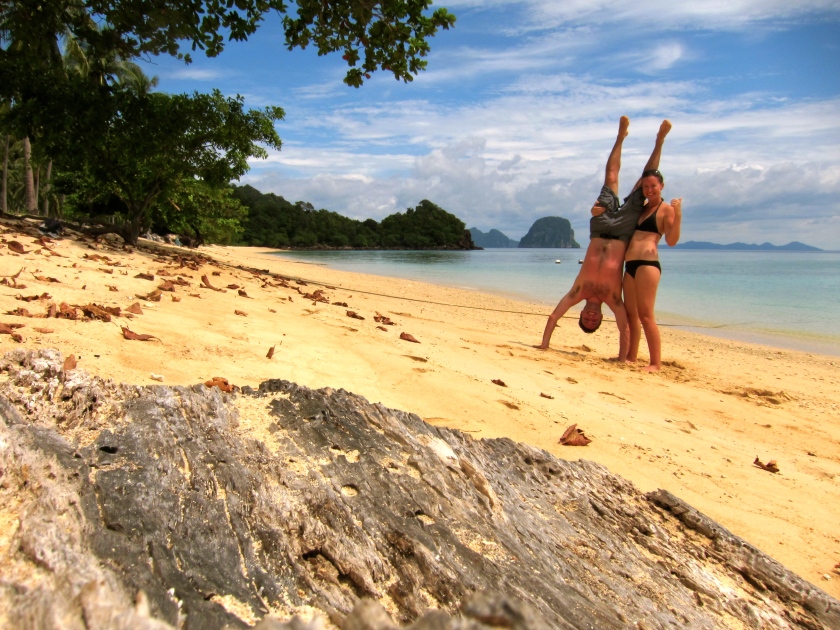 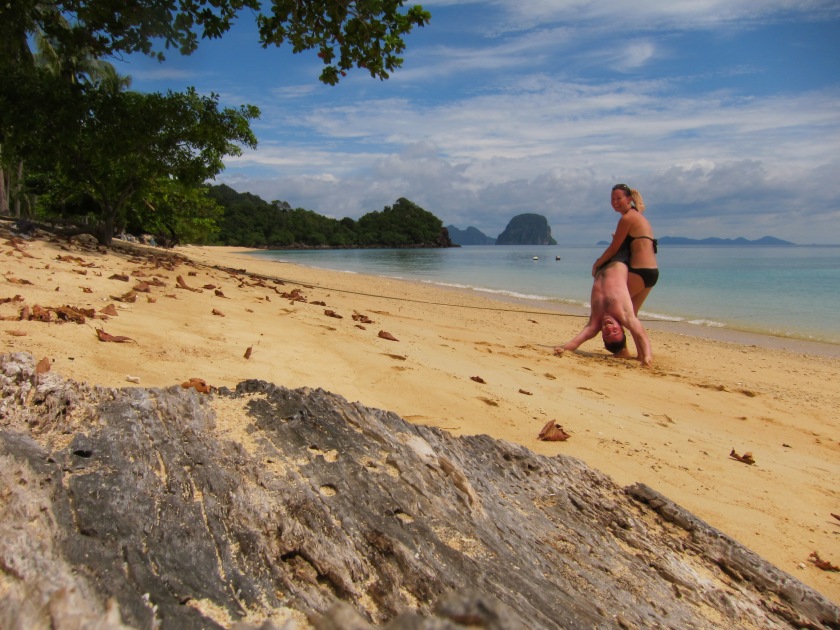 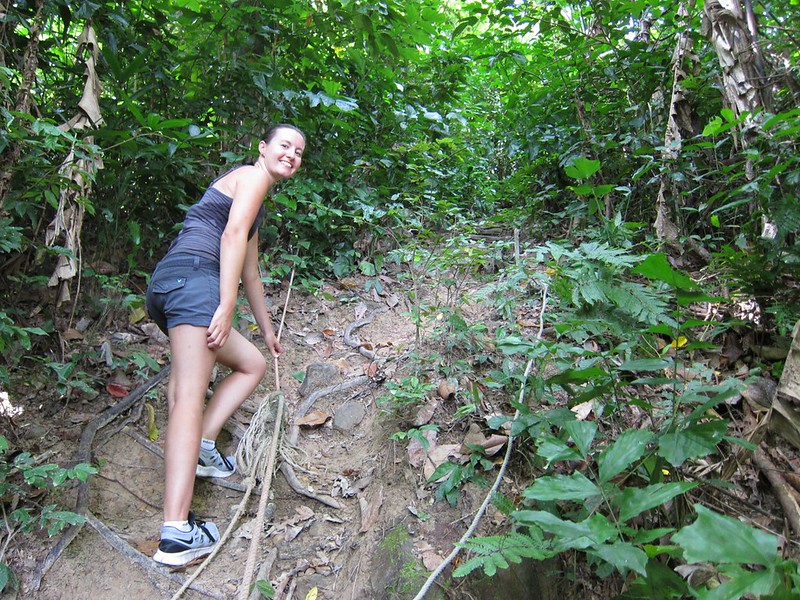 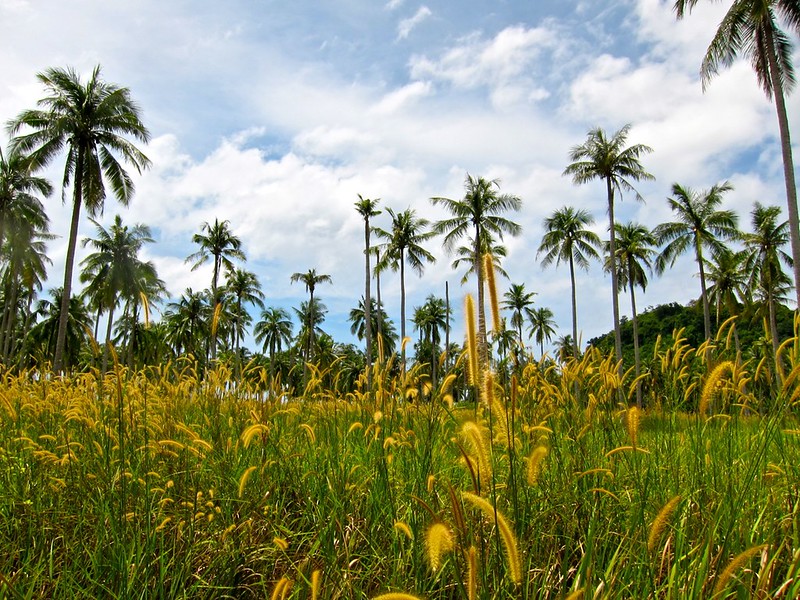 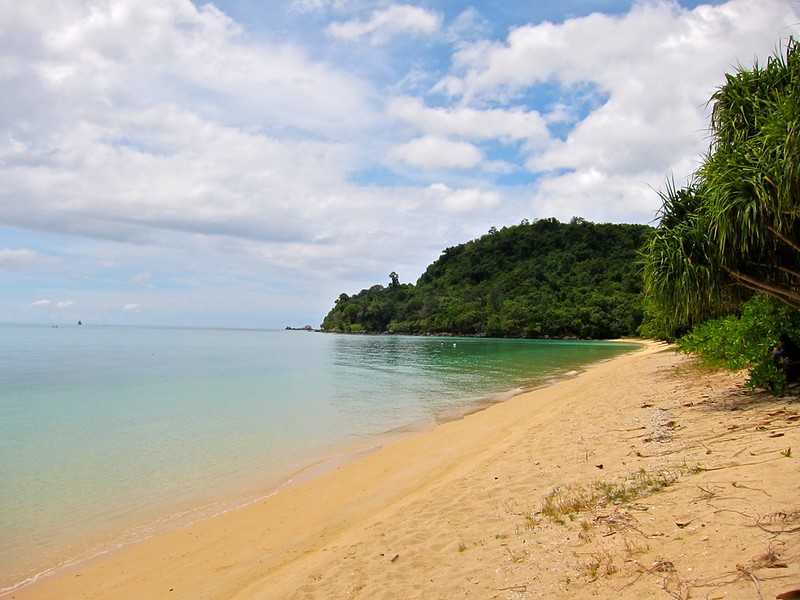 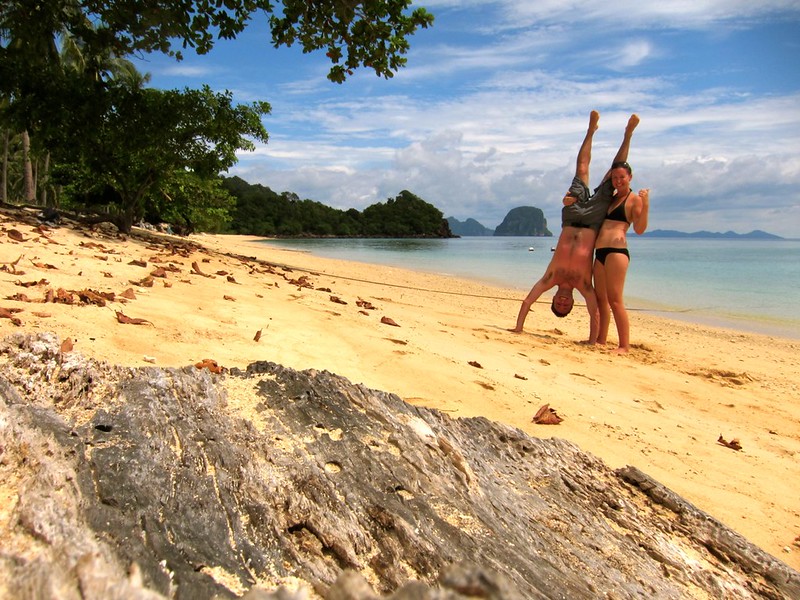 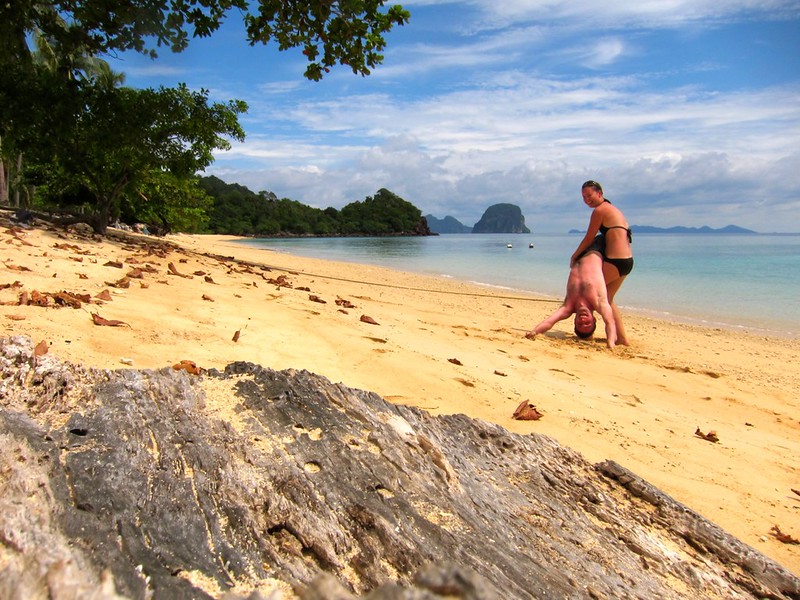 Along the trail, we came across one of the many beautiful “spirit houses” found throughout Thailand. These are often placed beside or on top of a house or business as a place for the spirits to live who were displaced by the construction of that house. 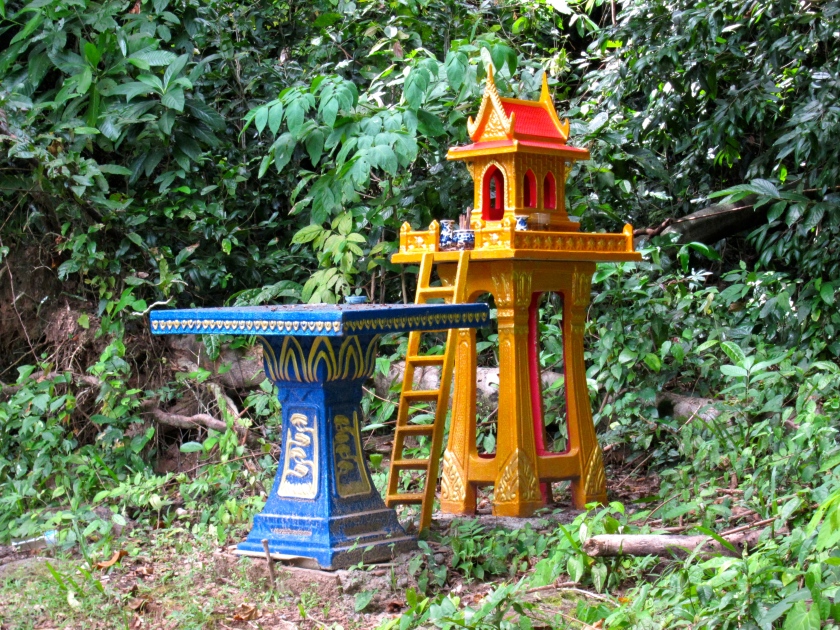 As beautiful as the day was, by the afternoon we were hot, tired, and had run out of water a long way back; the side of the island that we were hiking on was completely uninhabited, with no houses, no people, no drinkable water. Almost as if our of nowhere, we came across a Thai guy around our age who was sitting on the deserted beach; he saw us and offered up a seat and an instant cup of coffee.  A few of his friends joined us, and we sat around smiling, eventually gathering that they were park rangers for the national park that we were on. From what little we could communicate to one another, I know we established that everyone present had heard of the New York Yankees, that in America we call football “soccer,” and that boxing is big in Bangkok. Outside of that, I’m not sure what we said – we did manage to ask a husband and wife if they were siblings –  but we tried some of the Thai words we knew and the smiles we received verified that nobody was offended, at least.

On our final morning on Ko Hai, we shared a longtail transfer back to the mainland to a city called Trang. The seas were really rough, and we definitely wondered f our longtail driver would keep us afloat. We eventually made it, having received several waves right over the bow in the process. Sidenote: dry bags for any valuables (Mac laptops, for instance) are a must-have item! 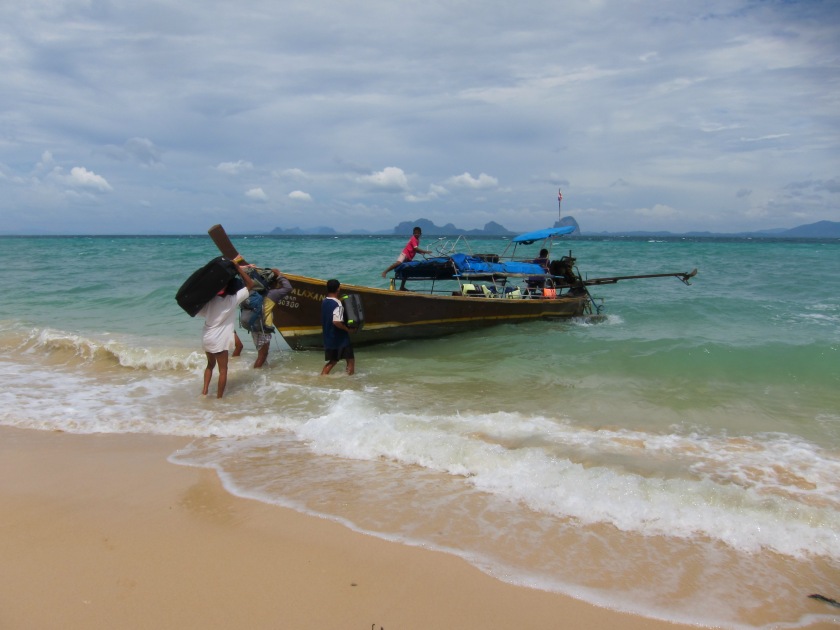 Overall, a few days very well spent, but we’re eager to get back into the thick of things. Hopefully Trang’s famed night markets will pull through in that regard. ‘Til next time!

One thought on “kOh Hai!”